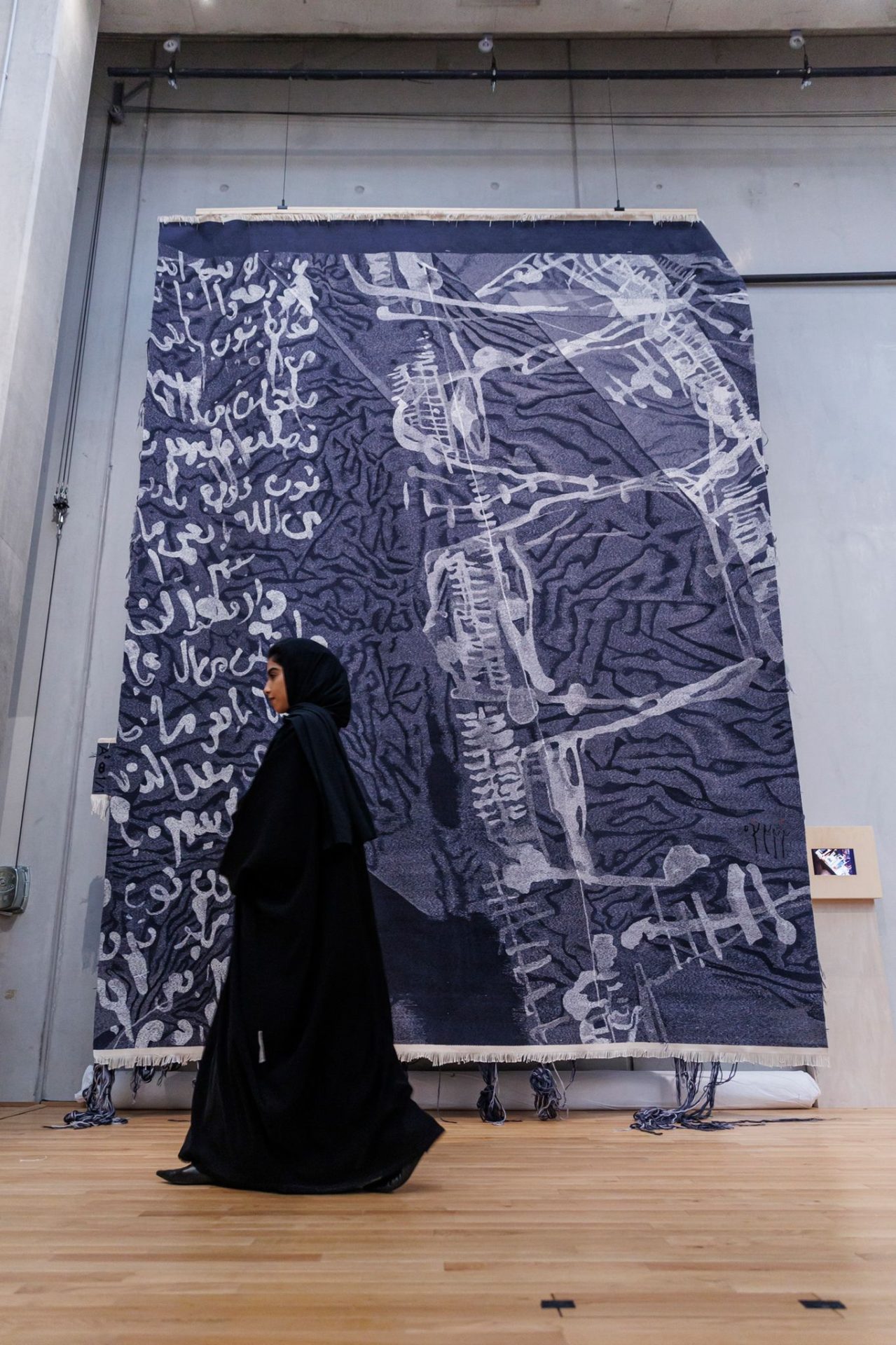 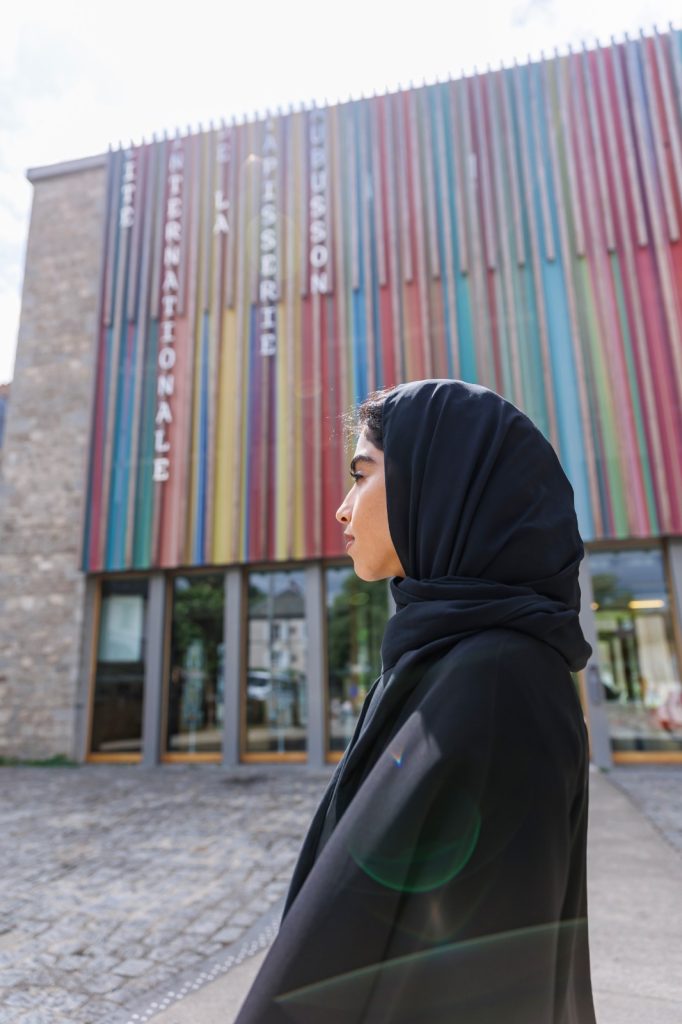 Artist Al Muftah’s work is a distinctive contemporary art that is identified by her use of contrasting black and white colours and the use of conceptual documentation to express the story of Qatar’s past through her eyes — immortalising that which was previously lost in the abyss of time.

Inspiration for “Bring them back” was derived from a traditional Qatari song “Toub Toub Ya Bahar!” which vaguely translates into “Ocean waters, repent!” Women used to sing the song as they stood by the seaside awaiting the safe return of their husbands, sons and brothers who were pearl diving. The song is passionately shouted out by women demanding the sea to remain calm to allow their family members to return home safely.

The artwork illustrates the constant echo of these women’s voices, traveling across the waters from wave to wave.

“It illustrates a part of my heritage that has diminished, and I attempt to archive it be evoking a feeling of nostalgia and allow the viewer to absorb its beauty,” says the artist, “What really drew me in were the words to this song. The fact that a local dialect is used to express these women’s feelings made it even more special to me..”

This legacy project was borne out of the collaborations established during the Qatar-France 2020 Year of Culture and was finalised to celebrate the 50-year anniversary of diplomatic relations between Qatar and the Republic of France. Years of Culture was established by Qatar Museums Chairperson Sheikha Al Mayassa Bint Hamad bin Khalifa Al Thani to promote mutual understanding, recognition and appreciation between Qatar and the world. 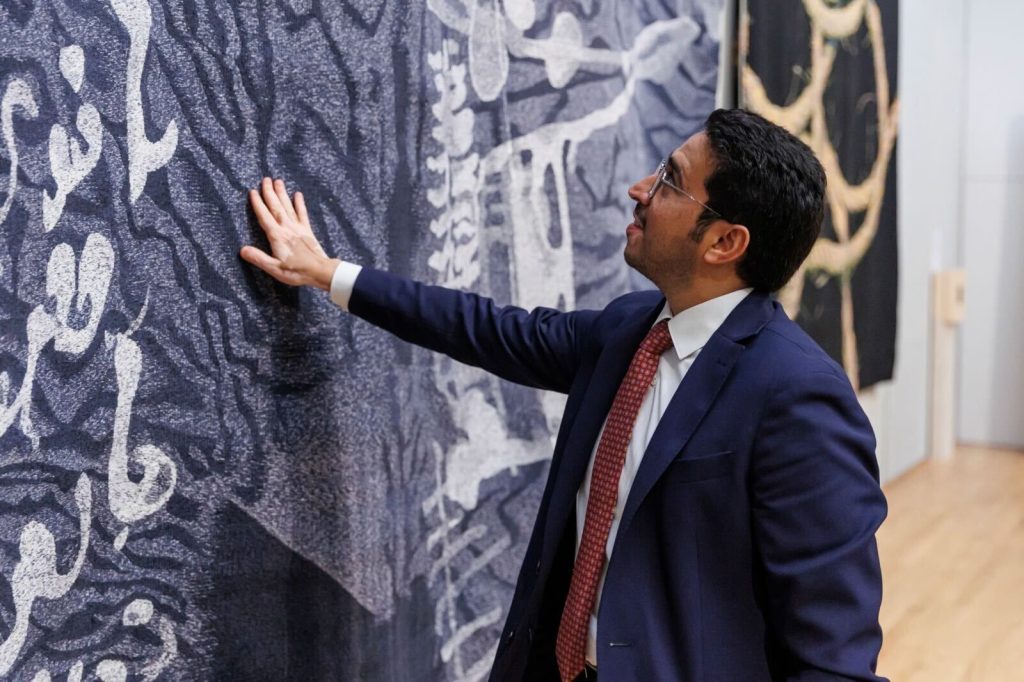 H.E. Ambassador Nasser Hamad Hinzab, Permanent Delegation of the State of Qatar to UNESCO, who attended the ceremony said, “The Years of Culture were created by Qatar Museums because we believe in the importance of culture as a bridge of effective dialogue between peoples, because we cannot know each other without culture. That’s why Qatar-France 2020 Year of Culture initiatives such as “Bring them Back”, safeguards one of the most important elements of intangible cultural heritage identified by UNESCO, must be nurtured.”

La Cité internationale de la tapisserie at Aubusson was created in response to UNESCO incorporating the craftsmanship of tapestry into its list of intangible Cultural Heritage of Humanity in 2009. Aubusson tapestry is a six-century-old luxury tradition, a craftsmanship of excellence and local tradition, permanently renewed through contemporary creation.

Al Muftah is a Qatari visual artist who received a Bachelor of Arts from Virginia Commonwealth University School of Arts in Qatar. Upon her graduation, Al Muftah directed her artistic practice to printmaking, typography, and documentation, which evolved over the years into large-scale installations and performance pieces. The core inspiration behind her artistic production is her country’s cultural heritage where she borrows elements from the people of Qatar’s oral history and folklore and readapts them to reflect her relationship with her land’s past.

Al Muftah’s fascination with all facets within the context of her country’s memories has led her to develop her research and reflect on life in the old neighbourhoods of Qatar and the people who shaped them. As an approach to resuscitate and reconstruct past moments and memories into contemporary settings, she often finds characters and stories from these neighbourhoods that transform in her own universe into the abstract figurative adaptation that is seen in her work today. Al Muftah gradually turned to conceptual documentation through bookbinding to express the story of Qatar’s past through her eyes — immortalising that which was previously lost in the abyss of time.

Bouthayna Al Muftah said, “It was an absolute honour collaborating with Aubusson tapestries, who have been able to translate my vision into this art piece. This project was conceived at Virginia Commonwealth University during my residency with Fanoon from 2019 to 2020. To see it now as a hanging installation is a privilege beyond my expectations. I would also like to take this opportunity to thank HE Sheikha Al Mayassa Bint Hamad bin Khalifa Al Thani and the Years of Culture team, and of course UNESCO and Aubusson, for providing me with an opportunity to be part of this unique initiative. It has been a pleasure working alongside them.” 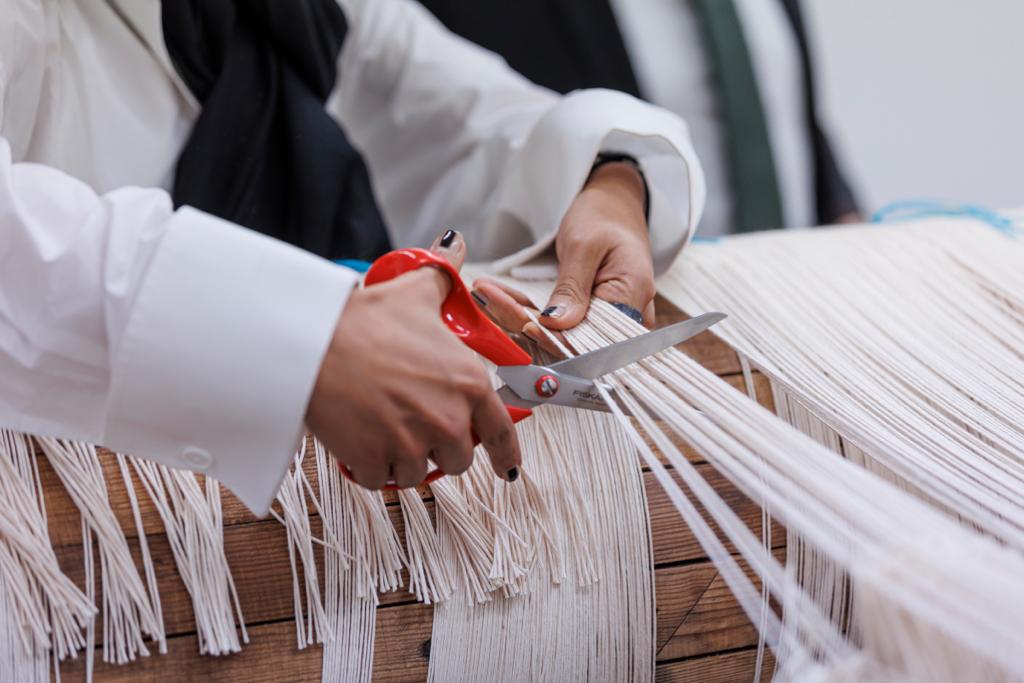 Aisha Ghanem Al Attiya, Director of Cultural Diplomacy, Qatar Museums said, “I cannot imagine for a more fitting way to celebrate the 50th anniversary of strong ties established between our two countries than the physical manifestation of the friendly and fulfilling relationship we now have. Cultural collaboration, enabled through programmes like the Years of Culture initiative, allows for a strong, rich foundation that brings people together time after time across cultures and continents.”

In celebration of its 10th anniversary, the 2022 Year of Culture is offering programming from the Middle East, North Africa and South Asia (MENASA). 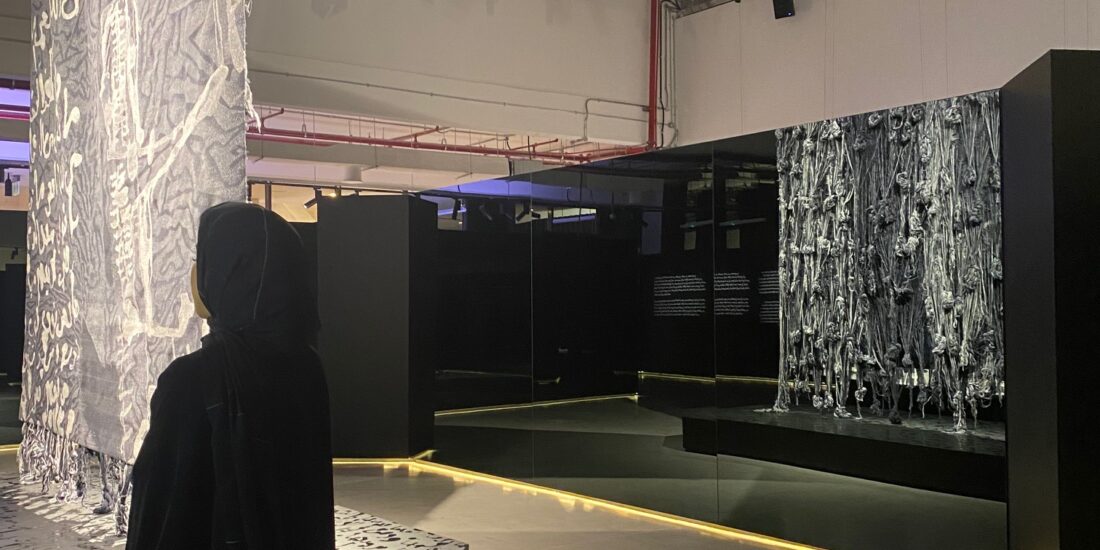 A Nostalgic Tapestry Woven Together by Bouthayna Al Muftah

An exhibition that traces memories, journeys of the past, passage of time and the collection of thoughts 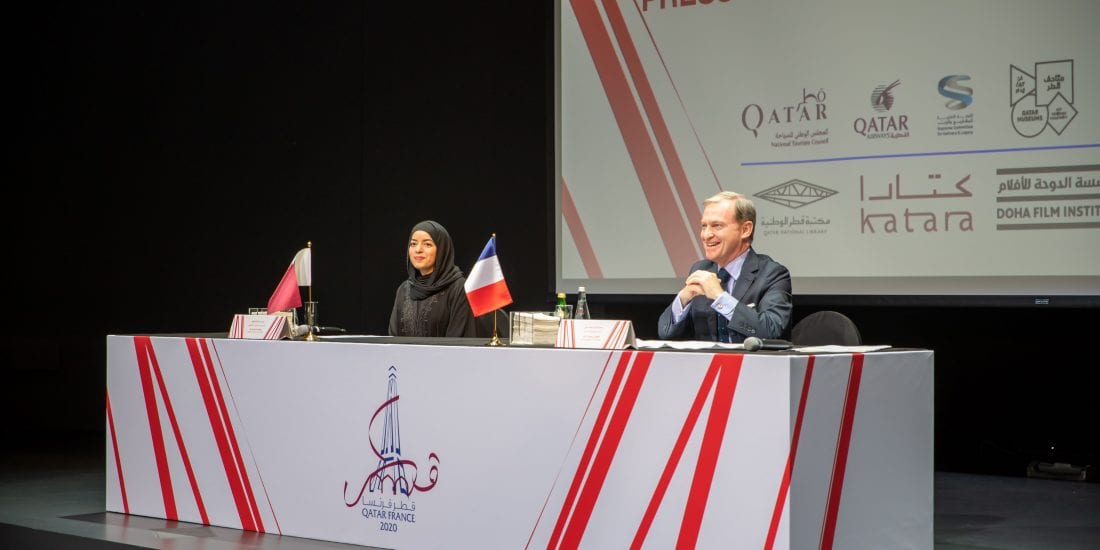 Qatar Museums (QM) joined with the French Embassy in Doha to announce a wide-ranging programme of exhibitions, 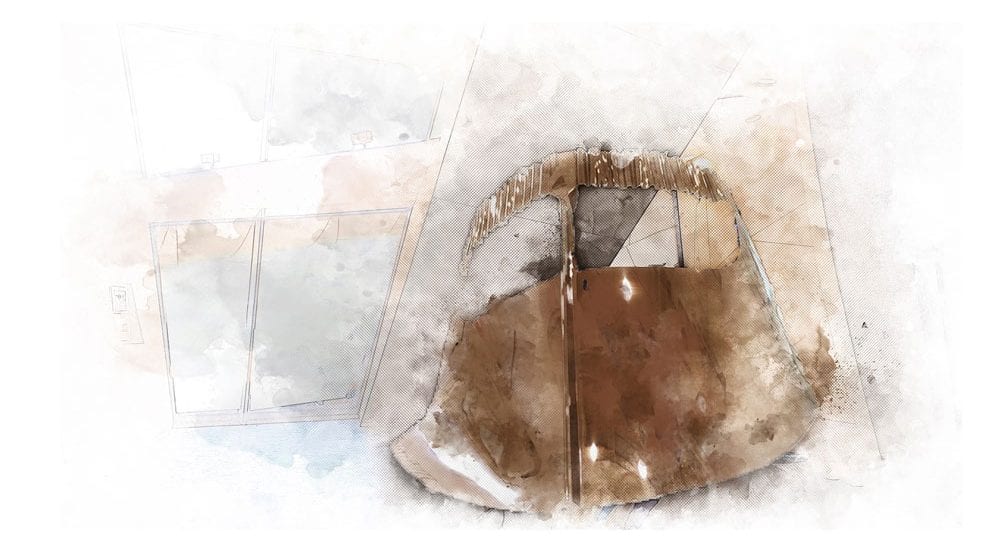