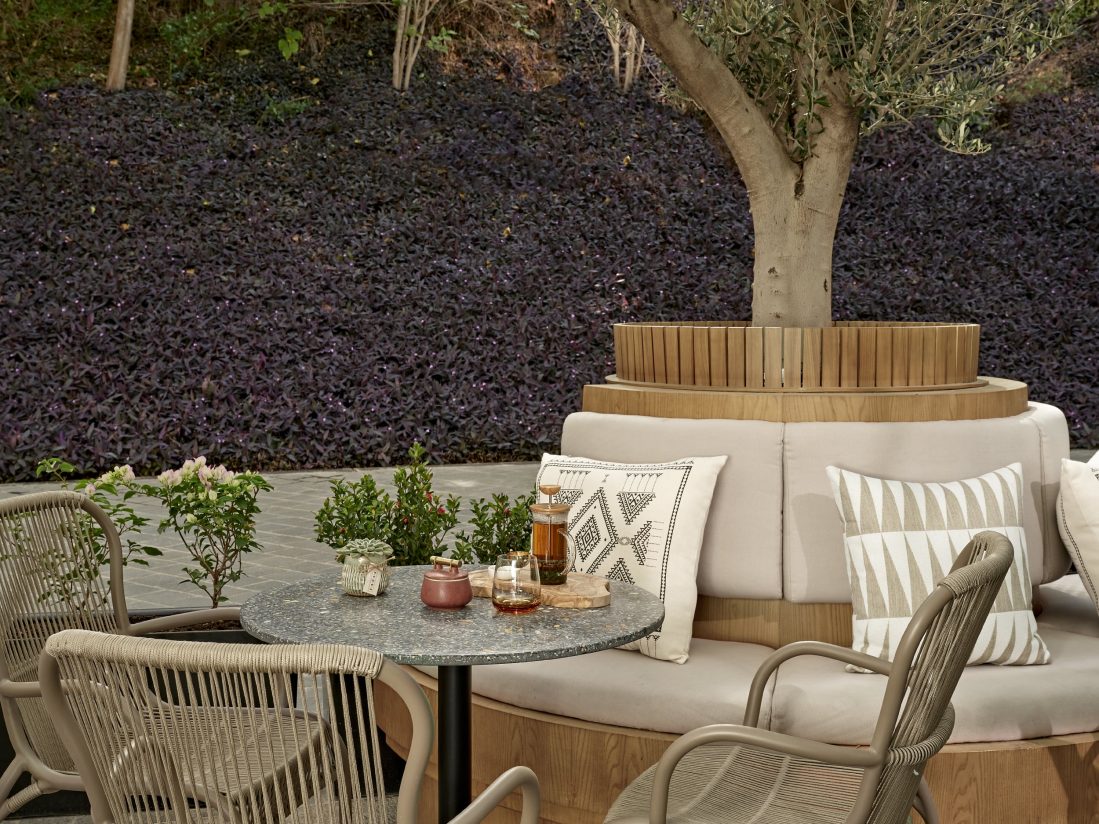 Design of the Twisted Olive

Marie Soliman and Albin Berglund, founders of Bergman Design House, a design house that is making waves in the luxury interior design world have touched down in Qatar, with a restaurant interior that transports us to the Mediterranean with its open, green and free-flowing space. By Sindhu Nair

Twisted Olive as the name suggests has an 80-year-old olive tree as the inspiration for the contemporary bistro concept, with its menu designed around the philosophy of deep roots and the delicate fruit that the tree provides. Twisted Olive offers a fusion between modern comfort food and innovative dishes while being considerate of traditional ingredients. The interiors reflect the same concept, a timelessness in the green, open design that makes anyone want to stay rooted in this space. What makes Twisted Olive even more interesting is its owner, the inspirational Sheikh Mohammed bin Abdullah Al Thani, the first Qatari to reach the summit of Mount Everest, the highest mountain in the world. Mo Al Thani, as he is fondly known in social media circles, continues to motivate through sports and fund-raising activities as a brand ambassador of ROTA, a private non-profit organization, based in Doha, that raises funds to uplift Asia and parts of the Middle East. 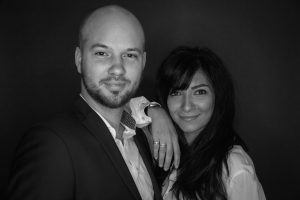 “Each project has its soul, its sense of place and its own potentials. We grasp it, embrace it and enjoy it!”

With over 25 years of combined experience, Marie Soliman and Albin Berglund, founders of Bergman Design House, have built up an enviable portfolio of projects, spanning from London to St. Petersburg, to Qatar and New York.

But what has gained the design house immense popularity is the design they have recently completed, the BXR – London, a boxing and fitness gym that is touted as UK’s first high-end boutique boxing gym. Backed by Anthony Joshua, the British professional boxer who is a two-time unified heavyweight champion, the gym is split over two floors and decked out in dark wood, with the vibe being more gentlemen’s club than a gym, according to GQ. The gym did garner a lot of attention, some due to its prolific owner and some for the cool, purposeful interiors that exudes exclusivity and stresses on the strict regime of workouts.

SCALE quizzes Albin Berglund about their design ethos and the concept bistro atmosphere that the design duo created in Doha.

SCALE: What was the theme of Twisted Olive? How was the design aesthetics arrived at?

Albin: We wanted to create a feeling of a minimal Artdeco-colourful garden. The space to be designed was a bit tricky due to the narrow-shaped location of the building, so we introduced greenery, tall trees, and many design elements to open up the space visually and enhance circulation. 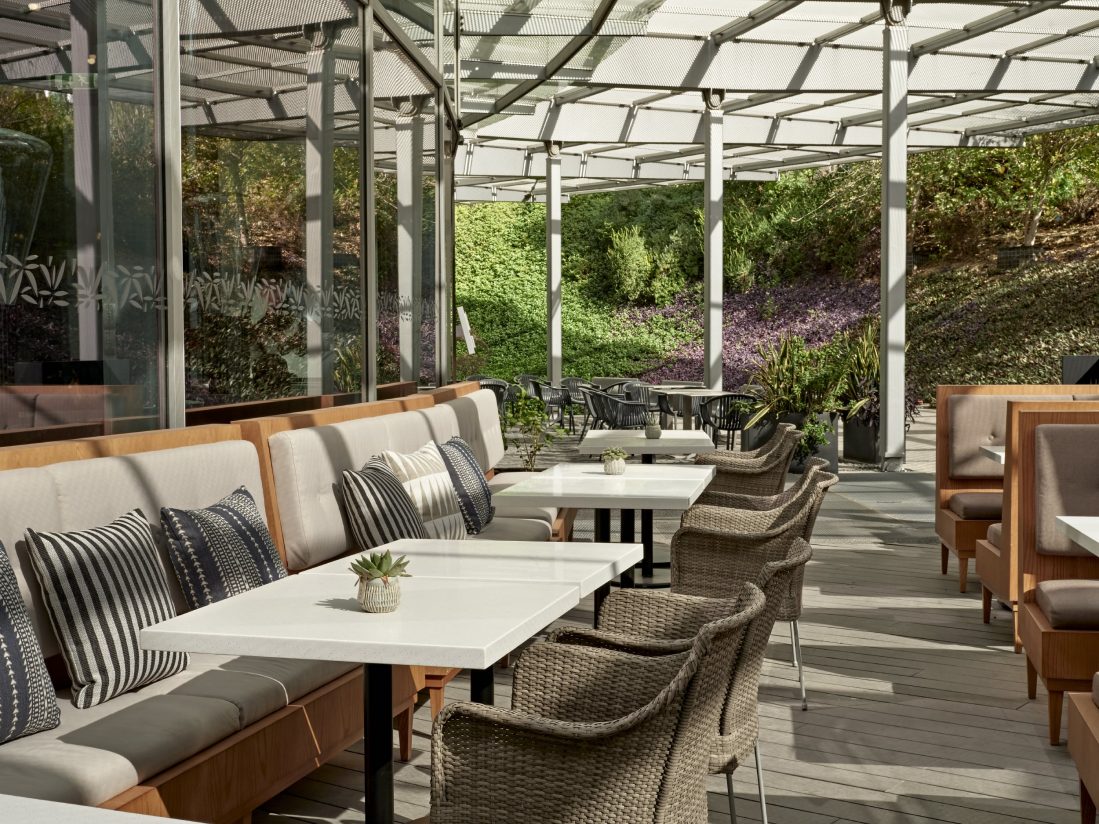 SCALE: How has material play helped you in achieving a tone and narrative for Twisted Olive?

Albin: Colours and patterns are so important and plays a very essential role and we love layering. We wanted Twisted Olive to feel like a timeless Bistro in the heart of Doha. Fresh, light, inviting, warm, that offer different experiences.

We also wanted it to feel elegant, yet up to date and sustainable.

We have used punches of green colours in the main counter bar, we have used feather-like porcelain tiles inspired by the Art Deco era in the most fashionable minimal way.

Green has a natural effect of driving people in and adding a cheerful outdoor feel to the space. The terrazzo table-tops added this layer of nature and rawness naturally.

The art pieces by Marie Soliman, celebrates Twisted Olive’s menu bringing colours and smells of cardamom, pistachios, açai to life on the canvases.

SCALE: Tell us a little about the “design powerhouse”. The first project together and how do you compliment and contrast each other?

ALBIN: Marie and I met in our previous company where we were designing 5-star-luxury hotels across the globe together.

We knew we complemented each other in the diverse ways we approached design. Marie is creative and she strives to keep doing something unexpected. I am a Swedish designer with a fashion photography background always focusing on the smallest details. I  cannot move on until I am satisfied with the details and how it will work in the space. 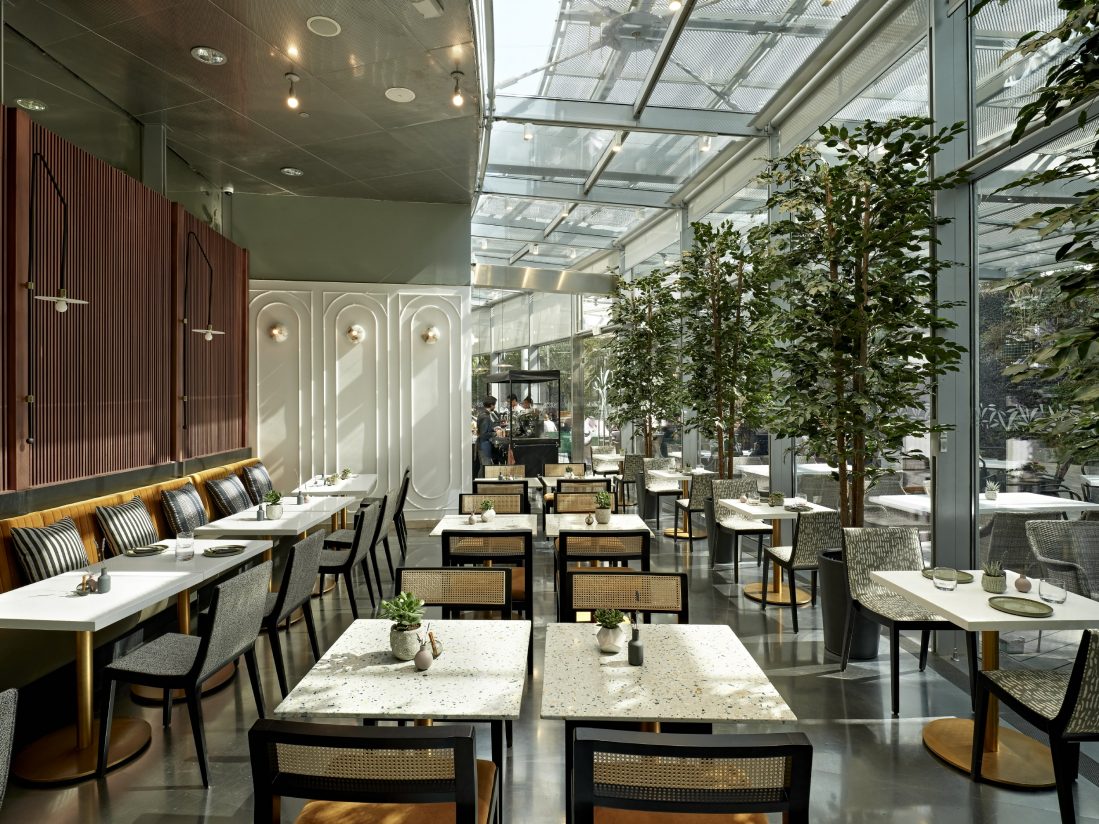 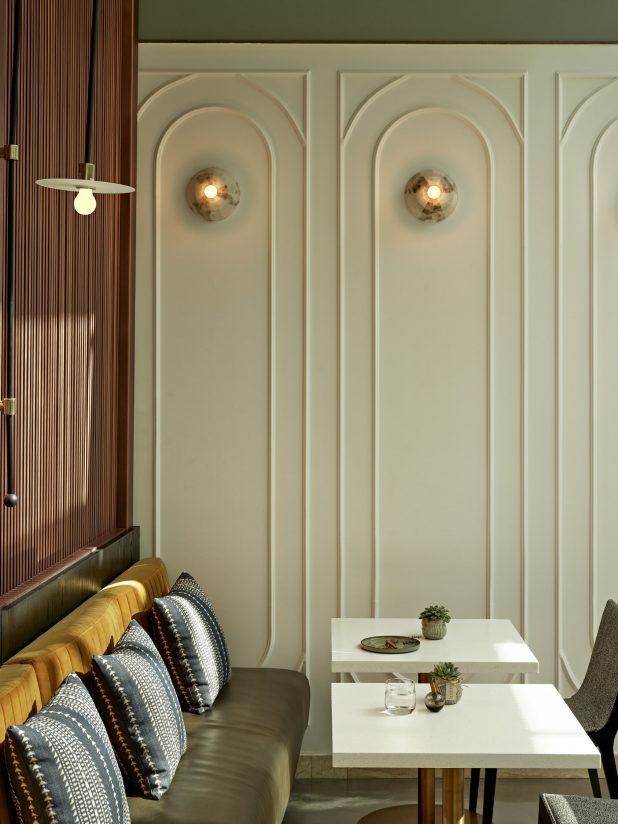 Together we complement each other and our approach towards the design belief that no two clients are the same, no two locations can ever be similar, circumstances can never be identical, and hence no two projects of ours should look the same. Each project has its own soul, its own sense of place and its own potentials. We grasp it, embrace it and enjoy it!

A great work-relationship grew into two a strong friendship, of two minds conquering the design world.

SCALE: How has the learning curve been working with clients in the Middle East? Who was your first client? How did the Doha association happen?

Albin: BXR-London was our first official project as Bergman. It is a boutique high-end boxing gym in the heart of London. Anthony Joshua, the heavy-weight champion of the world is part-owner and there is probably no magazine in the world that has not featured this gym. It opened many new doors for us. With a background in hospitality and high-end residential interior works, we are also doing commercial work. 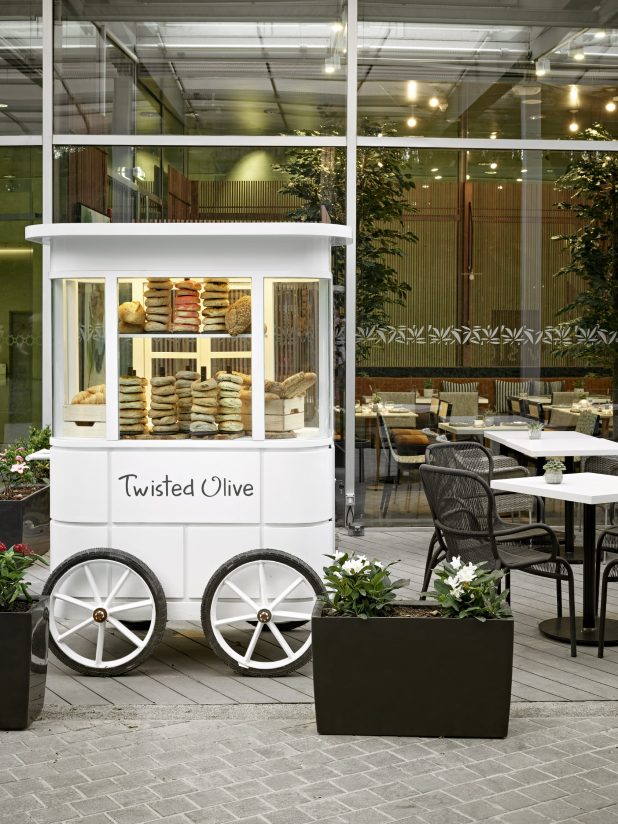 We also completed hotels, palaces, and villas throughout the Middle East so when we were contacted by a high-profile client who wanted to launch a project in Qatar we were honored and felt happy to start working with the Qatari. It was our client who introduced us to Sheikh Mohammed Al Thani the owner of Twisted Olive.

Marie had also worked on several high-profile palaces in Qatar. We could not be happier that our client-designer relationship has turn into a strong friendship.

We have now completed many projects in Qatar and consider it our second home. We are now looking at opening a Bergman Interiors branch in Doha.

Marie is native Arabic speaking and was raised within the Middle Eastern culture so it feels like a natural step for us.

SCALE: What were the biggest challenge in this project and how did you find a solution to this?

The narrow shape of the building and the internal space was the biggest challenge.  We used colour tricks and hacks to create experiences and divide zones for guests. 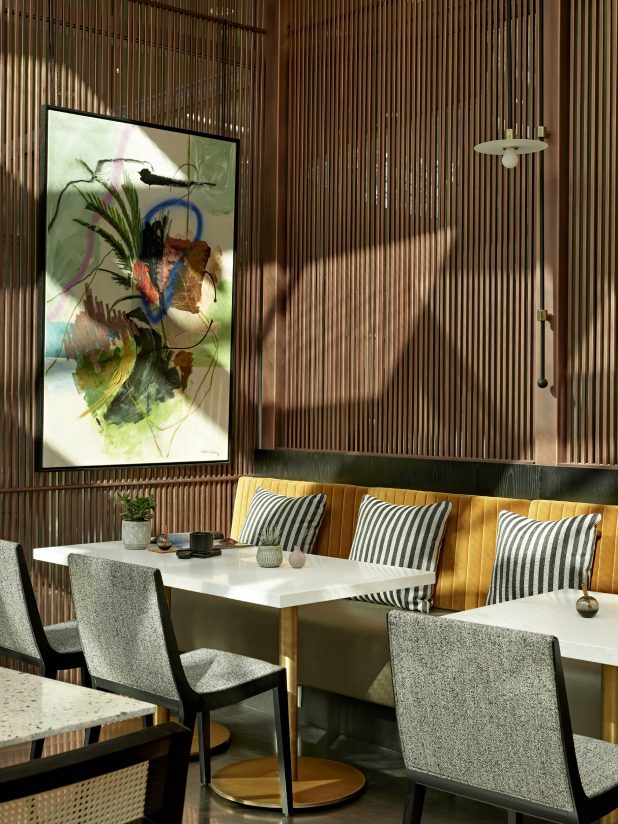 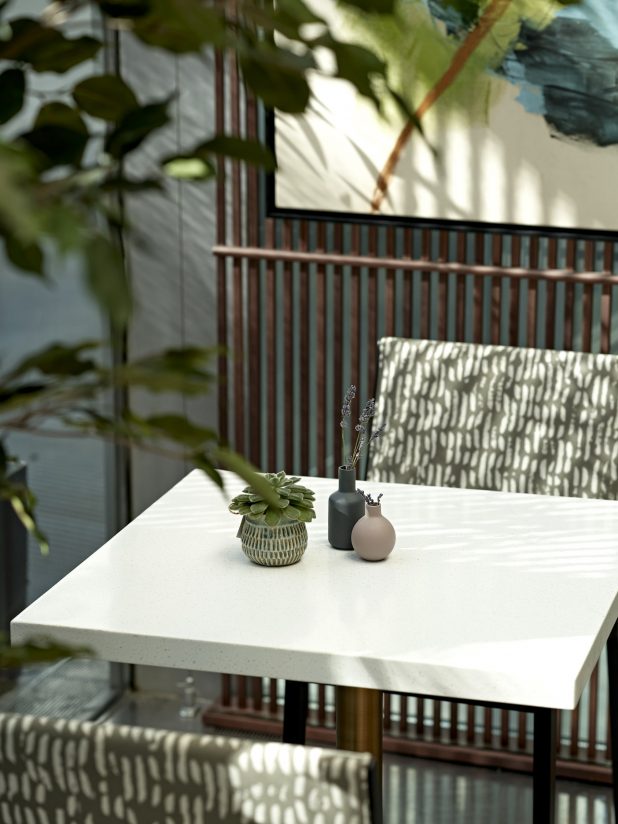 We created different seating areas for couples, families, or group of people but also other areas with more privacy surrounded by tall beautiful trees so you will never feel you are sitting on your own.

We also used antique mirrors to maximise the feel of space inside and increase depth.  Finally, the contrast of paint helped to open up the space.

SCALE: How did you solve the issue of location, of making the design have a sense of place?

Albin: The location is never an issue, we are located on a wonderful piece of architecture in one of our favourite cities. A country of beautiful people and great hospitality. We were inspired by all this while we wanted to give Twisted Olive a sense of timelessness. A place that makes you want to stay on, for its warm welcoming interiors, which accepts you in its folds and I think we have succeeded in this.

Twisted Olive is located on an architectural marvel of a building, the Burj Doha, by the legendary Architect Jean Nouvel, which SCALE had previously featured.

This is a restaurant we can all plan to visit once the lockdown ends and experience the coming together of many greats; an Italian architect, designers from London in a restaurant owned by a motivational go-getter Qatari, in an elevating setting that is meant to take us on a journey through its cuisine while remaining rooted to history of the place.