The story behind the renovation of the historic 1907-built Government Higher Secondary School (GHSS), Karaparamba, made possible by PRISM and IIA Calicut Centre with the intuitive designs from Design Art & Culture (DAC) that makes the process of learning more enjoyable.

When it comes to opting for schools, a large majority of the upper-middle class turn towards management facilitated schools or private schools for their child’s education. This could be one reason why the government schools have never taken it upon themselves to improve facilities or teaching methods. This bias had to be eradicated for the evolution of a healthier society, and a grass root level modification was the need of the hour. The pertinent question was while students and parents together preferred government institutions like the IITs, AIIMS, and NITs for quality higher education, why was it impossible to provide quality primary/secondary education in government schools? What should be the ultimate aim of school education? Those were the questions that PRISM (Promoting Regional Schools to International Standards through Multiple Intervention) asked and found answers to, to inculcate a new chapter for education where the process of learning becomes much more enjoyable and one which attracts more participation from all realms of society.

PRISM is an initiative by A Pradeep Kumar, now an ex-MLA in Kozhikode, which was started in 2013 with the Government Vocational Higher Secondary School for Girls, Nadakkavu, a school that has now been upgraded to one of the top three government schools in India.

The second finished project is the Government Higher Secondary School (GHSS), Karaparamba which was completed last year. Presently the initiative is focusing on the schools in Calicut North constitution. PRISM aims to achieve all its goals through multiple interventions from society through the experts in that field. It hopes to establish top-class infrastructure facilities in schools, while focussing on increasing quality of education and enhancement of teaching and leadership skills with inputs from the Indian Institute of Management, Kozhikode  (IIM-K).

The Indian Institute of Architects (IIA) Calicut Centre supported this initiative by providing intellectual support through designs and supervision as part of their outreach programme. It is through IIA’s directive that DAC (Design Ashram Consultants) worked as the architectural consultant for this project. DAC is a consortium of architects, designers, and engineers with years of experience in these fields.

The Karaparamba Government Higher Secondary School, East Hill, Kozhikode, originally started in 1907, became the second school to come under the PRISM project. But what this project brings to light is the coming together of multiple resources to create an environment of growth.

“For DAC, GHSS Karaparamba was one of the most satisfying projects taken up because of the kind of spaces created and the way students and the community started using every inch of the space in a positive way, taking pride in the environment created and hence adding life to the spaces we designed,” says Brijesh Shaijal, the lead architect and partner of DAC. He began his architectural practice in Manjeri, in 2005, envisioning its growth into a practice that deviates from the norm and carves a niche in the industry, a dream that is a reality with DAC.

Honouring Winston Churchill’s most famous quote, “We shape our buildings; thereafter they shape us!”, the DAC team metamorphosised the essence of teaching and learning into visual reality.

“The school which is now acclaimed as the first green government school in India encourages students to have a healthy relationship with the outer environment,” says Brijesh.

Explaining the entire design process, Brijesh says, “The renovation of the school underwent a master plan intervention, keeping some structures intact with modifications, and others demolished and reconstructed. The clean yet rustic image of the school breaks away from the usual facades that come to mind when we think of government schools.”

“The Karapparambu GHSS has emphasised on the freedom of students by providing an open distinctive educational experience by creating cosy, smaller version of a neighbourhood or a city. It focuses on the school as an entity towards the building of a larger entity, the society, and the community and encourages participation from all of them to create a space that expands to take them all in,” says  Nimisha Shaijal, another partner and lead architect of  DAC.

As you enter the main court of the campus, you get a glimpse of the scale by a series of steps, guiding you to the first floor of the main building, conceptually, leading you to a bright future. The entry steps also function as seating for the open stage placed on the linear axis of vision with the main building reveals Brijesh. The various blocks within the campus are planned and placed in specific areas for interactive activities like studying, playing, reading, dining, etc, to develop a sense of oneness. 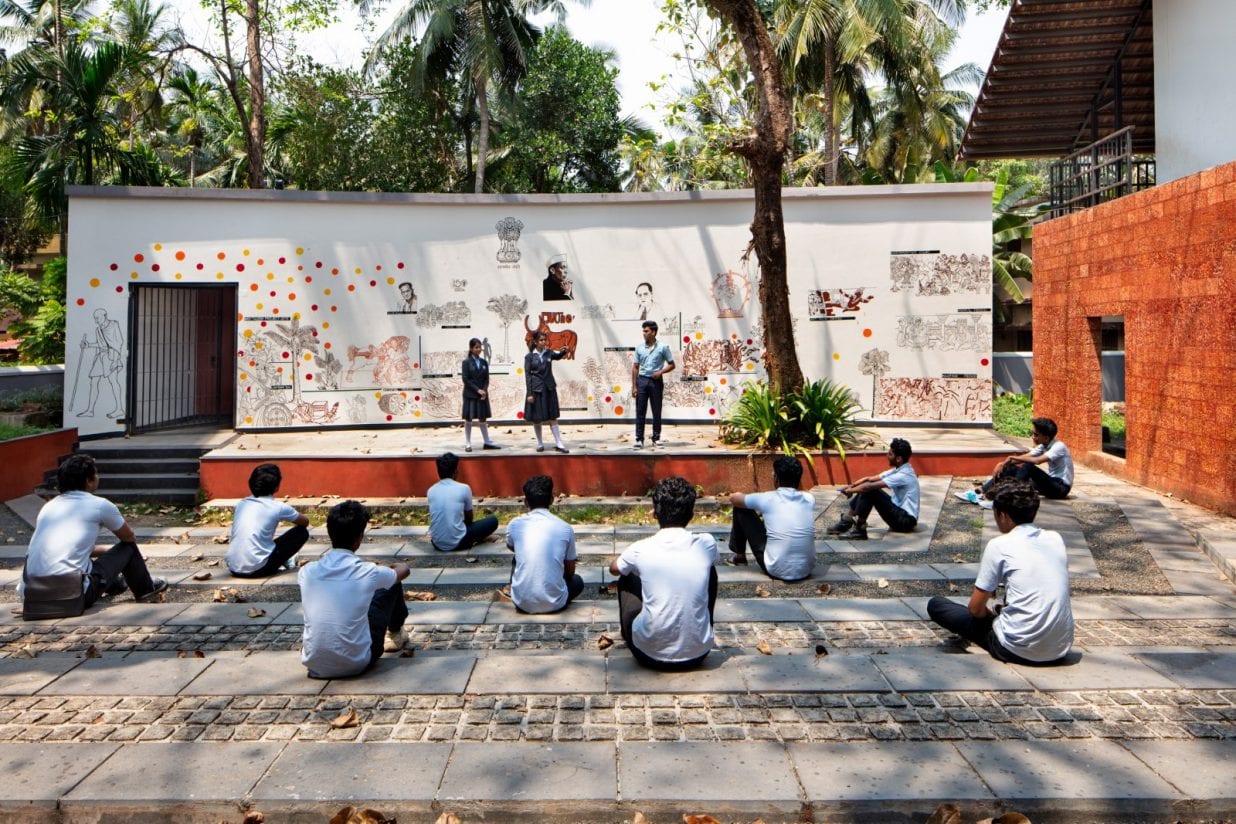 The most interesting areas are the common areas like the dining room which have been elevated from the usual dingy, poor-lit spaces in government schools to a semi-public space that opens up with no walls and permanent seats made of cement, left unfinished. The specially imported tables and chairs, with delicate details of grains and colours, add to the whole abstract form of the school. Replacing traditional wooden shelves and benches in the library, the Karaparambu School library uses upgraded steel shelves that add a sense of lightness to the room. To the rear side of the library, an outdoor reading space is provided, with steps to integrate the literary programmes to be conducted alongside. 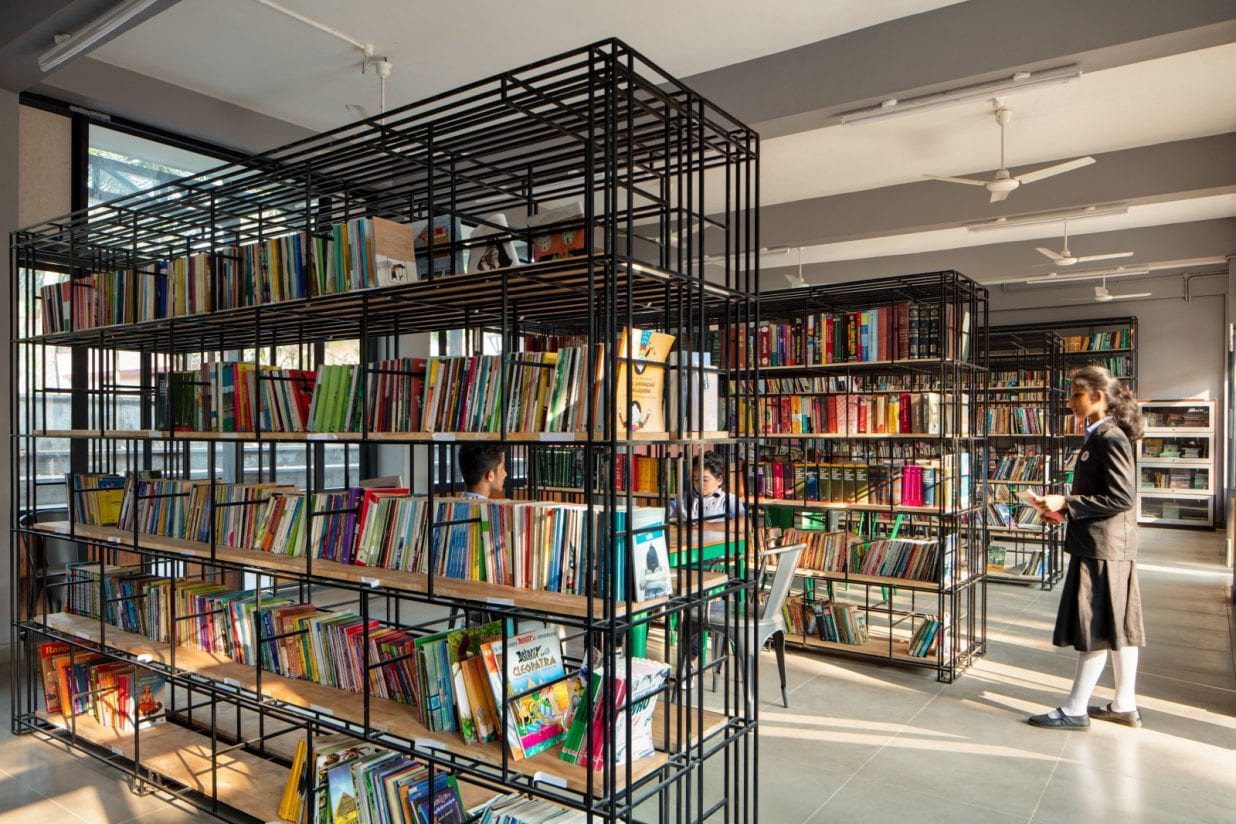 Inclining towards a more intimate environment, the structure is devoid of contemporary windows with bars and shutters. Instead, a new feature is created: a door that leads to a small balcony with metal railings when opened. This element goes well with the metal truss framework of the roof and enhances the sense of oneness with the exteriors.

The intrusion of metal frames into the unpolished raw laterite surfaces gives a rustic and raw finish while being rooted to the surroundings. Be it the grey texture finish of unfinished concrete, rough paved stones, or the glass panels to contrast the crude look, the facade respects the stature of the building it serves.

Ensuring that no trees were cut during the building of the structures, with amenities for a completely differently-abled friendly campus, and solar panels supporting the maintenance through sustainable forms of energy, the project is as green as an educational premise can aspire to be.

“For example, a beautiful shady tree that came in the way of the ramp that leads to the indoor courts is left as it is, and the ramp curves around it. This notion of design respecting nature develops similar emotions of care for the earth in the growing students. The green and sustainable design of the school is conceptualised by rainwater harvesting systems, solar panels, and bio-composts, few features that increase the responsibility of students as better citizens, and which are currently ignored at most institutions,” says Brijesh.

The design also abides by the climate of the region, with sloping roofs and long eaves to protect the corridors from monsoon rains, and harsh sun in summers. The provision of courtyards and smaller intermittent courts enhance cross-ventilation across rooms, thus providing better thermal comfort for learning.

Apart from the spatial design, the DAC team portrayed an effective process of community involvement, and public interventions, trying to promote a cohesive society that is actively engaged with its surroundings. The open-air theatre that welcomes you to the campus could be used as a venue for community discussions, night meetings, and community markets that touch on the responsibility of society and the community towards the school. The connected open spaces surrounding the structures function as a pedestrian walkway, inculcating healthy manners of morning walk, etc. in the young minds.

Another intelligent use of surfaces can be seen in the boy’s washroom which is covered with blackboards to provide creative alternatives to graffiti and to improve maintainability.

“As an architect of this project, I went back to the roots of my profession. I started believing that one should not work for society, rather one should work with society. The biggest learning is that you are just a part of the total development,” says Brijesh. And the function of GHSS (Government Higher Secondary School Karaparamba), built with Rs 12.5 Crore as a major fund from the Government, keeps changing from being a regular school, to being the site for a beautiful morning activity like running, to being the perfect location for cultural activities, community exhibitions, weddings, film shooting, conferences and seminars, art workshops, public library, and even a kitchen!

The end result truly embodies the guiding principles of DAC, “It is a school that genuinely opens minds and spaces to create a beautiful experience with nature and the built environment even as it tries to integrate the community in the act of imparting education to the new generation,” says Nimisha.

Photography by Noughts and Crosses 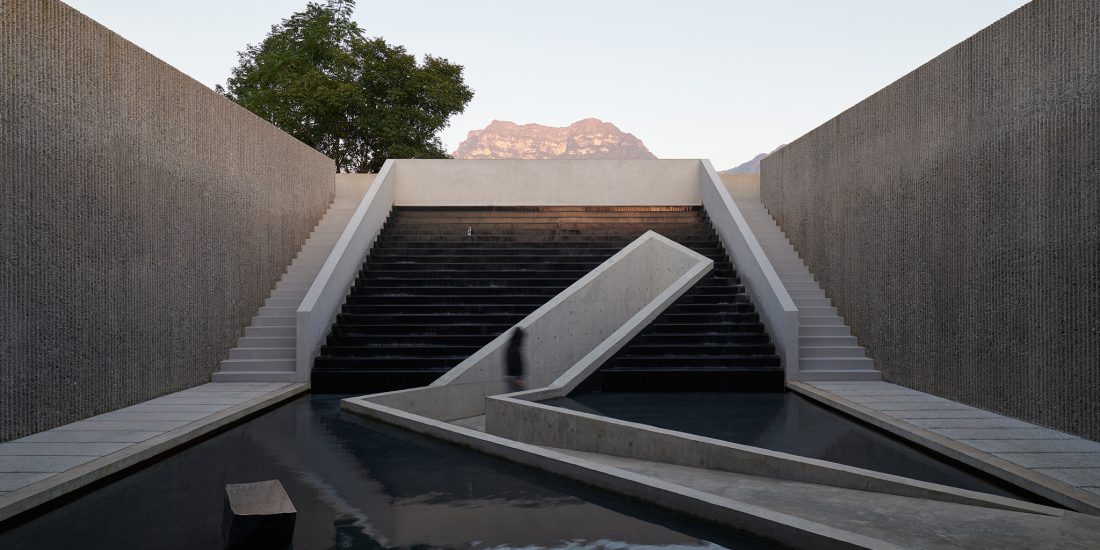 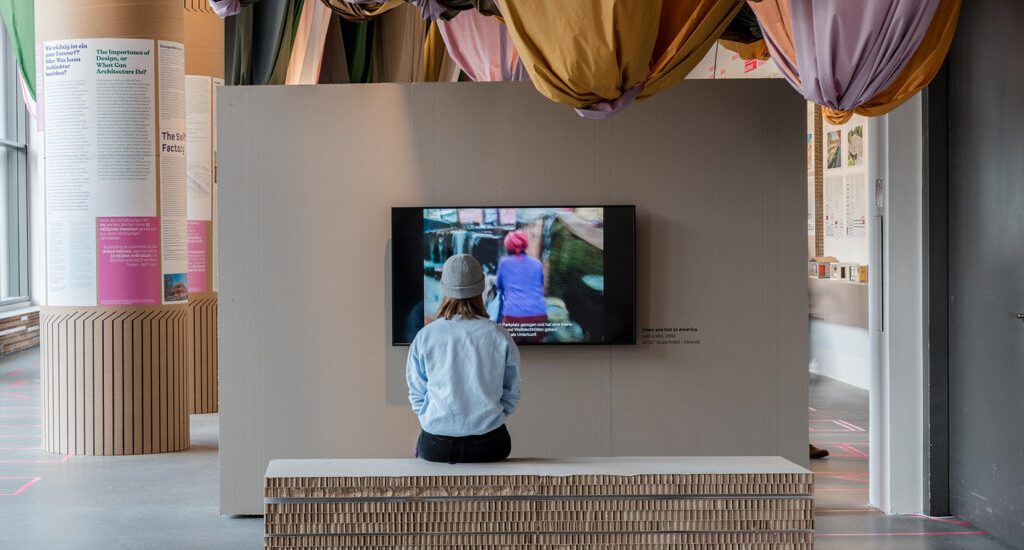 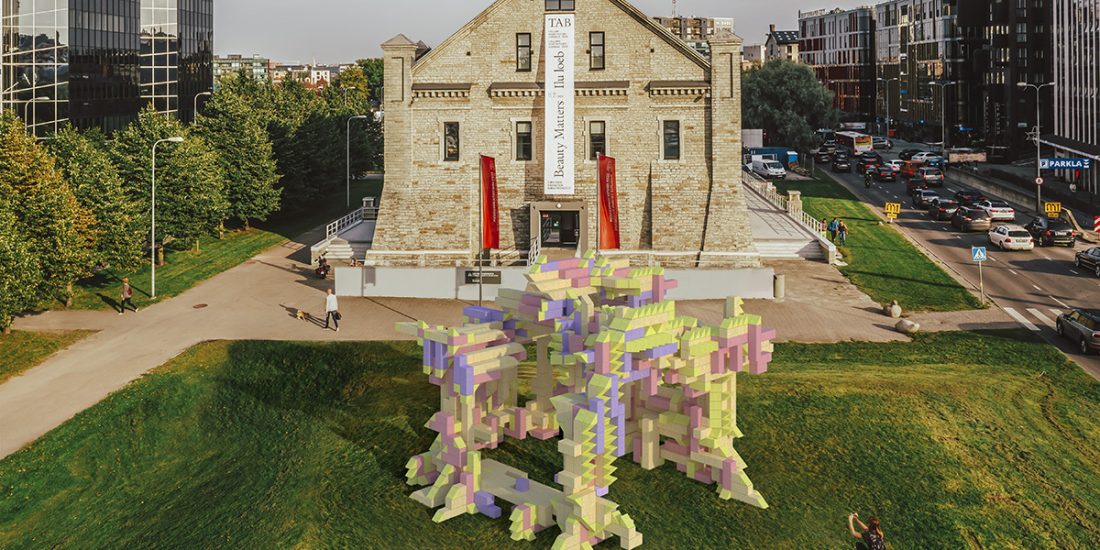