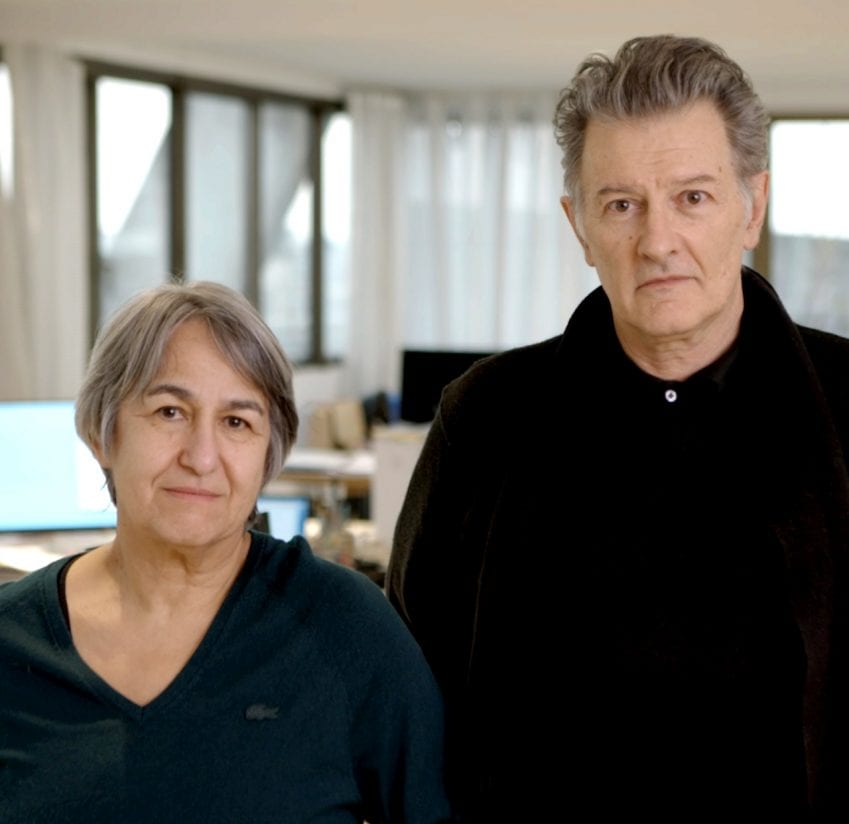 Anne Lacaton and Jean-Philippe Vassal, win the 2021 Pritzker Architecture Prize, according to Tom Pritzker, Chairman of The Hyatt Foundation, which sponsors the award that is known internationally as architecture’s highest honour. 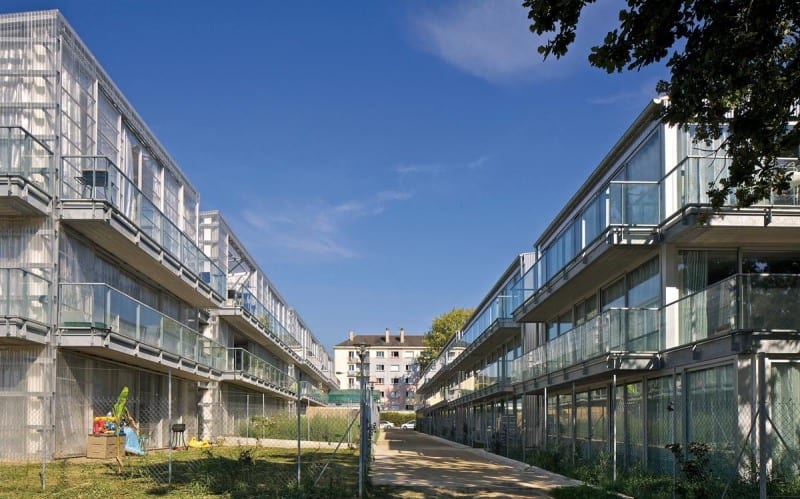 53 Units, Low-Rise Apartments, Social Housingm2011, Saint-Nazaire, France: This low-income development consists of 53 units organized in a series of three-story buildings, each with six apartments. The architects’ use of transparent, retractable polycarbonate panels and insulating thermal curtains throughout the interior rooms create comfortable environments full of light that are also ecologically and economically responsible. Photo courtesy of Philippe Ruault 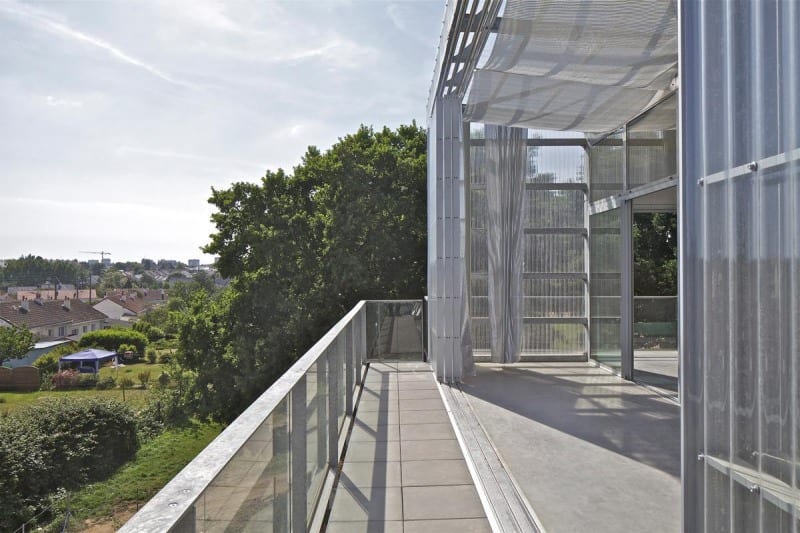 53 Units, Low-Rise Apartments, Social Housingm2011, Saint-Nazaire, France:: The units included private gardens for each ground-floor residence and balconies or winter gardens on those of the upper floors. Photo courtesy of Philippe Ruault

“Good architecture is open—open to life, open to enhance the freedom of anyone, where anyone can do what they need to do,” says Lacaton. “It should not be demonstrative or imposing, but it must be something familiar, useful and beautiful, with the ability to quietly support the life that will take place within it.”

Through their design of private and social housing, cultural and academic institutions, public spaces, and urban developments, Lacaton and Vassal reexamine sustainability in their reverence for pre-existing structures, conceiving projects by first taking inventory of what already exists. And it is this inventory that made them do nothing when approached to redesign the public square in Bordeaux. According to their interview with the Guardian, the architects told the clients to leave the square alone as “it was perfectly good as it was and that the public money could be used somewhere the need was much greater.” By prioritising the enrichment of human life through a lens of generosity and freedom of use, they are able to benefit the individual socially, ecologically, and economically, aiding the evolution of a city. In an era when architects try to put their thumbprint on any building or public space by either building anew through regeneration, Lacaton and Vessel have worked to improve lives and transform lives through their sensitive approach not only to design but to life in general.

École Nationale Supérieure d’Architecture de Nantes, 2009: Located on the bank of the Loire River, this large-scale, double-height, three-story building features a concrete and steel frame, encased in retractable polycarbonate walls and sliding doors. Areas of various sizes exist throughout, and all spaces are deliberately unprescribed and adaptable. Photo courtesy of Philippe Ruault.

École Nationale Supérieure d’Architecture de Nantes, 2009: While the brief stipulated 15,150 square meters of space, the final result was significantly expanded by the architects through the addition of 4,430 square meters of internal space and 5,305 square meters of functional outdoor space, and for the same budget. Photo courtesy of Philippe Ruault

“Not only have they defined an architectural approach that renews the legacy of modernism, but they have also proposed an adjusted definition of the very profession of architecture. The modernist hopes and dreams to improve the lives of many are reinvigorated through their work that responds to the climatic and ecological emergencies of our time, as well as social urgencies, particularly in the realm of urban housing,” states the 2021 Jury Citation.

The architects increase living space exponentially and inexpensively, through winter gardens and balconies that enable inhabitants to conserve energy and access nature during all seasons. Latapie House (Floirac, France 1993) was their initial application of greenhouse technologies to install a winter garden that allowed a larger residence for a modest budget. The east-facing retractable and transparent polycarbonate panels on the backside of the home allow natural light to illuminate the entire dwelling, enlarging its indoor communal spaces from the living room to the kitchen, and enabling ease of climate control. 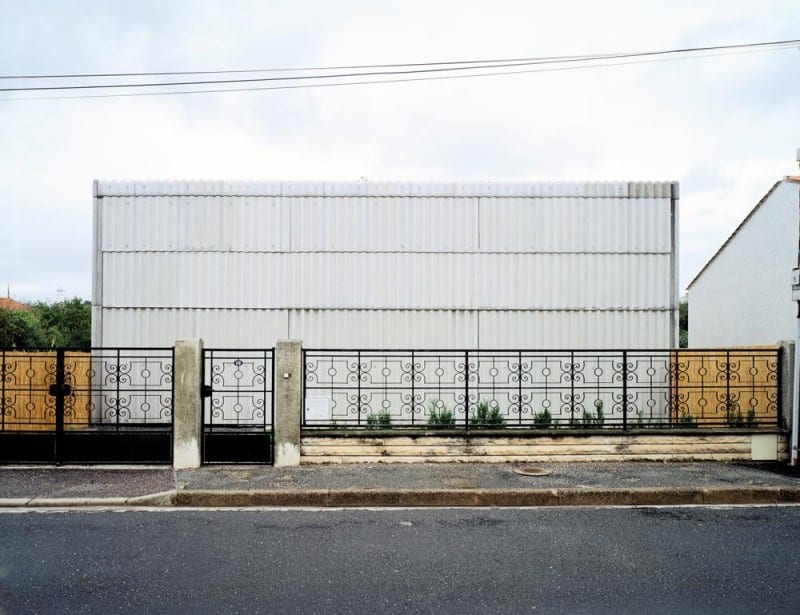 Latapie House, 1993, Floirac, France: Latapie House was the architects’ initial application of greenhouse technologies to design a larger, efficient residence, creating space for the clients’ children to run and grow, on a modest budget. Photo courtesy of Philippe Ruault 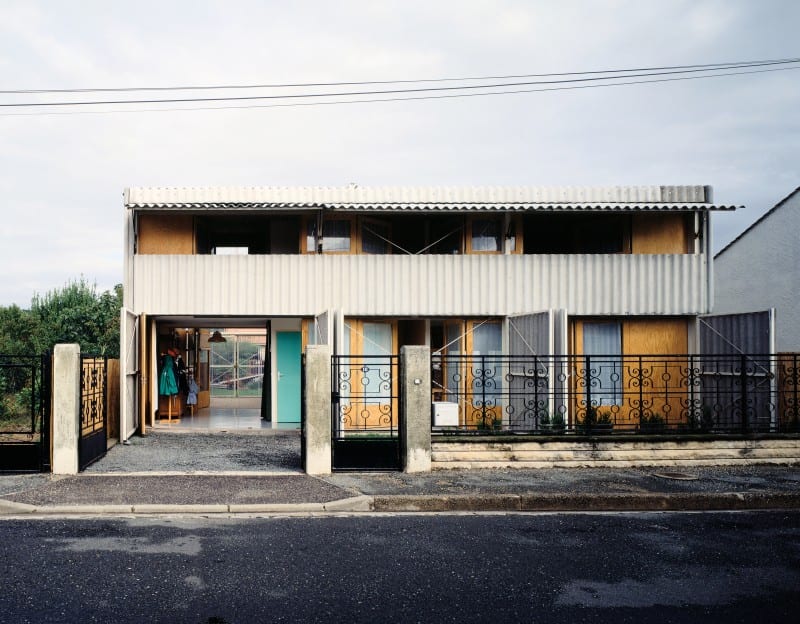 Latapie House, 1993, Floirac, France: Through the use of retractable and transparent polycarbonate panels on the east-facing rear of the home, the communal areas of the residence gain significant space and flexibility of use, extending outdoors, and allowing natural light and air to circulate through the dwelling. Photo Courtesy of Philippe Ruault.

“This year, more than ever, we have felt that we are part of humankind as a whole. Be it for health, political or social reasons, there is a need to build a sense of collectiveness. Like in any interconnected system, being fair to the environment, being fair to humanity, is being fair to the next generation,” comments Alejandro Aravena, Chair of the Pritzker Architecture Prize Jury. “Lacaton and Vassal are radical in their delicacy and bold through their subtleness, balancing a respectful yet straightforward approach to the built environment.”

Transformation of 100 Units, Tour Bois le Prêtre, Social Housing (with Frédéric Druot) 2011, Paris, France: Originally built in the 1960s, during an era of large-scale social housing construction, the Tour Bois le Prêtre was in dire need of infrastructure, plumbing, ventilation, and electrical upgrades. Lacaton and Vassal rejected the city’s plans to demolish the 17-story, 96-unit building, and instead modified it.  The architects increased the interior square footage of every unit by removing the original facade, extending the footprint of the building, and enclosing it with a new self-supporting facade. As a result, previously constrained living rooms now extend into terraces and flexible space featuring large windows for unrestricted views of the city. Photo courtesy of Philippe Ruault.

The architects increased the interior square footage of every unit through the removal of the original concrete façade and extended the footprint of the building to form bioclimatic balconies. Once constrained living rooms now extend into new terraces as flexible space, featuring large windows for unrestricted views of the city, thus reimagining not only the aesthetic of social housing but also the intention and possibilities of such communities within the urban geography. This framework was similarly applied to the transformation of three buildings (G, H, and I), consisting of 530 apartments, at Grand Parc (Bordeaux, France 2017), with Druot and Christophe Hutin. The transformation resulted in a dramatic visual reinvention of the social housing complex, the modernisation of elevators and plumbing, and the generous expansion of all units, some nearly doubling in size, without the displacement of any residents and for one-third of the cost of demolishing and building new. 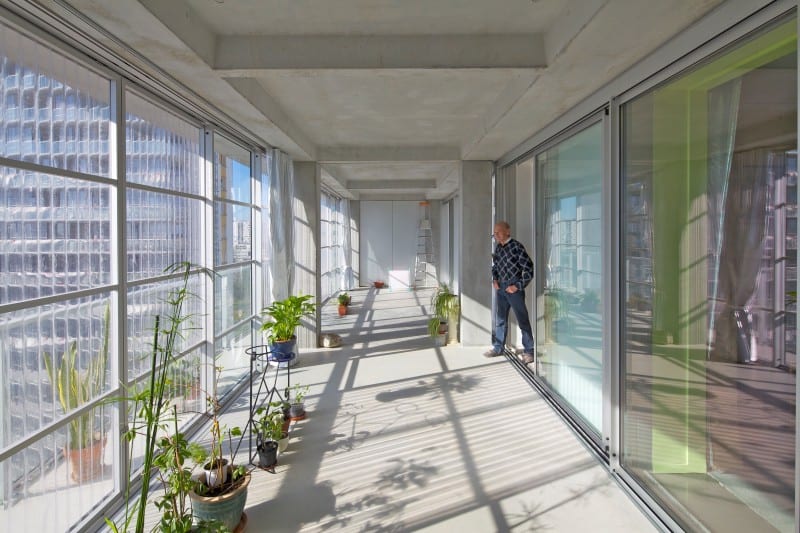 Transformation of G, H, I Buildings, Grand Parc, 530 Units, Social Housing (with Frédéric Druot and Christophe Hutin), 2017, Bordeaux, France: By removing the building facade and extending the interiors outward to create new spaces, forming bioclimatic winter gardens or balconies the architects managed to the double the size of some units and a dramatic visual reinvention that challenges the aesthetic conventions of social housing. Photo courtesy of Philippe Ruault. 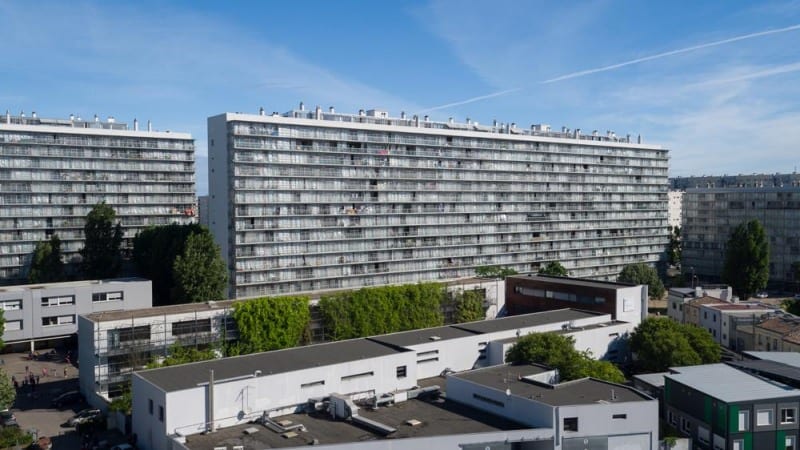 “Demolishing is a decision of easiness and short term,” says Anne Lacaton, “It is a waste of many things – a waste of energy, a waste of material, and a waste of history. Moreover, it has a very negative social impact. For us, it is an act of violence.”

The architects rebalance dormant or inefficient rooms to yield open spaces that accommodate greater movement and changing needs, thus lengthening the longevity of the buildings. Their most recent transformation of Palais de Tokyo (Paris, France 2012), after a restoration of the space more than a  decade earlier, increased the museum by 20,000 square meters, in part by creating new underground space, and assuring that every area of the building is reserved for the user experience. 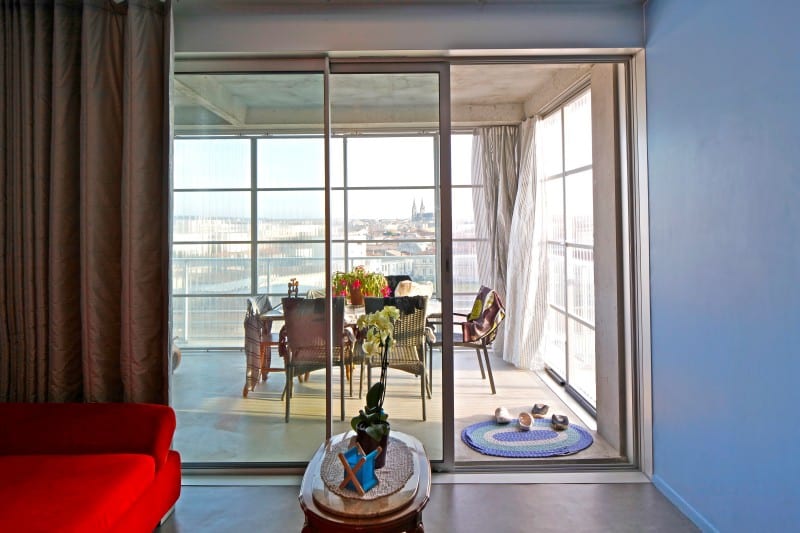 Retreating from white cube galleries and guided pathways that are characteristic of many contemporary art museums, the architects instead created voluminous, unfinished spaces. These spaces allow artists and curators to create boundless exhibitions for all mediums of art within a range of physical environments, from dark and cavernous to transparent and sunlit, that encourage visitors to linger.

Lacaton insists, “Transformation is the opportunity of doing more and better with what is already existing.” 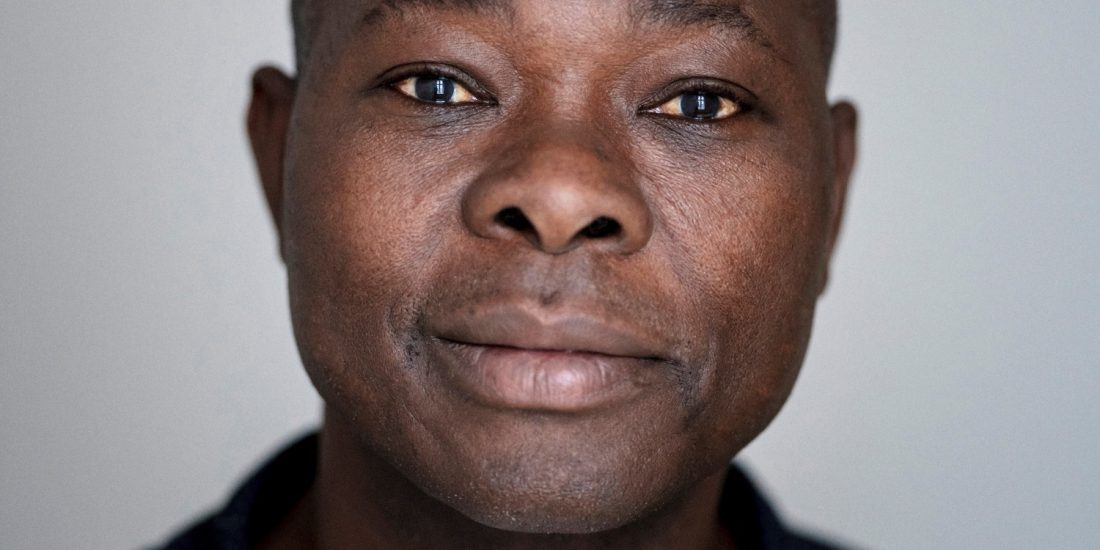 Diébédo Francis Kéré, architect, educator and social activist is the 2022 Laureate of the Pritzker Architecture Prize,