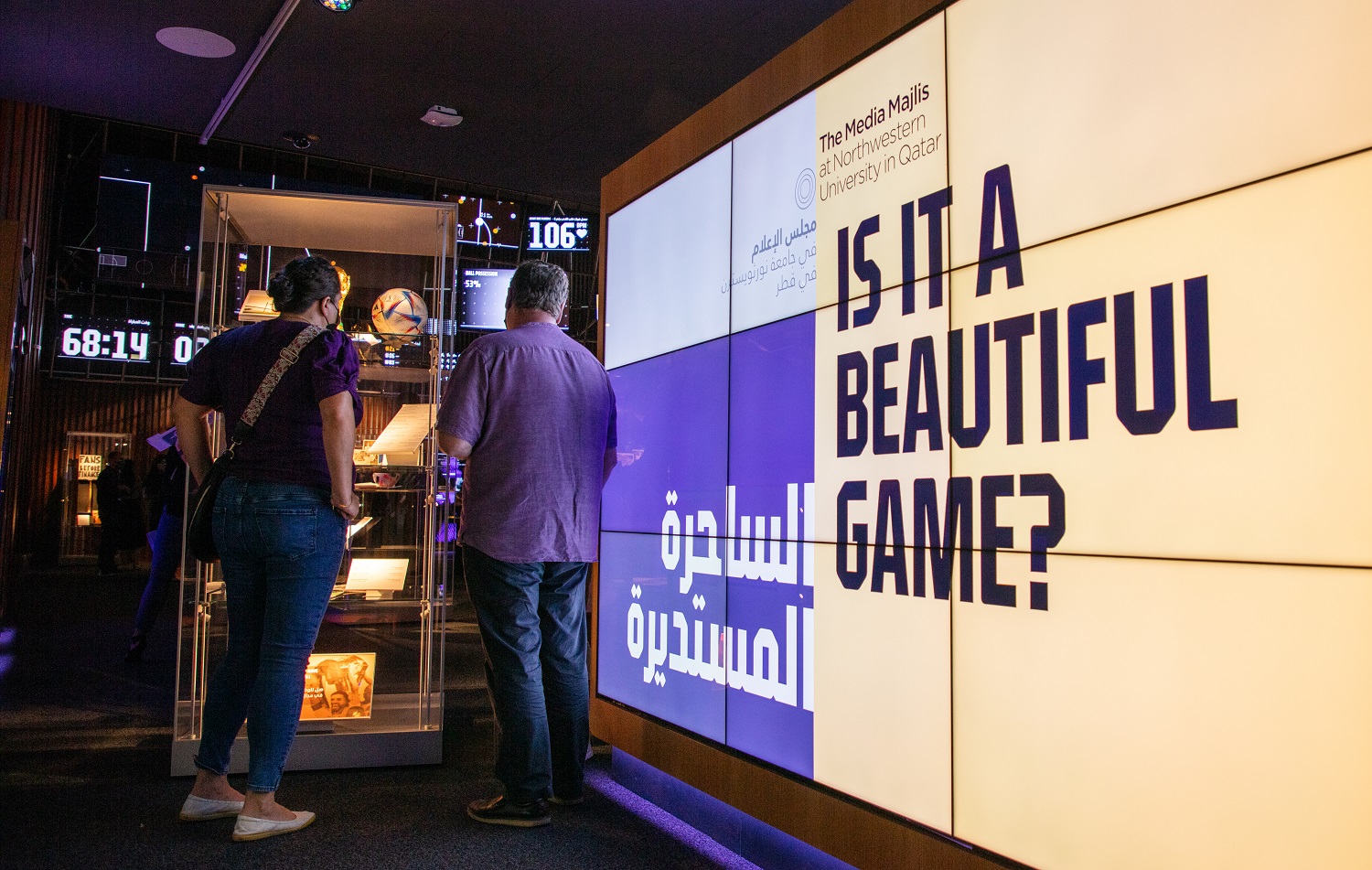 It seems impertinent to ask this question when Qatar is amid one of the most anticipated moments in its history, the FIFA World Cup 2022 set to happen in two weeks’ time. But for The Media Majlis at Northwestern University in Qatar, a museum dedicated to exploring journalism, communication, and media, situated just a stone’s throw away from the Education City stadium, and across the road from the International Broadcast Centre which will house media from around the world, teaching two journalism courses, it seemed imperative that they explore and understand the inextricable relationship between the game and media. With just two weeks before the exhibition ends, this could perhaps be the best time to visit The Media Majlis as it investigates the multiple characters the media play when mediating football to the world. Afterall is it such a beautiful game? By Sindhu Nair 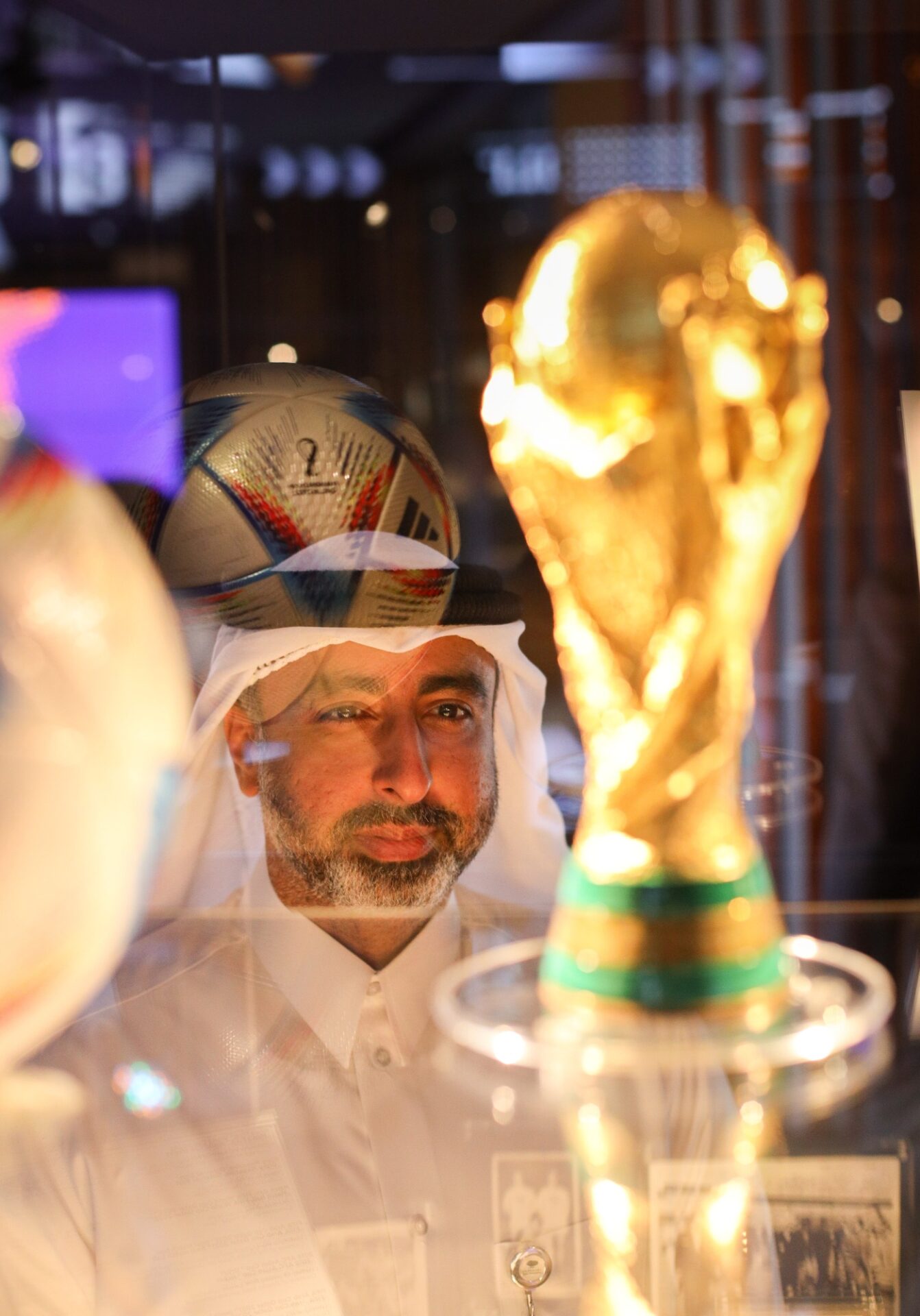 To touch all the perspectives of this research-based exhibition, it seems fitting that the curator’s sensibilities are not swayed by the love for the game. And that is why Jack Thomas Taylor, Associate Curator and Manager of Exhibition Planning at The Media Majlis was perfect for the job at hand. He looked at the game objectively, possible only for a non-football lover, and as he takes SCALE around explaining the multiple questions that arise as we look at aspects of the game that we have not considered before, it is obvious that Taylor and the team at The Media Majlis have done their research thoroughly. 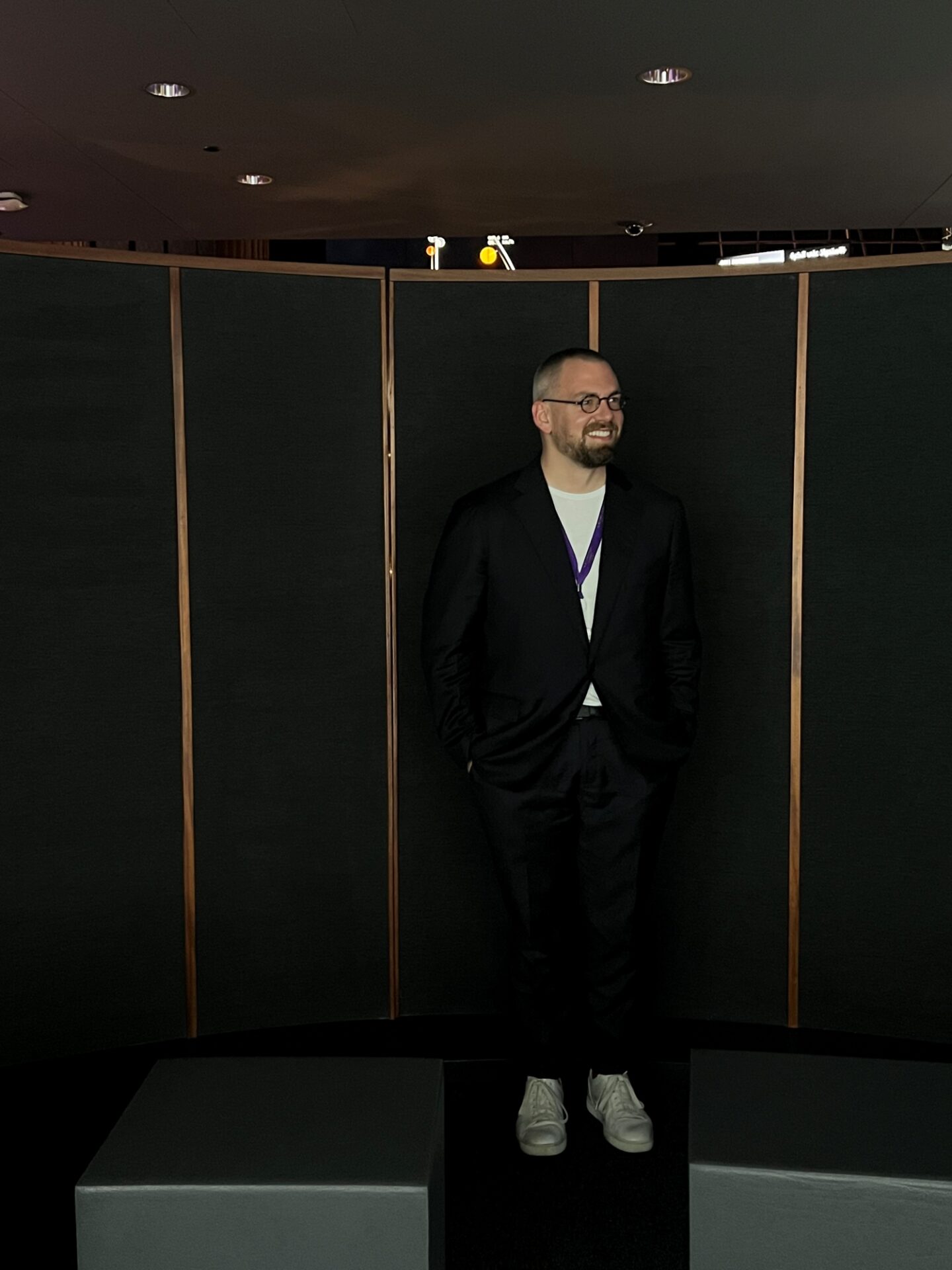 “Every exhibition that we develop starts with a question which then informs our research inquiry and the content that makes up that exhibition. Unlike most museums, we do not have a collection of our own, and therefore the content that you see today is borrowed and licensed from institutions near and far,” explains Taylor, a media professional who later moved on to a career in museum curation after a degree in the same. 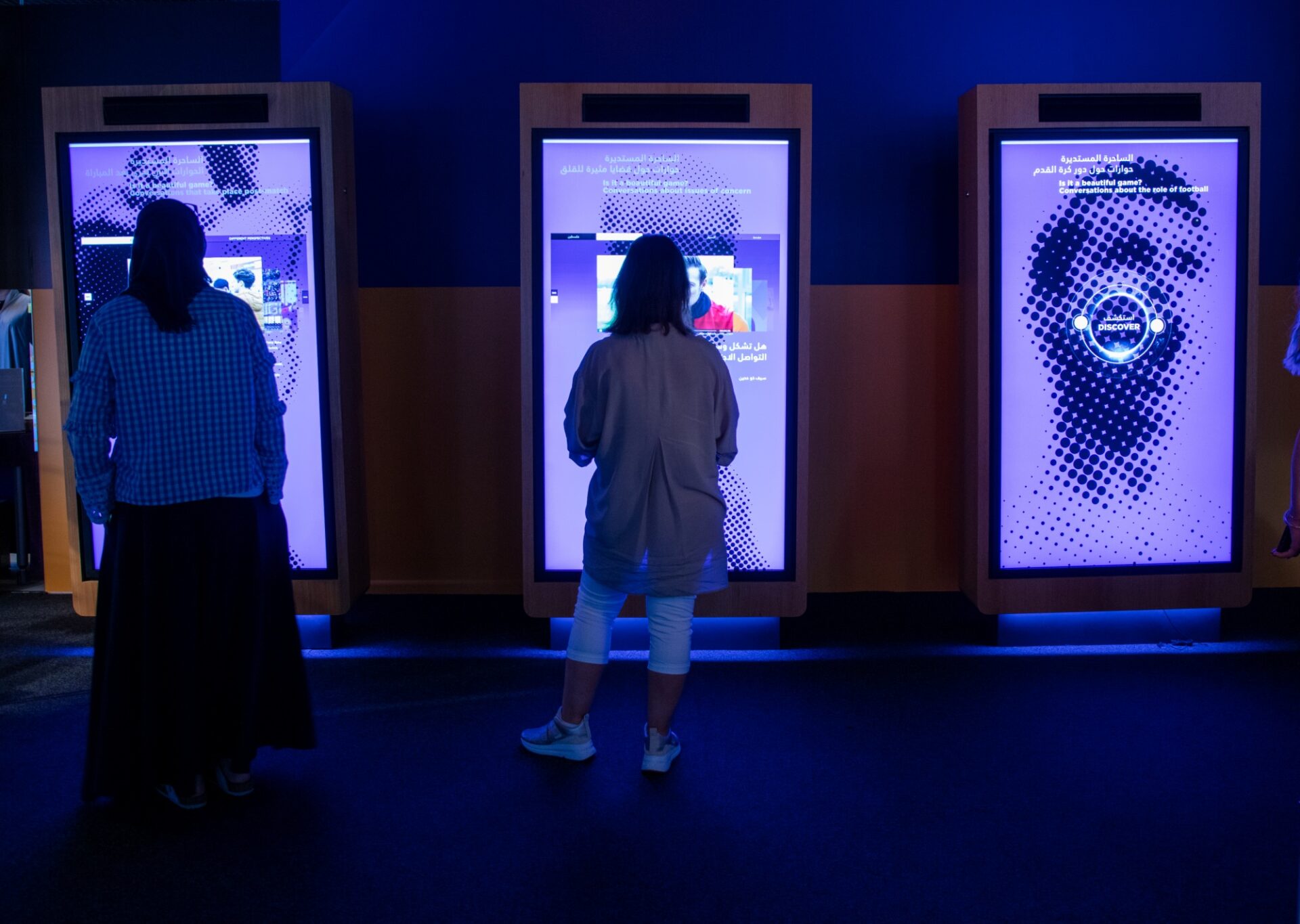 The interactive Off the Pitch part of the exhibition that takes us through stories of bias and discrimination in the Game.

The Media Majlis goes beyond curation for any exhibition they bring out. “As a museum we believe there is always another side,” says Taylor, “The Media Majlis is an active space where visitors can participate, comment, and engage. We do not simply collect and commemorate media and journalism in its physical forms, we create opportunities to explore and interact with its content and messages.”

“A Beautiful Game is a phrase that was popularised by the Brazilian footballer Pelé, and later echoed by journalists and that became the starting point of our investigative exhibition,” explains Taylor, “We do not believe that the game is as beautiful as portrayed; it has beautiful aspects, the simplicity is beautiful, yet it is beautifully complex as well.” 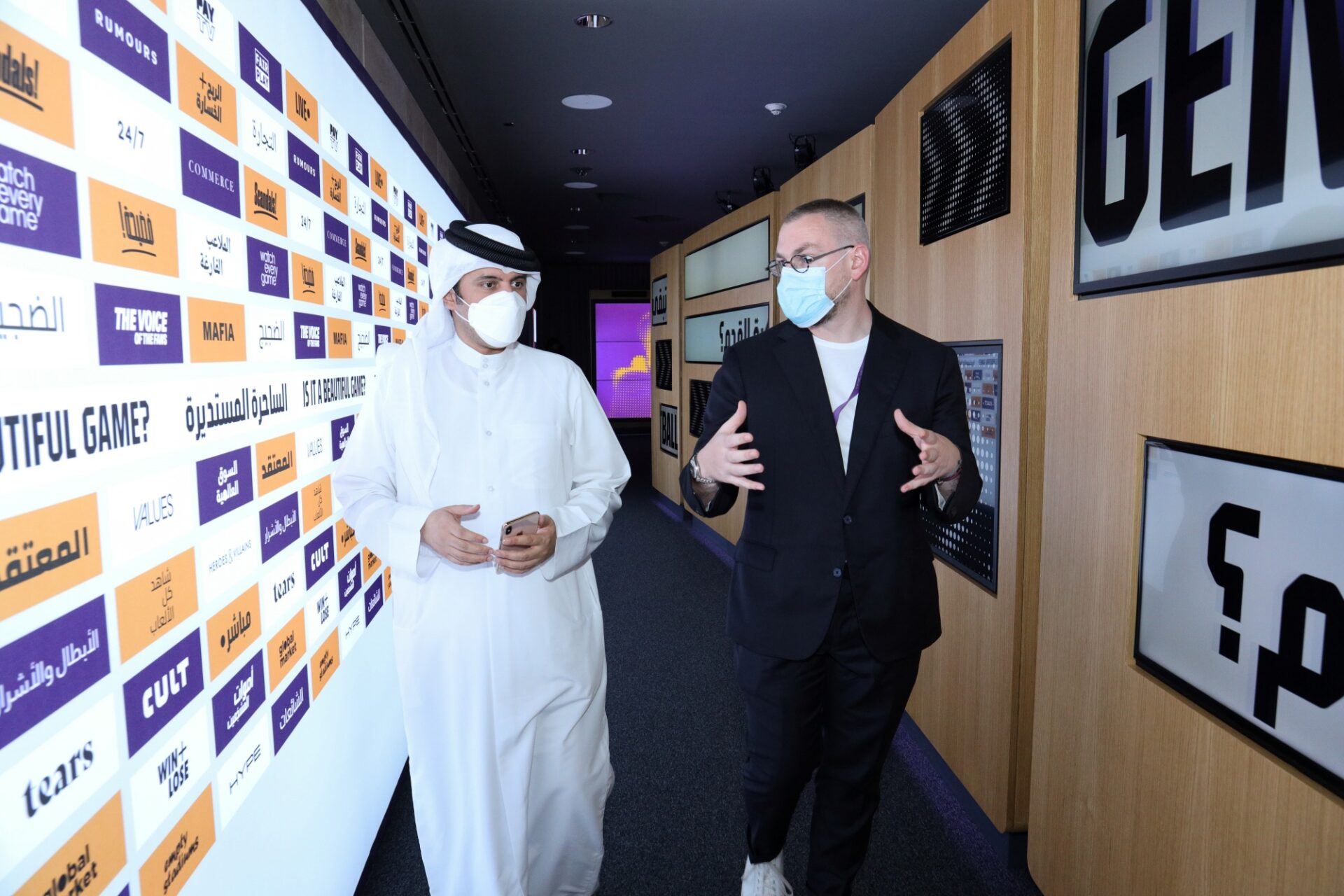 The Media Majlis exhibition Is it a Beautiful Game, opened its doors during Covid times…

The exhibition looked at three areas where the journalists and footballers converge, through the themes of Off the Pitch, Mixed Zone and Post Match.

While Qatar has taken significant steps having introduced significant labour reforms allowing migrant workers to change jobs without employer permission and setting a higher and non-discriminatory minimum wage, the country is not known to participate openly in discussions pertaining to these issues. So, we wonder how the curatorial team obtained information pertaining to these issues and what were the challenges faced to arrive at a fair, open, and engaging content for this exhibition?

Taylor says that though there have been no objections faced by the curators to obtain content that discusses issues that can sometimes be deemed as sensitive, such as allegations of corruption, there has been some reluctance by organizations to be involved.

“We know that not every visitor will engage with every aspect of the exhibition, and some will not notice the omissions we are aware of, but when you visit and move through the space, we encourage you to identify the gaps in the narratives and ask yourself why certain things are missing and why some football and media community members are not present,” he says, expressing the intent of The Media Majlis to continue upping their game of looking at every side of the matter.

Subjects that were focussed on like women’s participation in the game, of countries like Iran banning women from watching a live football match and discrimination when it comes to nationality, race and colour are touched on in Off the Pitch, which brings together conversations off the pitch, germinating seeds of doubt in the viewers mind on the question, “Is it a beautiful game?”

The money involved in the business of Football.

Off the Pitch explains the lucrative relationship between football and media broadcasting rights.  A film made by the museum’s research team unveils fans’ relationships with football, centred around commercialism and consumerism masked as casual and harmless entertainment.

“We try our best to license content from existing sources but in some instances the narratives that we would like to include do not exist. In this scenario, we collaborate with content creators to make our own films—a mixture of in-house, student and external talent coming together to get the right story across,” explains Taylor.

“In another segment of Conversations off the Pitch, we include content that explores fairness in the game and the politics of match fixing. We included content that looked at investigations by Amnesty International regarding human rights issues in Qatar, but we also include content that talks about Russia’s hosting of the world cup and how they are not immune to exploiting human rights, too. This is not a Qatar thing, it’s unfortunately a global and universal problem that we have in society,” he says. 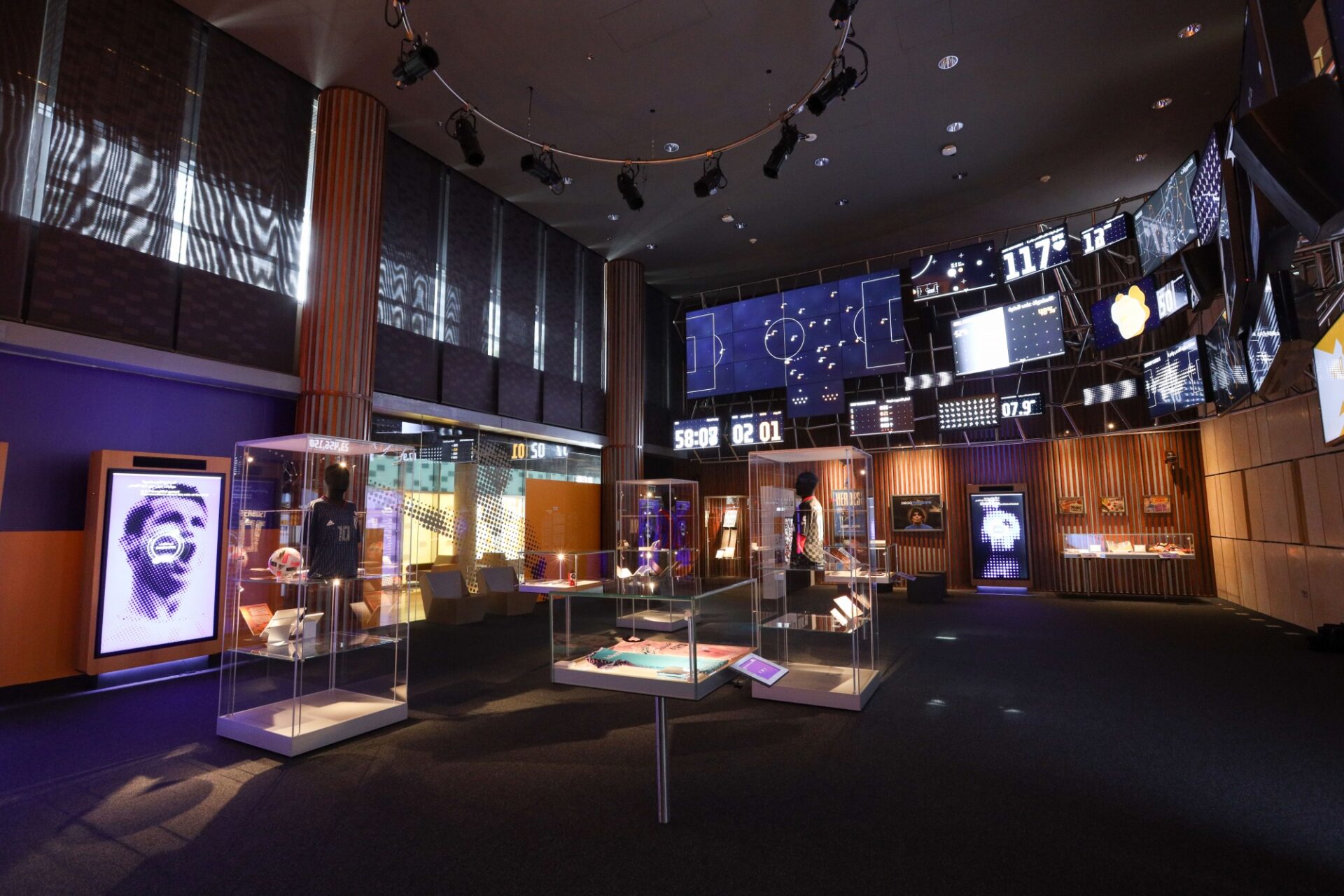 Beauty in Codes; the Game explained through codes. 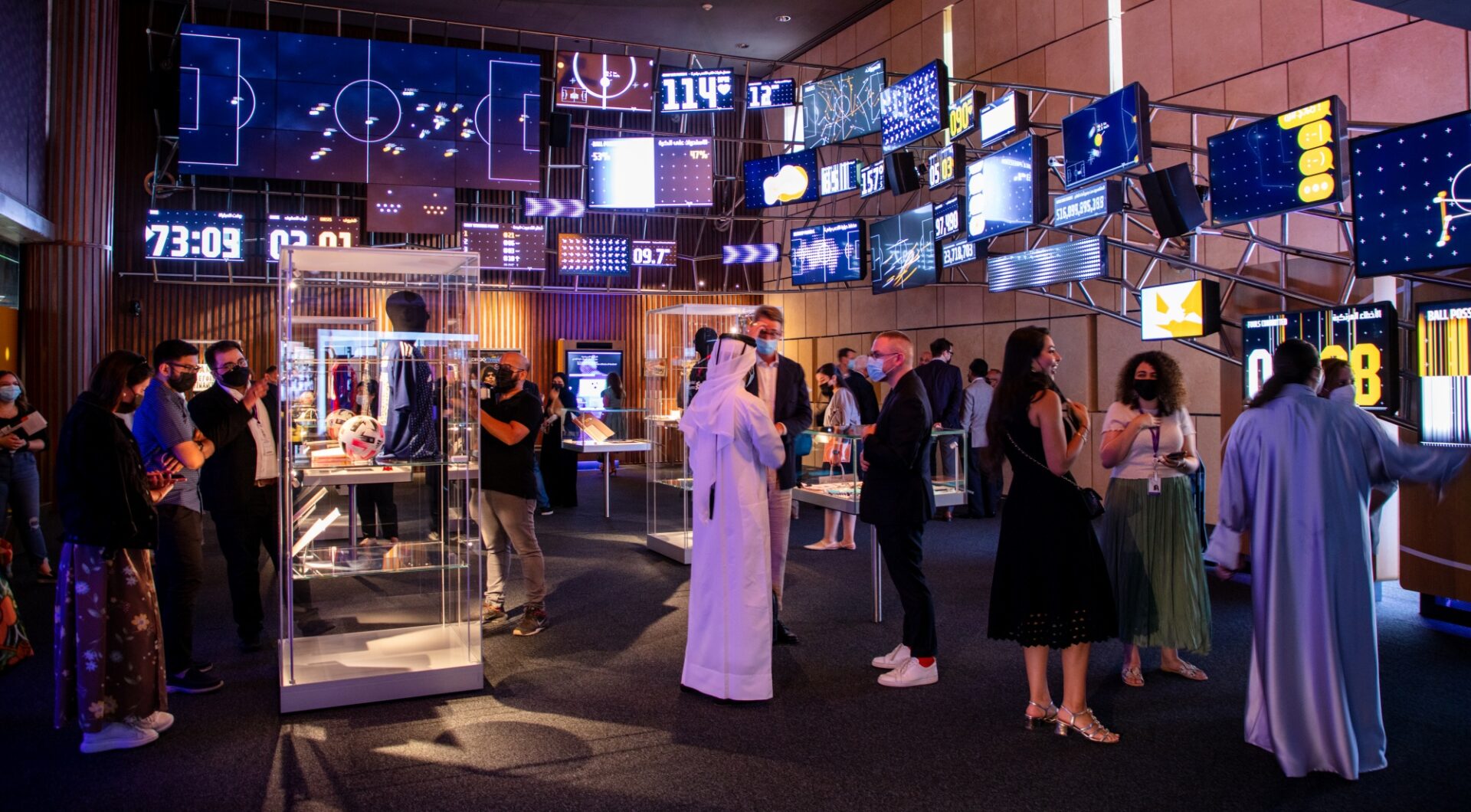 “Numbers help provide the narrative, the drama, and the conversation. From managers in the locker room to commentators in the newsroom and fans on social media, match statistics, player performance, and historical results are used to analyse every action, both on and off the pitch. Based on this data, players are bought, sold, loved, or reviled,” says Taylor. 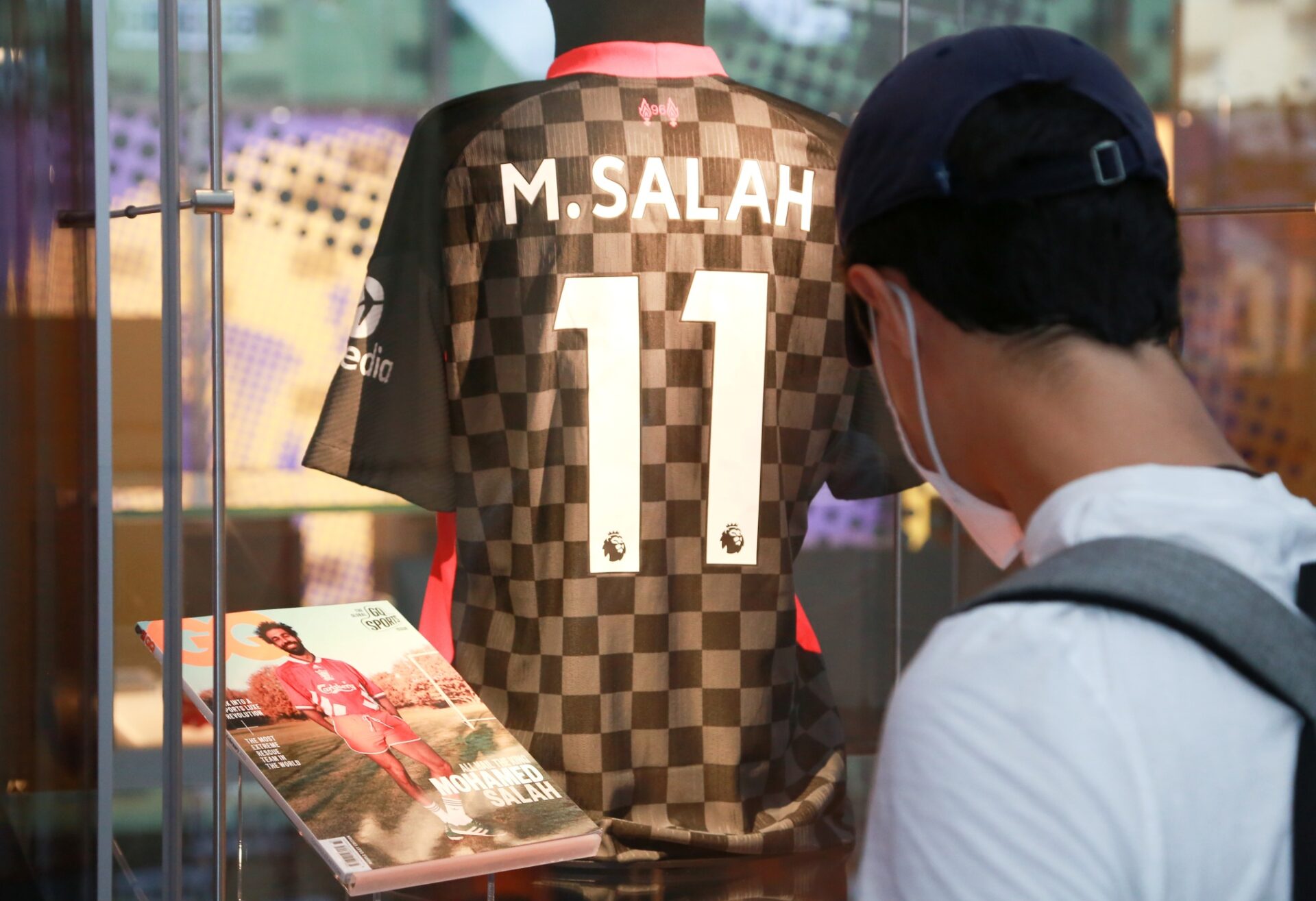 The popular story of Mohammed Salah. 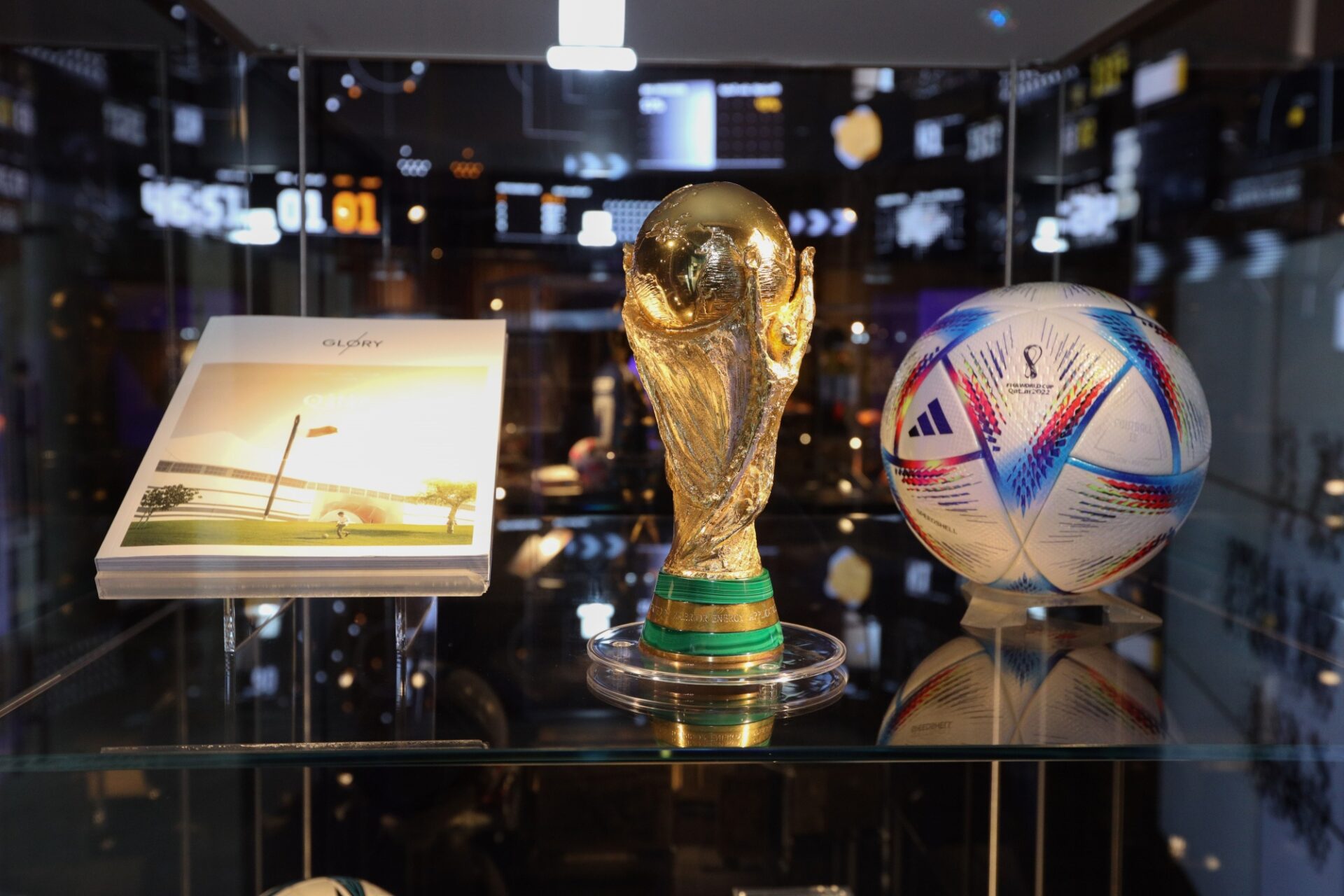 Other exhibits in the Mixed Zone include the jersey of Mohammed Salah, who with 250 appearance, 156 goals, and with his latest Liverpool contract, takes the position of being the highest paid player in the club’s history. His story to football stardom is also chronicled.

The exhibition makes its impact through visual stories, interactive media, and technology to bring to life the beautiful game and by the time you have walked through The Media Majlis, you ask yourself, is it a beautiful game, after all?

Taking place at The Media Majlis at Northwestern University in Qatar, the exhibition is open Saturday to Wednesday, from 10am to 5pm, until 12 November 2022. Entry is free of charge.

All Images Courtesy The Media Majlis 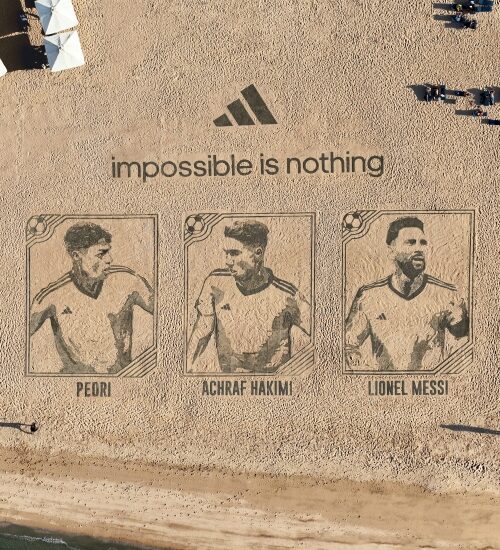 To celebrate the world’s largest family reunion, the FIFA WORLD CUP 2022 in Qatar, Adidas has created 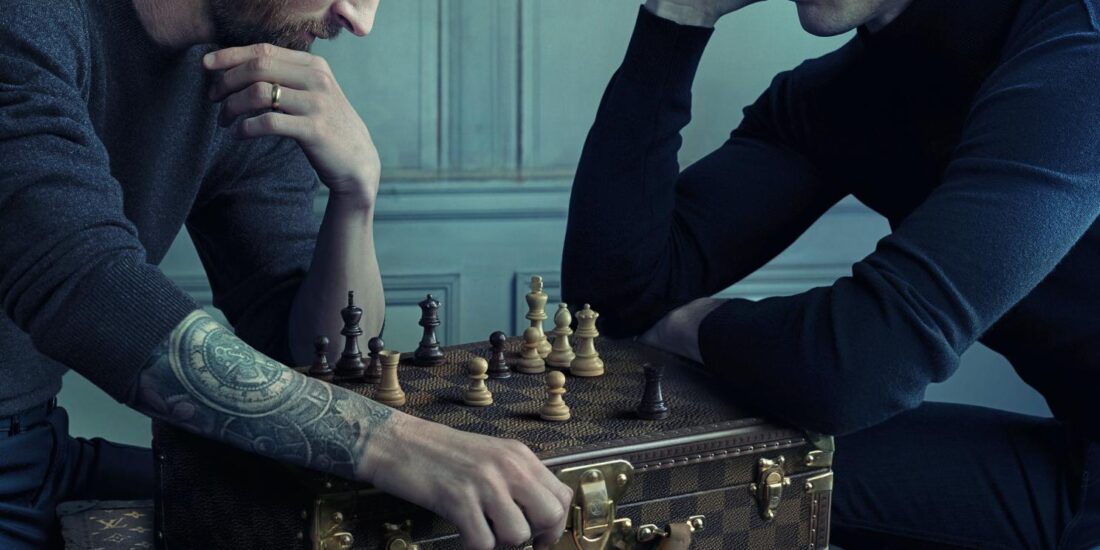 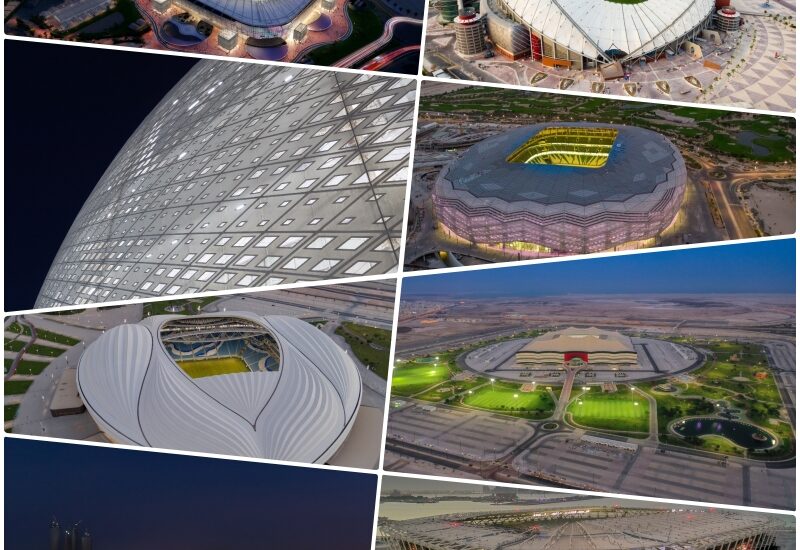