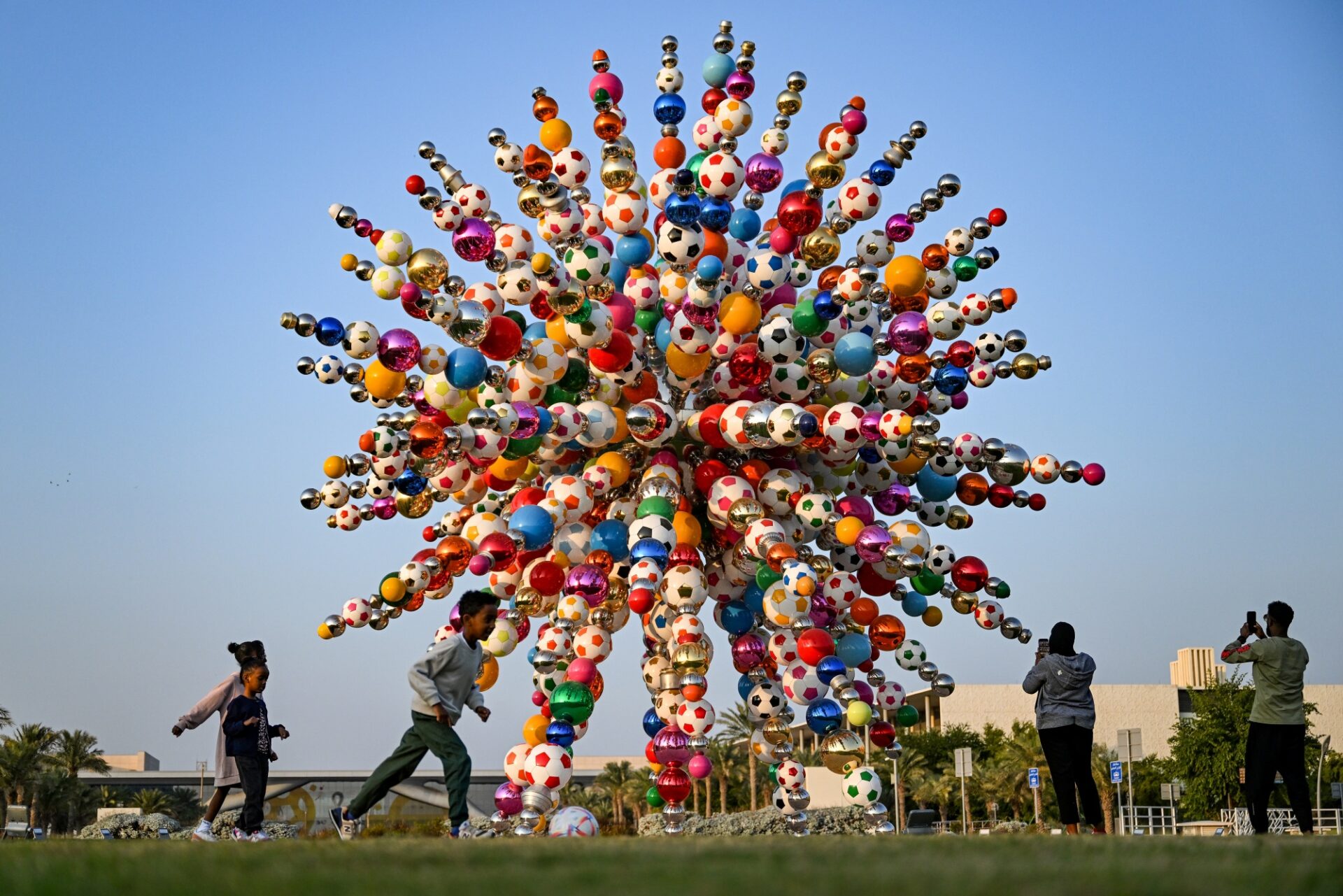 When football fans of the world met in Qatar for the FIFA World Cup 2022, art and architecture took the role of a beautiful canvas, converting the city of Doha and its stadiums to an open-air museum creating the perfect backdrop for the most talked about event of the year. Education City, the campus of the Qatar Foundation Universities, kept to this brief and revealed a colourful new installation in November 2022 by Korean artist Choi Jeong Hwa that tells its story in layers and spheres as we interact with the installation. We look at the story behind this installation that reminds us of the contributions of labourers in building the city and stadiums while we also look at other installations within the campus. 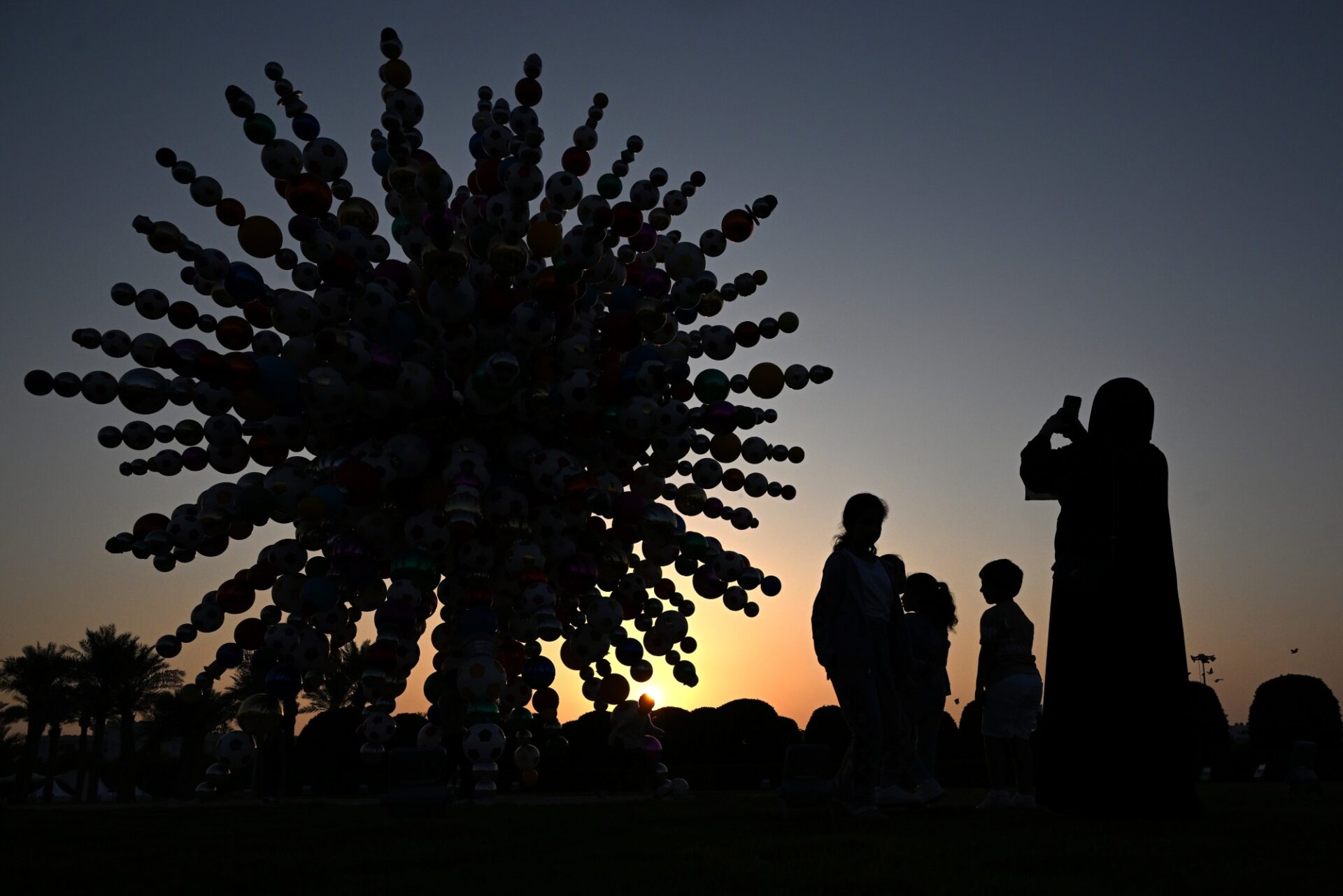 That the entire country is exhibiting art in some way or the other is a given in Qatar. While most of the art on display is at the behest of the Qatar Museums, the state-run-arts arm of the country, the Qatar Foundations Art programme, part of Qatar Foundation (QF), another state-run-education-arm of the country, played its role to support inclusive artistic exploration, multidisciplinary connections, and thought-leadership in the visual arts, infusing Education City and its periphery with creativity.

QF is home to a significant art collection – both public and institutional. Qatar Foundation’s 150-strong collection of public art includes works by Qatari and international artists such as: Damien Hirst, Judy Ledgerwood, Jaume Plensa and M.F. Husain. And it had a recent installation which drew attention to the underlying labour issues that mars the euphoric cloud of FIFA World Cup 2022 in Qatar. 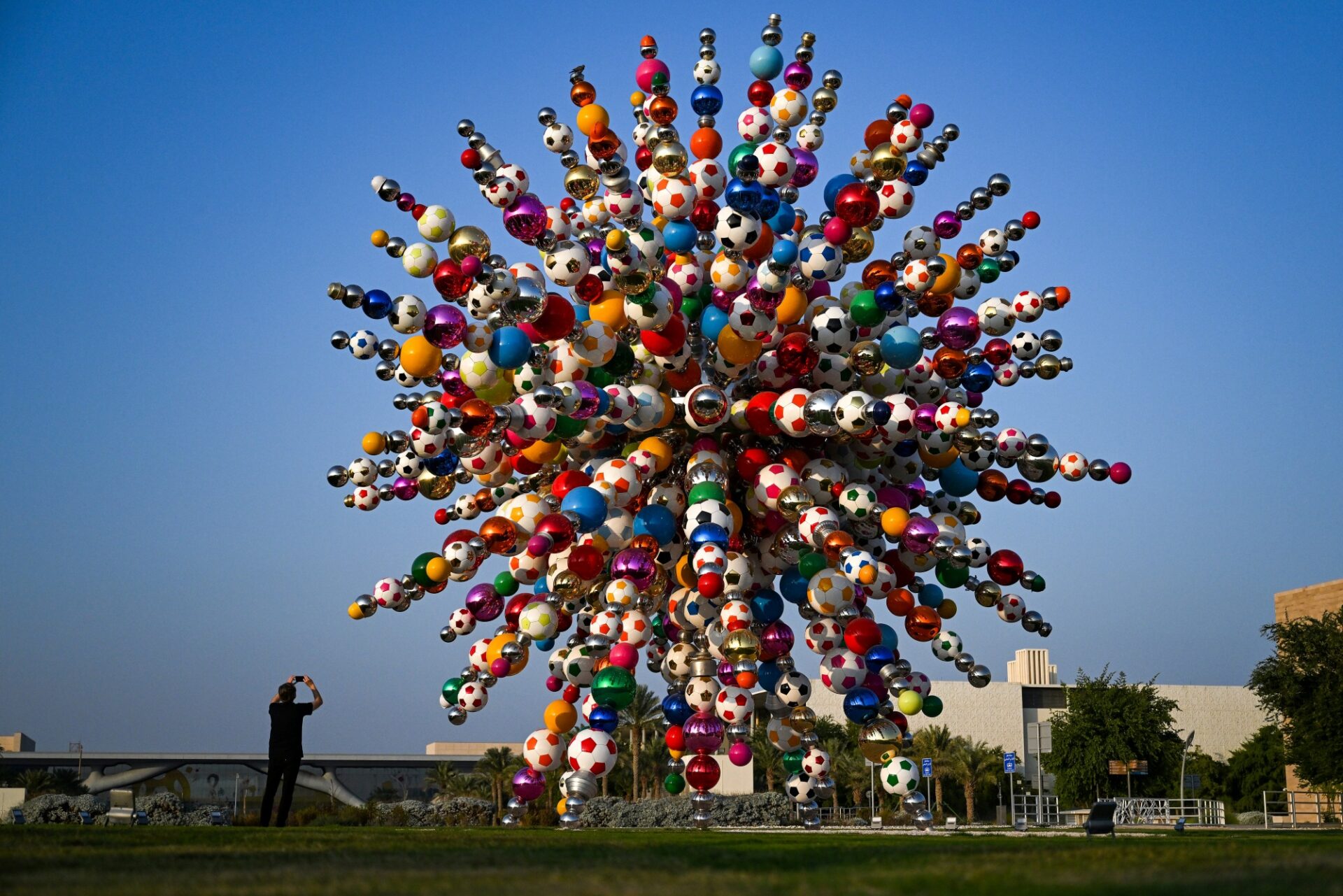 ‘Come Together’ by the Korean artist Choi Jeong Hwa

Placed strategically on the Education City grounds, close to the QF headquarters, on a walkway that connects other institutions is ‘Come Together’ by the Korean artist Choi Jeong Hwa, commissioned by HH Sheikha Moza bint Nasser, the mother of the Amir of Qatar and the Chairperson of QF. HH Sheikha Mozah was inspired by an earlier work of the Korean artist where he used kitchenware donated by members of the public from several cities throughout South Korea and thus commissioned him to work on an installation that was a tribute to the workers and the local community of Qatar, both of whose contribution to the country was immeasurable. 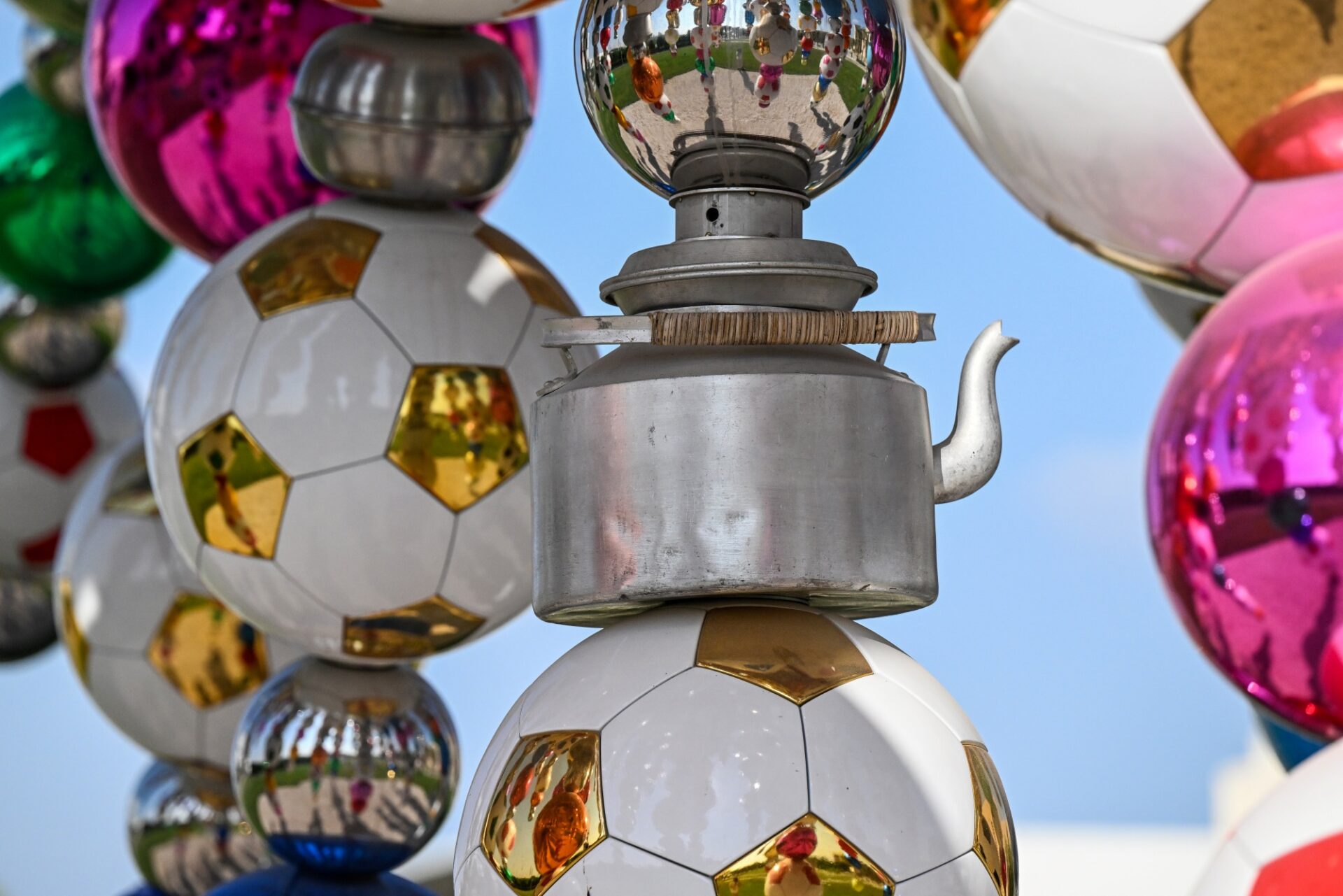 Used utensils form a part of this colourful installation.

This colourful 12-metre-high stainless-steel structure has various spheres strung together on 100 different branches. Fashioned to resemble a dandelion, the spheres include footballs, mirror balls interspersed by Qatari kitchenware, sourced from local households and worker’s safety helmets. 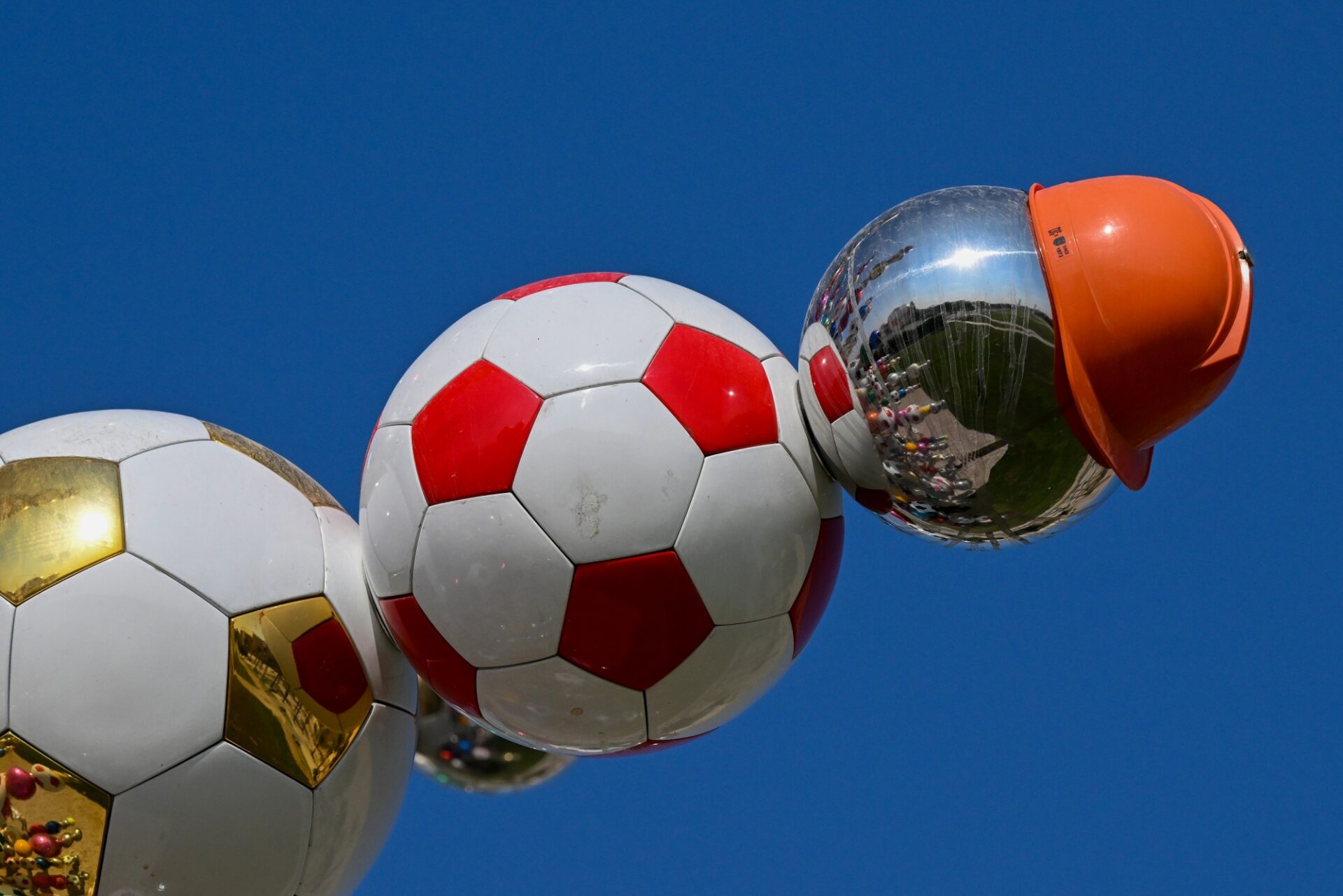 A commomeration to the labourers who built the city and its stadiums. 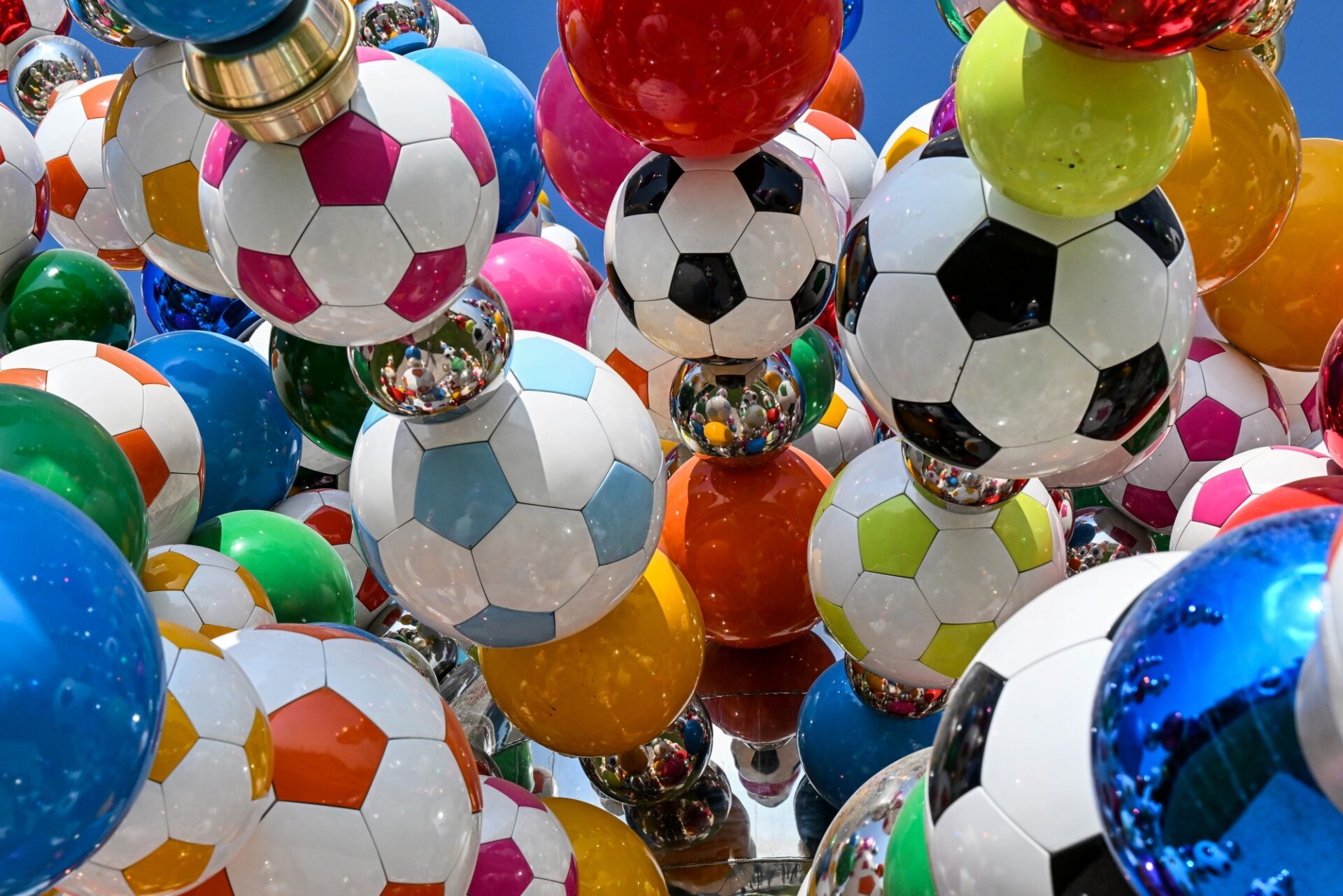 The structure pays tribute to the faceless workers who built the stadiums for the FIFA World Cup 2022 by incorporating the helmets used in construction, though these are not “real” used helmets.

The location of the artwork was chosen to encourage interactive exchanges, according to Layla Bacha, project manager, art portfolio, Qatar Foundation.

She recounts the initial positive responses to the artwork even before the story of the installation was revealed ranging from “a virus” to “so colourful that it could be hugged”, “a joyful work”. This exemplifies the reason public art has gained so much more significance in the art world for the immediate responses and dialogues that it initiates from a larger group of people, from experts to novices, which speaks volumes on the power of art in instigating conversations on topics that might otherwise be considered taboo. 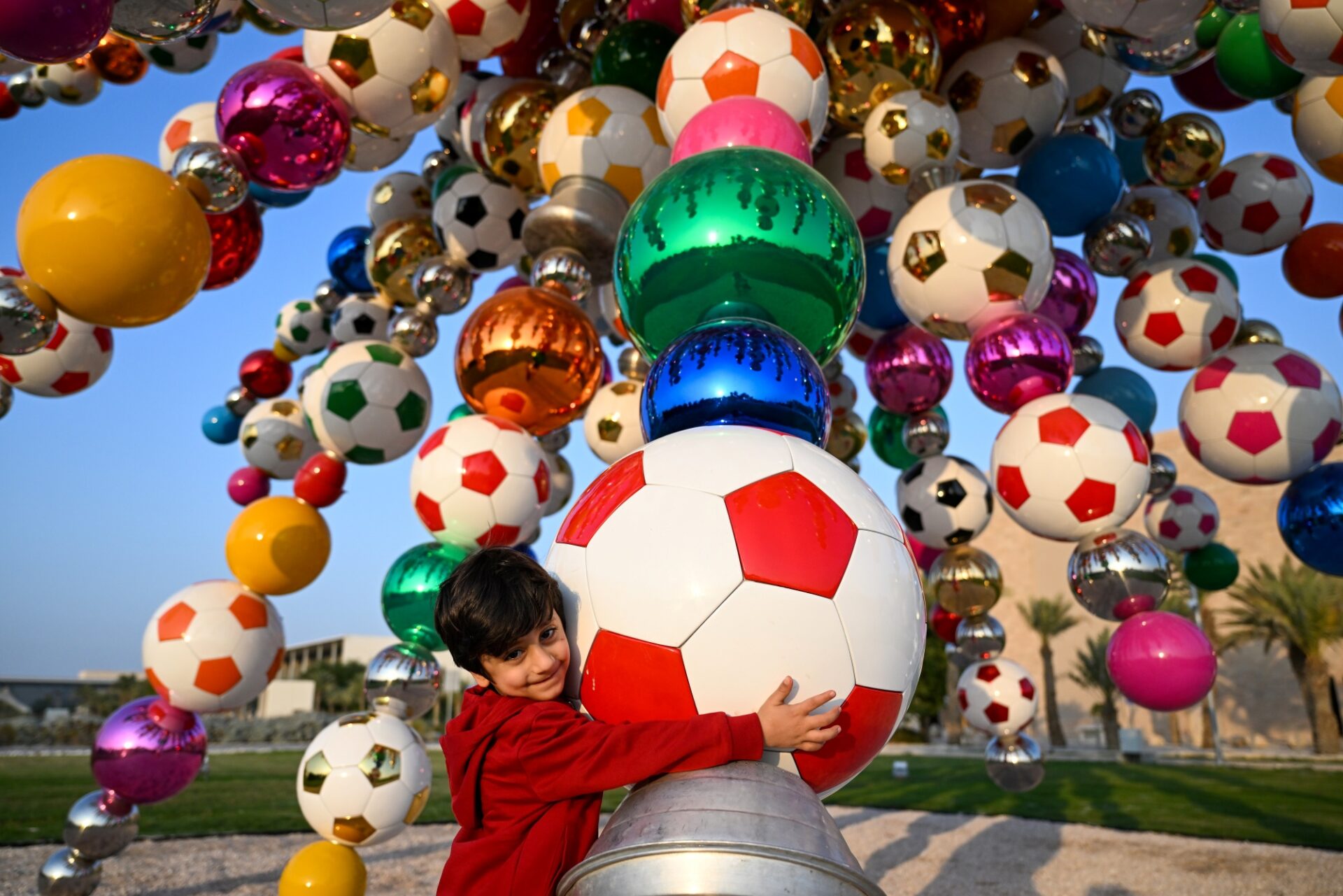 “I want to hug it,” say viewers while experiencing Coming Together.

‘Come Together’ reflects how QF is determined to spur dialogue on key social issues, and to using its platforms and resources to affect change, whether it is through education, research, policymaking, or raising social awareness.

Choi Jeong Hwa says: “The enthusiasm of football fans all over the world, the dynamism of the athletes, and the industriousness of workers fly like seeds to create a magnificent and beautiful dandelion. Just as dandelion seeds are blown away by the wind, the message of the FIFA World Cup Qatar, which prays for peace and prosperity for mankind, will spread from here to all over the world.” 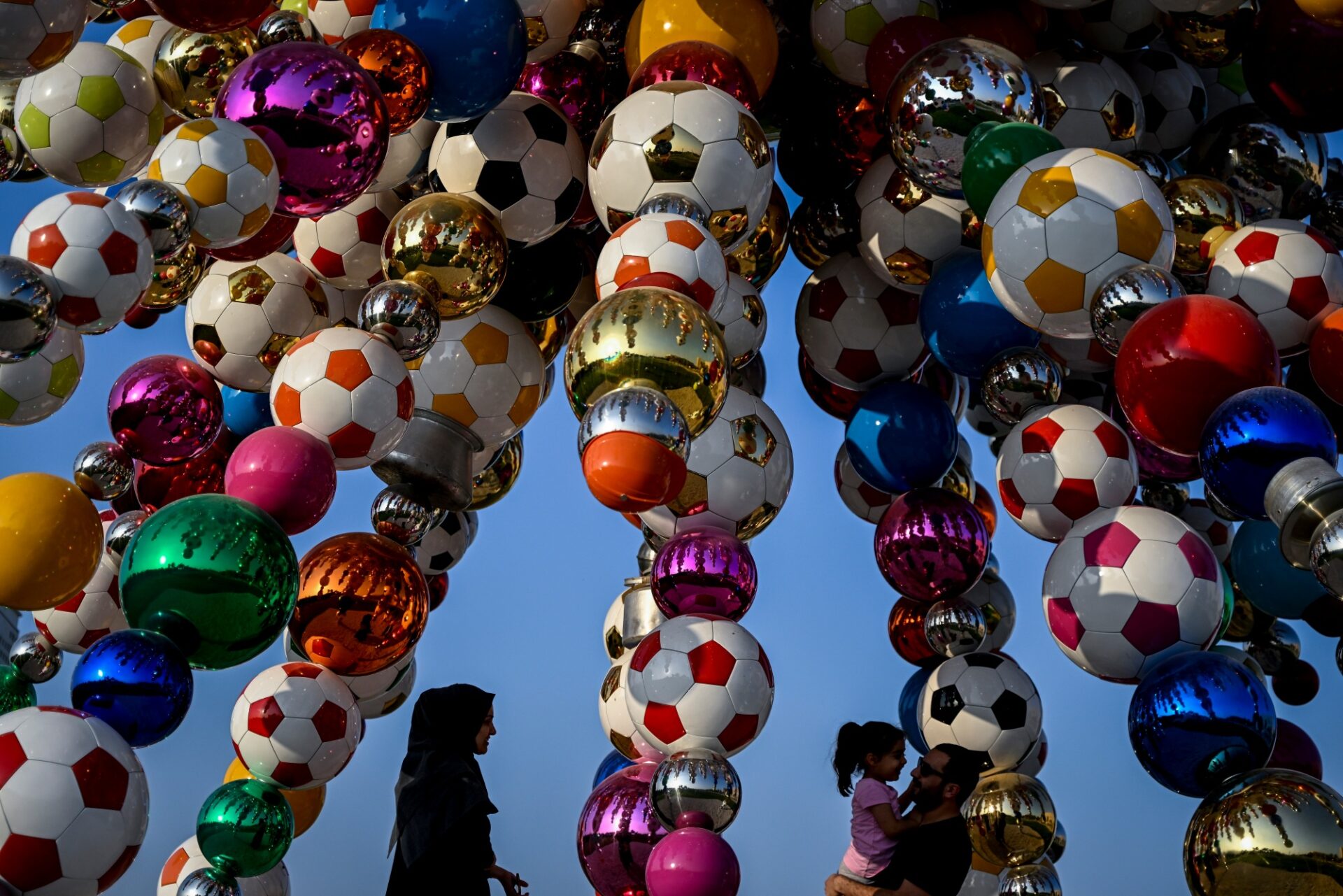 The artist believes that he is a facilitator of art, he is just the one delivering the message while he learnt by going out into the streets and spending time with strangers. “I look for more unconventional tools that are found in the house, and in the streets and markets, such as bowls and other common objects we use in our daily life. And as they are assembled in different ways to make an art piece, they are given a new life and meaning.”

He continues, “Art is something to become, not to be made. Therefore, I can say that materials inspire me. A lot of my work is made of discarded plastic items. Besides plastic, I use abandoned bowls made of various recycled materials, such as stainless steel, rubber, and nickel-silver. Many people see these and think of environmental issues, like extinction. But others see beyond that. They see them as metaphor about life and living beyond environmental or social issues.”

The QF headquarters is designed by OMA and is a geometrical concrete box punctured on all four sides by a grid of small windows, creating a pixelated image of the QF logo – a Sidra tree. 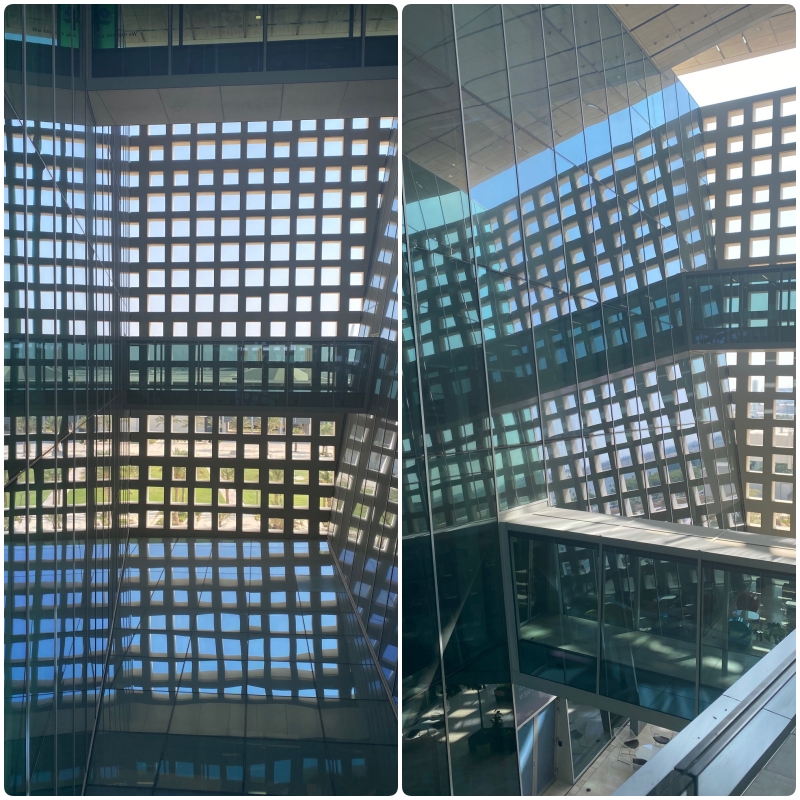 The QF HQ, a geometrical plethora by OMA.

Inside, the building is divided into blocks that are accessed via a grand central atrium. This space is naturally illuminated through a concrete and glass roof that matches the exterior walls, and is dominated by glass and aluminium. Glass bridges traverse the atrium’s upper levels, while mezzanine balconies offer views between storeys and the view from these balconies are spectacular. 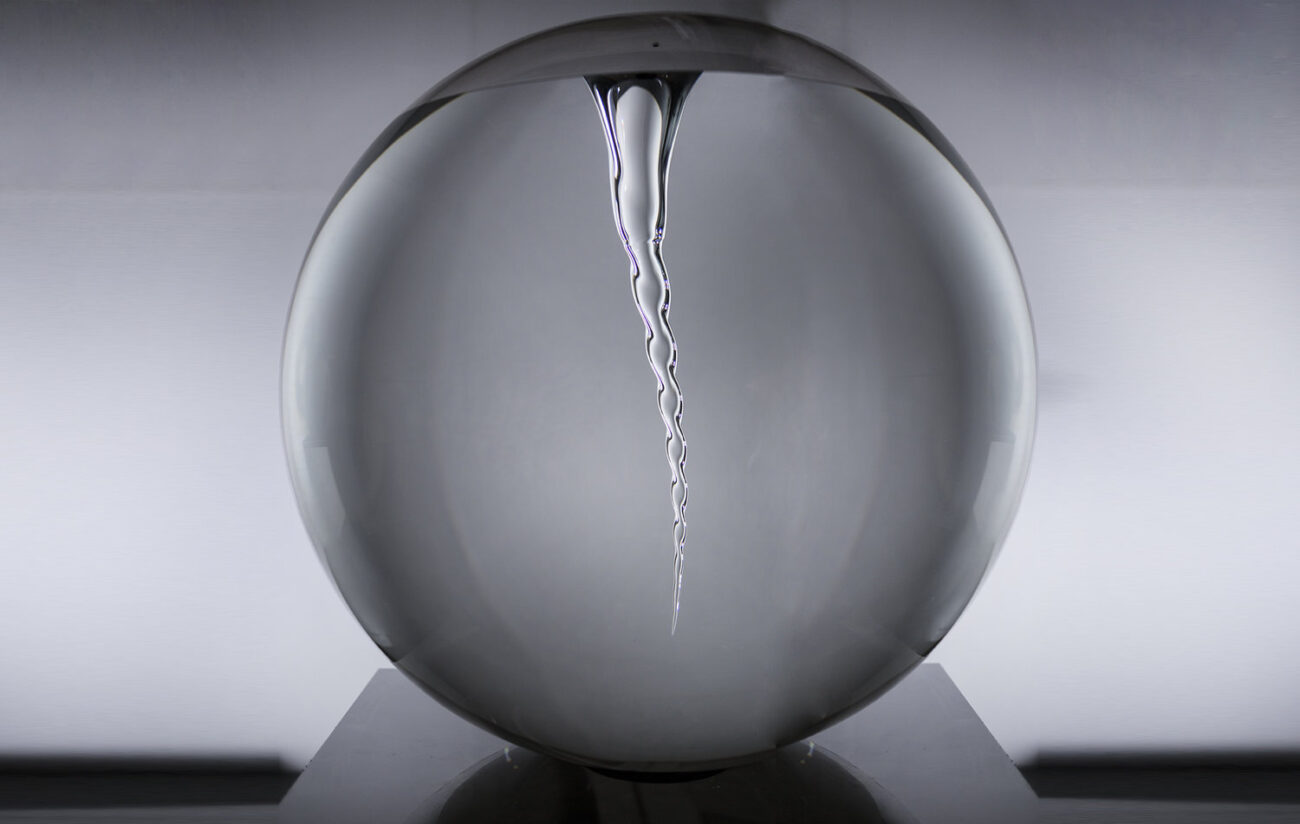 Though the harsh geometry seems overwhelming at times, nestled in the fourth-floor balcony is a work of art, Vanishing Point by Petroc Sesti a British artist, that blends with the surrounding glass and geometry and softens the harshness of the setting. A meditative piece that seems to merge with its surrounding while standing apart in its circular shape reflects the squares and cuboids all around it. The swirling water within the sphere that is placed on a plinth for perfect viewing, reflects the faces looking at it and Education City in which it is located.

Sesti’s artwork pushes the boundaries of art and science, exploring the ever-changing relationship between artwork, the viewer, and the setting in which it is placed. 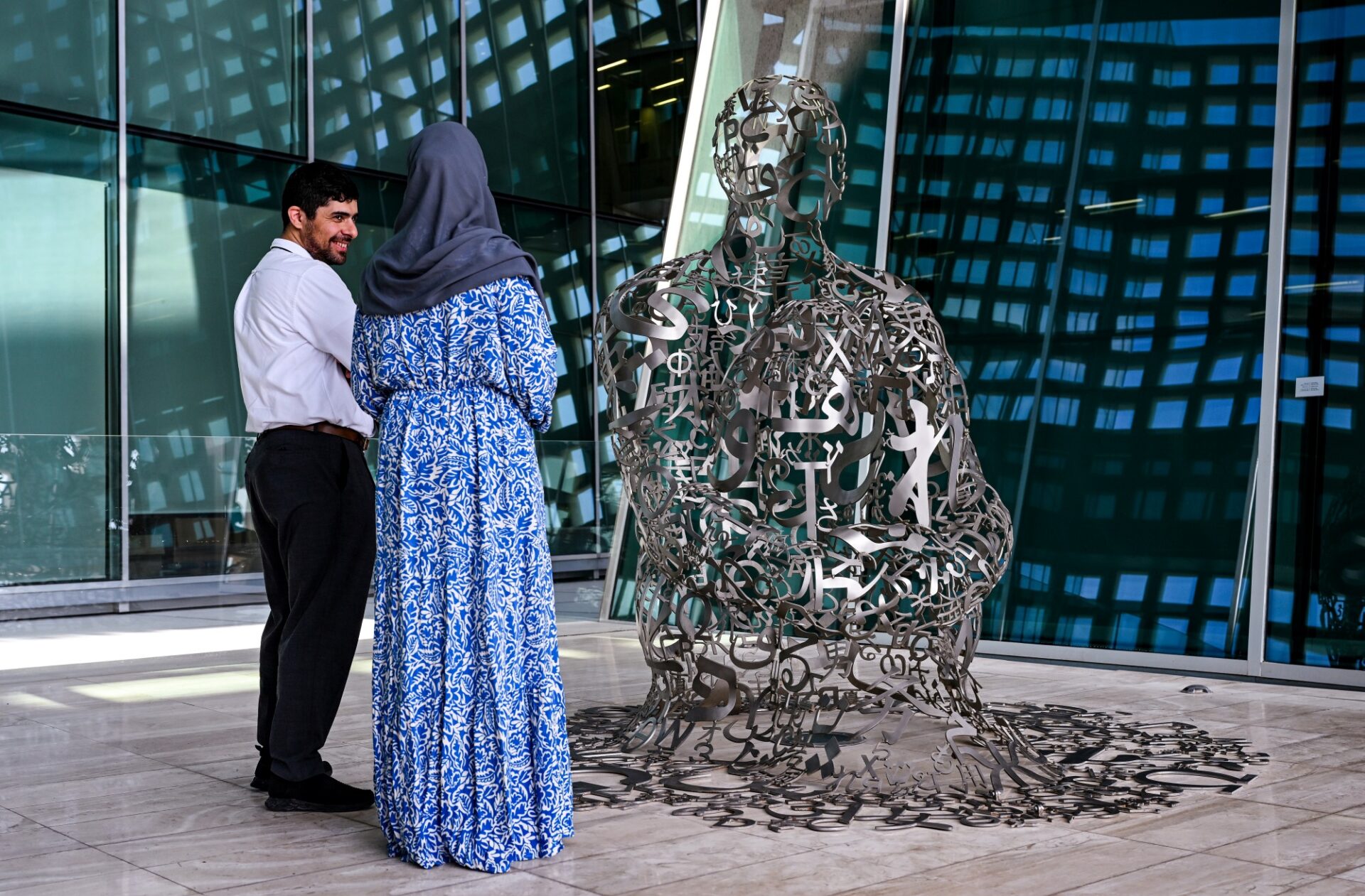 The next artwork on the same floor is by internationally renowned Spanish artist Jaume Plensa who is celebrated for his large-scale, text-based sculptures in stainless steel. Towering over seven feet, Endless VI is a remarkable example of Plensa’s ability to weave symbols together in a compelling alphabetical chain that probes ideas of collective memory. This work depicts a seated figure with arms clasped around his body, the figure seems lost in thought, yet his muscles are coiled and tensed as if ready to spring into motion, embodying both meditation and action. 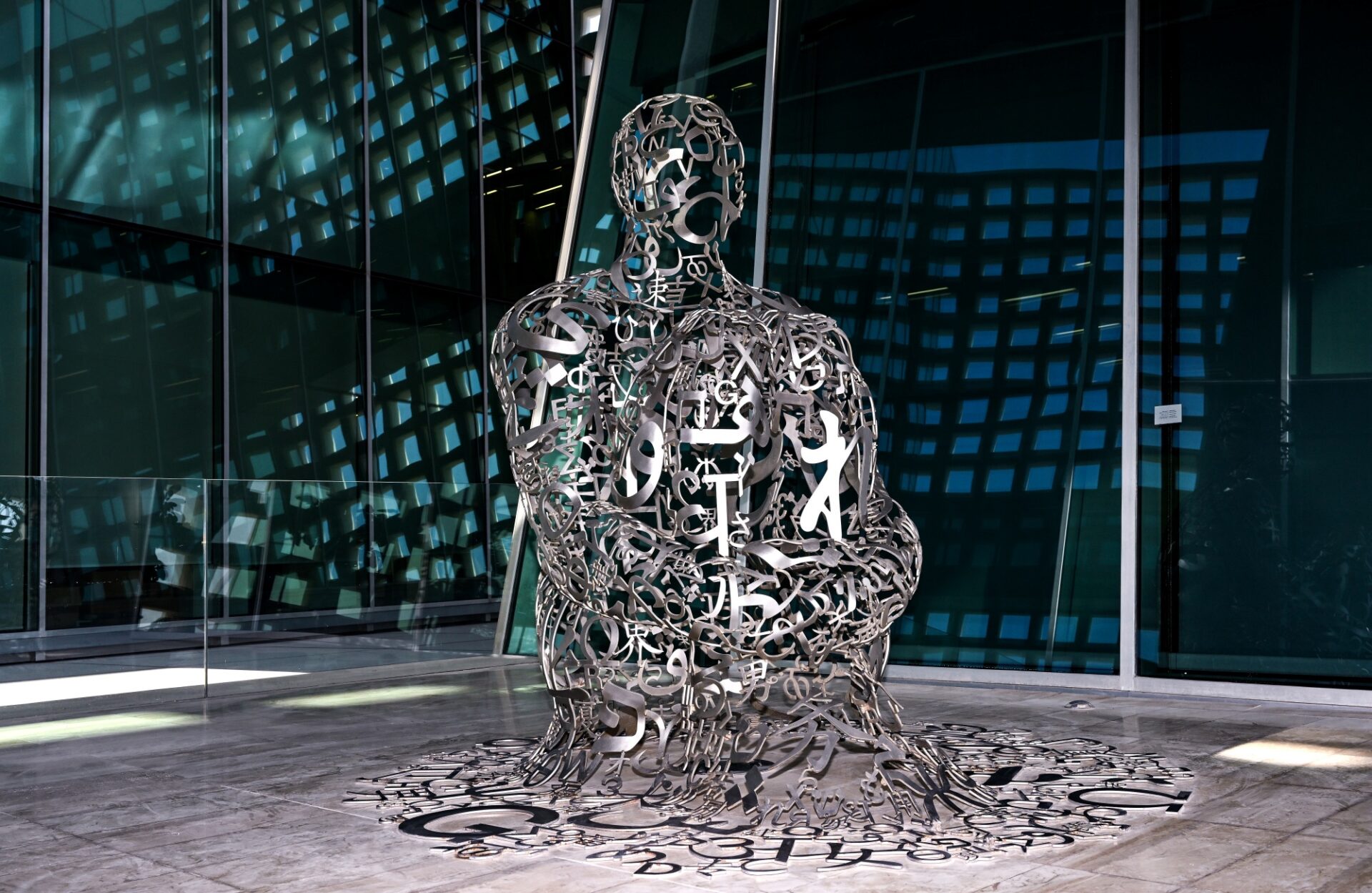 Letters that form us…

“Some say that the man is sad and some feel he is meditating,” says Bacha, “It all comes down to how each one perceives it that changes the entire meaning of the art form.”

Plensa draws together characters from diverse languages to suggest the rich multiculturalism of society. From English, Arabic, to Hebrew, Urdu and Hindi, the words connect and form a whole, directing the viewer to see the parts and arrive at the whole. 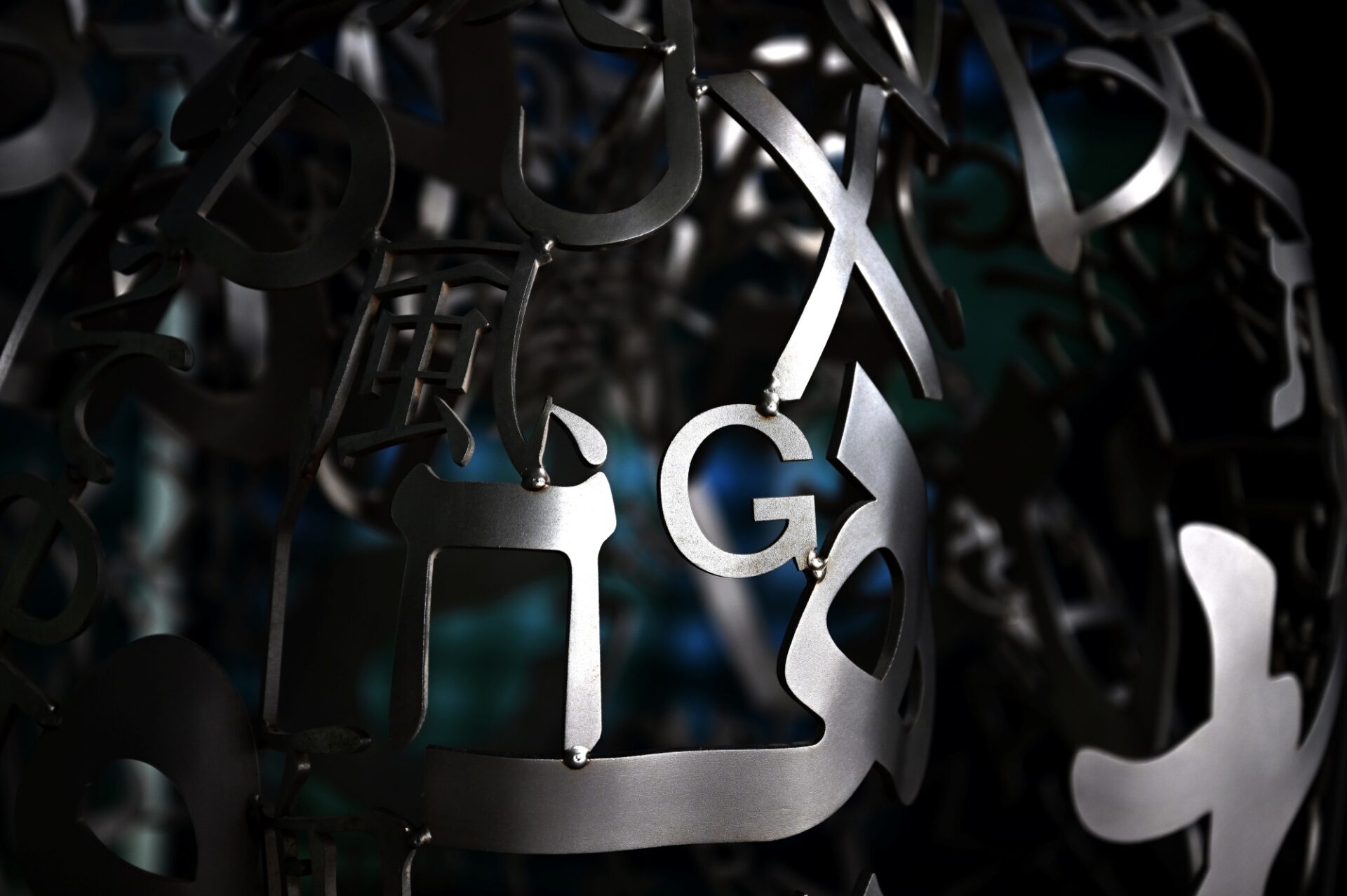 “One letter alone is nothing, but together with other letters you get a word. A word with a word becomes a text, and so on,” says the artist about this work.

“I understood the text as a beautiful metaphor about community, about society. One letter alone is nothing, but together with other letters you get a word. A word with a word becomes a text, and so on. A person alone is nothing, but together with others we become family, a neighbourhood, a city, a county, a country,” says Jaume Plensa, quoted in Chicago Gallery News.

As we head out to the entrance from the parking lot, we come to two artworks placed adjacent each other, both by powerful artists, yet not stealing the limelight from the other. The first and the more distinctive installation of the two, for its size is a towering  latticework by Shirazeh Houshiary, an Iran artist whose practice encompasses painting, installation, architectural projects, and films. The tower placed right at the foot of the staircase in QF is made from white anodised aluminium bricks that are hollow where one can see right through them, creating a web-like structure. 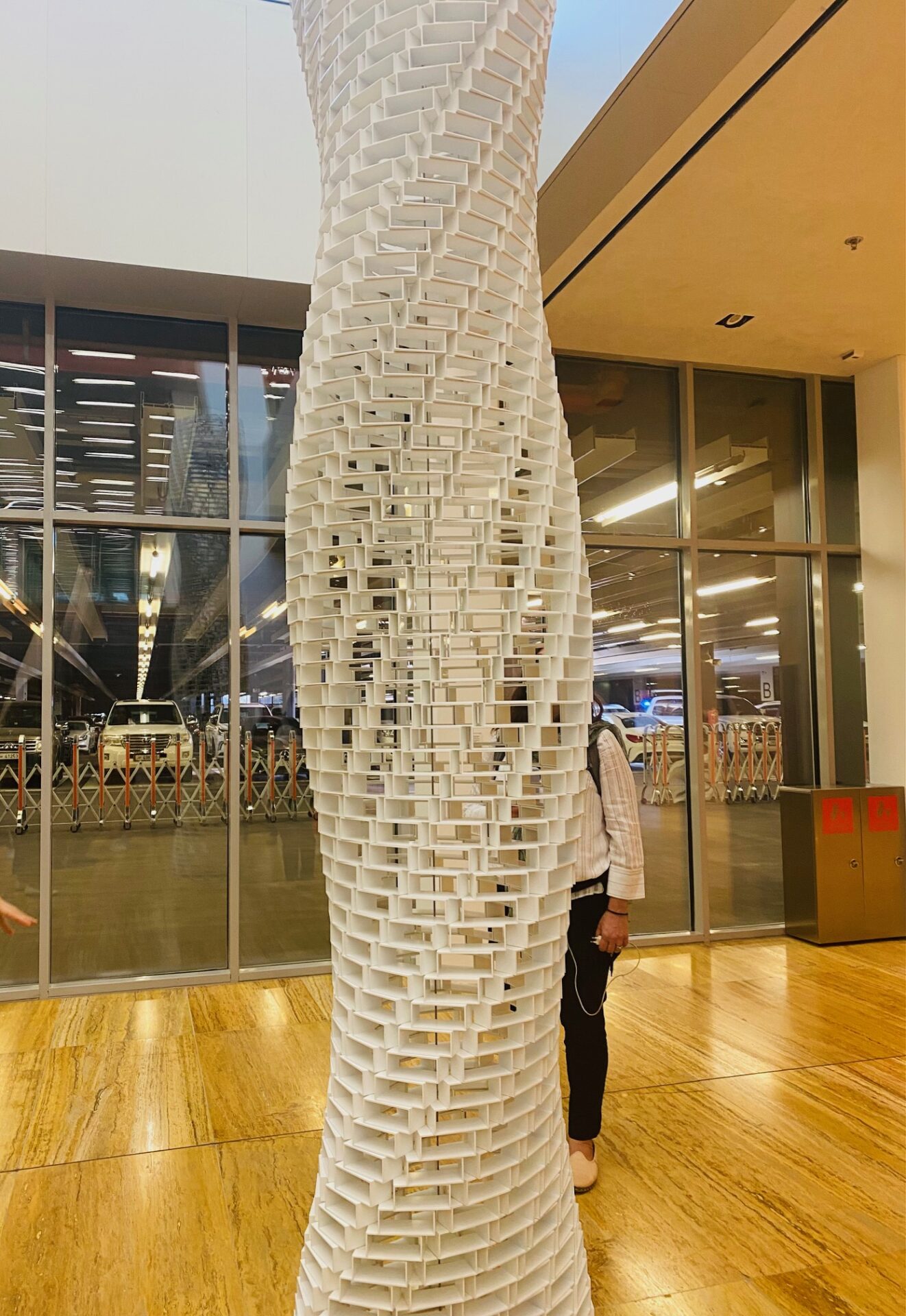 “The tower is not divided from the space around it, but it is an extension of it. The inside and outside are not separate, but continuously linked. The poetry of the work is in its ambiguity, and the perforated surface of the work removes the idea of fixed form, and it plays with light and space. At times, the light appears as shadow, and at other times, the shadow appears as light. And its form is constantly in a state of flux. So that the eye cannot fix its gaze on its surface,” explains Houshiary about her work that tries to disintegrate boundaries of materiality and volumes. 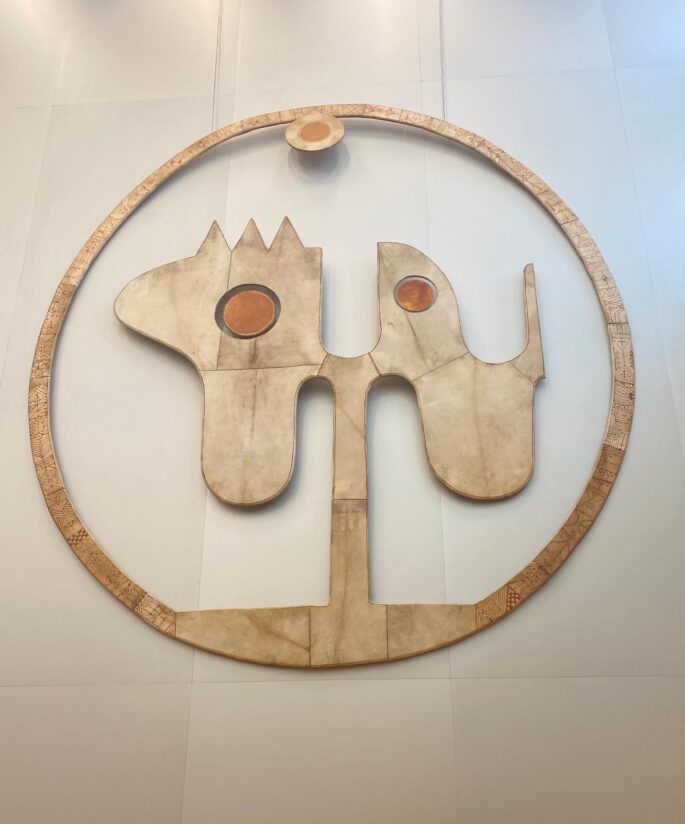 Belkahia is said to have influenced and fashioned a form of painting that was independent of any colonial heritage, thus fixing a set of contemporary values that would influence future generations of Moroccan artists, while confirming his stature as an international art figure. He has played an essential role in establishing modernism within a local context as the work on the QF walls can authorise.

The Art of Curating

Bacha who has been involved in curating art around Qatar Foundation for the last eight years has a keen sense of identifying art and artists to grace the walls of the Education City campus.

The process of curation has never been simple since all these factors have to be taken into consideration and passed through the architect if the building has just been completed, like the process followed for the art curation within Qatar National Library (QNL).

“While working for the QNL, which is part of Education City, we worked with Rem Koolhaas to commission the artwork. We had a management direction to have an artwork that represents reading, that had to be from a verse of Quran. As we all know, Koolhaas was an architect who was “super futuristic” in his design process and so I had to find an artist that could do a calligraphy that was readable as well as contemporary in its design,” says Bacha explaining the process of art curation within QNL. 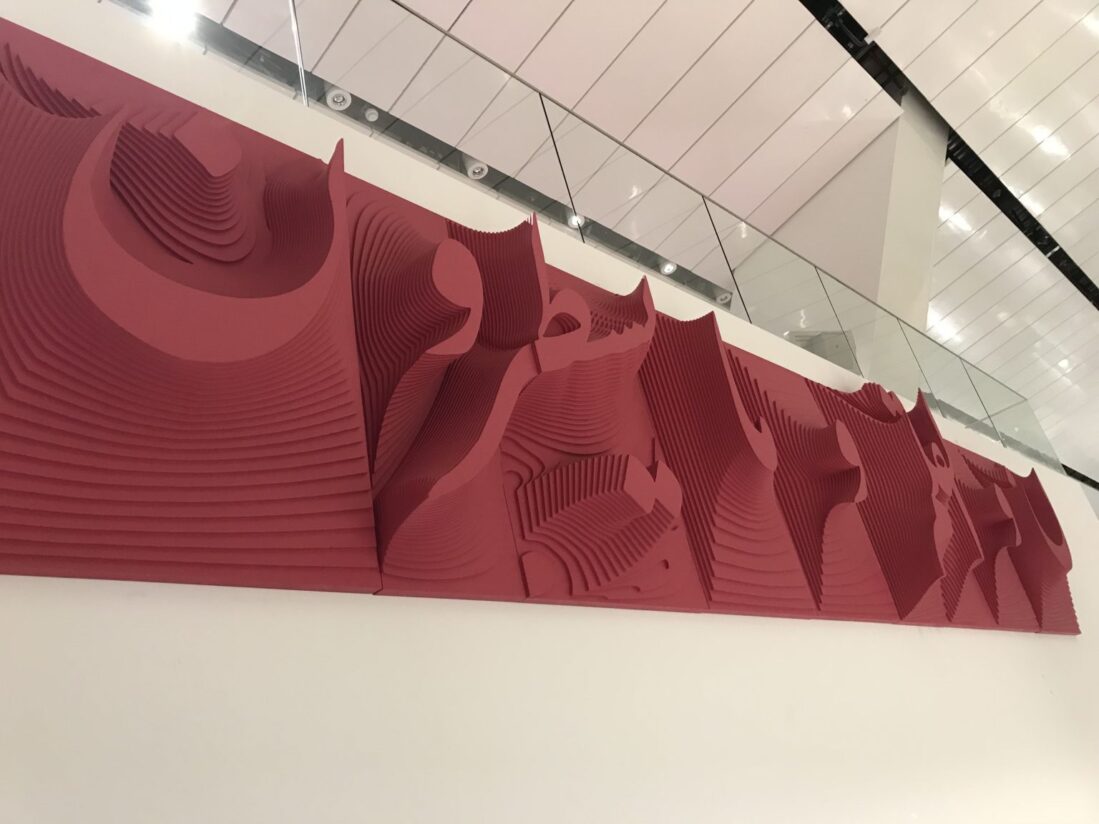 “After various consultations and discussions, we arrived at Iranian artist and architect, Ramin Shirdel, who uses a layering technique to create a sculptural depiction of the words he uses in his artform. The conversation between Koolhaas and Shirdel was so interesting, especially since the great architect is known to be very particular about what he wants within his structure. Shirdel was flexible and hence we could achieve the exact colour and the exact location for the artwork,” remembers Layla.

“For us at QF, art is a tool for social and human development. It is a vehicle that not just sparks creativity, but also promotes culture and heritage, while also advocating for innovation, dialogue, and exchange – elements recognised as important for the development of society and humankind.” 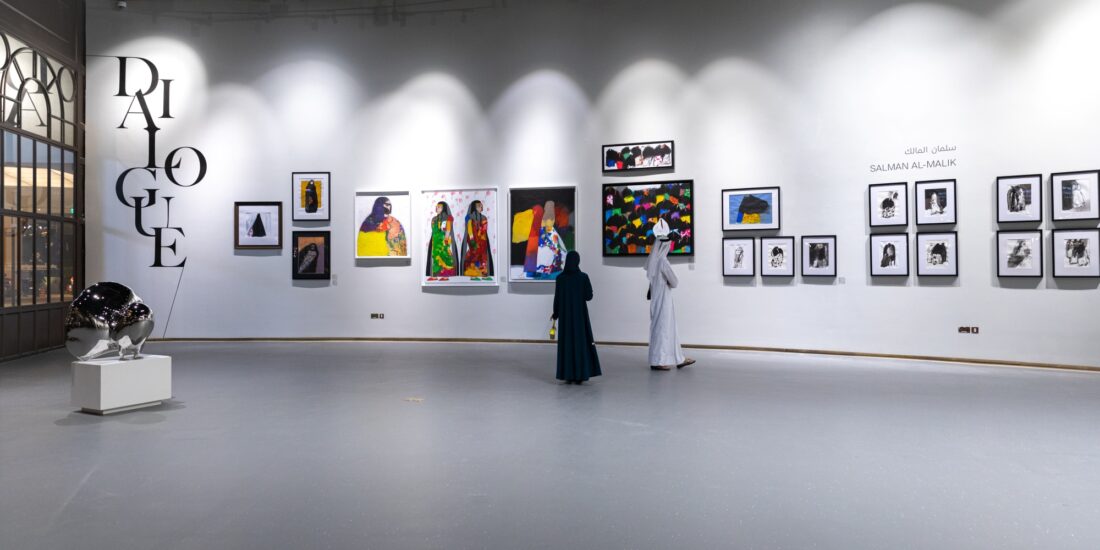 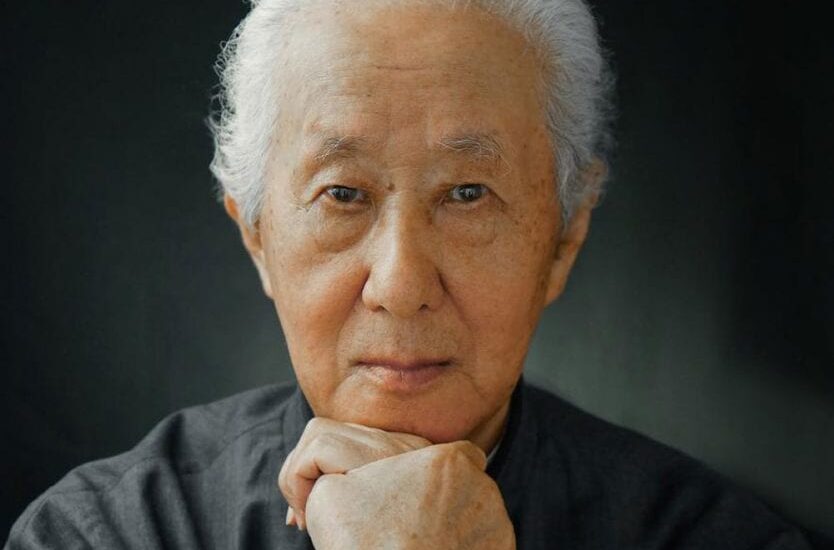 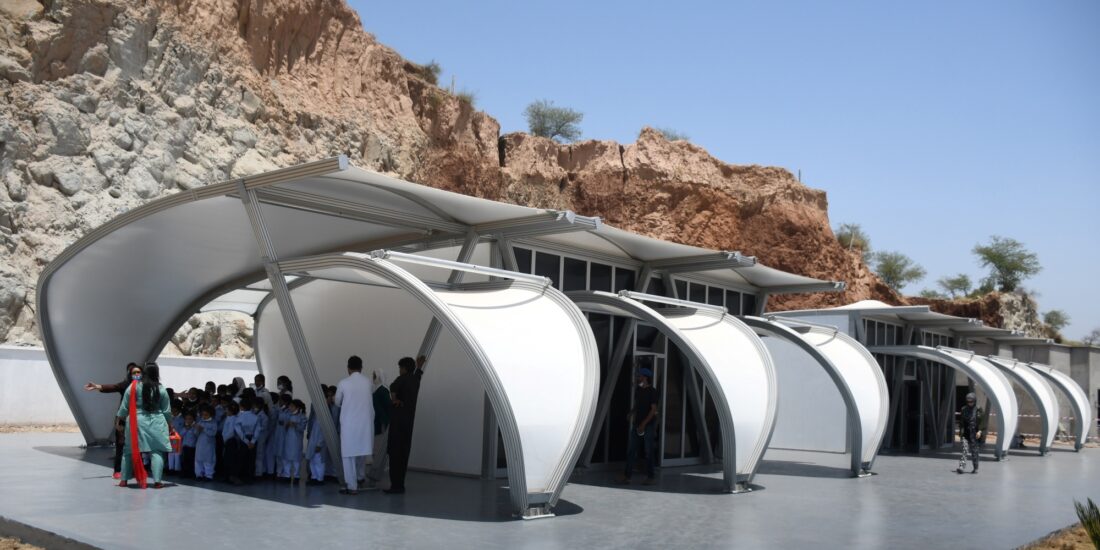 Education Above All (EAA) Foundation, the Supreme Committee for Delivery & Legacy, and its human and social