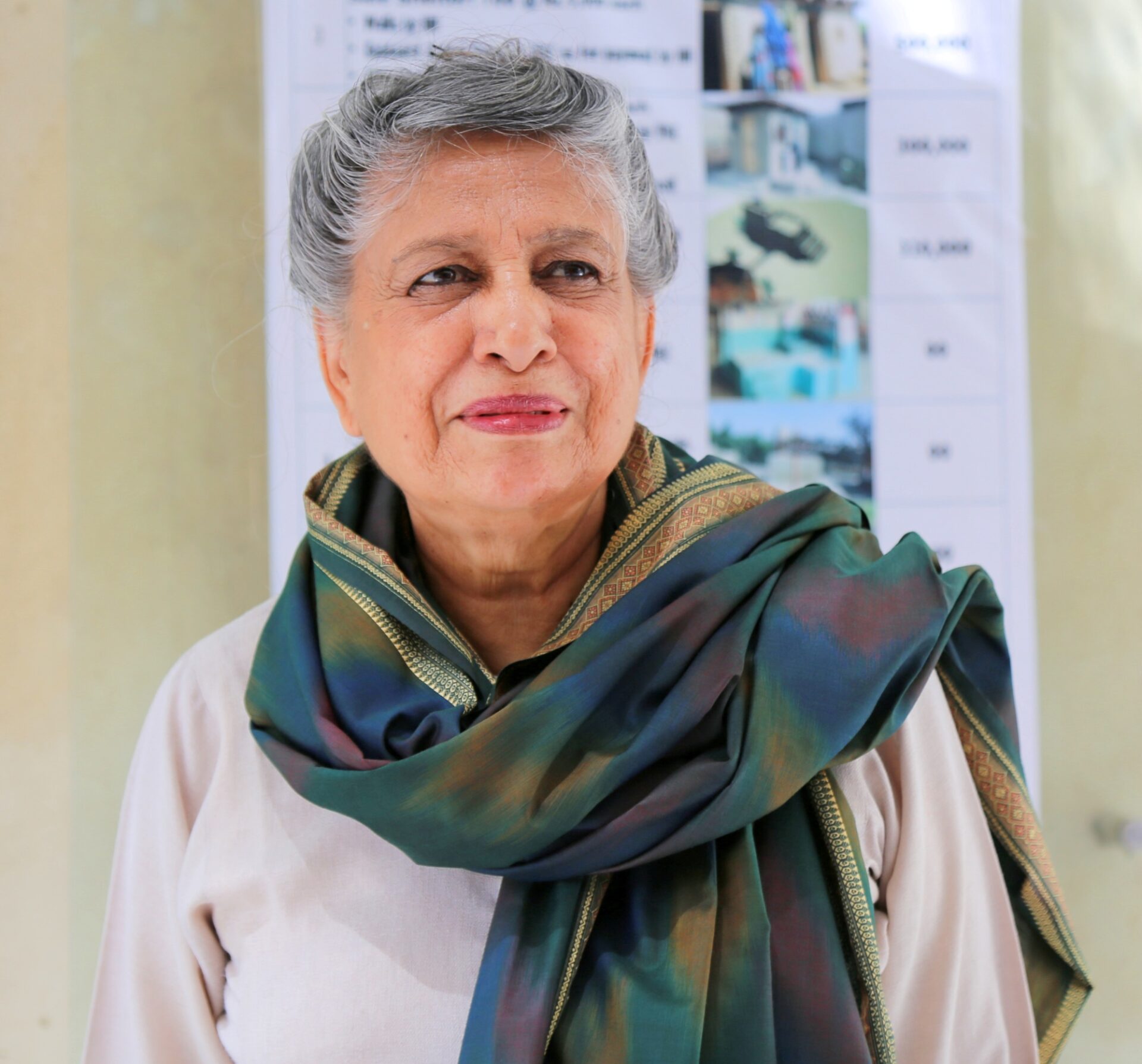 An Architect to the Rescue in Flood-Ravaged Pakistan

With a population of over 230 million and with the World Bank estimate of poverty ratio at 39.3 percent in 2020-21, over 80 million people live below the poverty line in Pakistan. It is in this scenario that the country has been hit with a devastating flood which has rendered 1000 dead and 30 million badly affected. Giving hope to the homeless, the country’s first woman architect, Yasmeen Lari is helping find solutions to shelter the homeless as well as containing rainwater through a simple trench mechanism that can be replicated easily.

The Pakistan government has declared the devastating floods a “national emergency” as monsoon rains continue to lash the country. According to the National Disaster Management Authority (NDMA) large swaths of the southwestern province of Balochistan remaining submerged and there is a huge need for temporary dwellings for those who have lost their houses.

It is at this critical juncture that Heritage Foundation Pakistan, led by Yasmeen Lari, Pakistan’s first woman architect and among the best-known architects of the country, has come up with designs to shelter the homeless in Pakistan as well as creating trenches for rainwater collection and diversion in flooded areas. 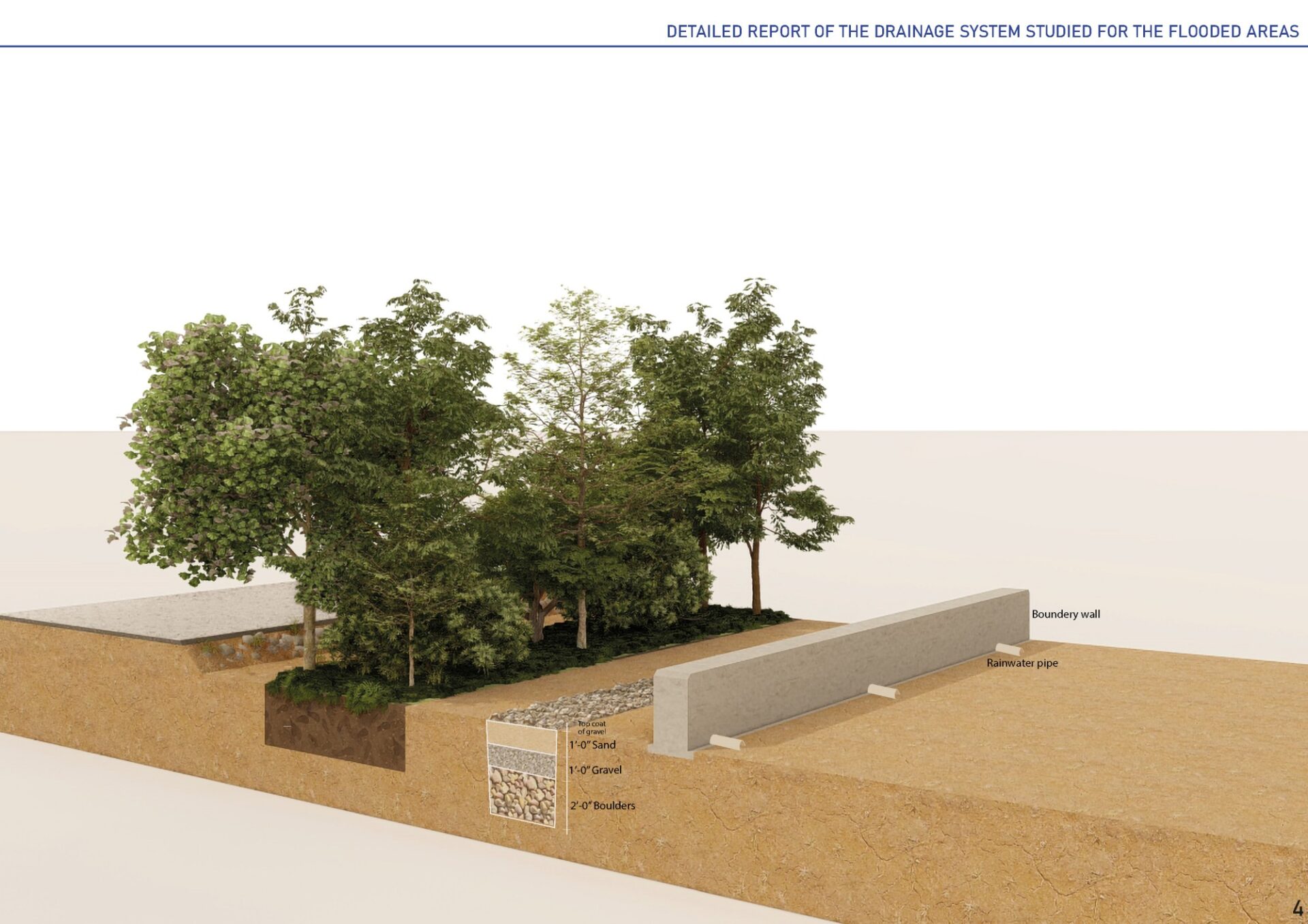 “In the past few days, following the disasters Heritage Foundation Pakistan reached out to some of the worst hit villages in Makli and Mirpurkhas (Pono Village), elaborating effective and economical approaches through vernacular methodologies. Calamities like this one prove us once again that climate change is not science fiction but destroys real people’s lives in the snap of a finger,” says Lari, Heritage Foundation CEO who has brought together a compact team of collaborators willing to give their contribution.

Pono Village is located in the district of Mirpurkhas (Sindh) has witnessed incredible damage from the heavy rains. A solution to drain the water out of the village has been studied and examined by the Heritage Foundation Pakistan.

“Rainwater drainage process coordinated by a team of experts has started to get executed with the support of the villagers. A low-cost approach has been studied and analysed starting from the aquifer trench, which will serve to collect the stagnant rainwater that is 8/9 inches deep and spread over at various locations in the distressed area. All actions will include maximum participation of affected households themselves, strengthening their capabilities and skills. Targeted training modules are in fact offered for implementing partners, volunteers, artisans and communities. The strategy also includes the transfer of prefabricated bamboo shelters that will be directly sent to the villages and composed on-site by the community.” 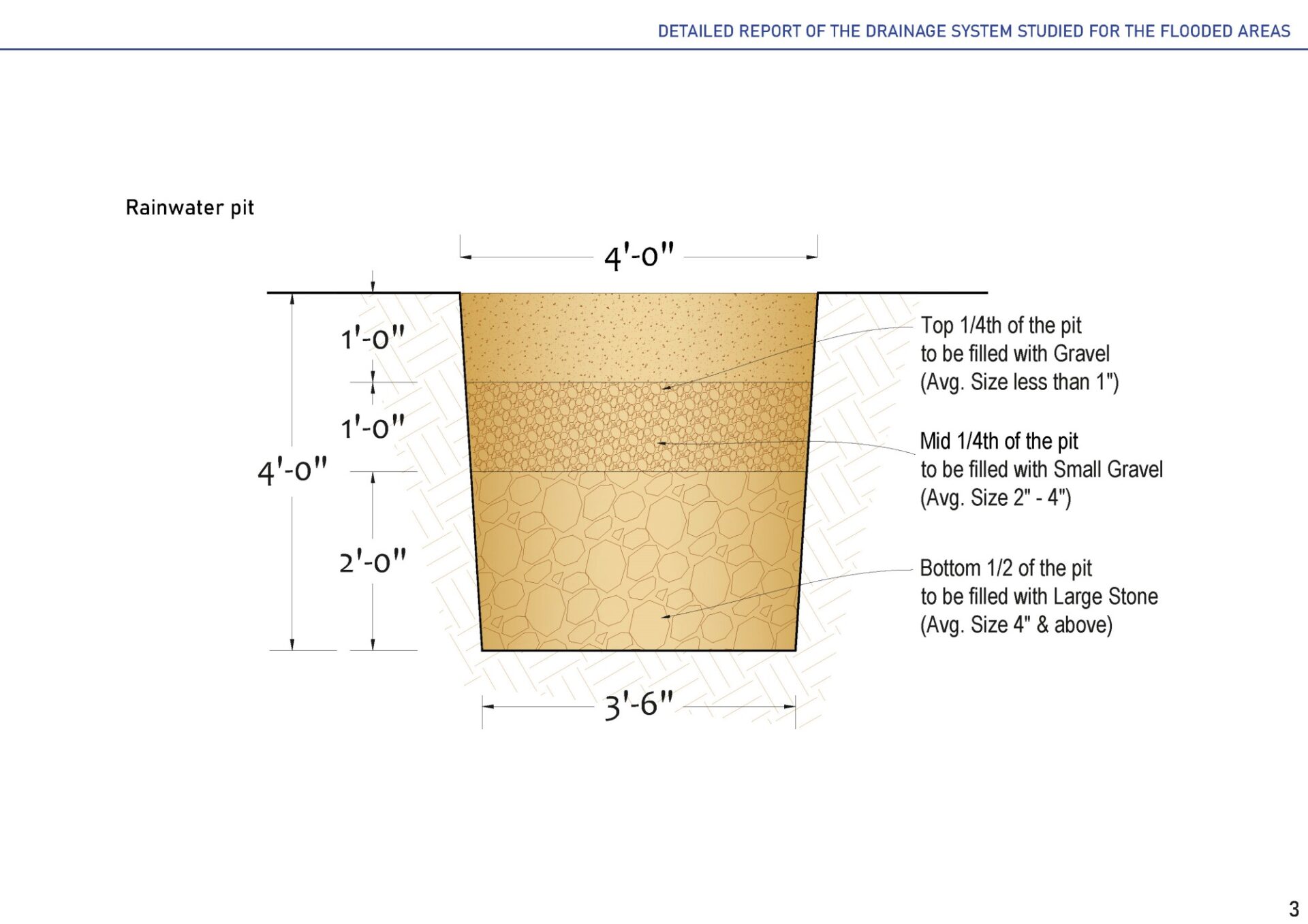 The solution is to create an aquifer trench (4’-0’’x4’-0’’) that will act as a natural drain for the rainwater.

With maps and easily comprehensible drawings, Lari and her team are setting up an easy-to-follow methodology involving the locals, giving them the power of rebuilding their own homes, empowering them in the process.

“As drawn on the map, in red is shown the path that must be followed in order to dig the aquifer trench. The latter will follow the left side of the main road surrounding the right side of the village. The Project will be later on be developed into a more structured one, that will include the creation of a forest along the main road and a boundary wall positioned right next the aquifer trench,” says Lari, who has built several landmarks buildings in Pakistan like the FTC, PSO House and ABN Amro Bank, Karachi and is considered among pioneers of Brutalistic Architecture. 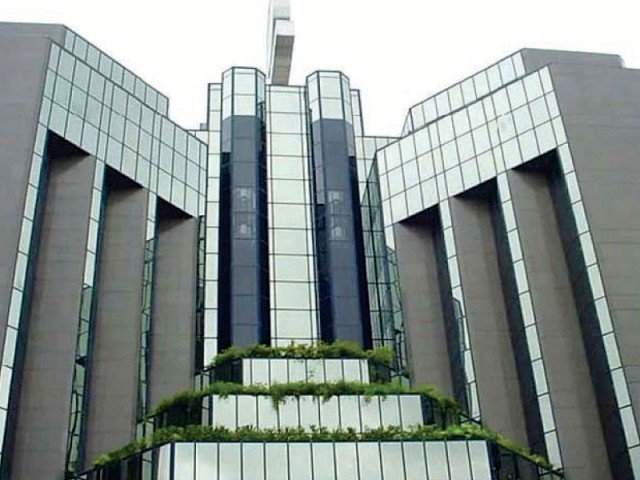 Lari retired from architectural practice in 2000 and has been a UNESCO consultant until she co-founded Heritage Foundation of Pakistan in 1980 with her husband, noted historian Suhail Zaheer Lari, for undertaking research and safeguarding Pakistan’s cultural heritage. Her most known works other than restoring historic buildings is the ‘Revitalization of Ancient Glazed Tiles in Sindh’ project taken up which helped to complete the 16th c. tomb of Sultan Ibrahim along with imparting the ceramic making skills to poor communities, especially women, for income generation. 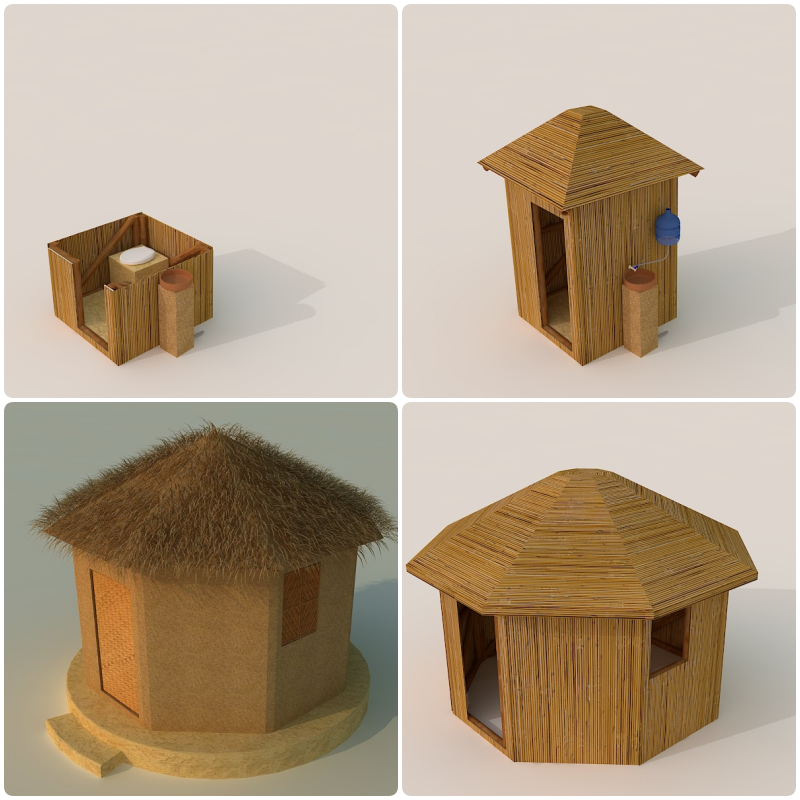 Her most engaging quality is how she involves the community and empowers them, the women more so, to give them an additional source of income. This technique is utilised now during the floods too to get the people to build their own shelters to be aware of their needs and to prepare accordingly. “It’s important,” she says, that the families that use the shelters are involved in building them. “It’s a participatory process,” she says. “I think the Western model of charity is terrible.”

Though she does acknowledge in an interview with The Fast Company that the scale of the current disaster necessitates more aid. 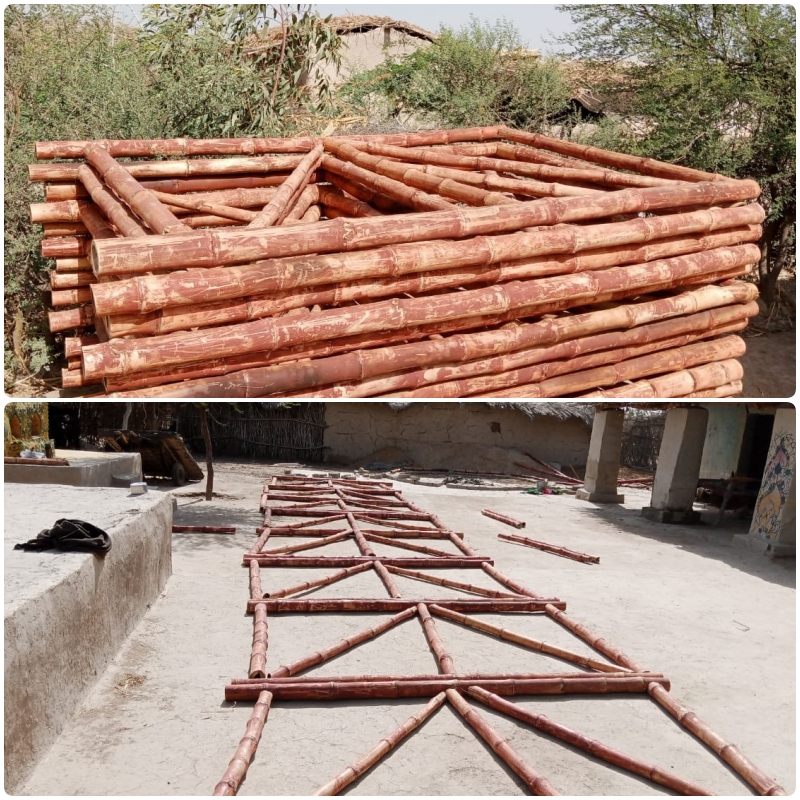 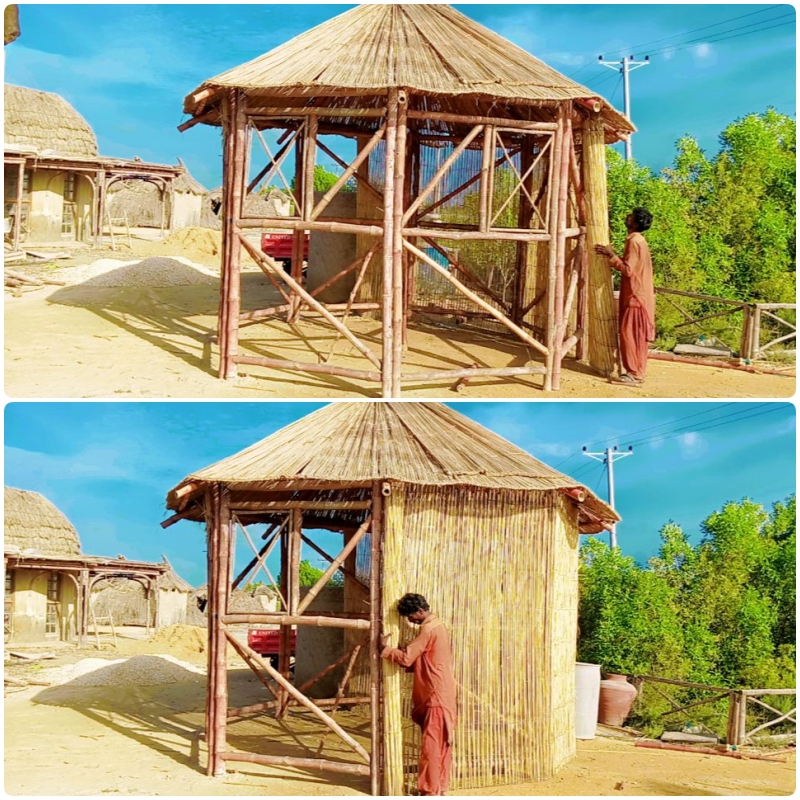 Lari and her team of architects and engineers started experimenting with new materials in disaster relief after the great flood of 2010 that submerged a fifth of Pakistan, left 2,000 people dead and hundreds of thousands of people homeless. Their shelters in Sindh Province, says Lari, have since withstood year after year of flooding. Lari has built over 40,000 low-cost shelters using just mud, lime and bamboo.

The shelters are simple to build, low cost, and can be disassembled and moved, and the same basic materials can be used to make more permanent structures. 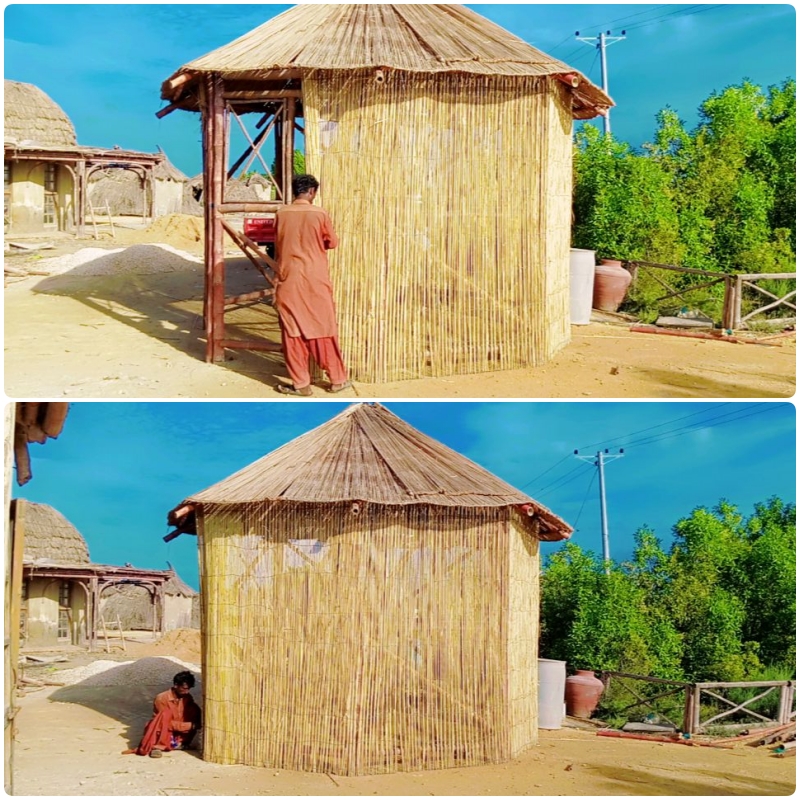 The one-room, 10×10-foot structures, have enough room for five people to sleep. The walls are made from eight bamboo panels—Lari calls the design the “OctaGreen”. A pole in the middle holds up a bamboo-framed roof. Everything is covered with handwoven reed mats. YouTube videos share the simple instructions for construction.

“Right now, they can be installed temporarily on high ground; they can later be disassembled and rebuilt on permanent foundations elsewhere,” she says.

INTBAU Pakistan, an architectural nonprofit, is raising money to buy bamboo and other basic supplies for the artisans currently working on new shelters. The organization may also help some families take out loans for the building supplies, which cost a little more than $100 per home. 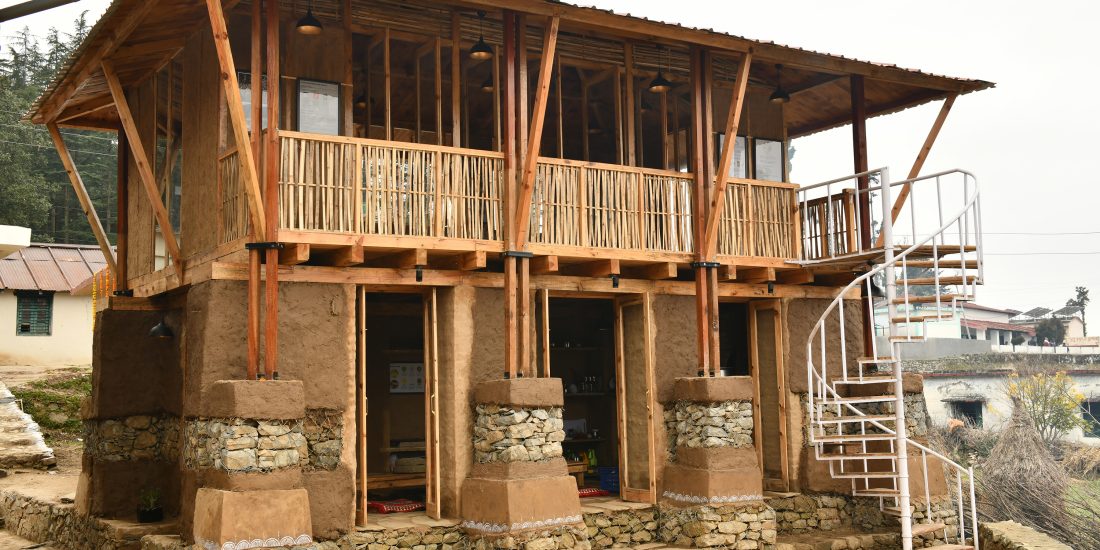 Building for the Community