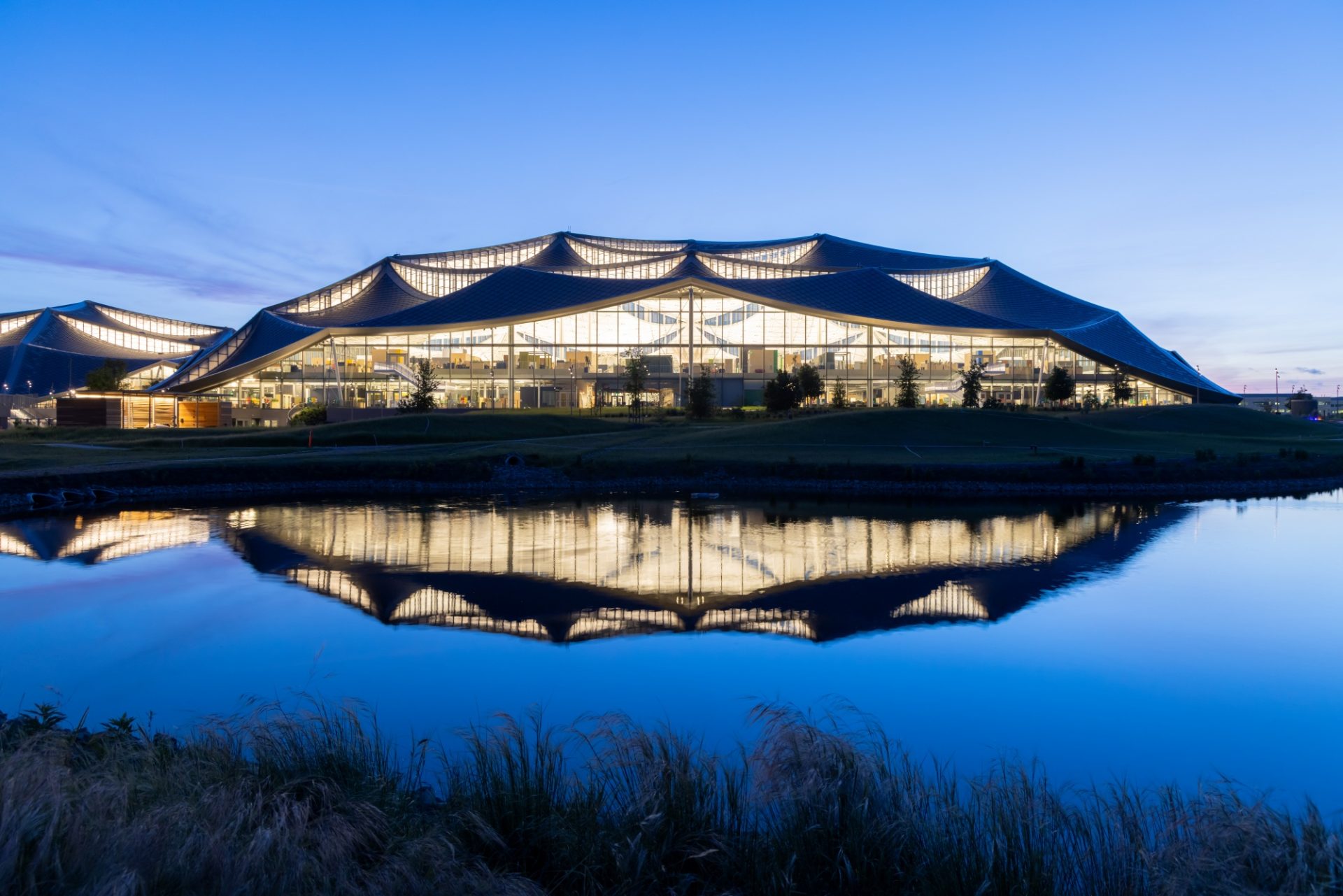 Google announced the opening of its new Bay View campus in Silicon Valley, representing the company’s first own major campus, designed by architects Bjarke Ingels Group (BIG) and Heatherwick Studio on May 17, 2022. 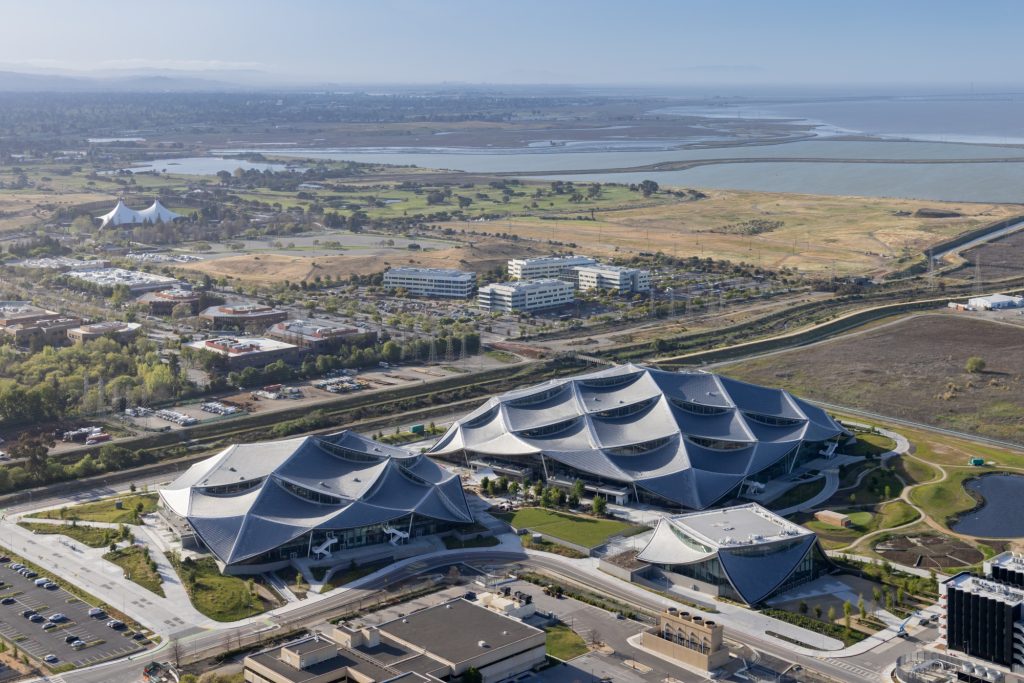 An aeriel view of the Bay View in the foreground with parts of Google’s Mountain View Campus in view as well as the San Francisco Bay. Image Credit: Iwan Ban

This building will house 4,000 Google employees and includes two office buildings, an event centre, and temporary hotel units for employees. It will help bolster the region’s position as a thriving hub for top talent and innovation. The same design team is working on the internet giant’s £1 billion base in London’s King’s Cross, which is under construction and expected to finish in late 2023. 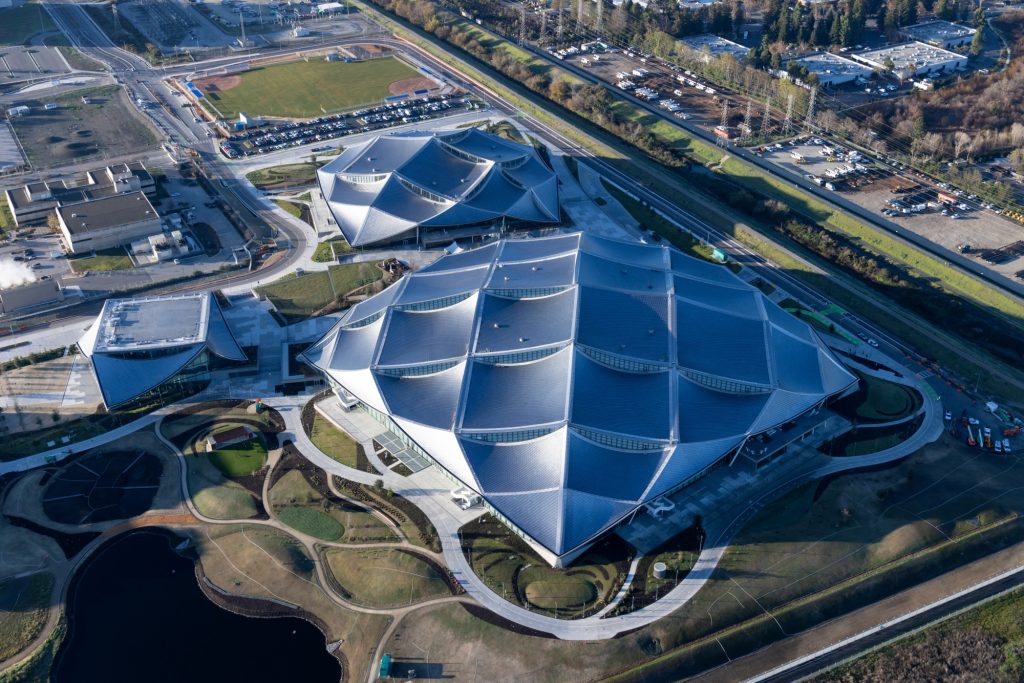 Described as Google’s ‘first-ever purpose-built headquarters’, the 102,000m² scheme is one of a pair of sister developments in California. The other, dubbed Charleston East and also drawn up by Thomas Heatherwick’s practice and BIG, is due to complete next year.

The three Bay View buildings – a pair of offices and a 1,000- seat auditorium – feature lightweight, tent-like roofs with ‘dragon-scale’ photovoltaic tiles, which will generate 40 per cent of the scheme’s energy needs.

“This is the first time we designed and developed one of our major campuses, which allowed us to rethink the very idea of an office and what’s possible for the building industry. The result is a set of buildings that show what’s possible in human-centered and sustainable workplace design,” says Thomas Heatherwick. 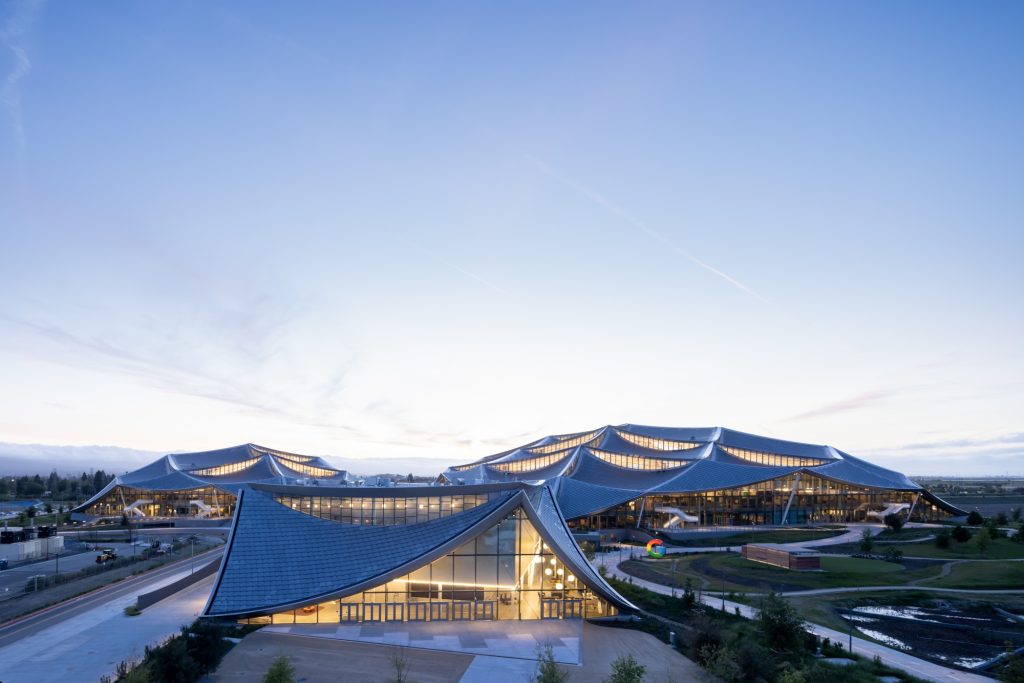 Google’s campus with the events centre bwhind and the bran;d’s logo as a sculpture. Image Courtesy Iwan Baan.

The interior of the buildings reemphasise Google’s vision for the future of work, designed in response to its understanding of why Google’s employees come to the office, what they need from their teammates, and what they need from the company. For those coming into the office, it was designed to balance Googlers’ desire to come together =as teams with the need for an environment that enables deep-focus work. Team spaces are on

the upper level and gathering spaces are below, separating focus and collaborative areas while still providing easy access to both. The second-floor design has variation in floorplates to give teams a designated “neighbourhood” area that is highly flexible to change with their needs.

Canopies with wave-like clerestories on the two office ‘tents’ shelter a ‘village’ of workspaces, meeting areas, cafés, and a gym and sports centre.

This, says Heatherwick Studio, allows ‘everyone [to] work together, under the same sky, instead of in cramped floors stacked above a spacious office lobby for guests’. 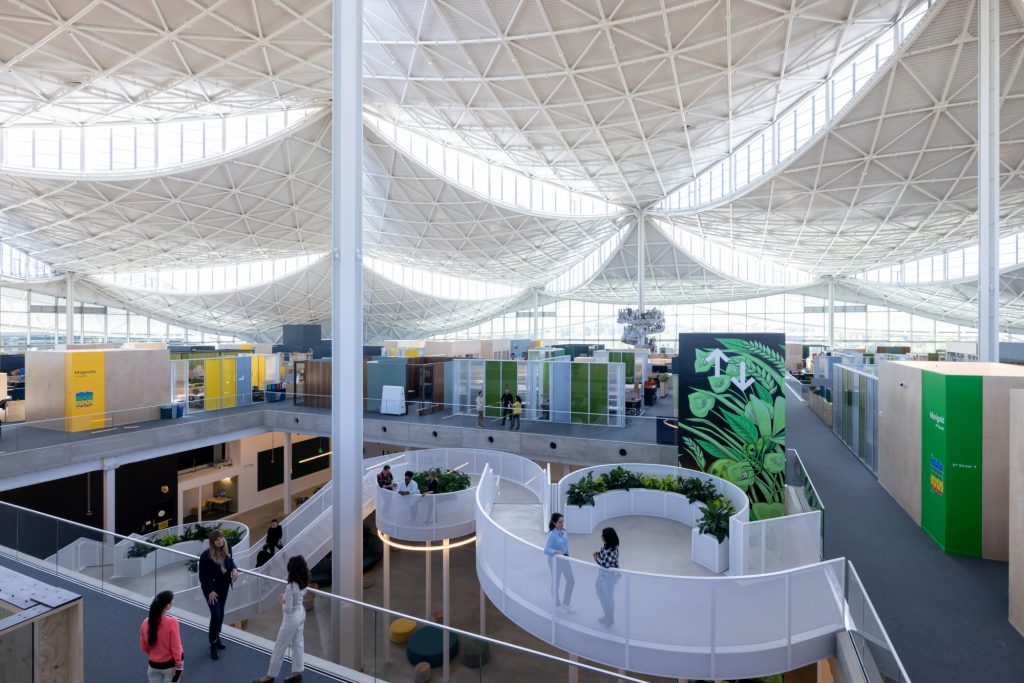 Google’s work groups are split into neighbourhoods of 40 to 80 people and arranged around their own respective courtyards, incorporating works of art. Heating and cooling for the project is supplied by the largest geothermal pile system in North America, incorporating below-ground pipes with a combined length of almost 100 miles, covering an area equal to 12 American football fields. 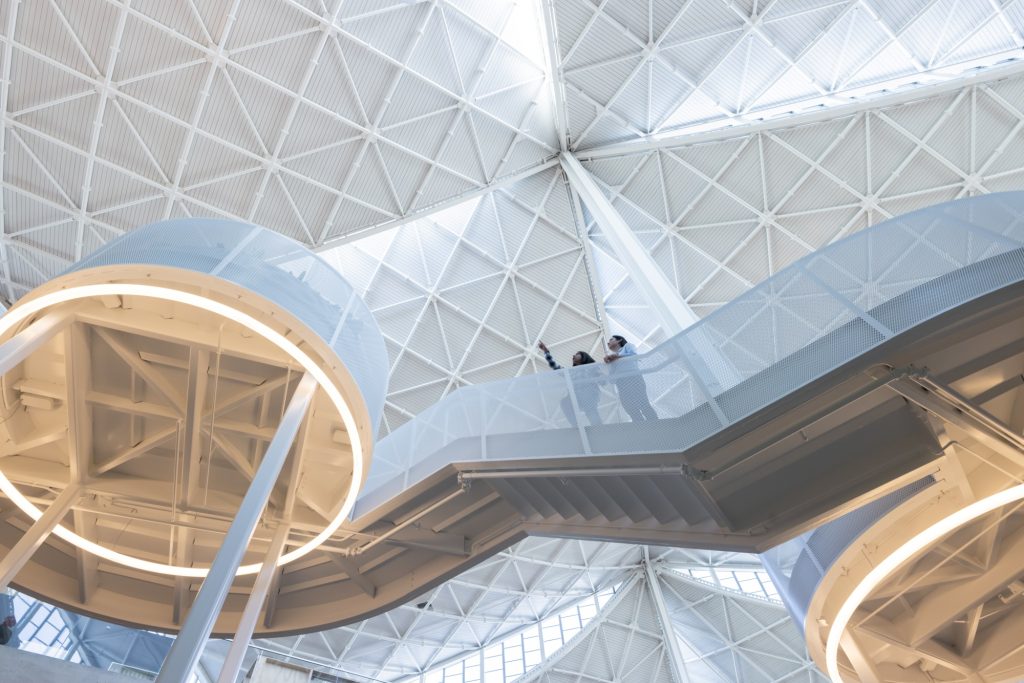 The campus incorporates biophilic design principles, including greenery, natural daylight and views outside from every desk to improve the health and wellbeing of those inside the building. Clerestory windows modulate direct light onto desks with automated window shades that open and close over the course of the day.

The ventilation system uses 100% outside air. This means air flows one way, so there is no recycled air, which is much healthier for occupants. 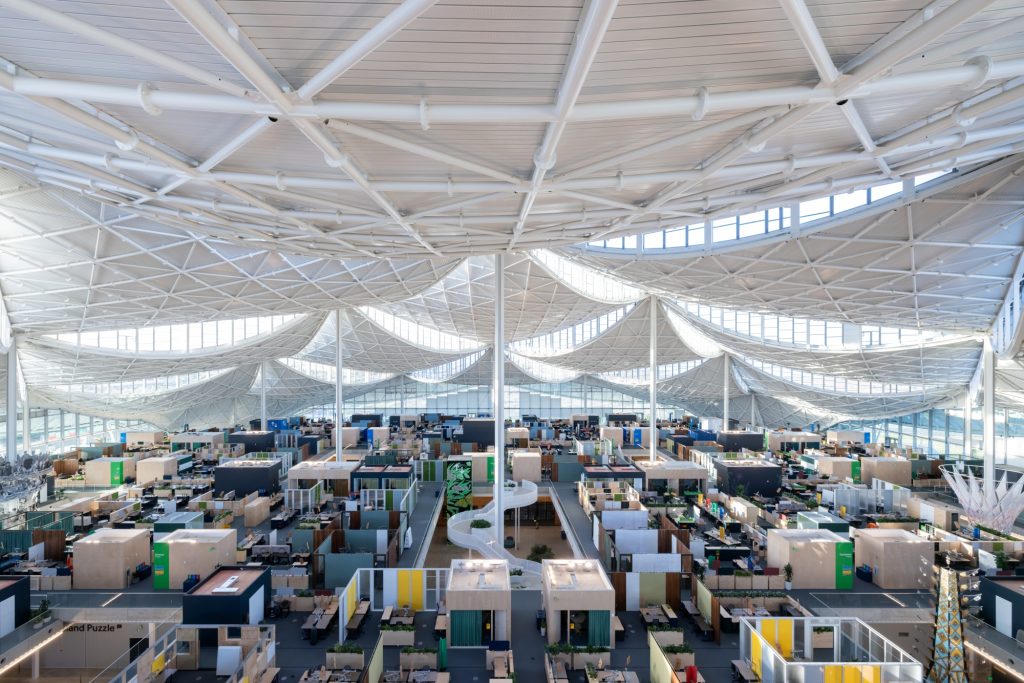 A view of the seconf floor that shows how thousands of Googlers can be in a connected space under a canopy. Image Credit: Iwan Baan

To remove toxins and create the healthiest environment possible, the project team vetted thousands of building products and materials — everything from carpet tiles, paints, piping, plywood and furniture were evaluated using the Living Building Challenge (LBC) Red List as a framework.

Nine pieces of artworks from local Bay Area artists are on and around the nine massive two-story elevators. Not only do they depict Bay Area ecology scenes, but they also help with wayfinding in the building.

Sustainability is also core to the Bay View campus. The site is expected to achieve a LEED-NC v4 Platinum certification and become the largest facility ever to attain the International Living Future Institute (ILFI) LBC Water Petal Certification.

The integrated geothermal pile system, which is the largest in North America, is estimated to reduce carbon emissions by roughly 50% and will help both heat and cool the campus. The massive geoexchange field is integrated into the structural system, reducing the amount of water typically used for cooling by 90%, equal to five million gallons of water annually. 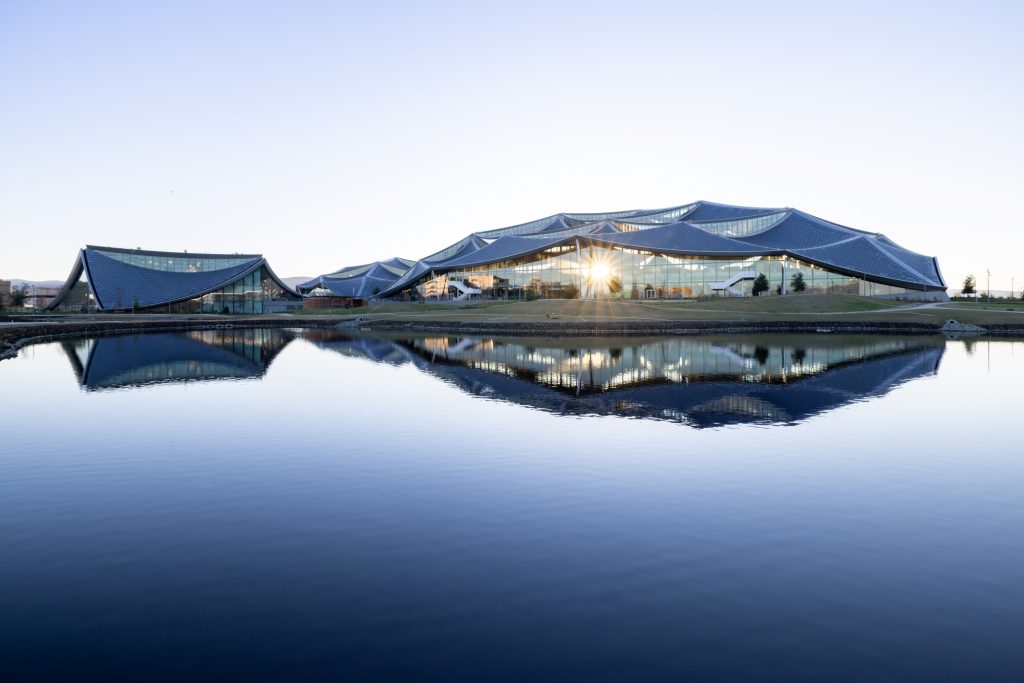 The stormwater retention pind that hekps in the water-positive nature of the building. Image credit: Iwan Baan.

To help deliver on its commitment to replenish 120% of the water it consumes by 2030, the site is net water-positive with all non-potable water demands being met using the recycled water it generates on site. A series of above-ground ponds gather rainwater, combined with a building wastewater treatment system, together serve as a water source for cooling towers, flushing toilets, and landscape irrigation.

The campus includes 7.3 acres of high-value natural areas – including wet meadows, woodlands, and marsh – that contribute to Google’s broader efforts to re-establish missing essential habitat in the Bay Area.

Local residents can also benefit from the opening of the Bay View campus, including public access to expanded trails with panoramic views of the Bay, improved bike connections to Stevens Creek and Bay trails, and expanded car lanes and new bike lanes with the widening of R.T. Jones Road. 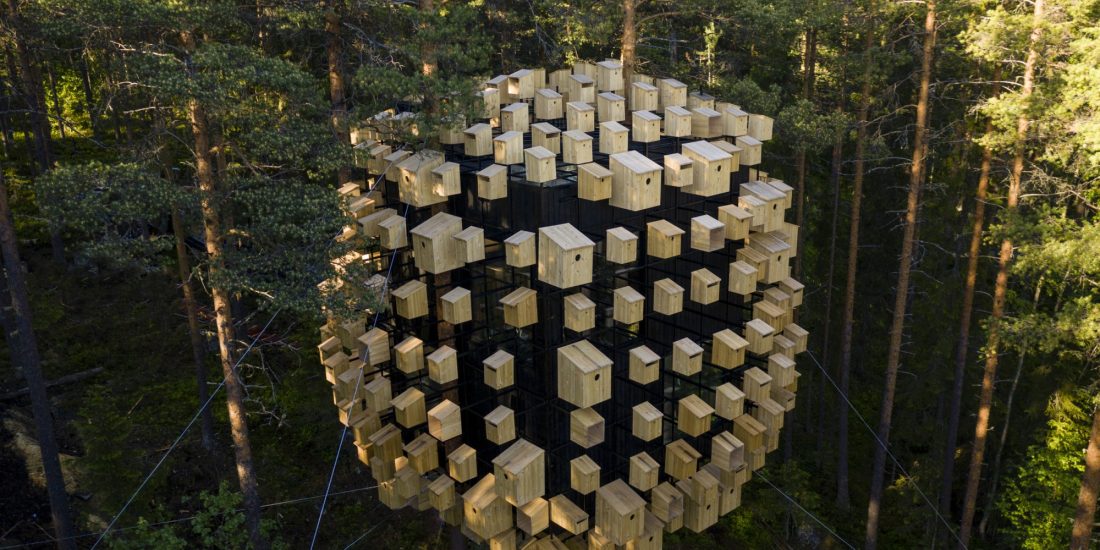 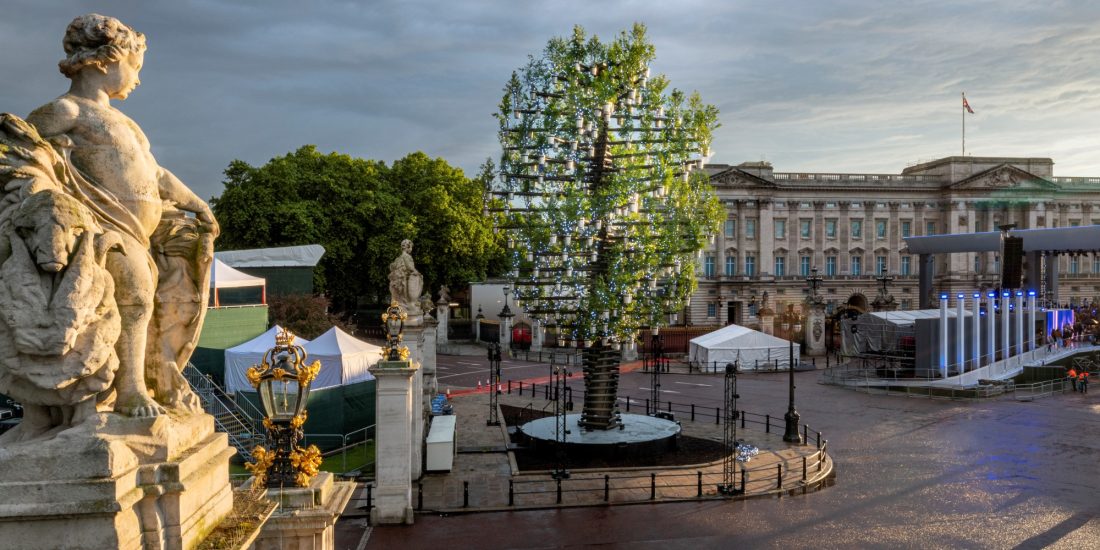 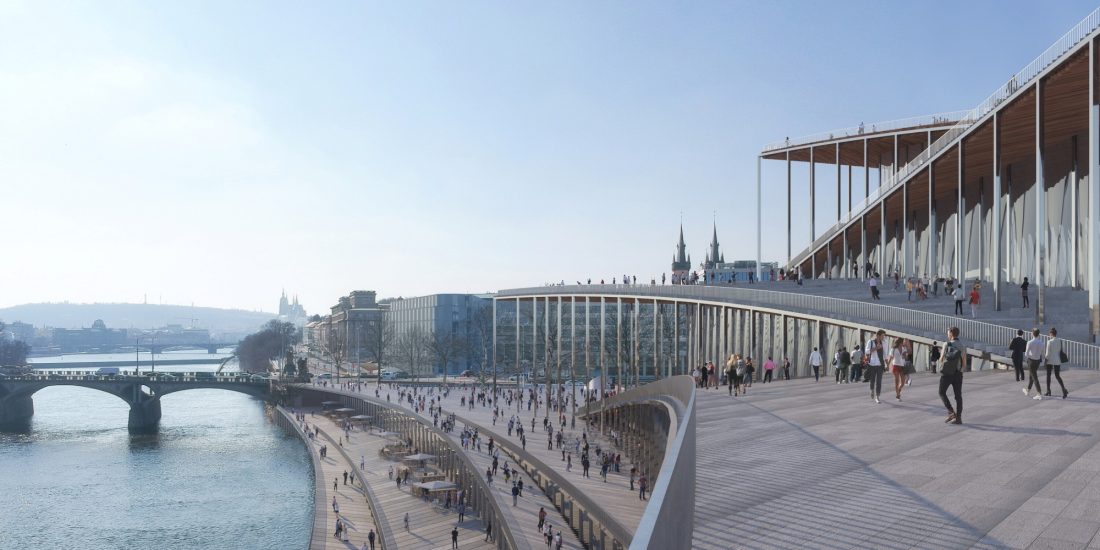