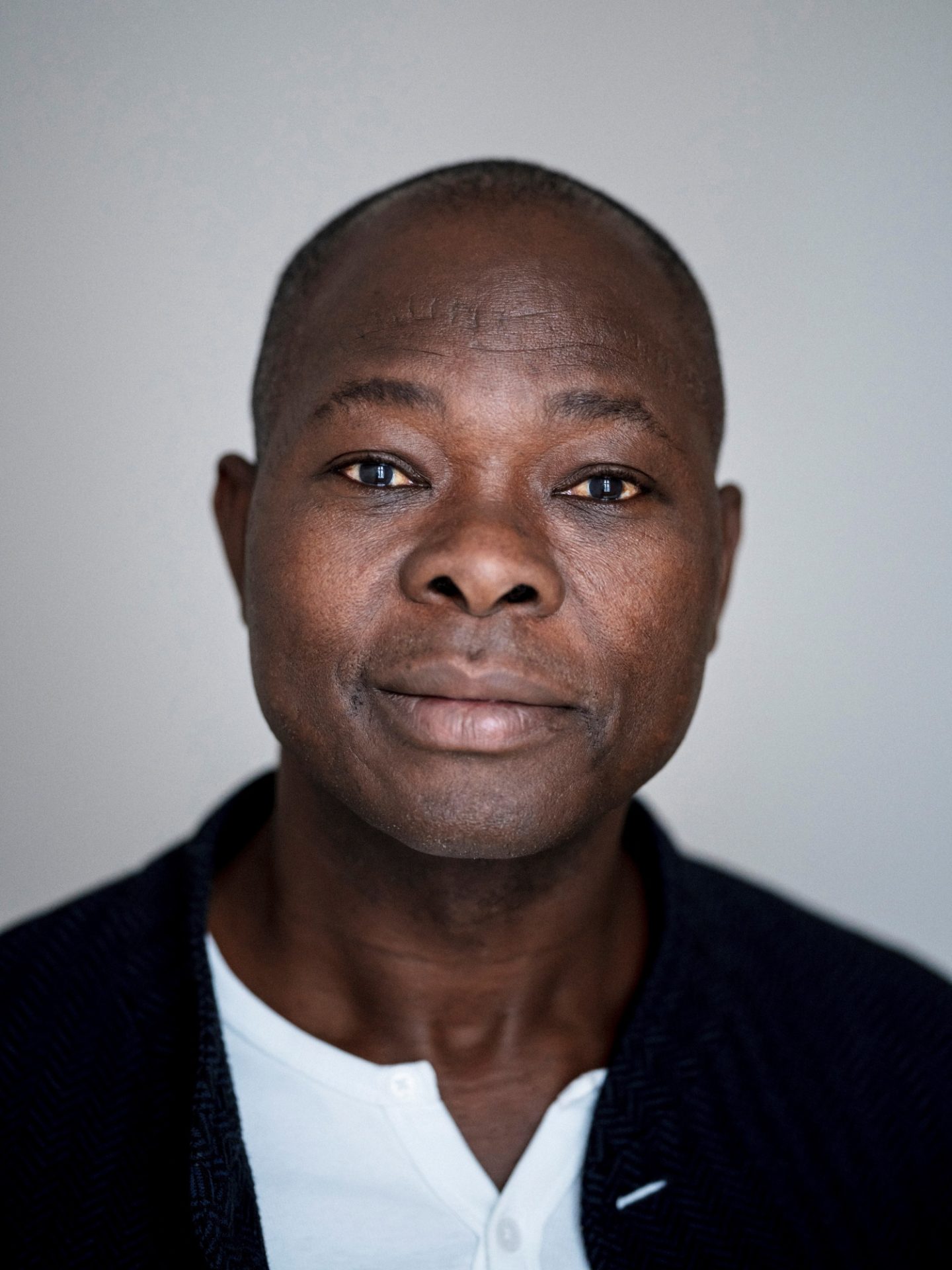 Diébédo Francis Kéré, architect, educator and social activist is the 2022 Laureate of the Pritzker Architecture Prize, announced Tom Pritzker, Chairman of The Hyatt Foundation, which sponsors the award that is regarded internationally as architecture’s highest honour. 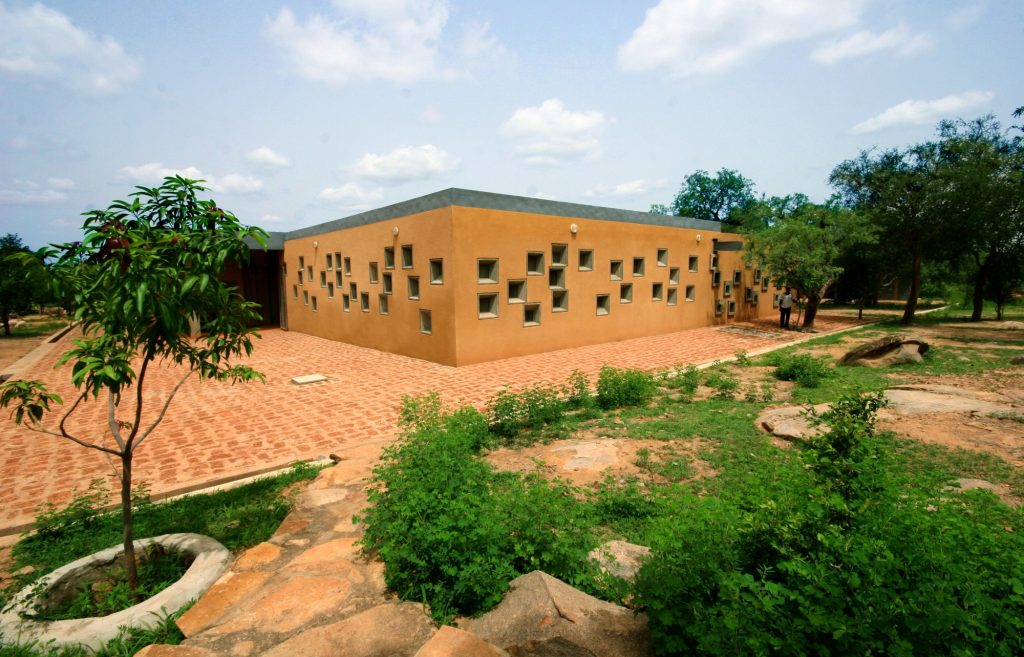 Born in Gando, Burkina Faso and based in Berlin, Germany, Francis Kéré empowers and transforms communities through the process of architecture. Through his commitment to social justice and engagement, and intelligent use of local materials to connect and respond to the natural climate, he works in marginalised countries laden with constraints and adversity, where architecture and infrastructure are absent. 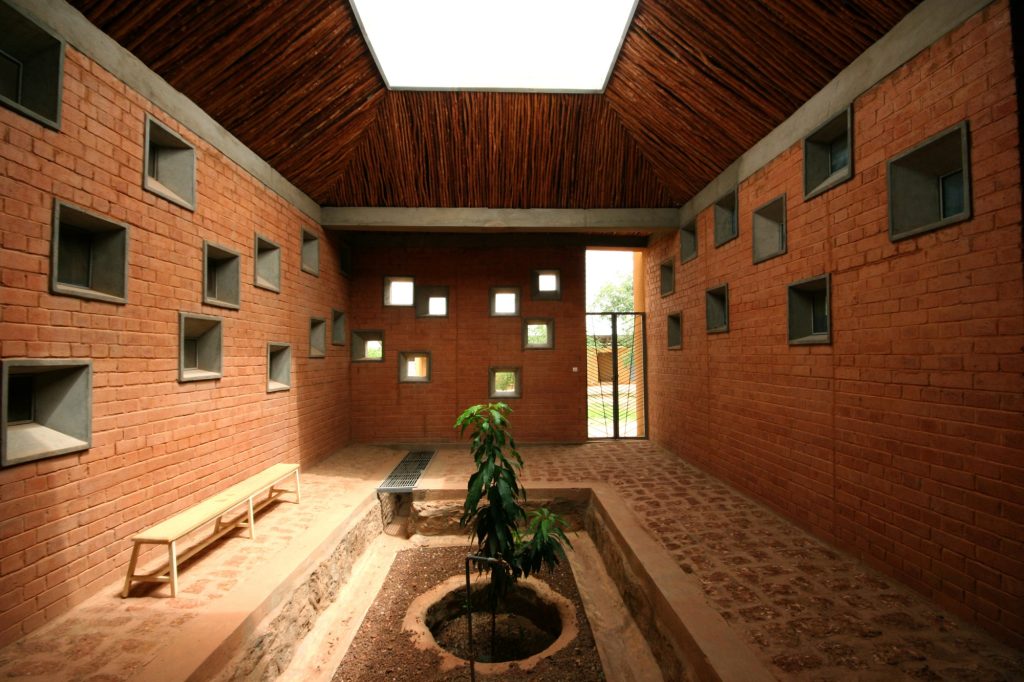 The Center for Health and Social Welfare is constructed of local clay and laterite stone, with eucalyptus wood and overhanging roofs, the structure’s materials present elements of aesthetic consistency throughout the complex. Photo courtesy of Francis Kéré.

Building contemporary school institutions, health facilities, professional housing, civic buildings and public spaces, oftentimes in lands where resources are fragile and fellowship is vital, the expression of his works exceeds the value of a building itself. 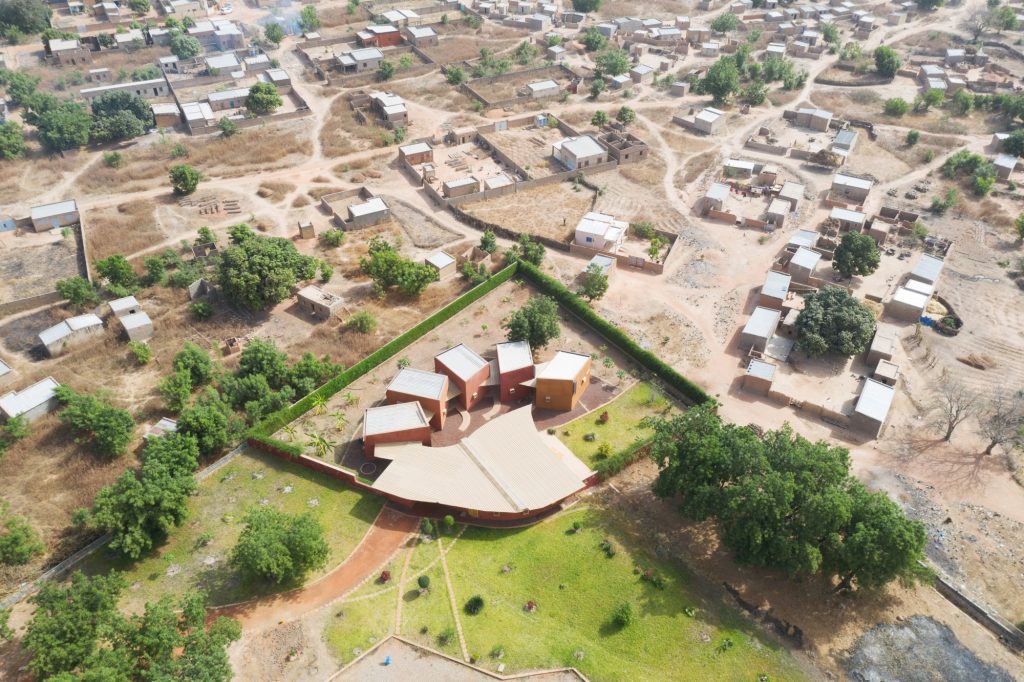 Located in one of the more populated cities of Burkina Faso, Koudougou, Lycée Schorge Secondary School serves as a local landmark for its aesthetic qualities. Nine modular buildings are arranged radially, establishing a center ring of flexible community space for performance, celebration and gathering. Photo courtesy of Francis Kéré

Enabling people through architecture Kéré believed in involving the local community in his building endeavours. He says, “I think we all affect each other, one way or another. whether you are the resident of the building or the neighbour, it is important to think about how to get people to be involved at the very beginning. I had the shape and the size, but they had to support the building. In Burkina, where we are economically not at the same level, not like in the West, getting the community to be part of a construction is very beneficial because you’re passing on knowledge, you’re reducing the costs of a potential building, because of local labour, but you’re also empowering people. if you enable the people, then they learn to appreciate the quality of the work you have achieved together, you rise the pride of the local community, and at the same time, the economy is a significant factor within that.” 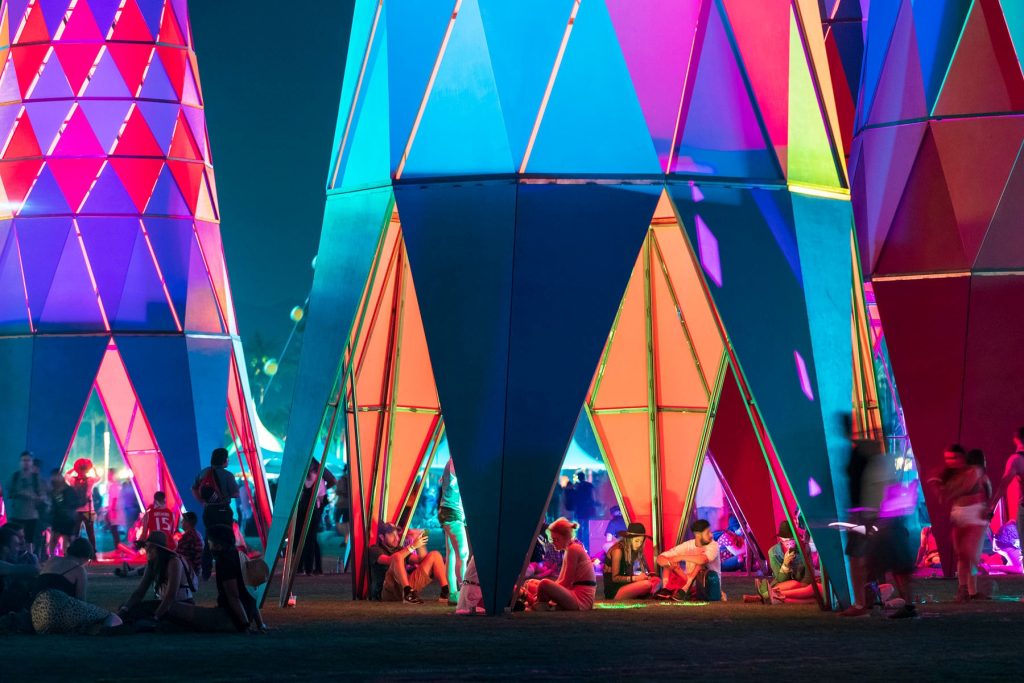 Sarbalé Ke, originally designed for Coachella Valley Music and Arts Festival, translates to “House of Celebration” in Kéré’s native Bissa language, and references the shape of the hollowing baobab tree, revered in his homeland for its medicinal properties. Constructed of steel and colourful wooden triangular panels, three large central baobab towers serve as a focal point and for larger assembly, while smaller towers allow for intimate gathering. The pink, orange and blue exteriors adopt the palette of the sunrises and sunsets cascading through the surrounding mountains, while filtered light creates interior shady respite by day and illumination by evening. Photo courtesy of Iwan Baan 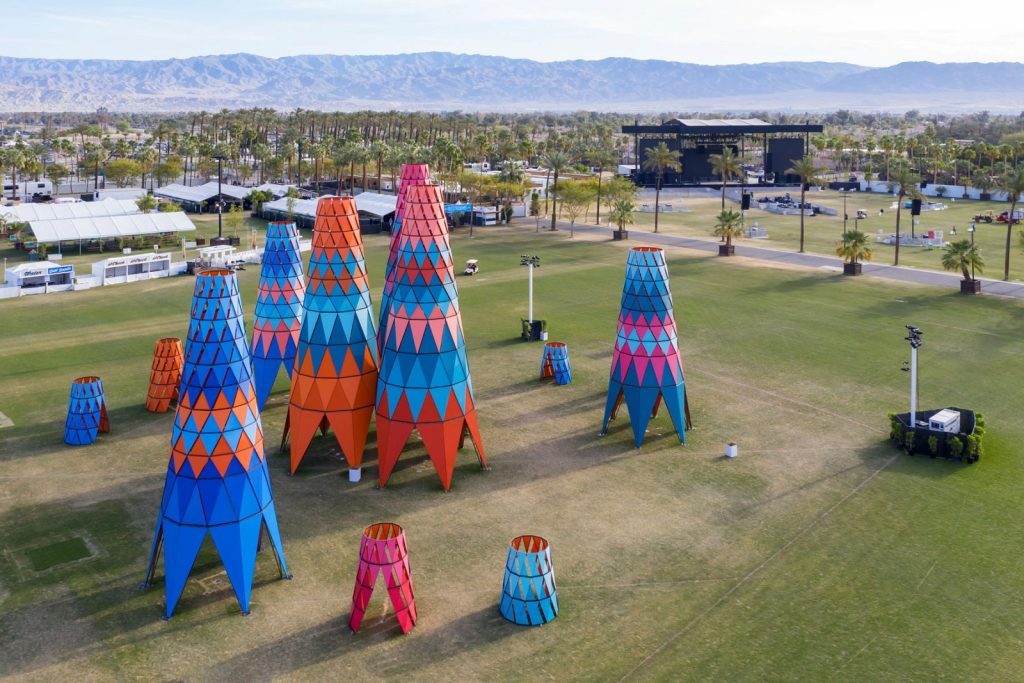 “Francis Kéré is pioneering architecture – sustainable to the earth and its inhabitants – in lands of extreme scarcity. He is equally architect and servant, improving upon the lives and experiences of countless citizens in a region of the world that is at times forgotten,” comments Pritzker. “Through buildings that demonstrate beauty, modesty, boldness and invention, and by the integrity of his architecture, Kéré gracefully upholds the mission of this Prize.”

Gando Primary School (2001, Gando, Burkina Faso) established the foundation for Kéré’s ideology – building a wellspring with and for a community to fulfil an essential need and redeem social inequities. His response required a dual solution – a physical and contemporary design for a facility that could combat extreme heat and poor lighting conditions with limited resources, and a social resoluteness to overcome incertitude from within the community. 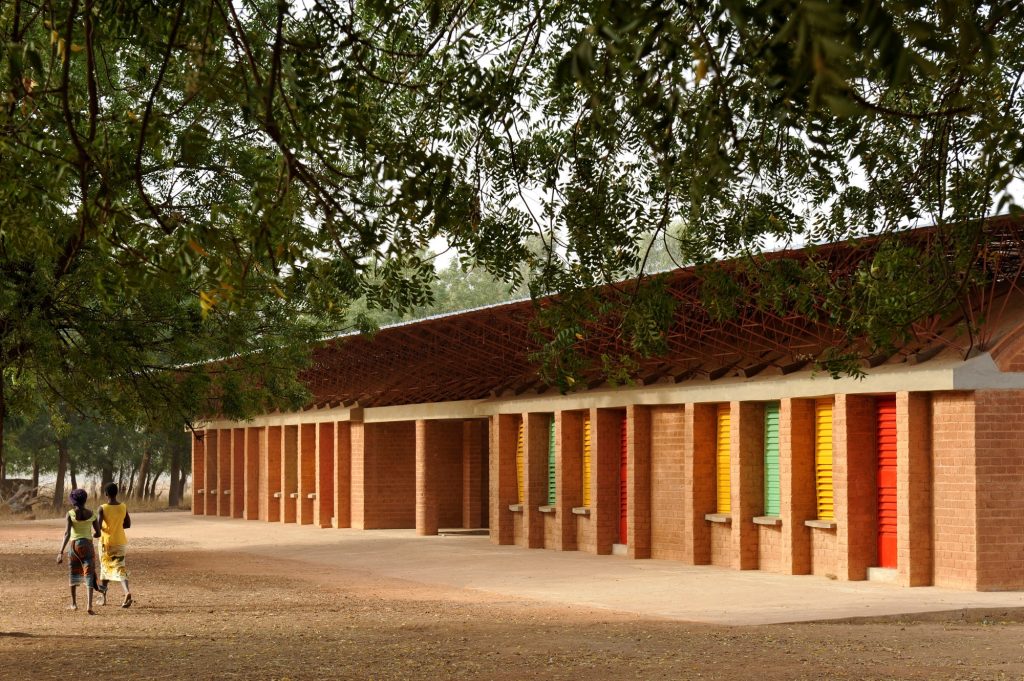 Gando Primary School was the first outcome and beneficiary of Kéré Foundation e.V. (est. 1998) and marks the architect’s inaugural built work. His ideology, to build a wellspring with and for a community to fulfills essential needs and redeem social inequities. Gando Primary School, photo courtesy of Erik-Jan Owerkerk 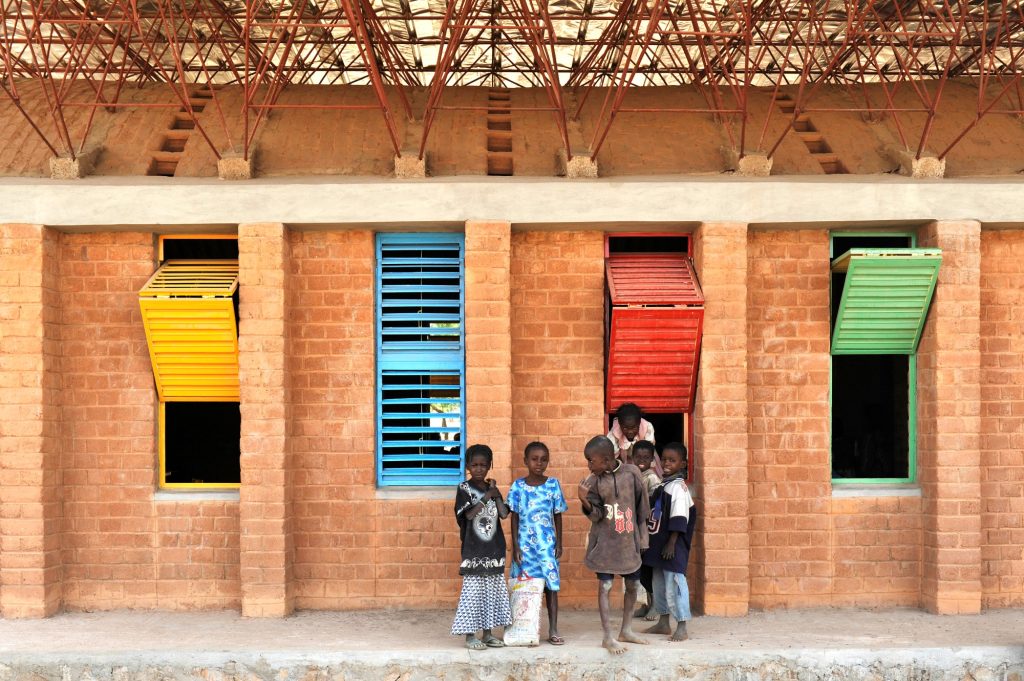 His advocacy for a child’s right to a comfortable classroom stems from his own experiences, sitting in crowded, stifling, facilities that were poorly ventilated and lit. Here, indigenous clay was fortified with cement to form bricks with high thermal mass, retaining cooler air inside while allowing heat to escape through a brick ceiling and wide, overhanging, elevated roof, resulting in ventilation without the mechanical intervention of air conditioning. 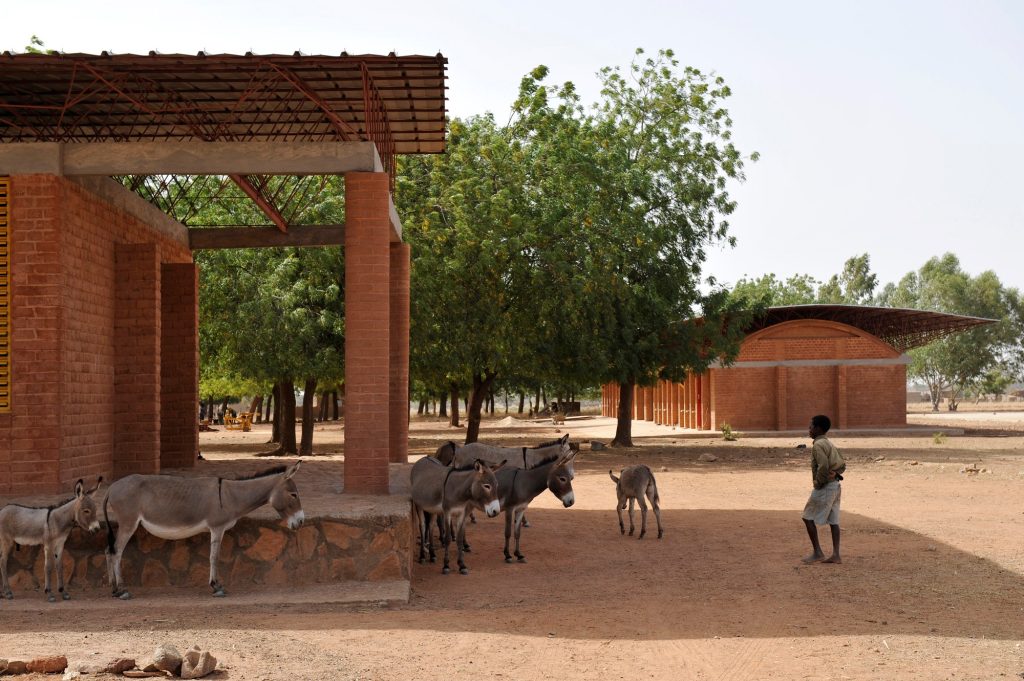 He fundraised internationally, while creating invariable opportunities for local citizens, from conception to vocational craftsmanship training. Indigenous clay was fortified with cement to form bricks with bioclimatic thermal mass, retaining cooler air inside while allowing heat to escape through a brick ceiling and wide, overhanging, elevated roof, resulting in ventilation without the mechanical intervention of air conditioning. The success of this project increased the school’s student body from 120 to 700 students, and catalysed Teachers’ Housing (2004, Gando, Burkina Faso), an Extension (2008, Gando, Burkina Faso) and Library (2019, Gando, Burkina Faso). 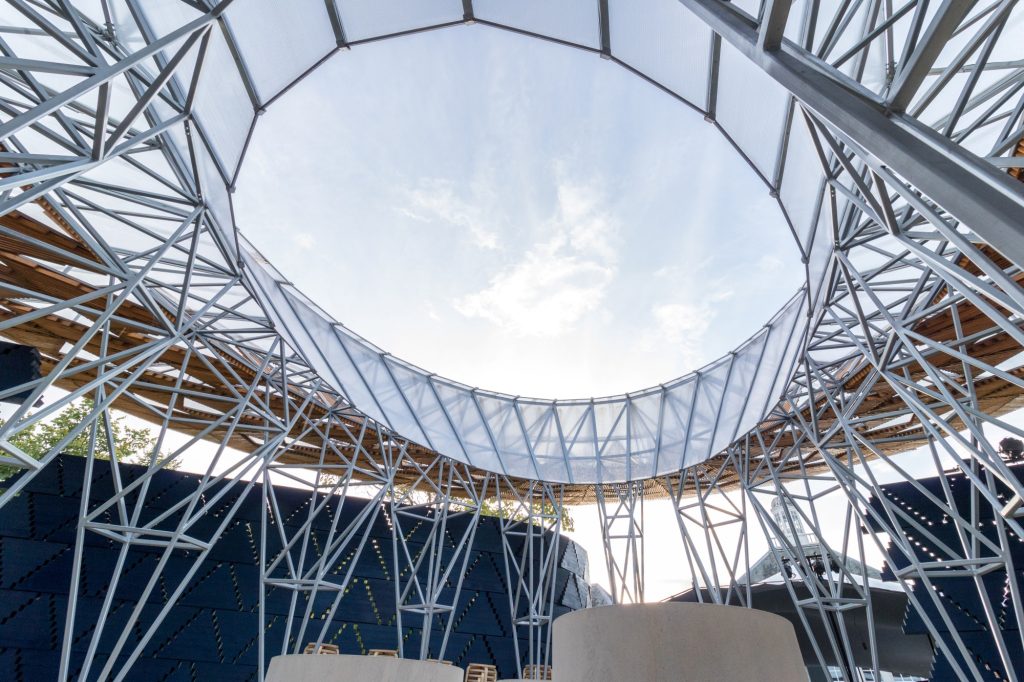 Kéré’s Serpentine Pavilion takes its central shape from a tree and its disconnected, yet curved walls are formed by triangular indigo modules, identifying with a color representing strength in his culture and more personally, a blue boubou garment worn by the architect as a child. Photo courtesy of Iwan Baan 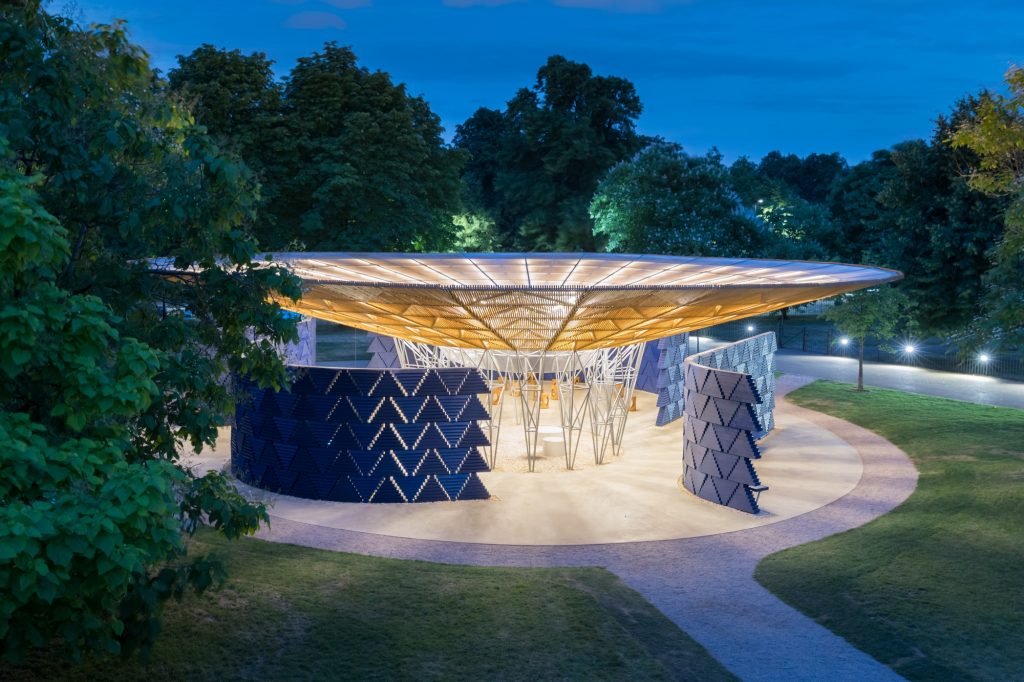 The 2022 Jury Citation states, in part, “He knows, from within, that architecture is not about the object but the objective; not the product, but the process. Francis Kéré’s entire body of work shows us the power of materiality rooted in place. His buildings, for and with communities, are directly of those communities – in their making, their materials, their programs and their unique characters.”

The impact of his work in primary and secondary schools catalysed the inception of many institutions, each demonstrating sensitivity to bioclimatic environments and sustainability distinctive to locality, and impacting many generations.

Startup Lions Campus (2021, Turkana, Kenya), an information and communication technologies campus, uses local quarry stone and stacked towers for passive cooling to minimise the air conditioning required to protect technology equipment. Burkina Institute of Technology (Phase I, 2020, Koudougou, Burkina Faso) is composed of cooling clay walls that were cast in-situ to accelerate the building process. Overhanging eucalyptus, regarded as inefficient due to its minimal shading abilities yet depletion of nutrients from the soil, were repurposed to line the angled corrugated metal roofs, which protect the building during the country’s brief rainy reason, and rainwater is collected underground to irrigate mango plantations on the premises.

The national confidence and embrace of Kéré has prompted one of the architect’s most pivotal and ambitious projects, the National Assembly of Burkina Faso (Ouagadougou, Burkina Faso), which was commissioned, although remains unbuilt amidst present uncertain times. After the Burkinabè uprising in 2014 destroyed the former structure, the architect designed a stepped and lattice pyramidal building, housing a 127-person assembly hall on the interior, while encouraging informal congregation on the exterior. Enabling new views, physically and metaphorically, this is one piece to a greater master plan, envisioned to include indigenous flora, exhibition spaces, courtyards, and a monument to those who lost their lives in protest of the old regime.

A poetic expression of light is consistent throughout Kéré’s works. Rays of sun filter into buildings, courtyards and intermediary spaces, overcoming harsh midday conditions to offer places of serenity or gathering. The concrete roof of Gando Primary School Library was poured around a grid of traditional clay pots, that once extracted, left openings allowing heat to escape while circular beams of natural light could linger and illuminate the interiors. A facade constructed of eucalyptus wood surrounds the elliptical building, creating flexible outdoor spaces that emit light vertically.

Benga Riverside School (2018, Tete, Mozambique) features walls patterned with small recurring voids, allowing light and transparency to evoke feelings of trust from its students. The walls of Centre for Health and Social Welfare (2014, Laongo, Burkina Faso) are adorned with a pattern of framed windows at varying heights to offer picturesque views of the landscape for everyone, from a standing doctor to a sitting visitor to a lying patient.

All images are copyright of the respective photographers and artists cited, and courtesy of The Pritzker Architecture Prize. 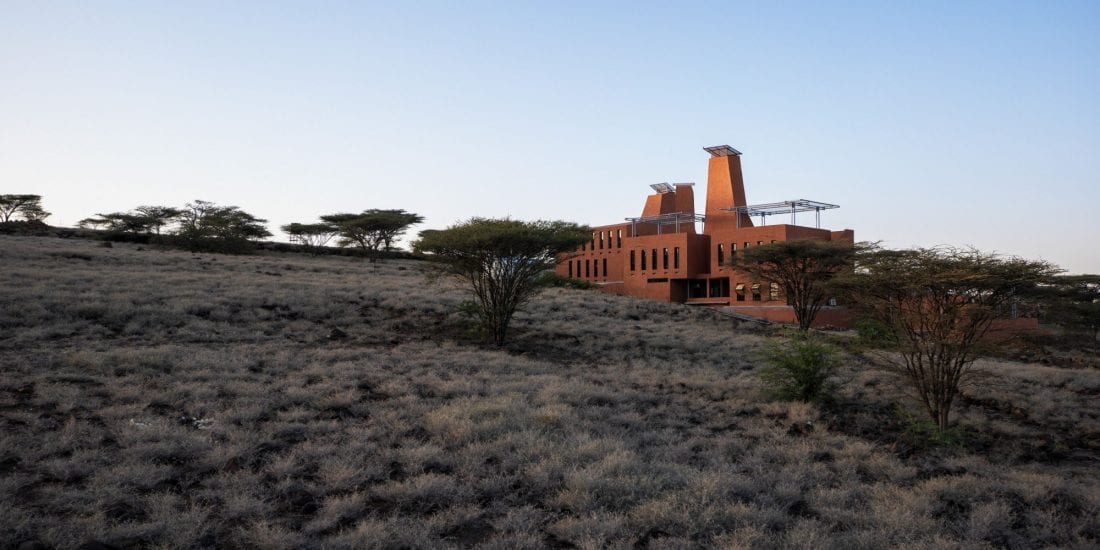 Startup Lions Campus is an information and communication technologies (ICT) campus, located on the banks of Lake 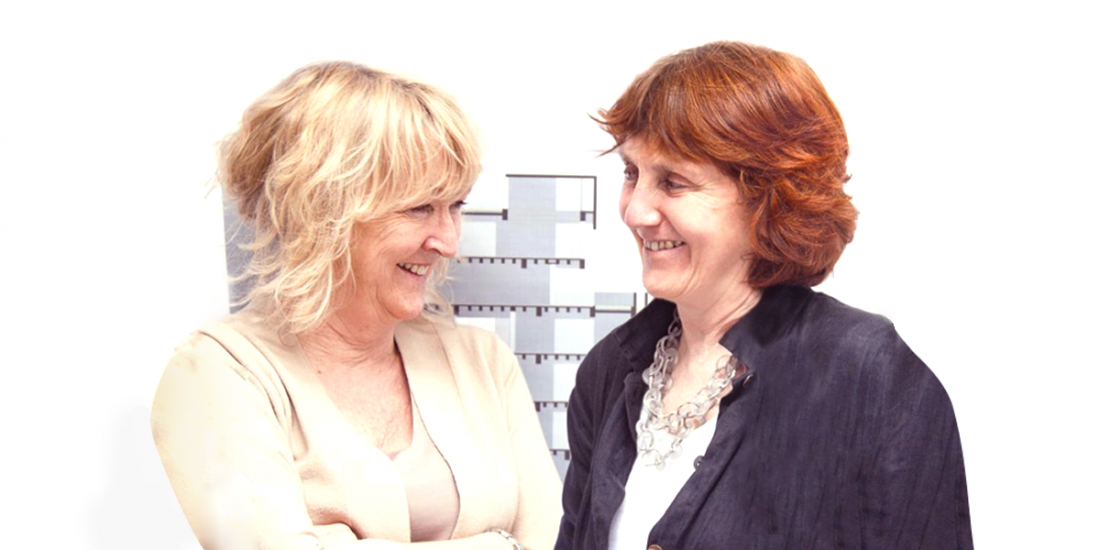 Yvonne Farrell and Shelley McNamara of Dublin, Ireland, have been selected as the 2020 Pritzker Prize Laureates