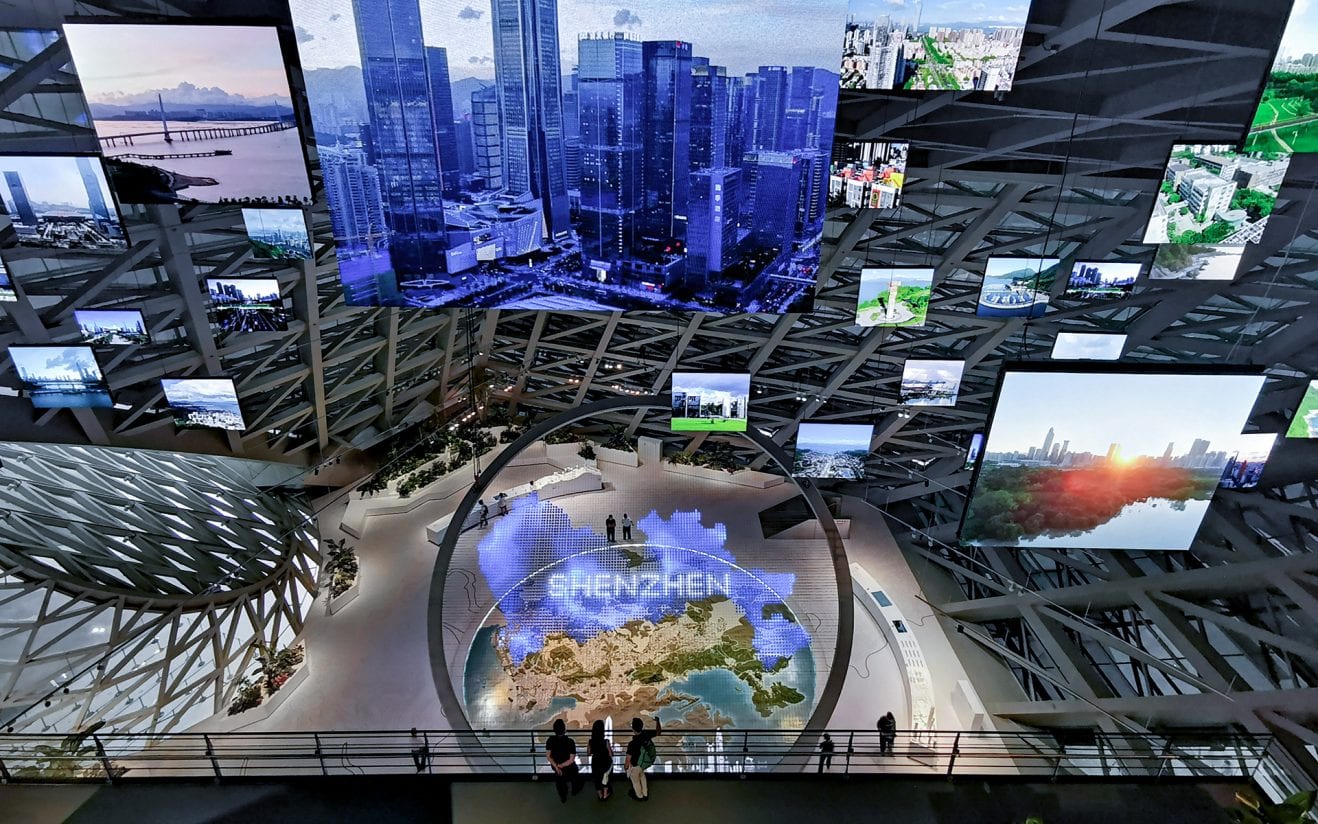 The Museum of the Futuristic City of Shenzhen

The Museum of Contemporary Art & Planning Exhibition, MOCAPE has a dedicated permanent exhibition on the urban planning of the city of Shenzhen that is designed by Atelier Bruckner. 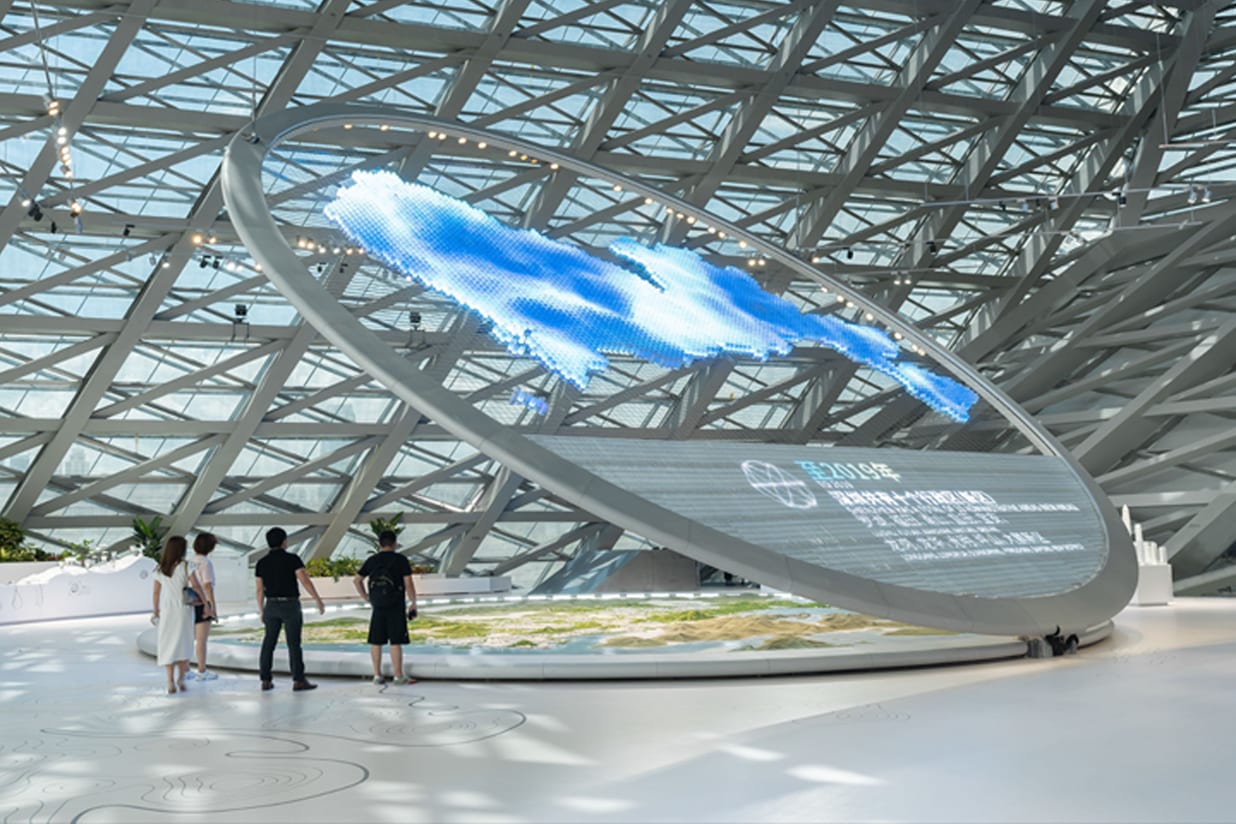 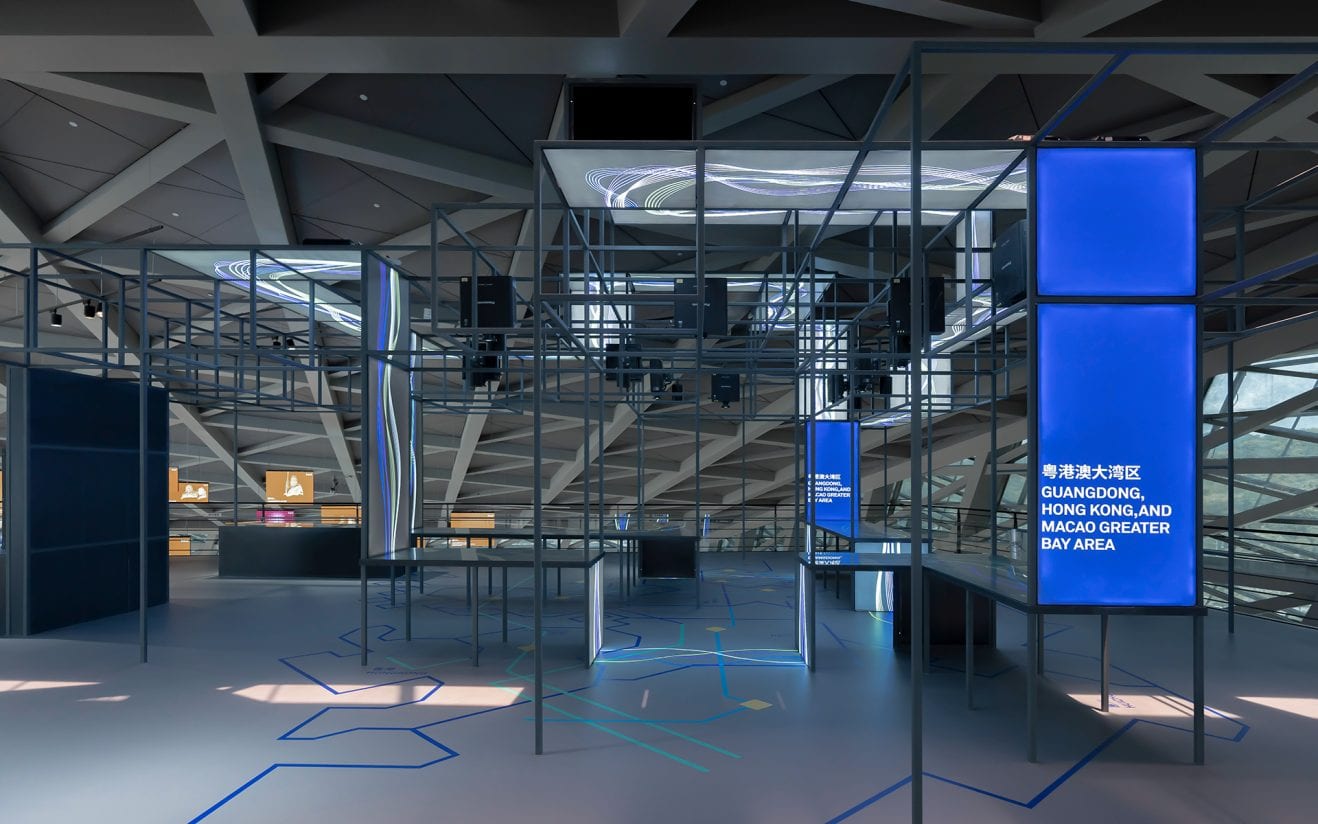 The city of Shenzhen, a metropolis in South China with more than 12 million inhabitants, has a new attraction to offer: the MOCAPE – Museum of Contemporary Art & Planning Exhibition, designed by the Austrian architect Coop Himmelb(l)au. It consists of two parts, which are dedicated to contemporary art and urban planning. ATELIER BRÜCKNER designed the exhibition, which concerns the topic of urban planning and is set out over an area of just under 8,500 square meters.

“Designing an exhibition is a process on eye-level with the exhibition curators.  It is about the content first – and how it can be transmitted to the visitors in a long-lasting, entertaining way. Key objects have to be figured out, storylines have to be created, a design language has to be invented following the content and the architectural surroundings. Each vitrine, each display is part of an overall content-based design. We are architects specialized in scenography,” explains the exhibition architects of the Atelier. 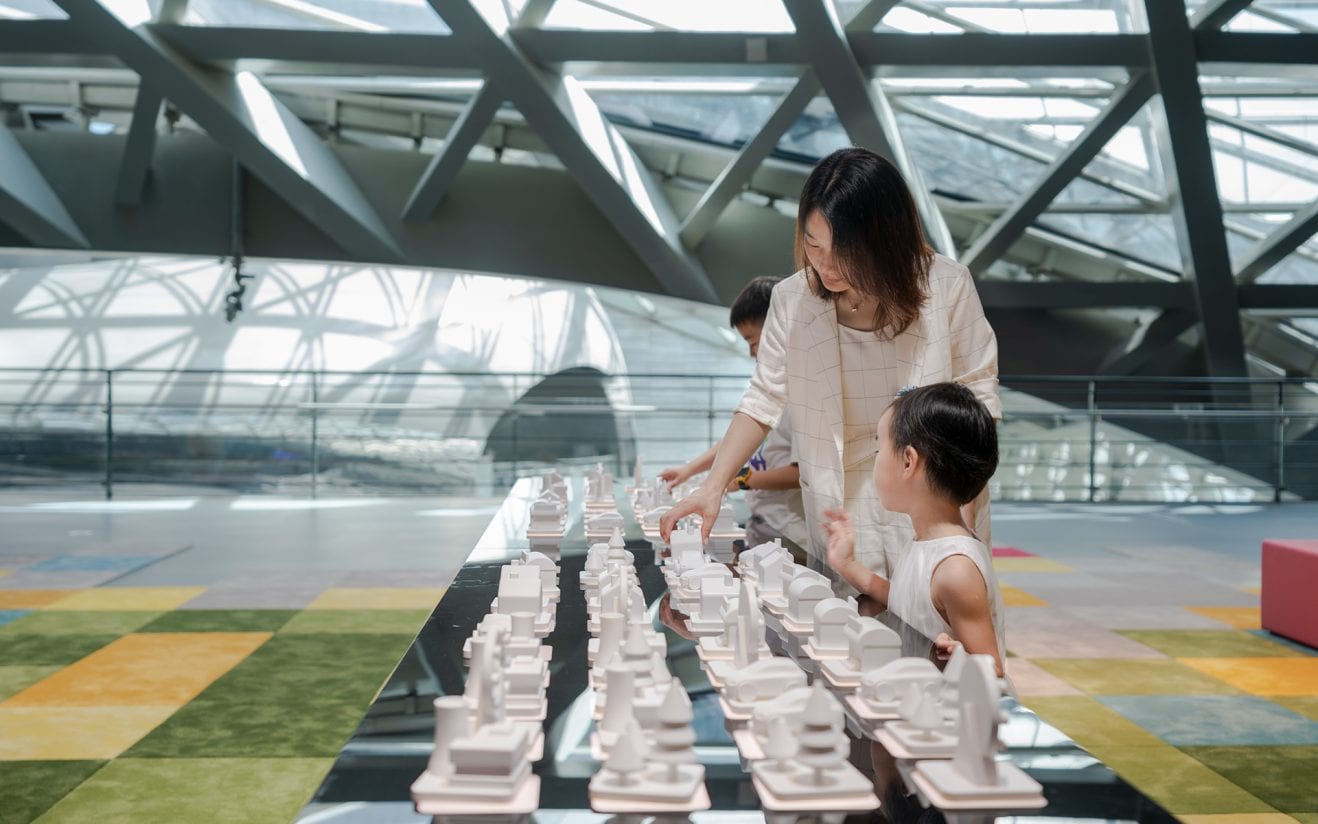 And scenography creates form from content, giving the latter meaning and purpose. “It generates its staged spaces from ideas, objects, and stories in order to finally convey their messages to an audience. Scenography re-contextualizes, which makes tangible objects talk and succinctly endows them with relevance for the present.”

Shenzhen is one of the fastest-growing cities in the world; up until the late 1970s, today’s megacity was not much bigger than a village. In just a few decades, it has developed into a city of millions and become a high-tech center with electronically based processes that are used for diverse applications ranging from local public transport and garbage disposal to facial recognition. 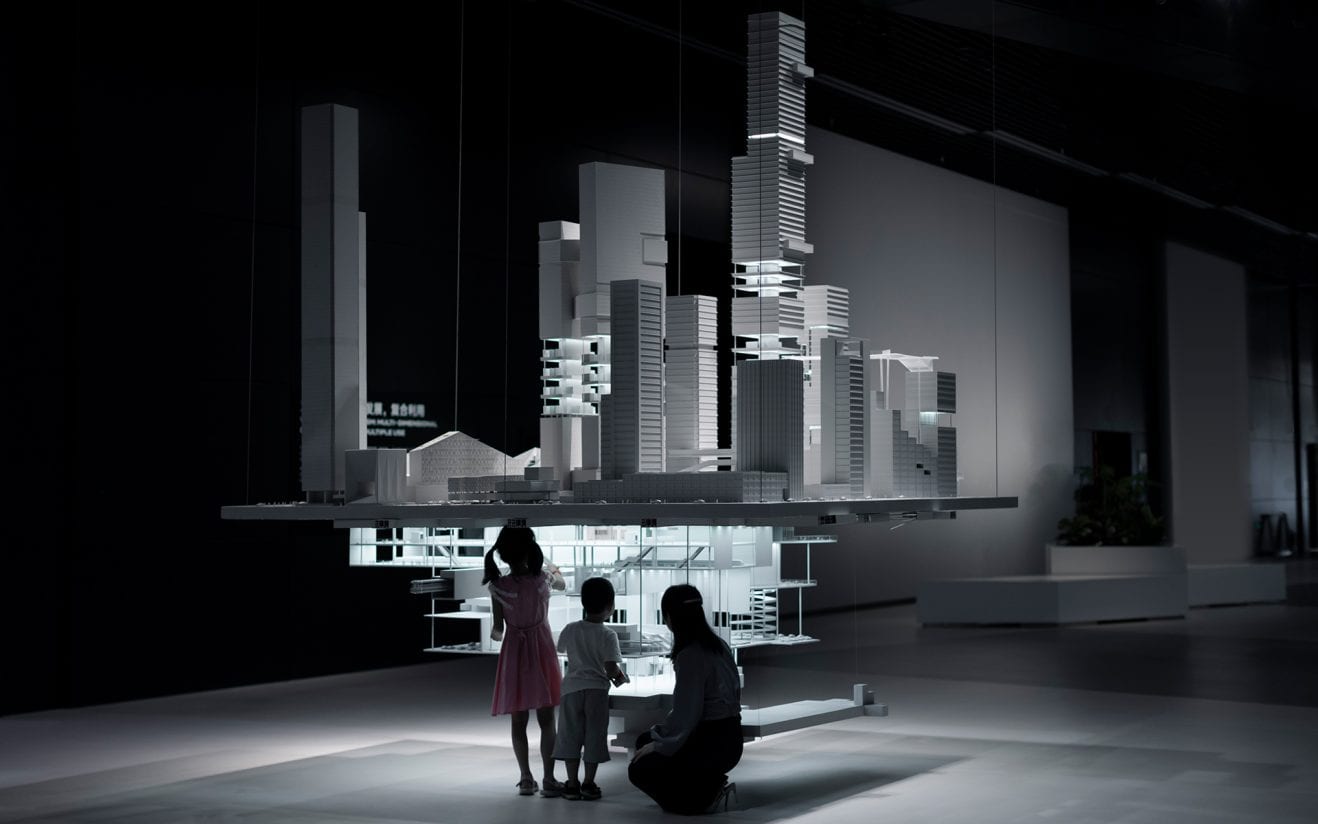 The Urban Planning Museum portrays the urban-planning history of this futuristic city. It shows Shenzhen in all its vitality, characterized as it is and has been by continuous change and growth.

Following the motto “Shenzhen is Vitality”, the permanent exhibition is divided into three large areas, each with a specific theme: “City Co-Existence”, “City Co-Construction” and “City Co-Wish” according to the architects at Atelier Bruckner.

The Atelier has designed multiple exhibitions and they say, “A successful exhibition offers authentic and unmediated experiential spaces, telling fascinating stories in which arcane knowledge is made accessible to the visitor.”

“A floor is dedicated to each theme. The basic design concept is a grid system – a symbol for the abstract process of urban planning. Within the grid, visitors gradually get closer and closer to the city. All the floors and the contents are connected to each other by the”Shenzhen Lens”, an impressive, multi-media installation with a diameter of 15metres that is located in the atrium, which goes 50 meters right up to the top of the building,” explain the team. 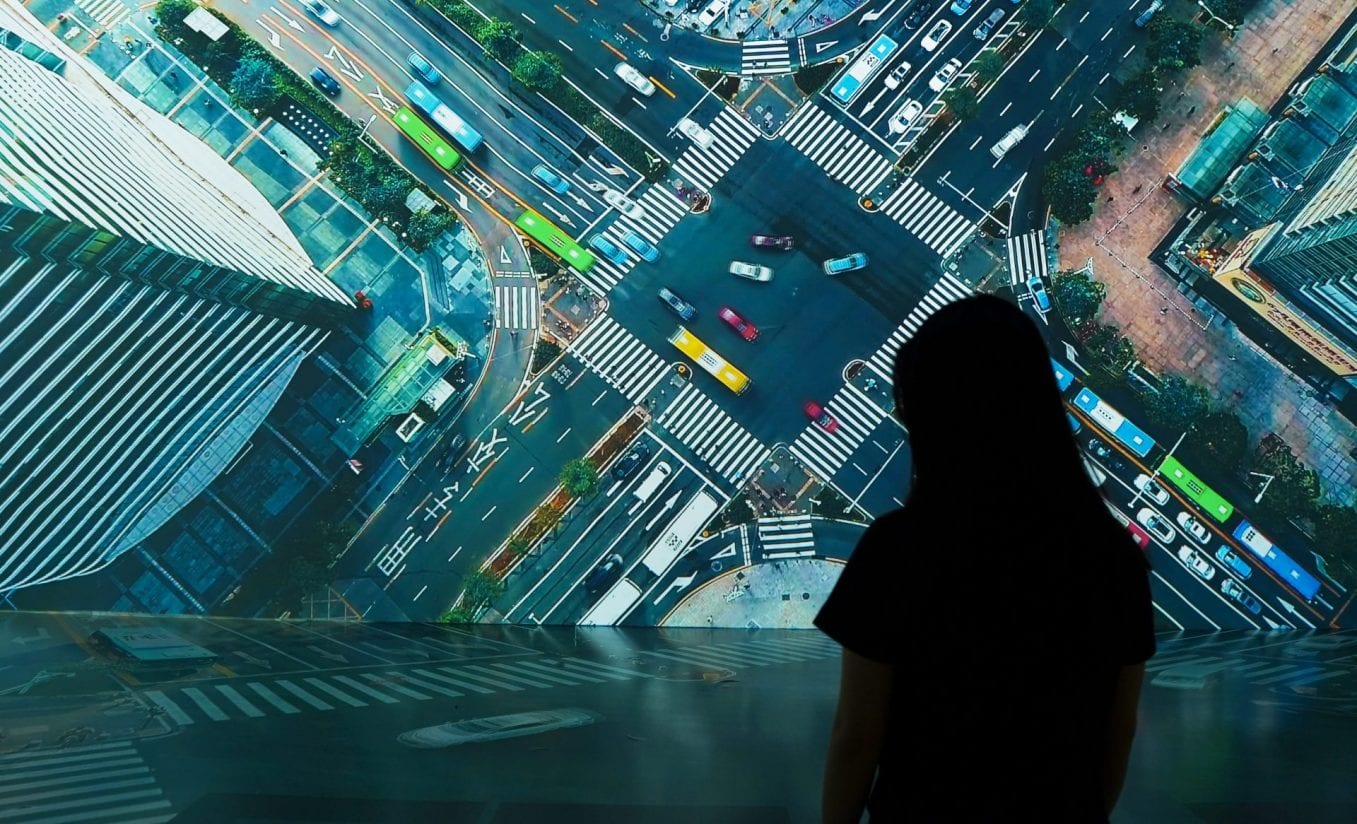 In the “City Co-Existence” area, visitors initially view the city of Shenzhen from a distance. An extensive floor graphic illustrates the scenic interrelationships: the coastline and the surrounding mountainous area. White models show parts of the landscape and convey the idea of abstractly conceived urban planning in relation to the given geographical reality and the pre-existing resources.

Augmented reality breathes life into the models: the landscape changes due to its inhabitants; animals begin to stir and colours shown on the display motivate people to obtain further information.

The further the visitors advance into the themed area, the closer they get to the city: the grid becomes bigger, the questions more concrete. For instance, infrastructure questions arise: How can a city of millions be supplied with sufficient electricity and water? 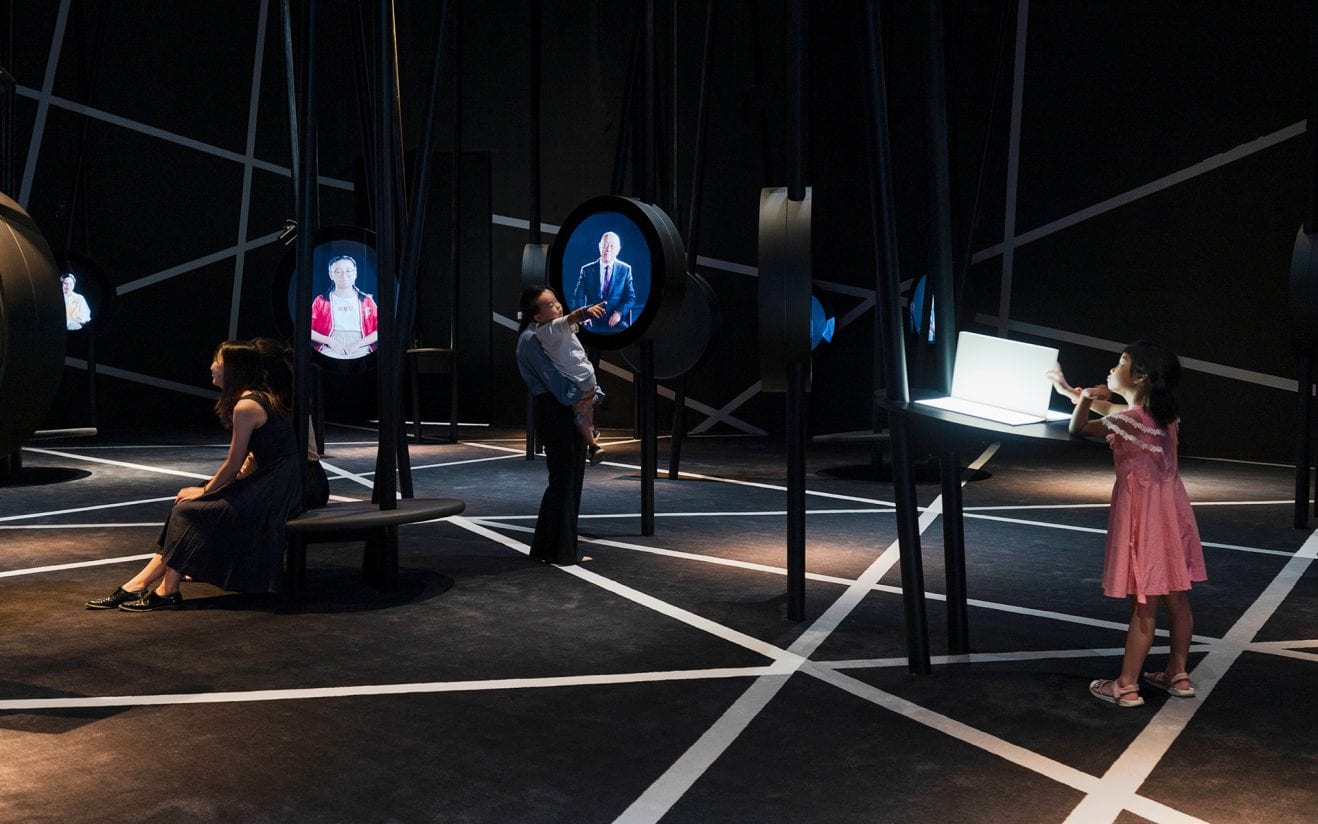 Finally, the inhabitants of the city themselves speak out on the topic of coexistence. The “Space and Society” room, which is kept dark, shows interviews on round displays. They are connected by white lines, which are interlaced in the room as a symbol of the explosive and thoroughly experimental development of the city. 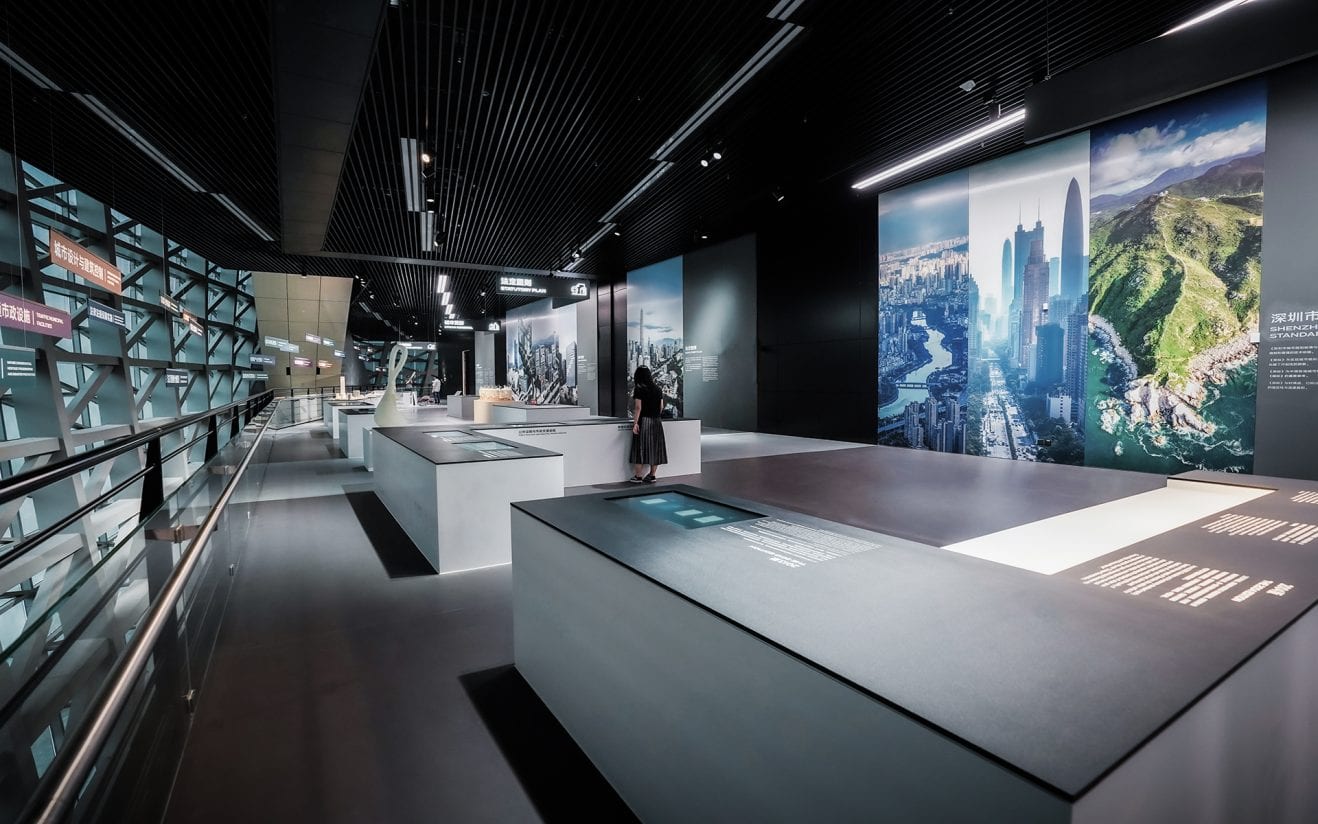 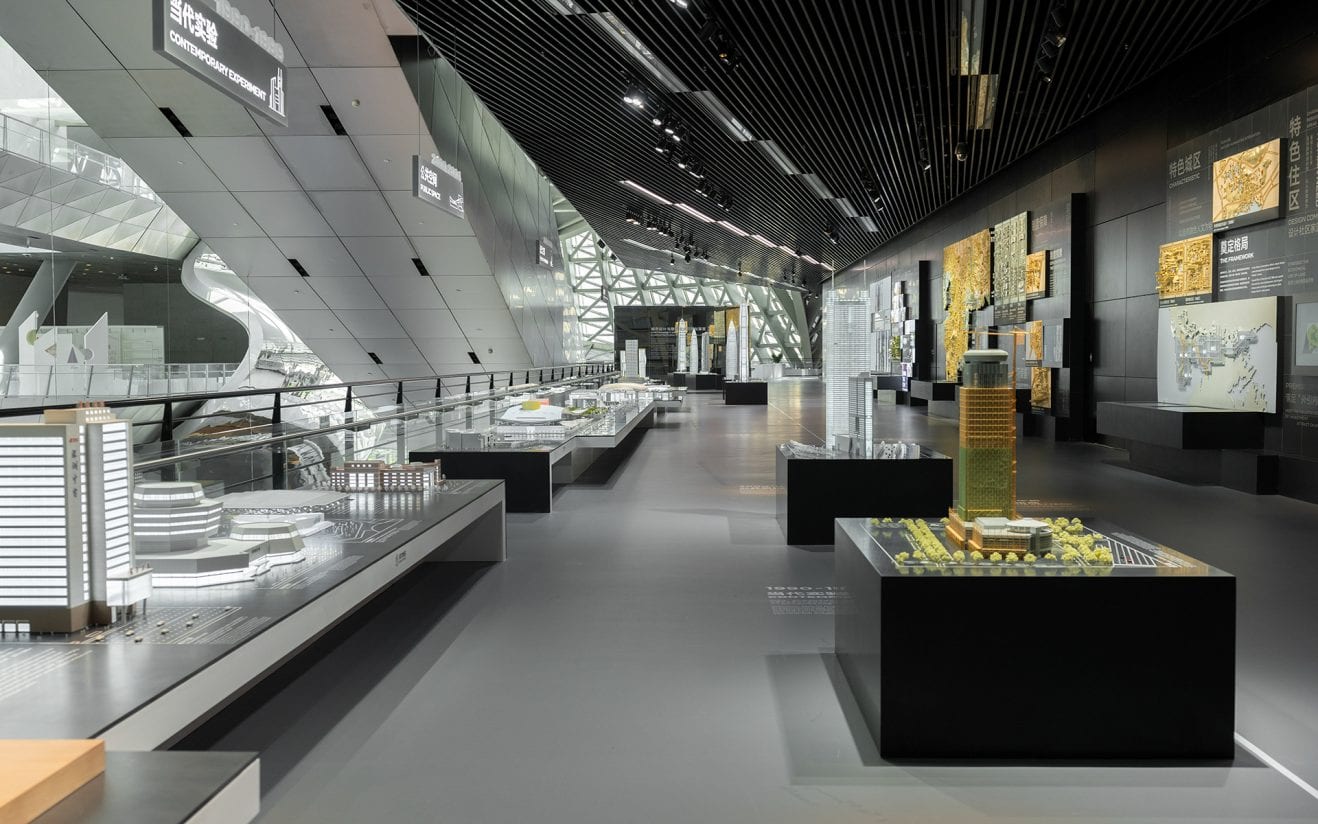 In the second themed area as well, the museum visitors approach the city of Shenzhen step by step. The “City Co-Construction” aspect concerns concrete urban planning, whereby the exhibition presents the master plan of Shenzhen from the year 1979 and relates it to the city’s present-day appearance. 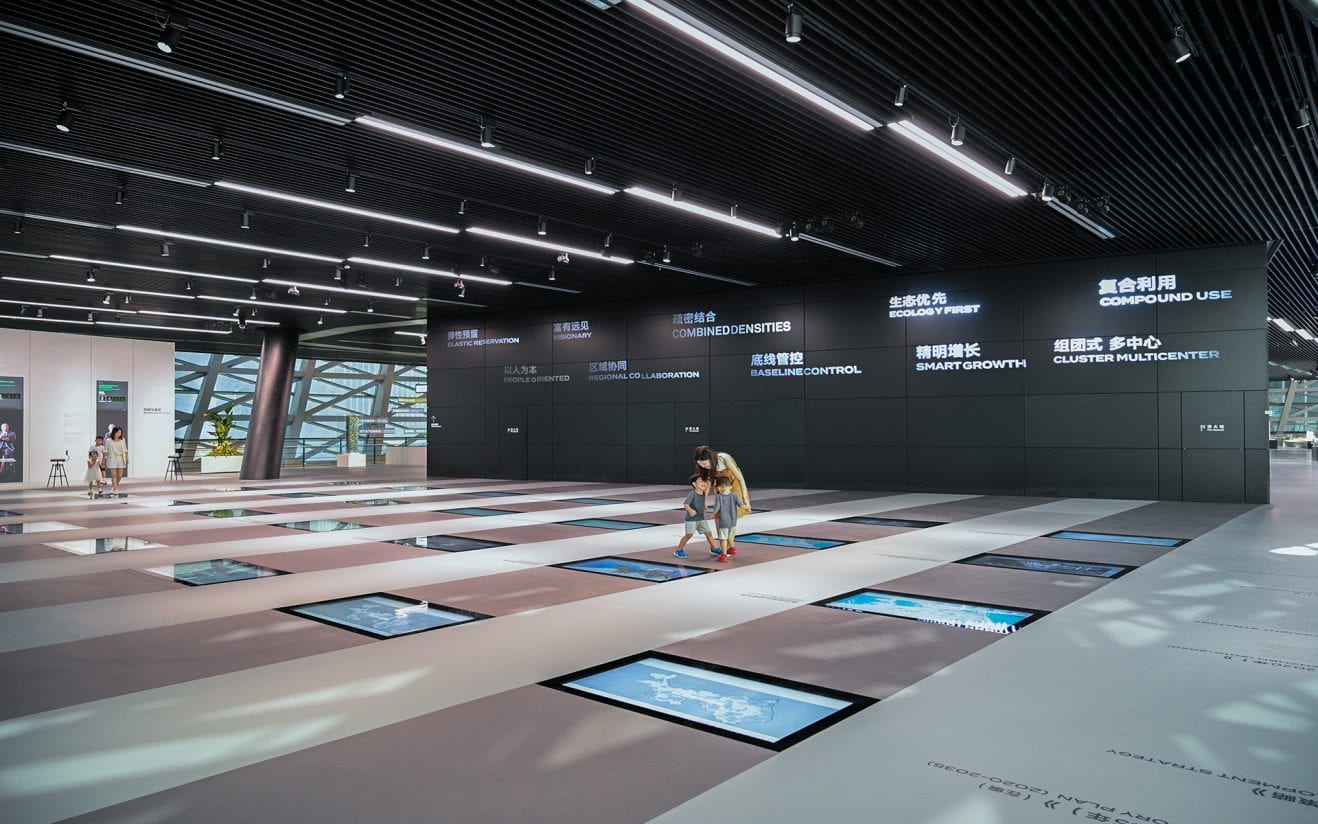 Monitors let into the floor give the impression of observing Shenzhen from a bird’s eye perspective. They are arranged in four rows, each with seven screens, and show individual aspects of the planning phases 1986, 1996–2010, 2010–2020, and 2017–2035, for instance, the number and location of public green areas. Renowned urban planners share their thoughts on the master plan with the museum visitors in that their video statements can be seen on steles. 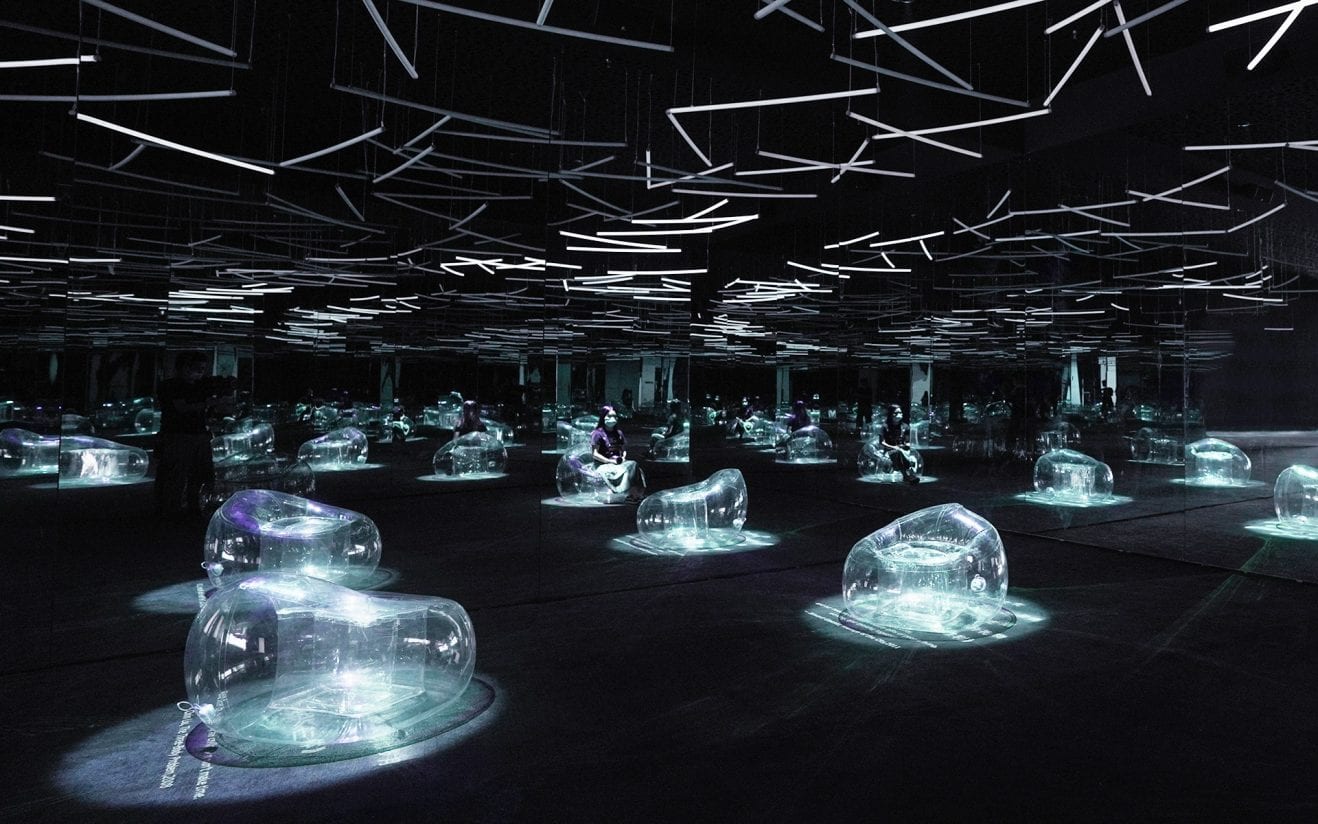 The third exhibition level presents the theme of “City Co-Wish”. In a rather abstract way, it deals with ideas and theories concerning all aspects of urban planning and traces an arc from the past to the present and then into the future. The design of the exhibition is reminiscent of building-site scaffolding; it conveys the transformation that Shenzhen is still undergoing. 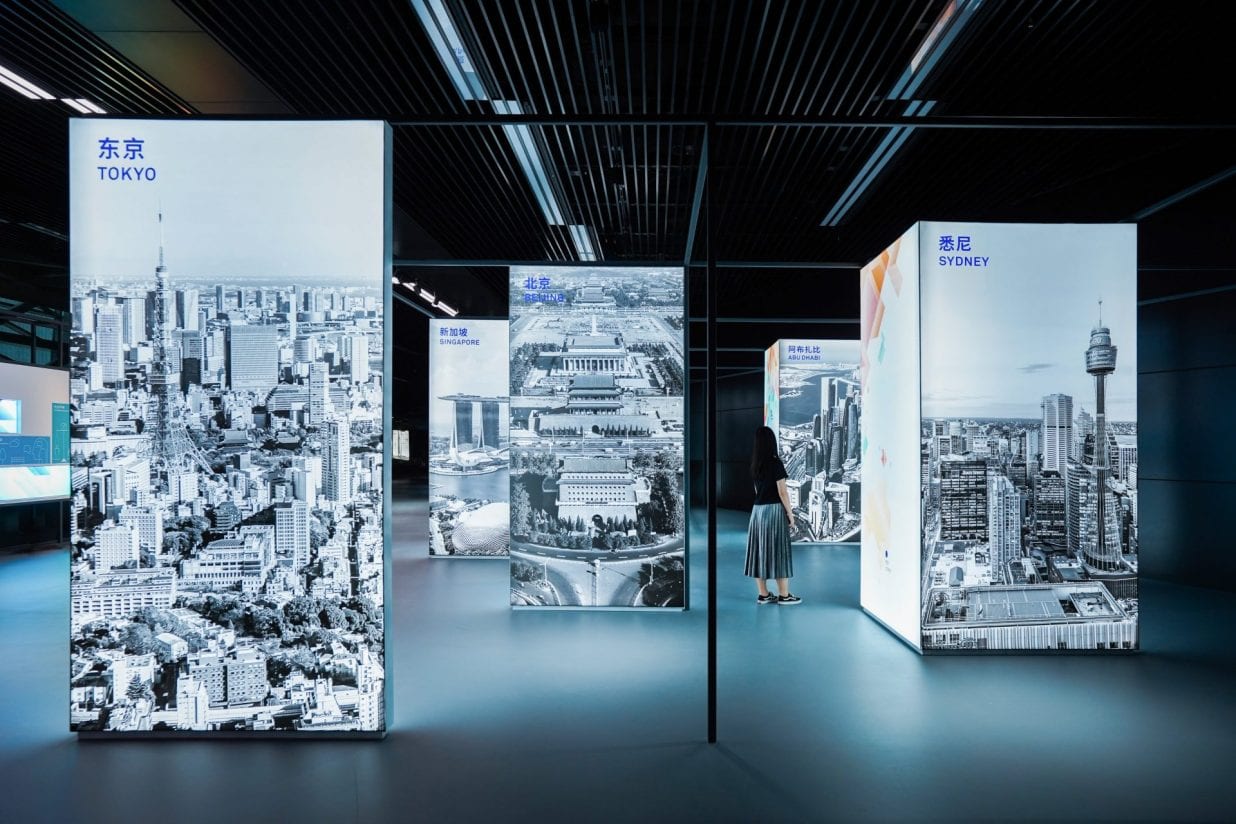 The Shenzhen Lens, the highlight of the exhibition, conceptually connects all three floors of the building and the contents of the different themed areas. Consisting of three “levels”, which overlap each other like the sketching paper of an architect, it visualizes the planning process itself. The lowest level relates to the first themed area and therefore to the basic structure of the landscape of Shenzhen. The second area shows how the city evolved and was embedded in its natural surroundings. The third level is manifested in the form of numerous screens that are suspended above the lens. Museum visitors can display their wishes for the city of Shenzhen on the screens or follow the streams of movement in the city in real-time.