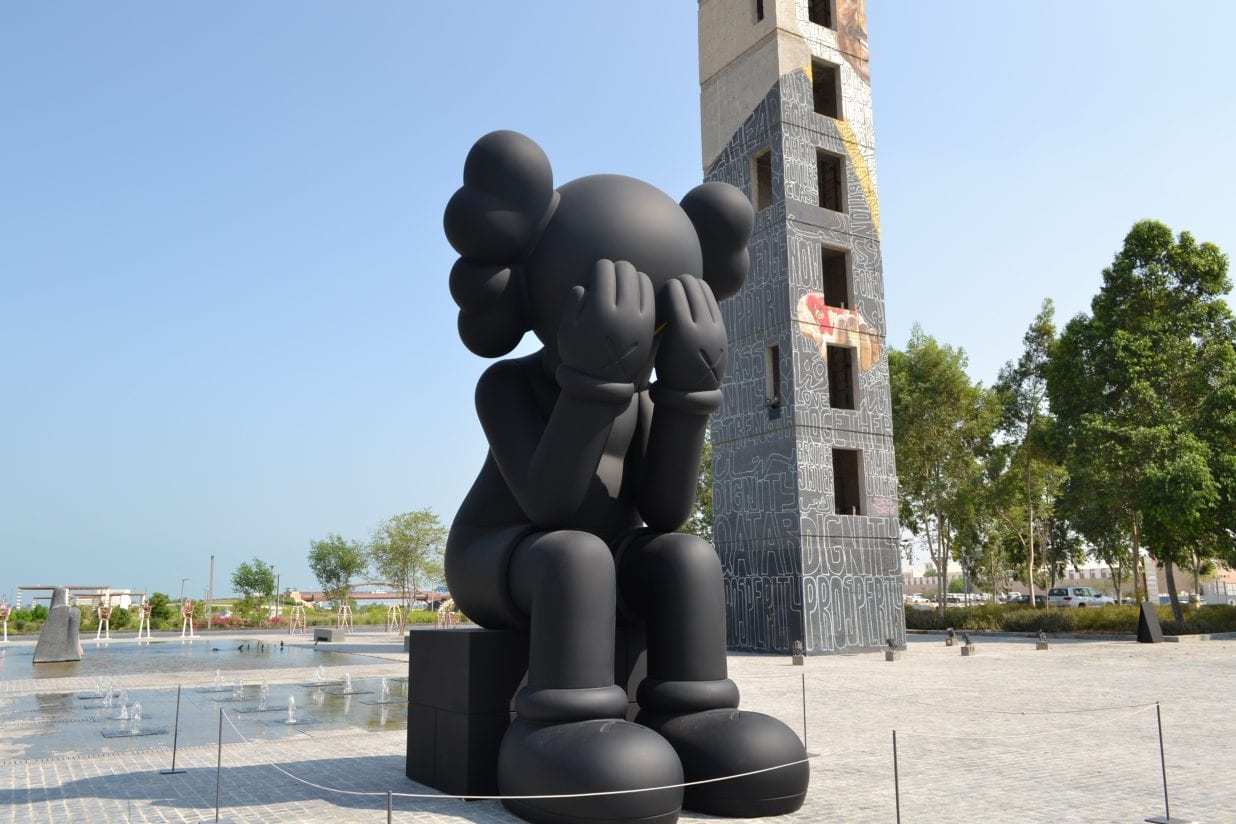 KAWS: HE EATS ALONE, at the Fire Station Museum, Doha, is the first museum show in the Middle East dedicated to Brian Donnelly, better known as Kaws, the most popular living artist in the world who has to his credit not just art forms but a coveted line of vinyl toys, associations with high-end brands like Dior and Nike, Sesame Street and Uniqlo, and a mounting social media popularity. By Sindhu Nair 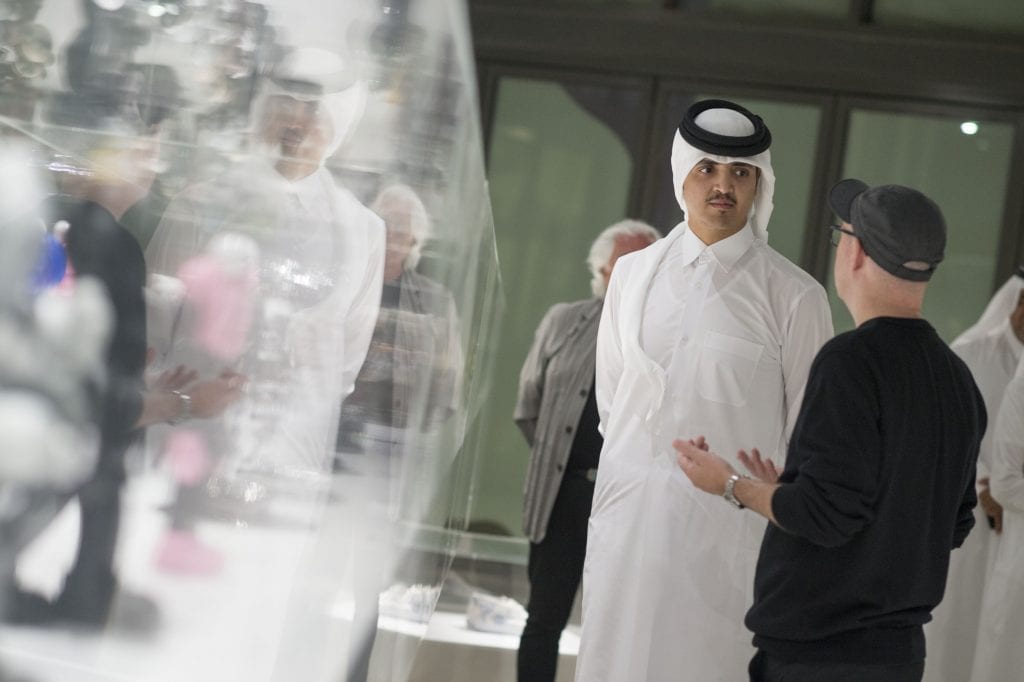 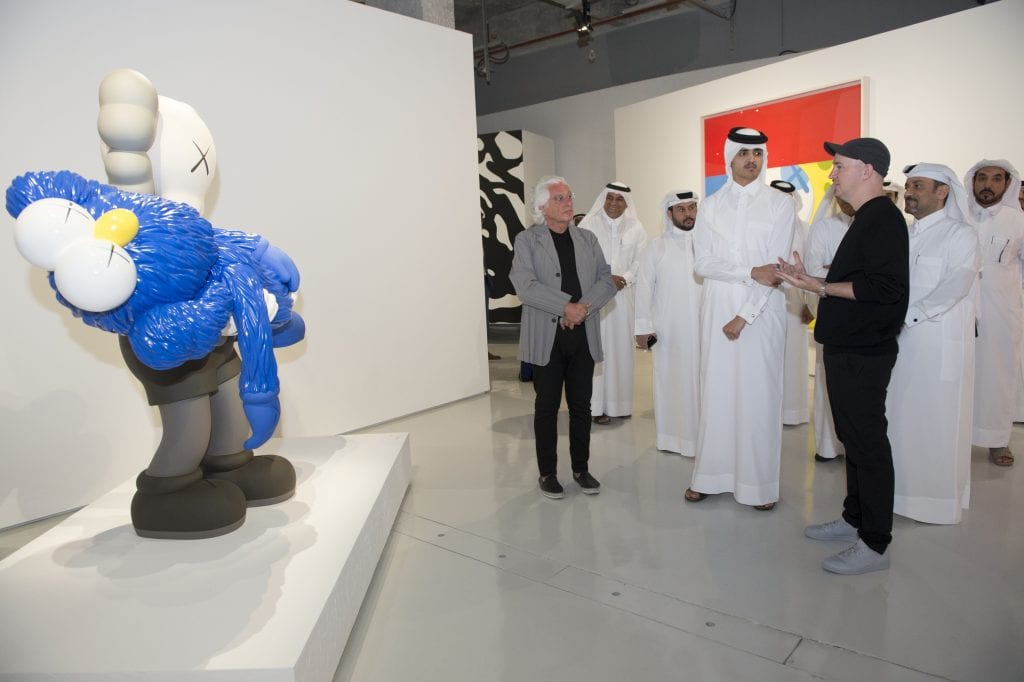 To have a perspective of Kaws’ popularity, check these figures: in November 2018, five Kaws pieces sold for more than $1 million, and across the year his work realised over $33.8 million at auctions. His Instagram followers have touched 2.5 million and is growing as you read this. Every day a new Kaws’ doll is being purchased. I spoke to an architect father who was heading to The Doha Fire Station Museum to buy one of Kaws’ merchandise for his teenage son who is a fan of the cult. The reason for his adulation, the teen says, “If I was an artist, I would follow the same style as Kaws, represent art as figure toys, a medium that everyone would understand.”

The Doha population is at odds; to love and embrace this anomalous creativity that has burst on its landscape or question the art behind this cult form that the world has already bought into? For now, the new generation seems to have made the decision and have embraced Kaws into their midst as the older generation ponders over the value of merchandise over art. 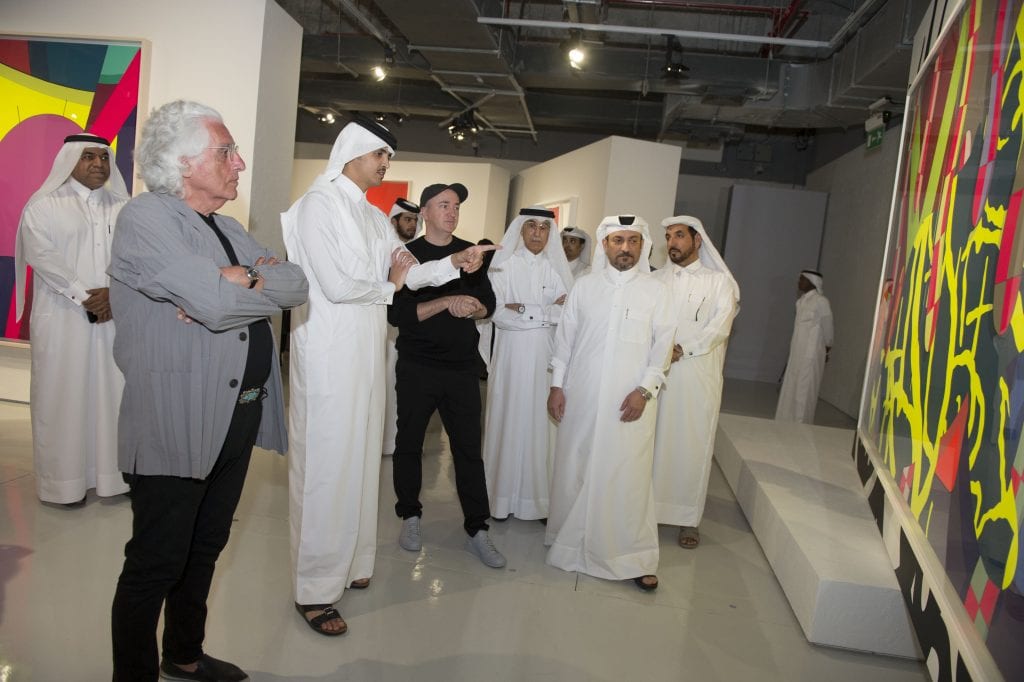 The exhibition features 40 artworks representing the artist’s studio practice on view at the Garage Gallery in the Fire Station and a monumental (40-meter long) inflatable sculpture titled Holiday (2019) is to be installed in the Dhow Harbour. Some 90 products and commercial collaborations designed by Kaws – among them sneakers, skateboards, and toys – are presented in the archive located on the second floor of the Fire Station’s Café building. And this is what is attracting the youth of the country who have already shown their enthusiasm to buy the merchandise. 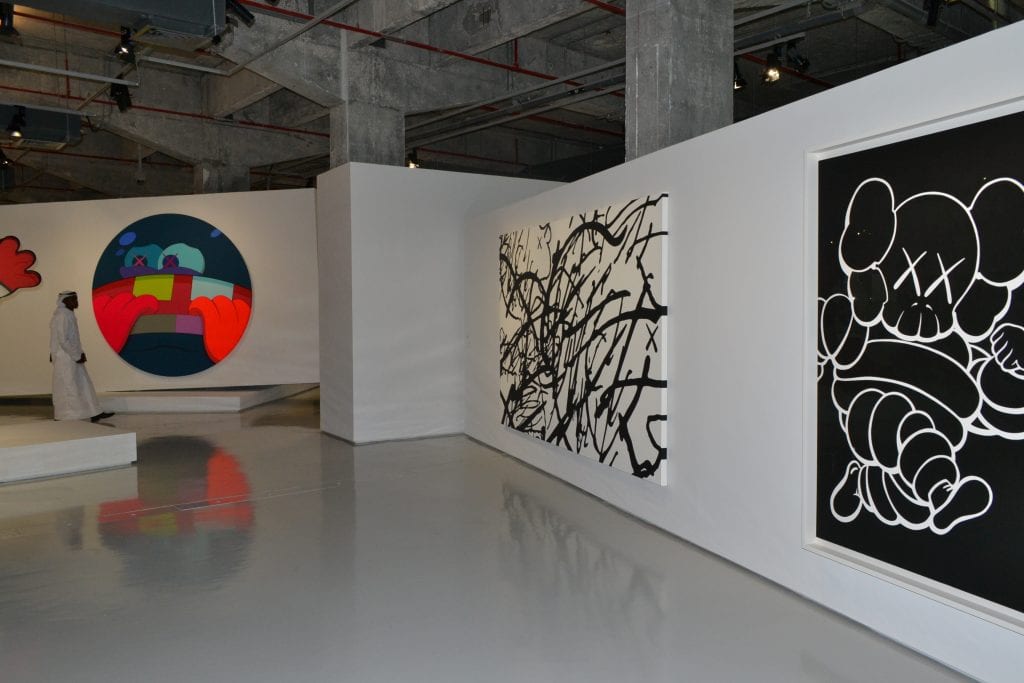 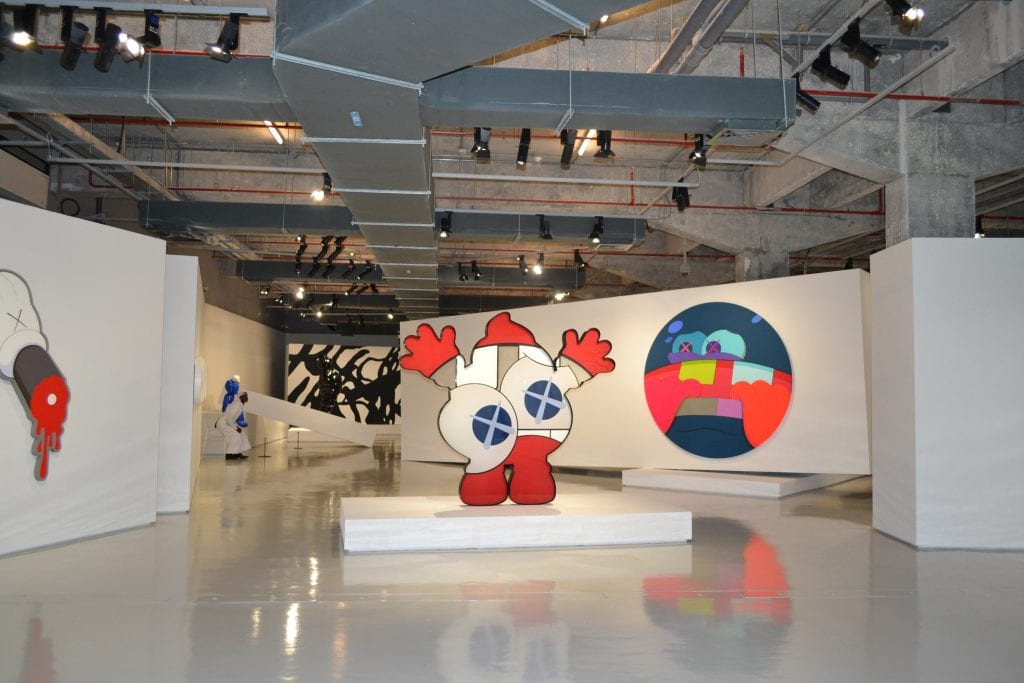 Kaws: He eats alone is beautifully presented in the large gallery space at the Fire Station Museum with the visitors’ eyes instantly resting on the art piece from which the exhibition takes its name.

Kaws has a cult following that loves everything the designer creates, but the man who has taken the art world by storm through the popularity of his art, Brian Donnelly is unpretentious, soft-spoken and seems a contrast to the huge attention-grabbing characters, bold and colourful prints that attract eyeballs. Brian wants attention on his work, not on the economics that is being written about. “Honestly, I wish the headlines were about the work,” said the 45-year-old artist to The Guardian. This was right after his painting made an art market sensation when it smashed estimates and set the artist’s auction record, selling for $14.8 million at Sotheby’s in Hong Kong. Brian’s previous auction record was $2.7 million and this work, Kaws Album sold for more than 14 times its high estimate. SCALE asks him how he views his success and he says, nonchalantly, “I don’t dwell much on that. I have been doing this for many decades and it’s the work that matters.

But none of the fame has come easy to Brian, after a degree in illustration and years of anonymity in New York taking to the streets to make his art visible, through street graffiti, and later when he juxtaposed his art over posters, giving his take over Calvin Klein, and Guess advertisements, a form of art which is now called “sub-vertisements”. It wasn’t any anti-establishment thoughts that motivated him rather his need to be seen. “The advertisements were present everywhere and it was an effort to be seen that made me do it, so you can say it was proof of existence than anything else. I started thinking about communicating to a larger audience and that’s when I thought about the parallels of graffiti and advertisements. It was more about not waiting around for opportunity but taking the opportunity to reach a larger audience,” he says. About his move from being a street artist to an artist of such cult value, he has this to say, “It just happened, I haven’t thought much about being in a category than about the work I was involved in.” 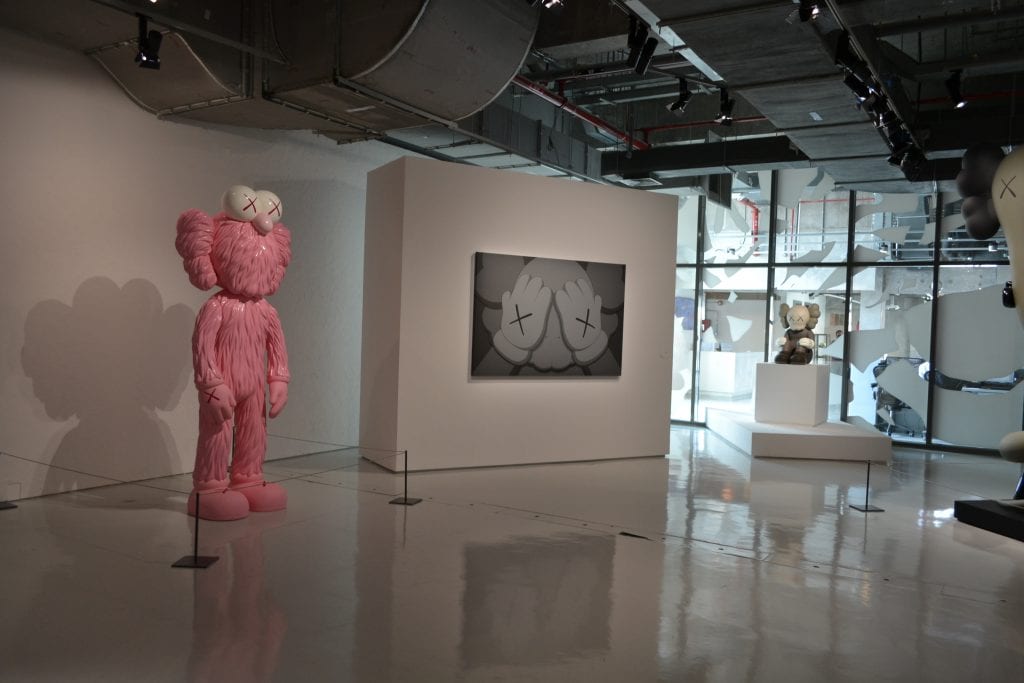 The Doha exhibition contains large scale, artist-produced graphic installations that envelop the complex, inviting the visitor into the singular world of Kaws. The museum’s Garage Gallery is transformed into a labyrinthine of gallery spaces designed by New York-based studio 2×4.

Especially captivating is the layout of the exhibits and the surprise element with each Kaws piece hiding behind a fragmented wall and sculpted platform that adds to the drama. These elements anchor and frame the works throughout the exhibition, including the titular piece He Eats Alone (2014), an early painting M2 (2000), signature character sculpture Chum (2008, black) and Accomplice (2010). 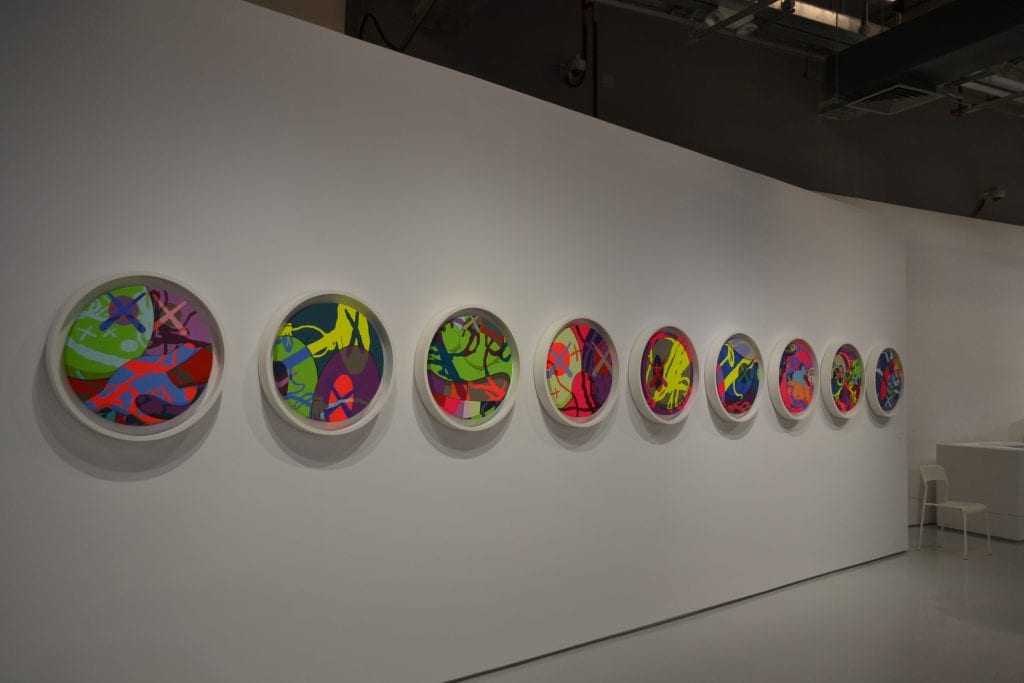 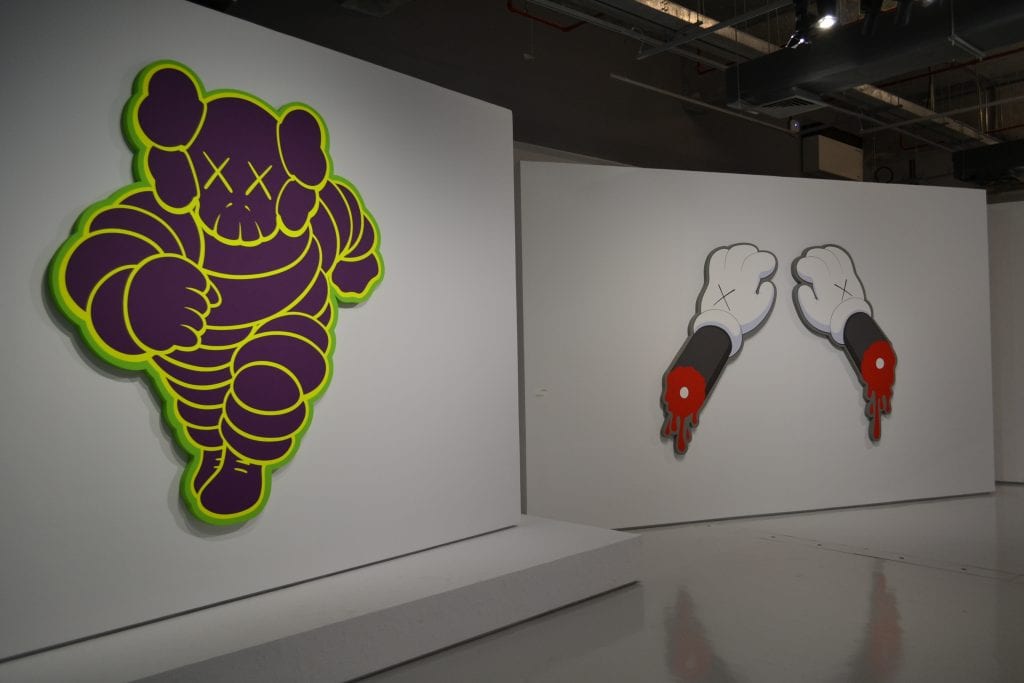 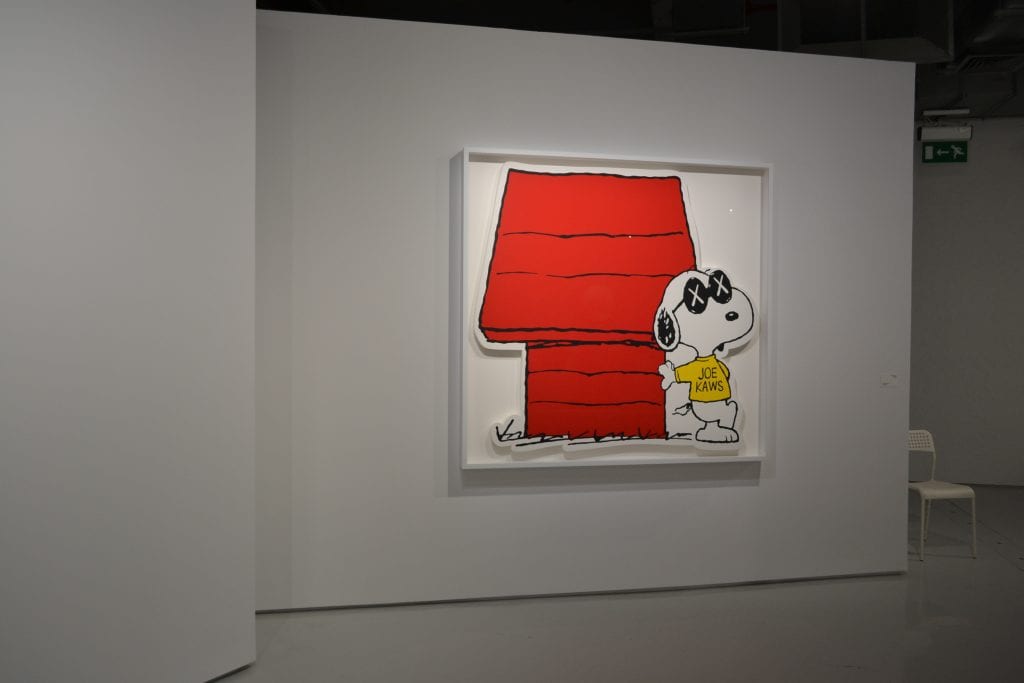 Across the courtyard, the archive features a wide array of smaller Kaws objects in a series of intimately scaled, display figures. The Kaws editions from 1999 to 2019 on view range from fashion and design objects to plush toys and skateboards produced in collaboration with diverse companies and brands.

The Companion figure, which was created by Kaws in 1999 and represented one of the artist’s first characters in 3D, is likewise the subject of the large-scale inflatable, titled Holiday (2019), to be installed in Doha’s Dhow Harbour. The 40-meter-long figure, in this iteration in a reclined position, was installed earlier this year on a campground at the base of Mount Fuji in Japan. 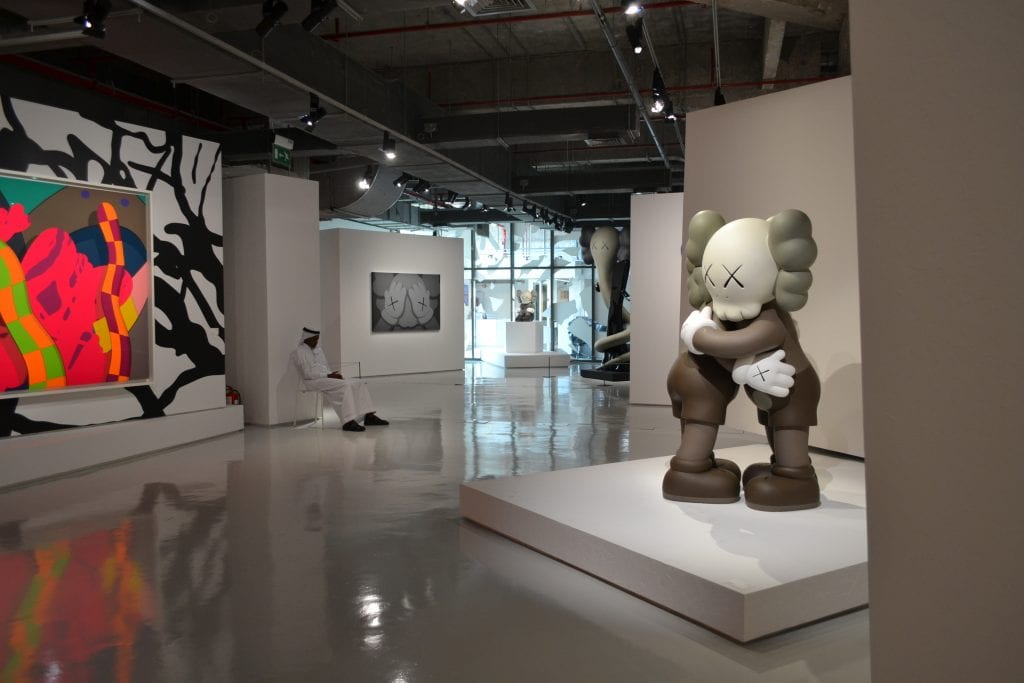 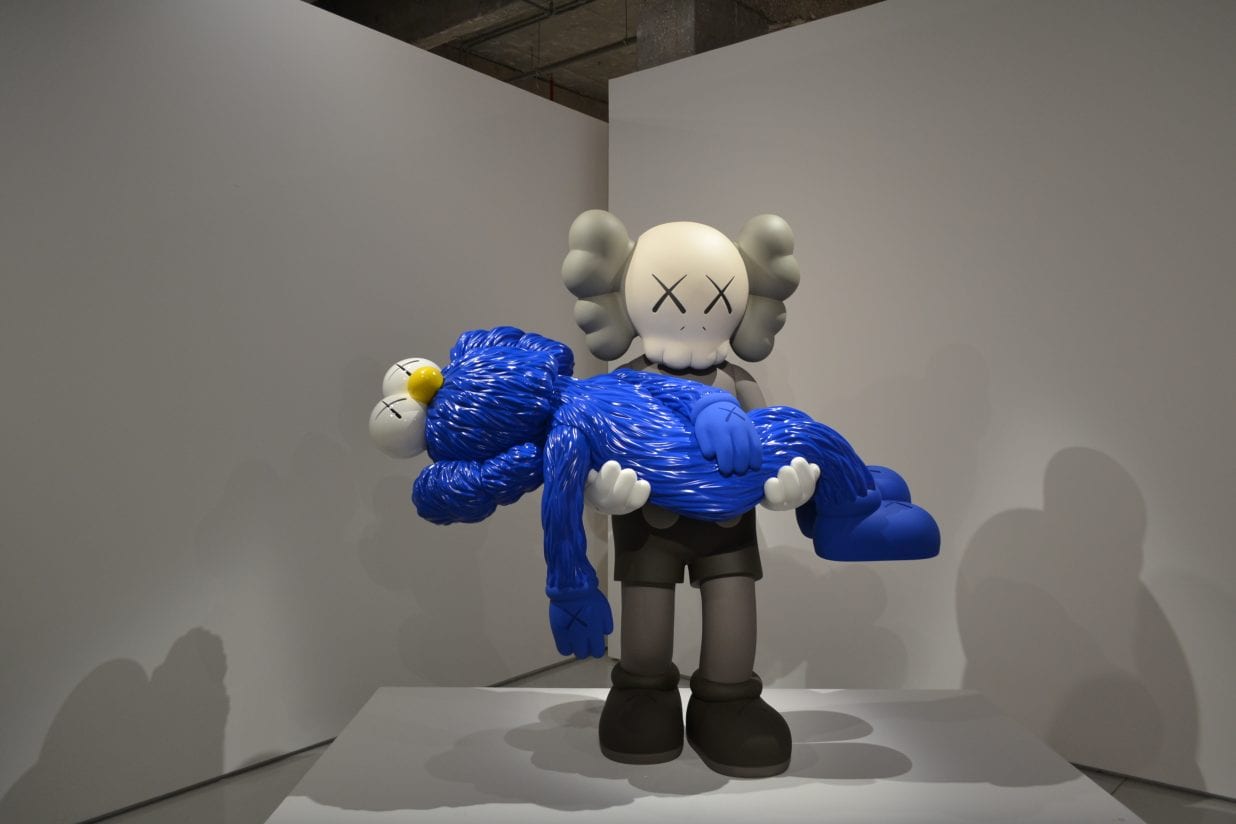 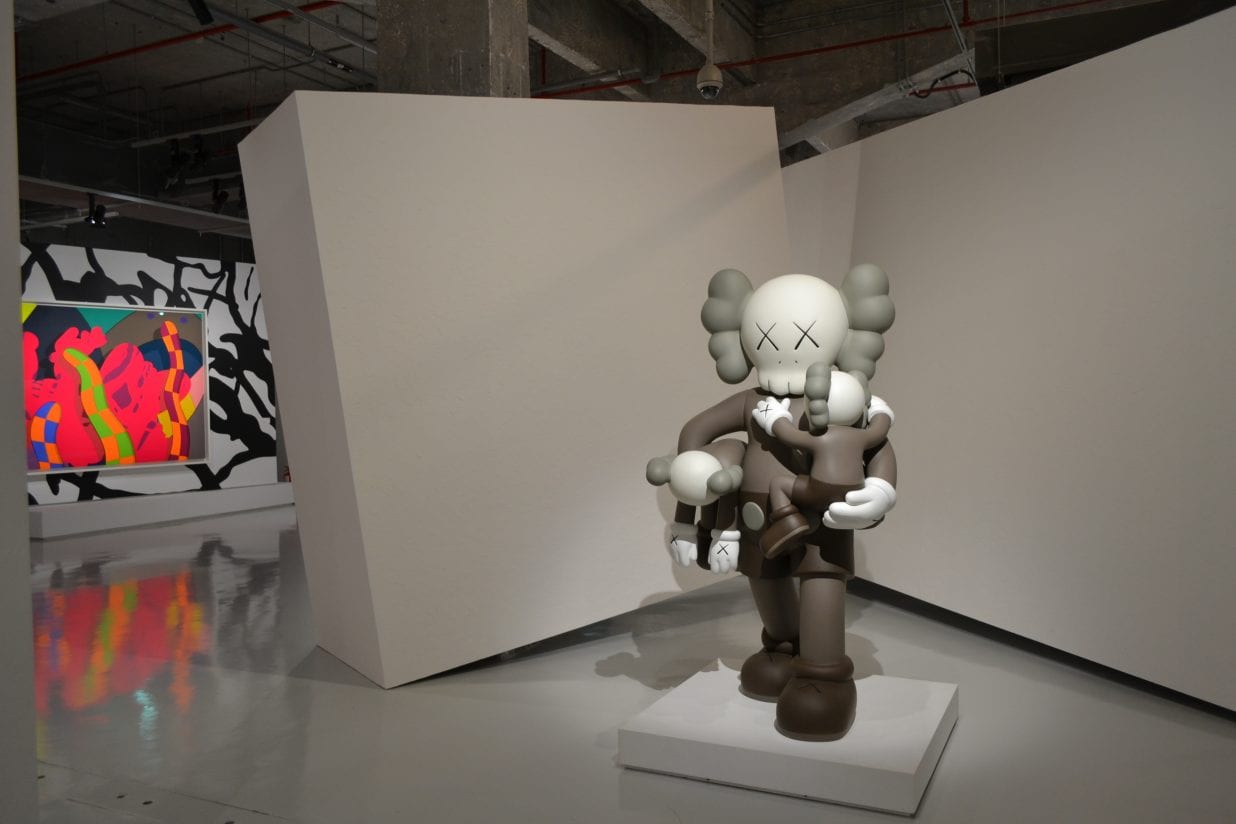 Talking about the artist’s work, curator of the exhibition, art historian and, critic, Celant says: “The figures by Kaws are inflected in the world through a system of global communication and distribution. They are delicate, original forms that graft into every earthly context. They bear witness to the cosmopolitan spirit of art “without place” always aware of having to negotiate its presence with the already existing market of signs. It is an acknowledgment of the iconic materials in circulation that have led us to a nomadic, and now virtual, culture.”

It is then that we look deep into the large figures of Kaws and deduct the sense of loneliness, despair, and consolation in their stance, or the crossed-out eyes that seem to project our feelings onto the figures, reflecting our own sense of dejection or euphoria on to these pop figurines, and in some of them, like the Companions or BFFs, a favourite of mine that seems to derive comfort from another presence. 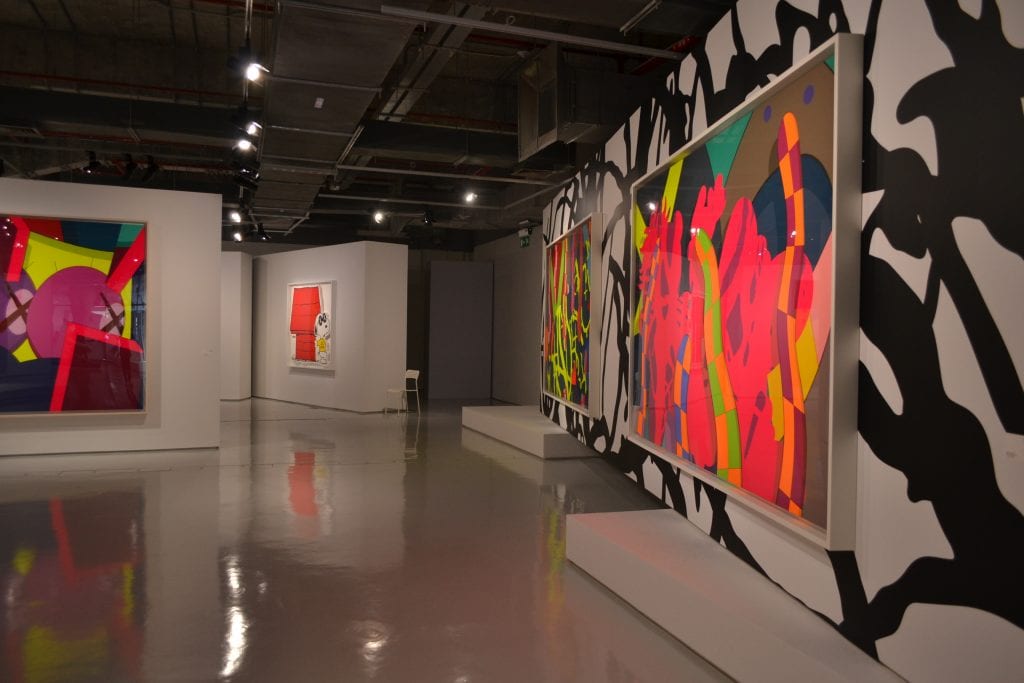 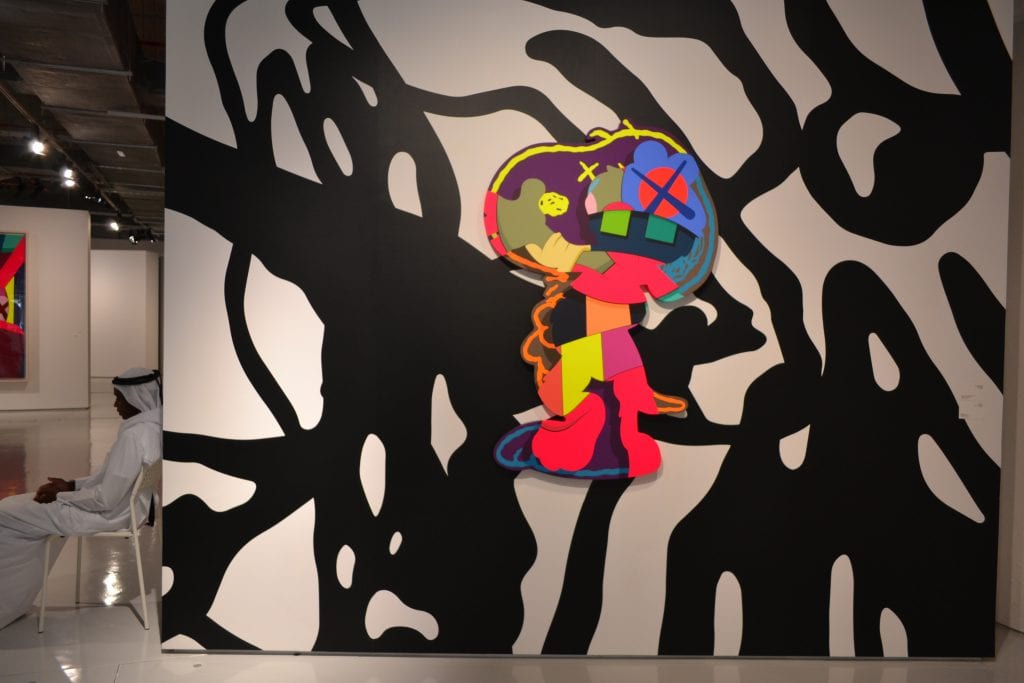 These heroes, seem to be dejected when alone but when together they embrace or support one another, and Brian seems to understand all these qualities of the human mind as he reacts to the growing loneliness around in the world. An art critic calls Brian, a humanist, who is engaging on an emotional level with people, and I agree with this perspective. In Doha, that is what Brian is looking out for, for people to ask questions about his work, engage in dialogues and understand the creativity behind the pop art and not just to fall prey to the marketing but understand it for the connect he has created by making art accessible and not elitist.

Brian talks about the use of his crossed-out eyes, “It started when I painted over the ads, originally it was just my letters and then it transitioned to a skull and the cross over the eyes. As I thought more, it felt more like a universal image, and it can be in any country and it would work anywhere.”

For someone whose art forms have been classified as pop culture, subversive and even pointless promotional, Brian is quite unconcerned as long as he can create, he says, “I have come to know that I cannot control what people think. We want people to come back with their perspective. So, what people say is not what I want to control, they are entitled to have an opinion.”

Mohammed Al Suwaidi, an architect by education and an artist by habit, says, “Kaws’ work is an interesting interpretation of commercial culture influencing the artist, within various platforms through the use of vibrant tones and colour palettes that attract an audience.” 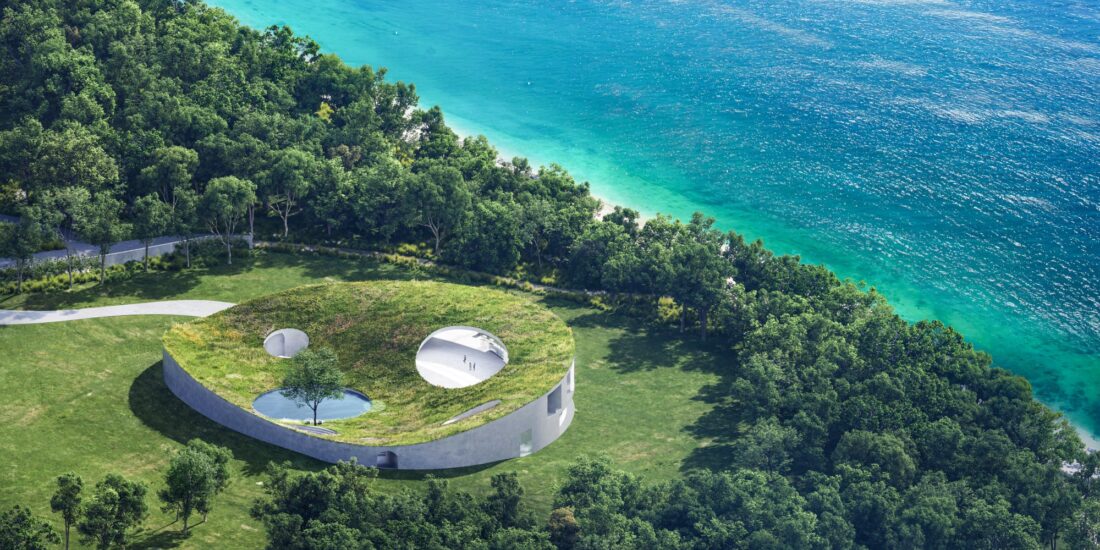 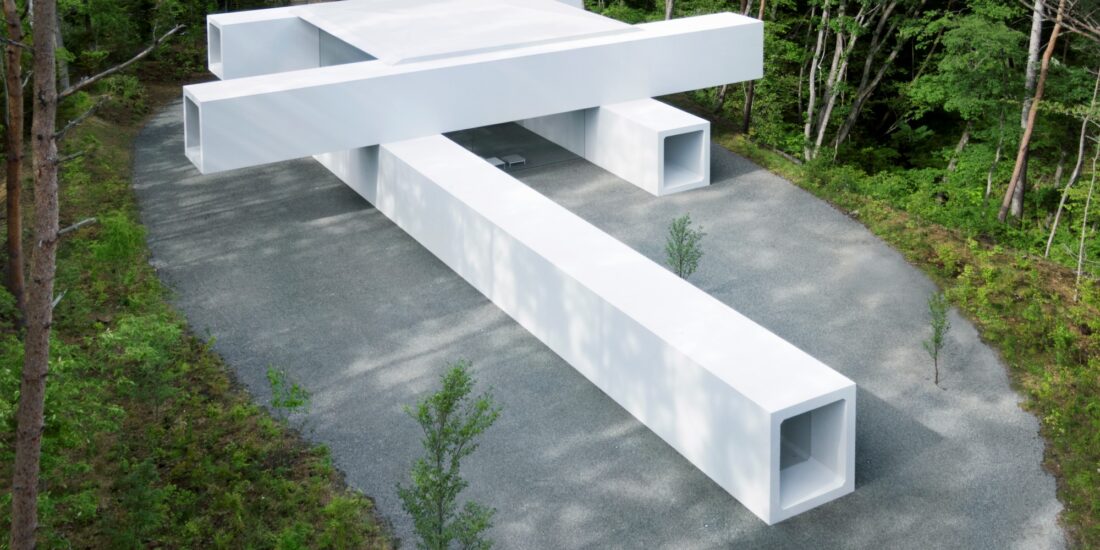 Street Art is a Platform to Interact with People

Assil Diab, a Sudanese visual artist, graphic designer, and graffiti artist based in Qatar, is perhaps the