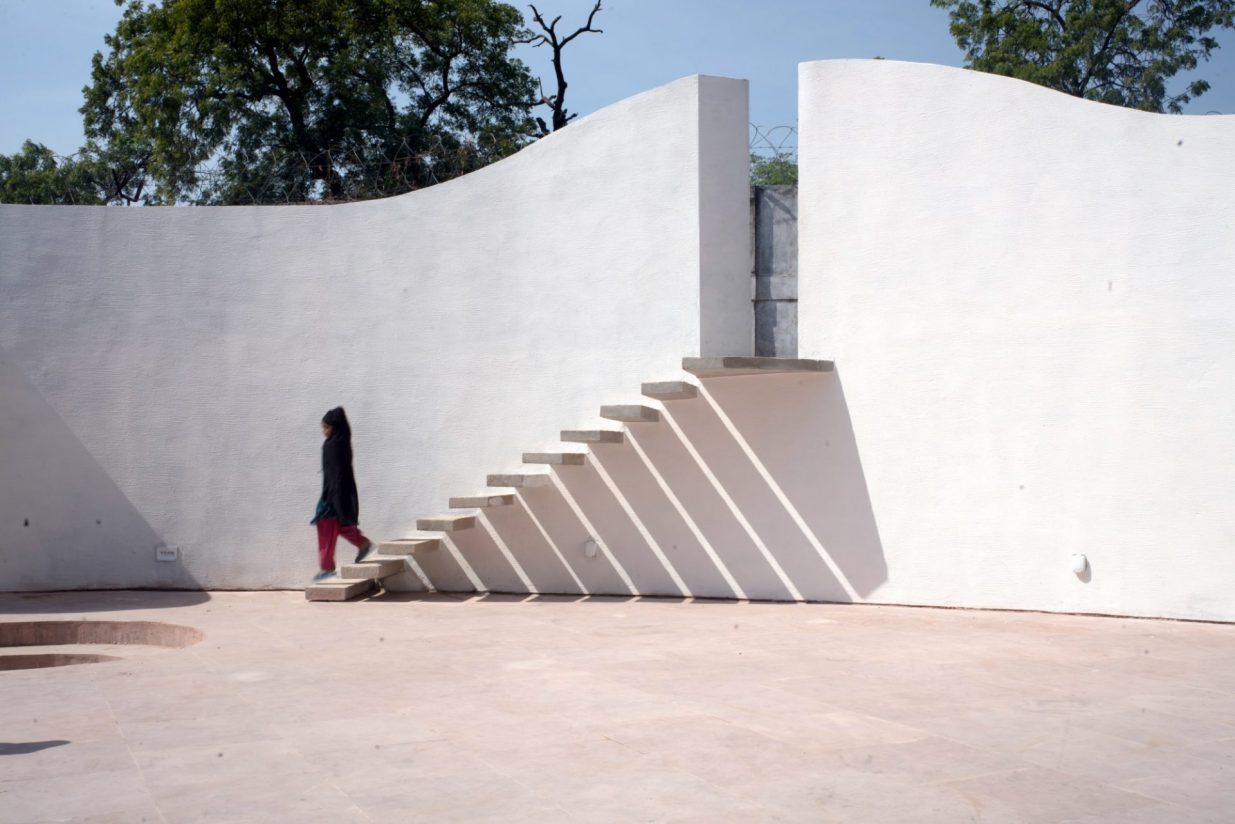 A Wall With an Intention

A single wall with a simple curve and slight level differences makes the perfect unassuming insert of a new structure within the history-rich surrounding. Jai Jagat Theatre, built by SEALAB – an architectural firm based in Ahmedabad – headed by Anand Sonecha resonates with the various layers of contextual ideology while being functionally accurate. By Naomi Mathew Vettath

The Sabarmati Ashram along with its community, established by Gandhiji in 1917 still emanates the Gandhian principles of Satya, Ahimsa, Sarvodaya and Satyagraha translated truth, non-violence, the welfare of all, and peaceful protest. A short drive from the bustling Ahmedabad city centre will transport you to a place that will encourage you to take in the small things of life. A neighbourhood clothed in trees, with playful squirrels, monkeys, dogs, pigeons, and the not-so-occasional sighting of peacocks and peahens, this place will make you wonder how it stays so pure and humble. A place of truth, coexistence and peace. 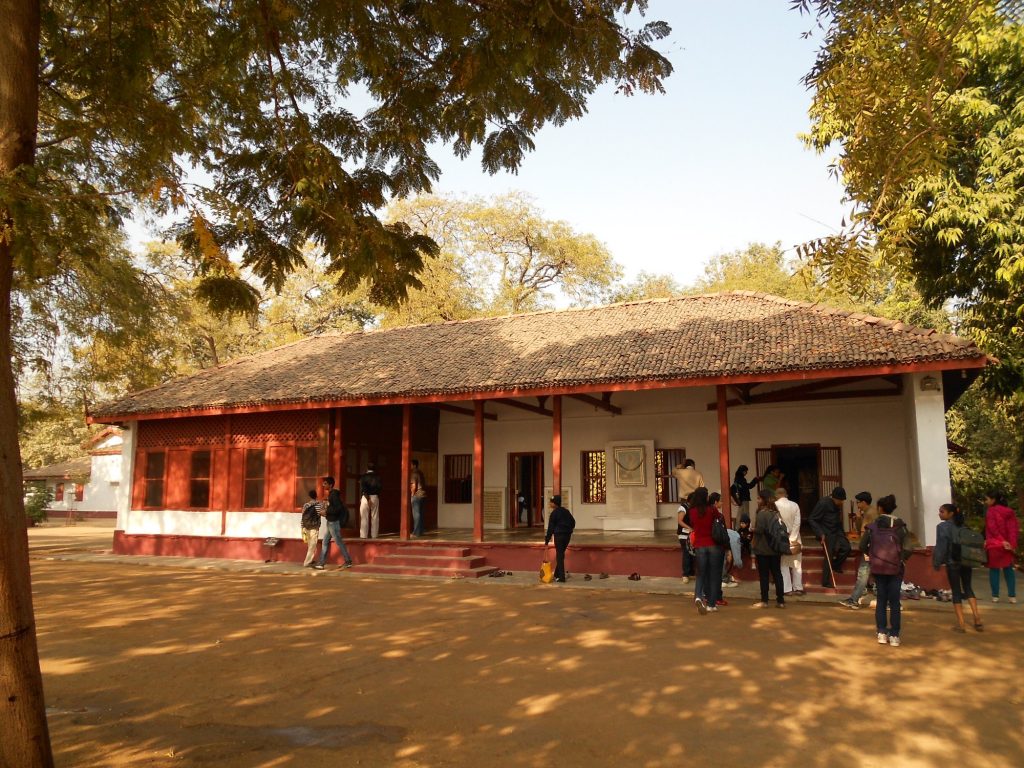 Sabarmati Ashram (also known as Gandhi Ashram) is located in the Sabarmati suburb of Ahmedabad, Gujarat.

There are around 1,500 students who live and study at the Ashram, where Gandhiji’s strong vision on education – development of mind, body, and spirit – is being practiced. Jai Jagat Theatre was conceived as a gift to these children and the neighbouring communities who previously lacked a place for special events and practice for performing arts. The theatre was built in 2017 as a centenary celebration of the Ashram. Though it functions predominantly as a theatre space, its ability to resonate with human movements and emotions makes it much more than just a space for the children to practice their performance skills. 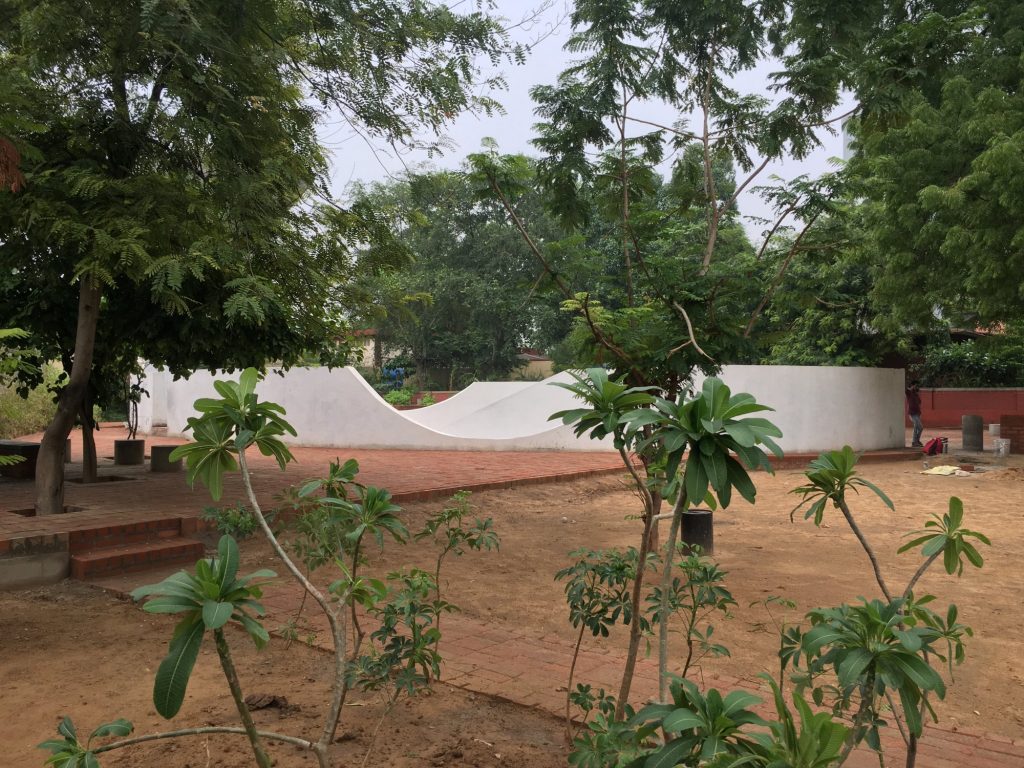 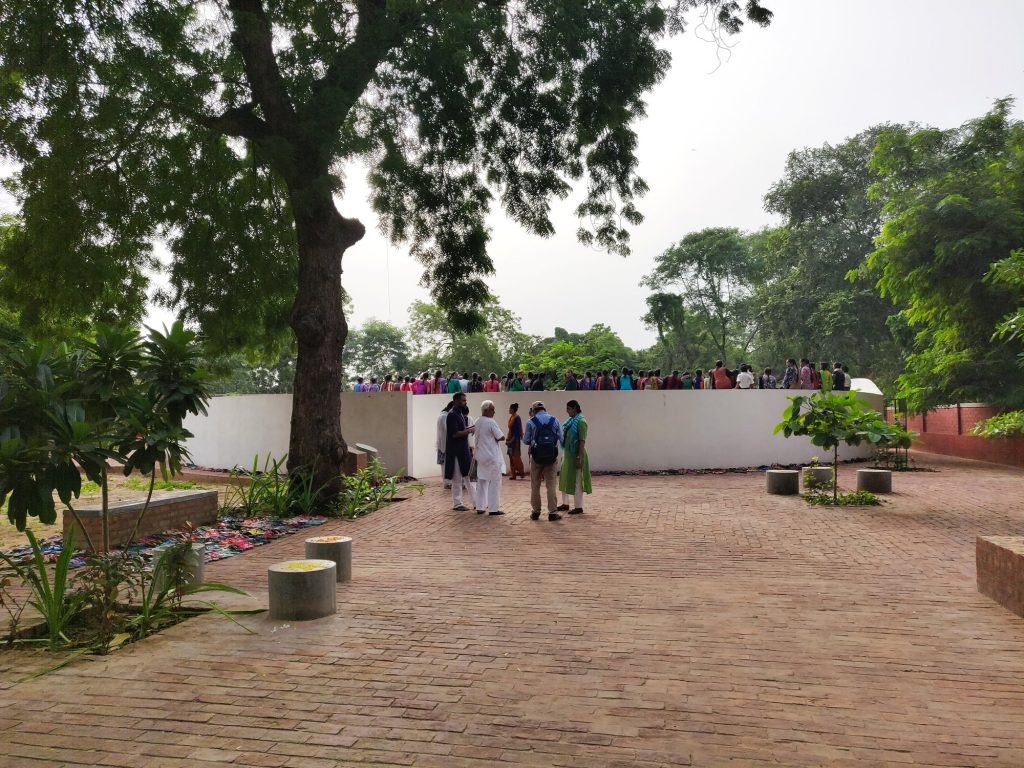 The site is marked by large old neem trees, and simple grounded structures – a primary school, Bal mandir (Madame Montessori school), teachers training college and a central kitchen. All common open spaces portray a humble and honest approach to design with the use of robust materials, clean simple design language, and a principle of coexistence with nature. Nestled within these, in a silent corner invisible from the entrance, the theatre aimed at preserving and complementing the character of the space. A peaceful walk on the meandering brick pathway, interrupted only by scurrying squirrels or sightings of magnificent peacocks, sets the mood for serene observation and introspection. 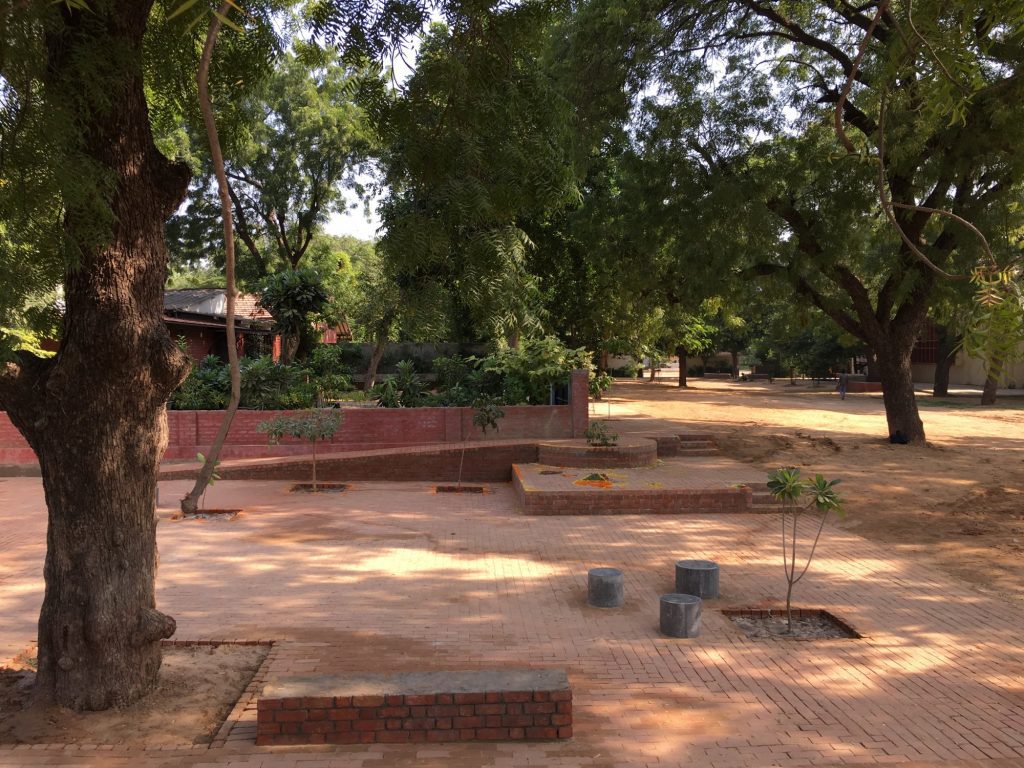 “There were four conditions put forward that triggered the design,” says Anand Sonecha, explaining the design process for the Jai Jagat Theatre, “First was that the Theatre should be simple and playful so that children would not be intimidated by it and will use it to perform and play; the second was that the environment should not be disturbed much, there were many trees that dominated the area and their importance in the design was vital; the third factor was that the structure should look as if it was always there; and lastly that the theatre should be for 300 to 350 people.”

And all the architects asked was for time; to iterate, study, understand the surroundings, and start the construction process only when the process was complete. 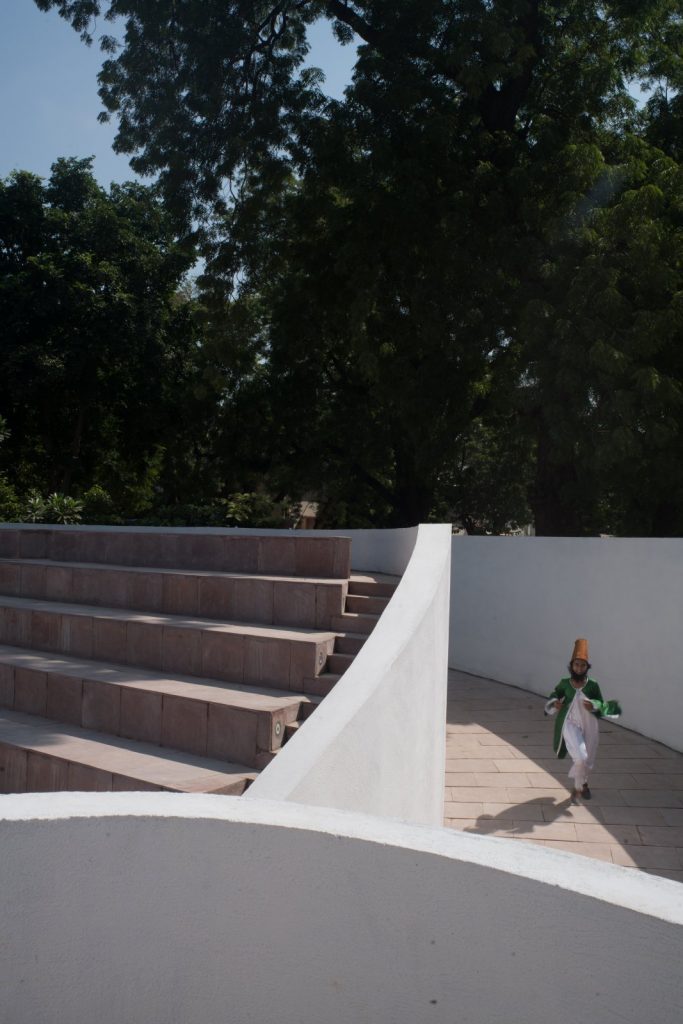 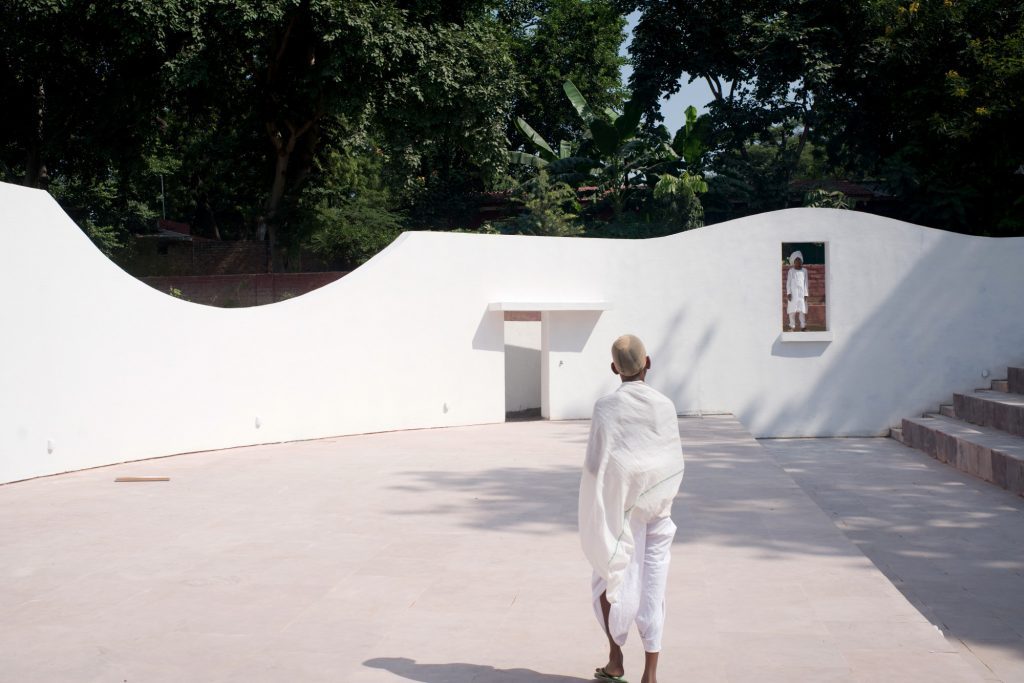 Following the pathway leads to a large open gathering space marked by a tall neem tree where the theatre reveals itself. A human-scaled slightly curved white wall intrigues curiosity and silently beckons. Following intuition, and walking towards the wall will lead to a narrow spiral ramp that shifts the ground level and unveils a partially sunken space caressed by the white wall. Once transported to the heart of the theatre, it slowly lowers its guards and completely lays itself bare – the sunken sanctum – a simple and elegant composition of spaces essential to a theatre: the seats of the amphitheatre, the stage, the ‘Juliet balcony’ with cantilevered steps. The white wall is now a backdrop to all the quiet drama that has unfolded. The undulating silhouette of the wall with calculated punctures provides a visual and emotional connection to the immediate context of the serene natural beauty. The theatre comes alive when it is occupied with people – when the stage is lit and its seats are full. It emulates playfulness while encouraging communication and finding solitude. 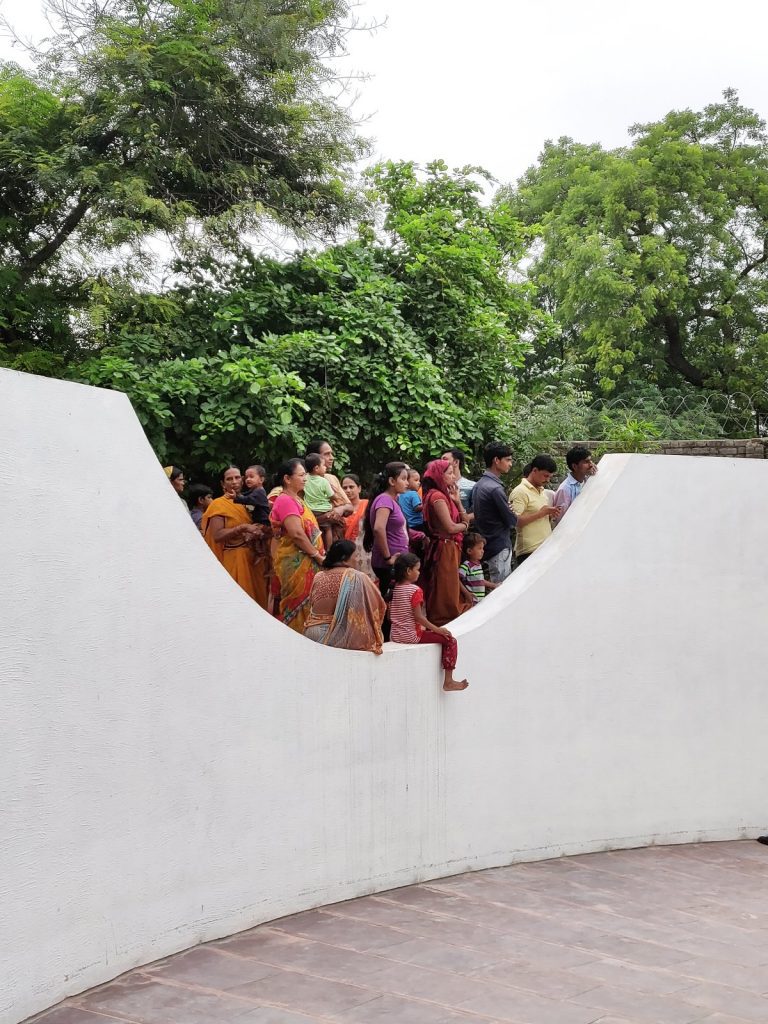 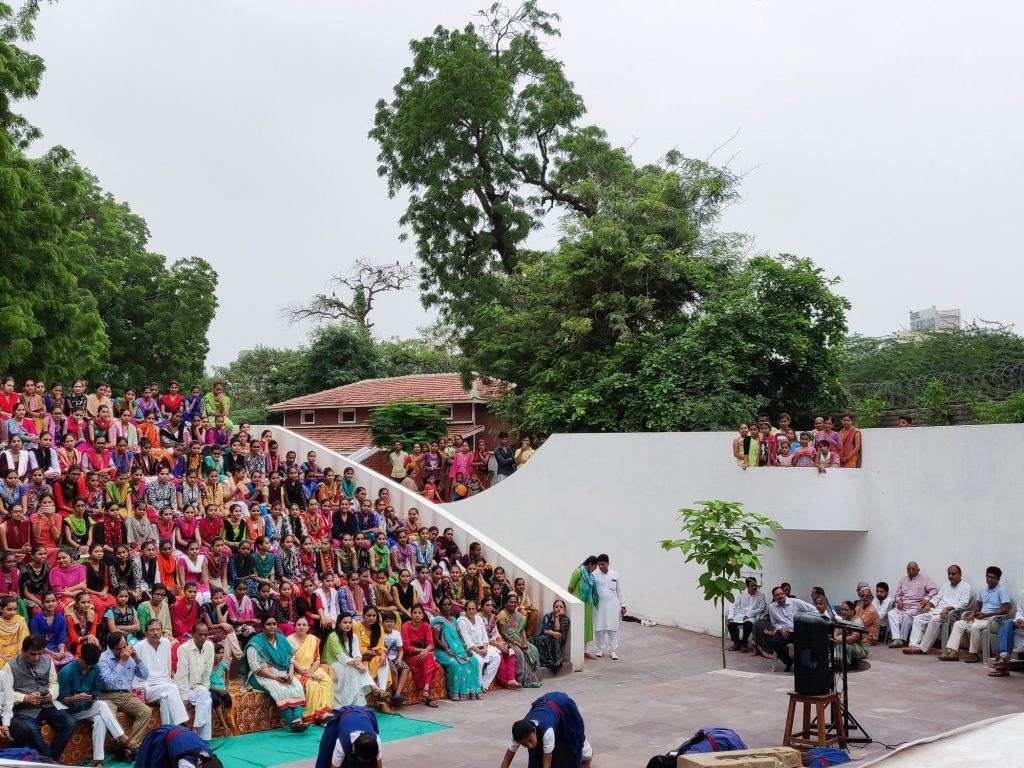 The versatility of the theatre is manifested by the layered and stepped motions of the circular plan creating a perfect balance of association and dissociation with its immediate context. The modest scale of the white walls and thoughtful articulation of curves and levels emotionally equips and encourages the children who perform there. Utilising its position as the lowest area of the site, a 70,000-litre water tank below the stage collects monsoon water which is reused to irrigate the many indigenous trees around it.

From the words of the architect, “it is a place for expression. It is a landmark for an education that is an all-around drawing of the best in child and man, in body, mind, and spirit.”

A physical ode to the Gandhian principles, values, and philosophy. 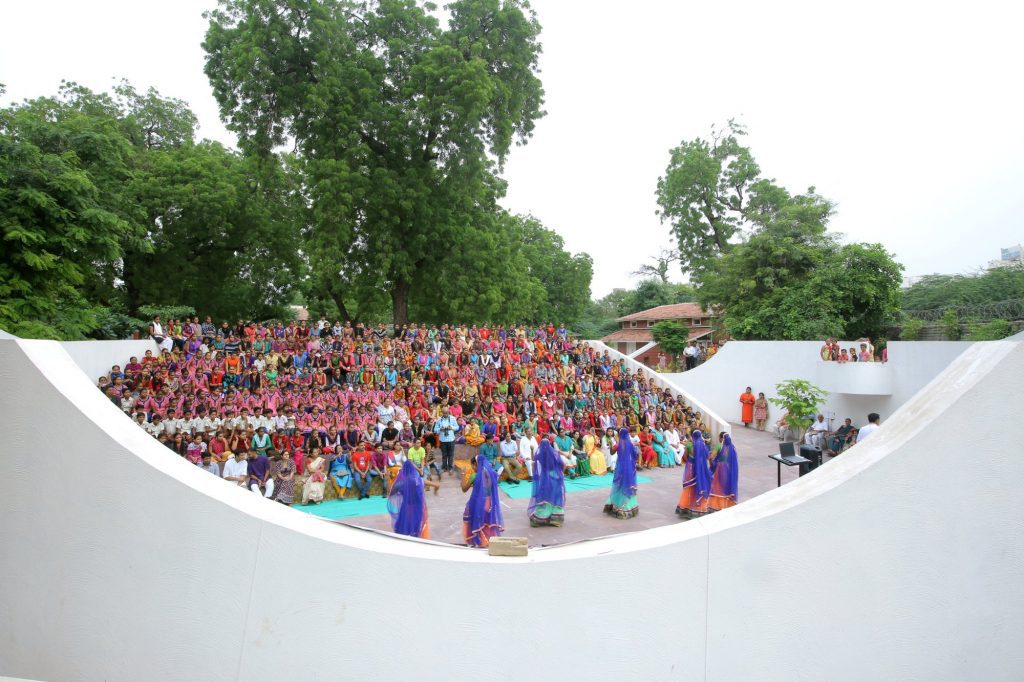 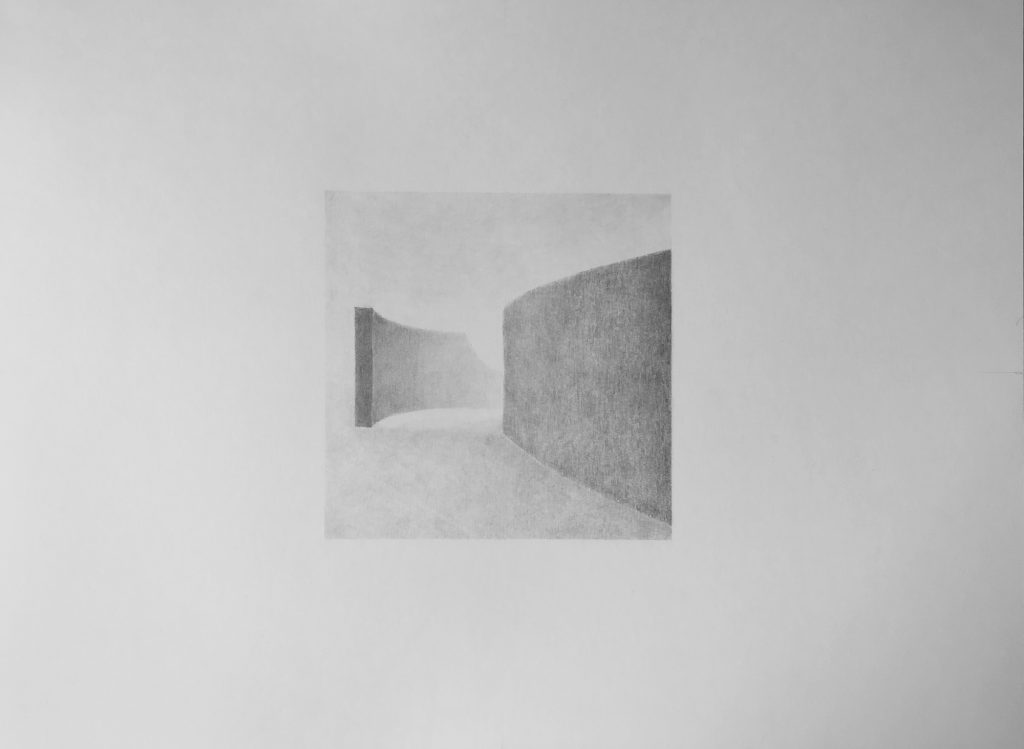 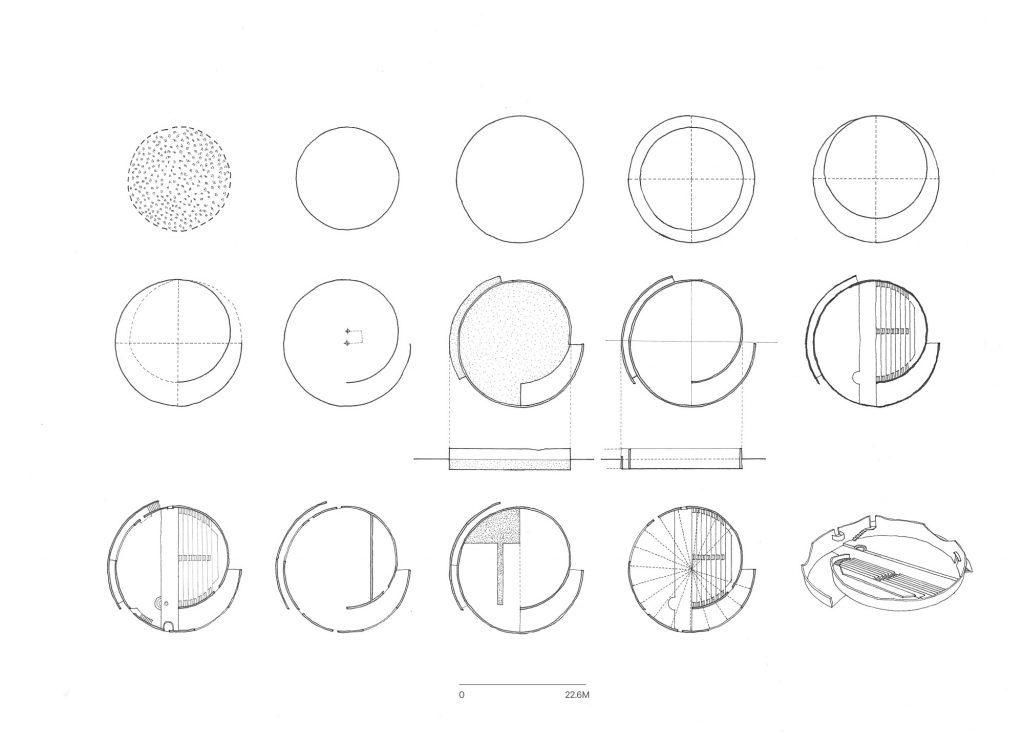 All Images and Details Courtesy SEALAB 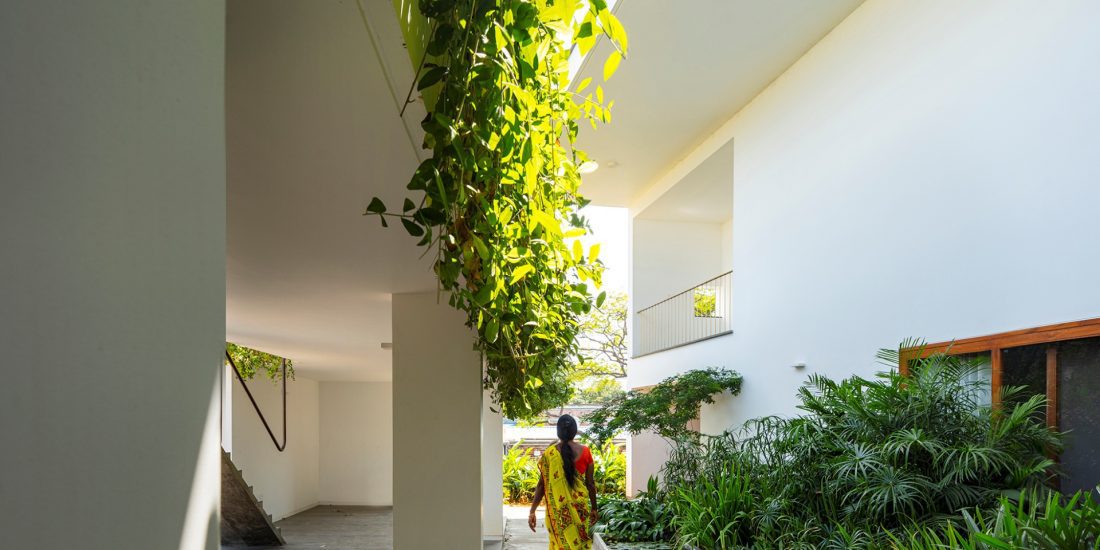 Mahesh Radhakrishnan, the principal architect of MOAD – The Madras Office for Architects and Designers, is known 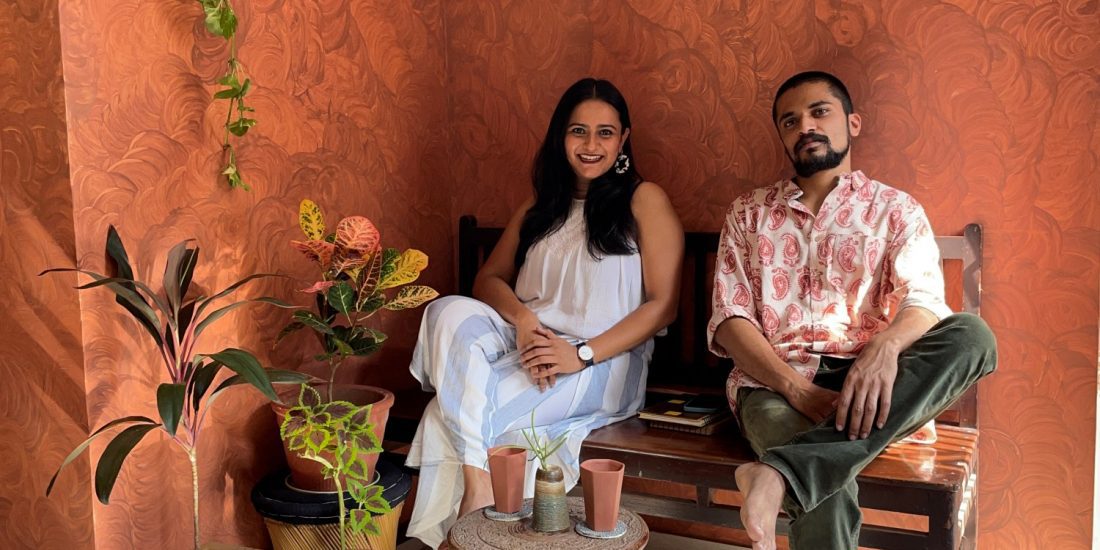