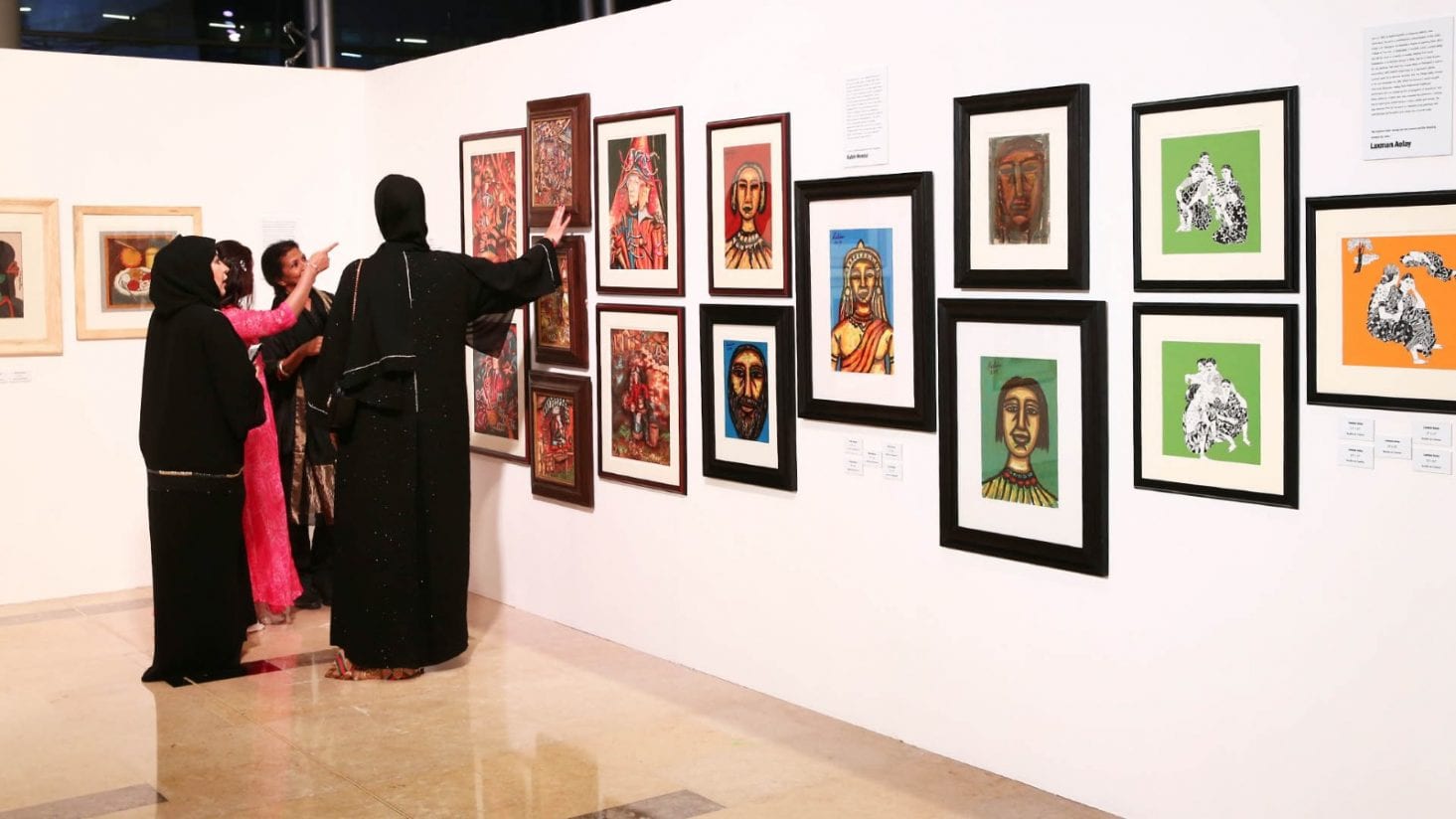 The Love for Art

Fanqaar, which was launched in mid-April, is an art gallery with a range of works from Indian artists. It is the product of the passion of an insatiable art collector and long-time Doha-resident Sujata Varma. By Sindhu Nair

Sujata Varma’s love for art is infectious. By the end of our conversation, I am enthralled by the ethnicity of Thota Vaikuntam’s work, in love with H.R. Das’s homely Nandi’s, impressed by Milburn Cherian’s complexity on canvas and connected to the reality of the work of Anjaneyulu Gundu. I feel associated with the names and the artist behind the work through Sujata’s passion for them and my brief interaction with some of the most charming artists whose works are on display at Fanqaar. 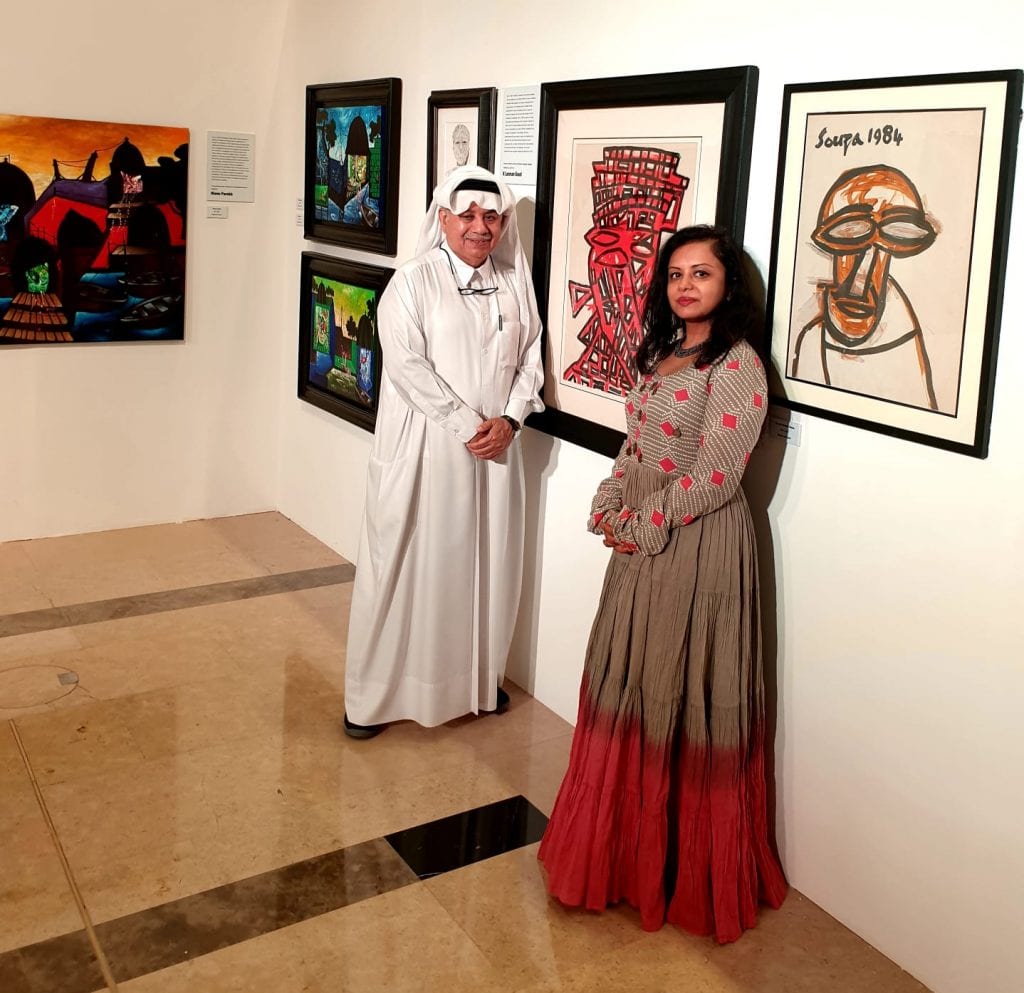 Fanqaar by Vistas is the fruit of a passion borne since childhood for banker Sujata, who is “married to the bank” and comes back home to a collection of art that helps her unwind from the world of banking.

“My parents exposed me to art from an early age. They were not art collectors, but they introduced me to the world of artists like Jamini Roy. Then it was more about curiosity, of going to galleries and finding out about the art and artist. I did not realise that it would later become such an integral part of me,” remembers Sujata, trying to figure out if there was a moment or artist who has influenced her love for art, “There was an artist called Jaya Wheaton, with whom I had a one-on-one interaction. She was a Jaipur-based artist who was inspired by the Pink city and her paintings were resplendent with sandstone palaces and long-established traditions.”

“She was a big name in the 80s and 90s and because my aunt knew her, I came in close contact with her and since then it has always been my ambition to own one of her paintings,” reminisces Sujata. 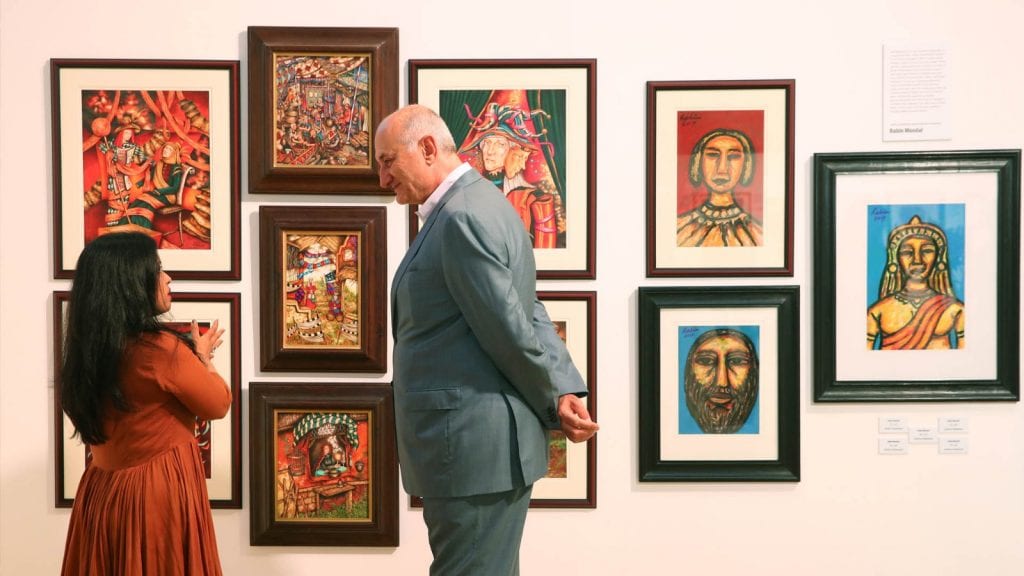 That artist interaction paved way for Sujata’s very first acquisition, part of her vast collection, in 2003, when she came to live and work in Qatar.

“The taste moved from decorative to figurative art, to Vaikuntam’s work, to Badri Narayan’s paintings and I am still searching for my first love, a Jamini Roy,” says Sujata.

Art naturally took on a massive part of Sujata’s life, she nurtured her art like her children, growing over time and age, collecting them whenever she went to India.

Ahmedabad has also had a major influence on the life of this art collector, who completed her education in that city. Ahmedabad with its famous campuses of creativity; NIFT, School of Architecture and the Ahmdabadni Gufa, an underground art gallery designed by the architect B.V. Doshi, which exhibits works of the Indian artist Maqbool Fida Husain, played a part in shaping her sensibilities. 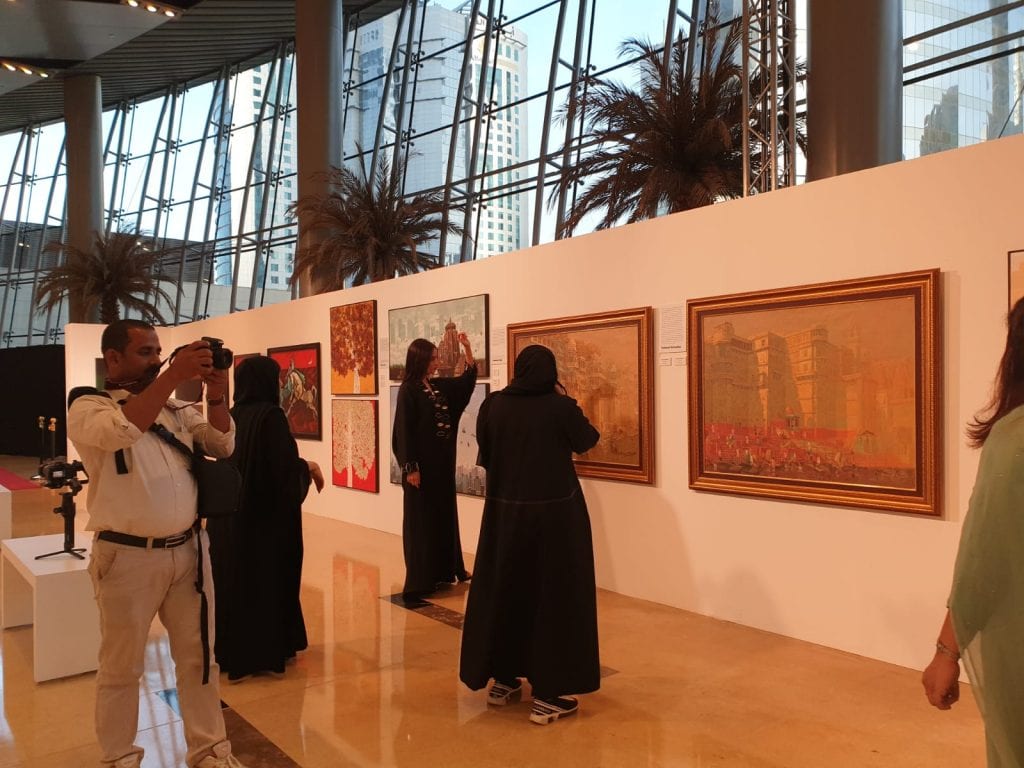 But Sujata is not limiting her love of art to the Indian art, she stresses. “After coming to Qatar, I have been exposed to Arab art and I also own a Moza Al Kuwari and Yousef Ahmed. I am a huge fan of Yousef Ahmed, his work and his personality because he is one of the most engaging and loving personalities in art in the Qatari art scene,” she says.

Sujata’s acquisitions range from the famed works of well-known “names” in the art field to the works of lesser-known artists. She buys street art and some of them, she says, “is even more beautiful than any other work of art that I have bought.”

She calls her collection, eclectic. “my choice is all over the place, based on my love for a certain piece rather than the name tag associated with it,” she says. 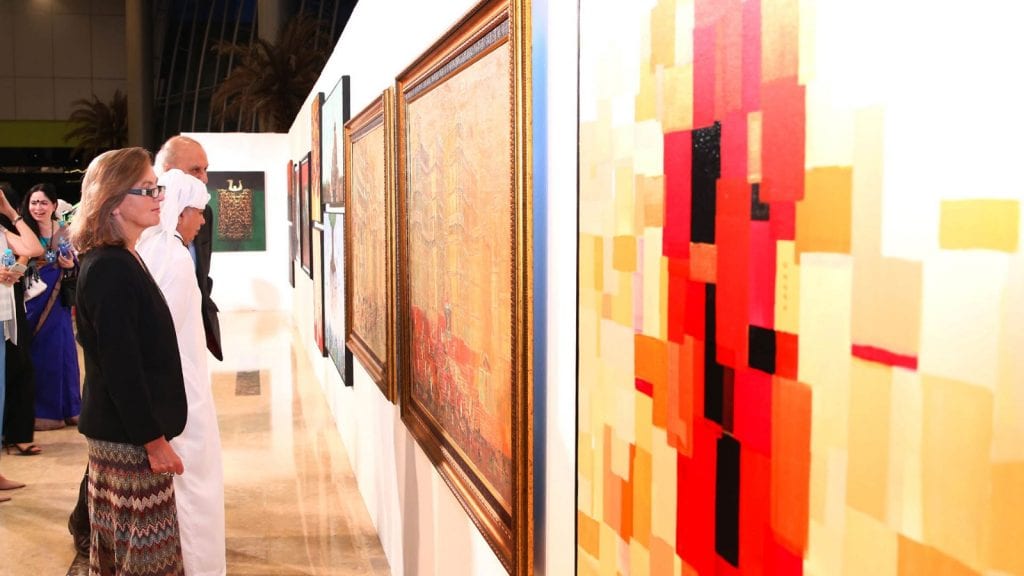 “I have a lot of paintings that are not by any famous artists. I have a Sangeeta Thukral, it is a brilliant work but she is not as famous as the other names.”

The Art and the Artists

Fanqaar which opened with a stellar attendance on April 16 at the Gate/Salaam Mall brought together some of the artists whose work were at display and it was a revelation for all the guests to interact with such influencers in the Indian art scene on one platform. It was the culmination of work and research of more than a year for Sujata and the team behind Vistaas, and it was timed to be launched during the Qatar India Year of Culture, by the Qatar Museums and was patronised by the Indian Ambassador, P. Kumaran. Fanqaar, opened with around 70 works of art by 22 Indian artists. 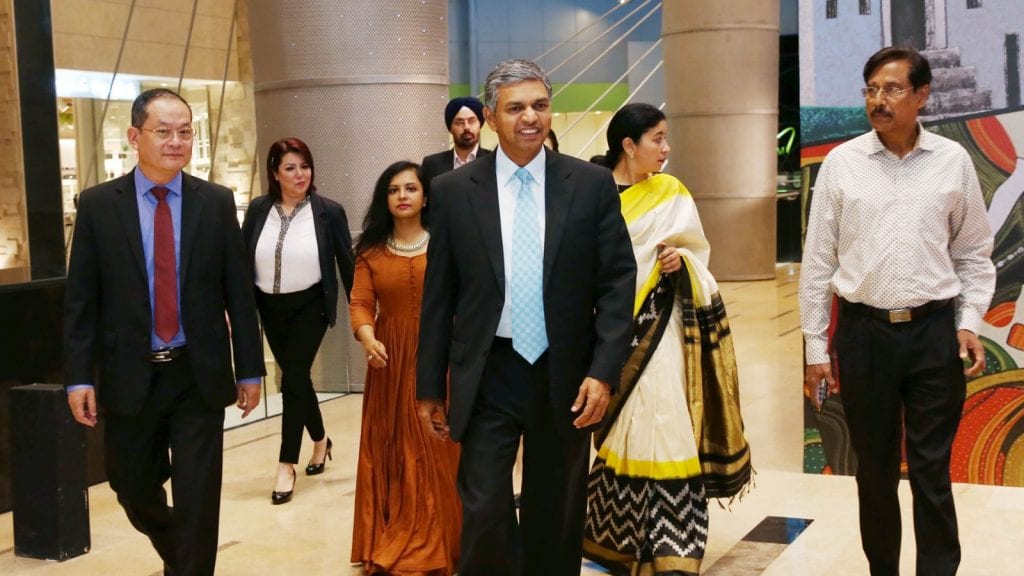 Indian Ambassador to Qatar, P Kumaran at the launch of Fanqaar

Milburn Cherian, whose work seems to transcend the categorisation of “Indian art” and moves to a more global perspective with her strokes and background effects, is one of the most down-to-earth artists I have ever met in my life.

She tells me, “I don’t know and don’t follow the work of any famous artists. I come to know of them at the exhibitions. I am a self-taught artist, I tried following the work of Flemish artist and I am constantly teaching myself techniques to improve my work.” 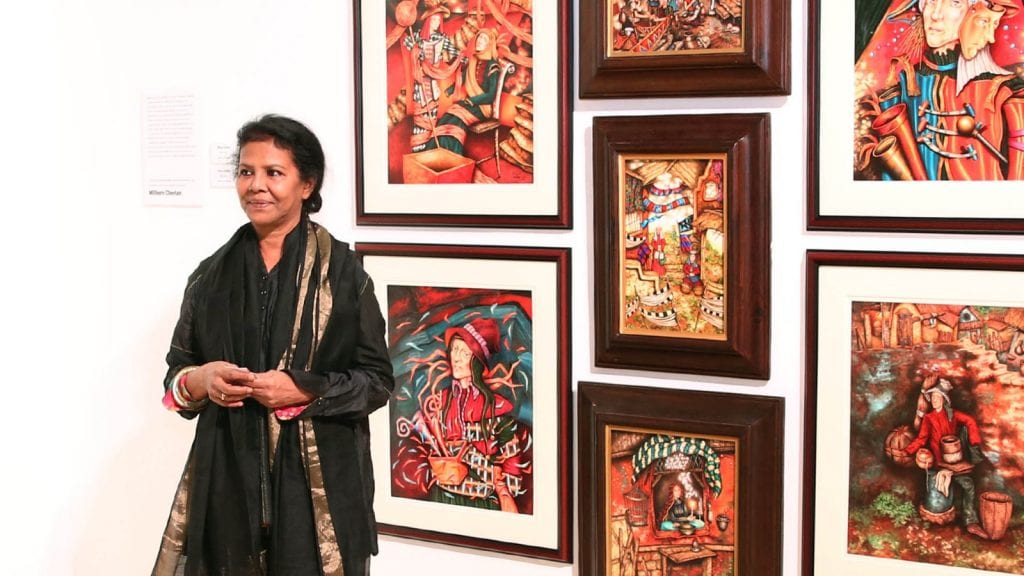 “Most of my work is with galleries,” says Milburn. “I have never had to market my work much; I have been really lucky and all my work have sold as soon as they were done. I think people identified with my work as it gave them an insight into the old world.”

“My paintings are mostly about the pain and suffering in the world. I try to camouflage the pain with colours. I tend to move from surreal to distorted figures in my paintings,” she says.

“The people here are so excited about art and I am so impressed with the art that is on display here,” says Milburn.

H.R. Das, whose work is said to evoke the beast within says his work has changed over time. His works exude the power, pride, and heart of the beast that is a part of each one of us as he captures the essence of village life through his amazing cattle. 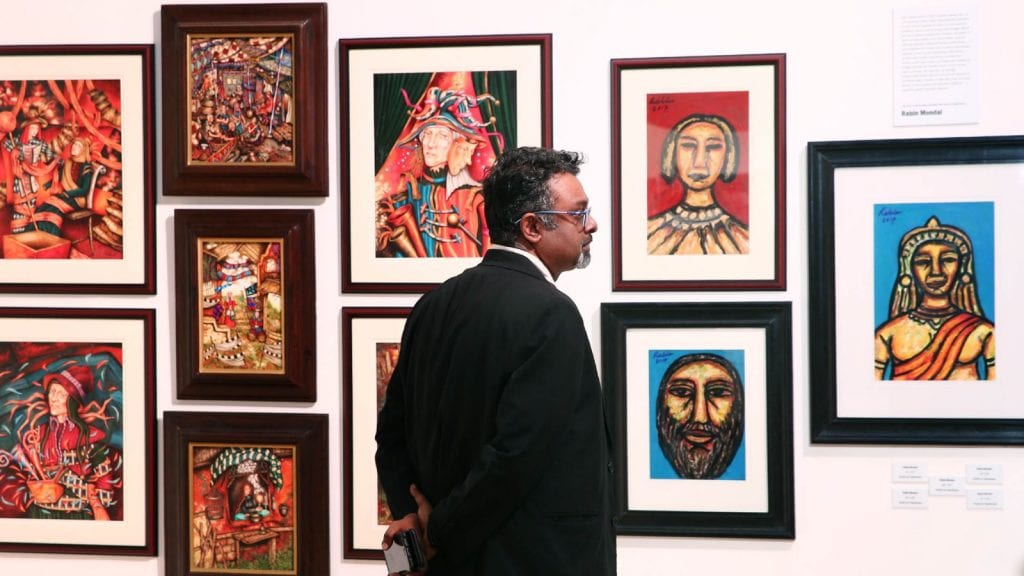 His bulls and cows don’t just exist but pulsate with energy. But to me, as they are to Sujata, they express a feeling of togetherness and family. “The family setting is part of my artwork and my female beast is now the centre of power as it is in my family,” he jokes.

Anjaneyulu Gundu’s work was attracting a lot of interest at Fanqaar, with many selfies taken with it. Known as the hyper-realist, Anjaneyulu says, “I use a new technique and I interpret how I see things. I work on the things that we find in the lives of a middle-class person in India.” He says the Indian art scene is at the most vibrant. 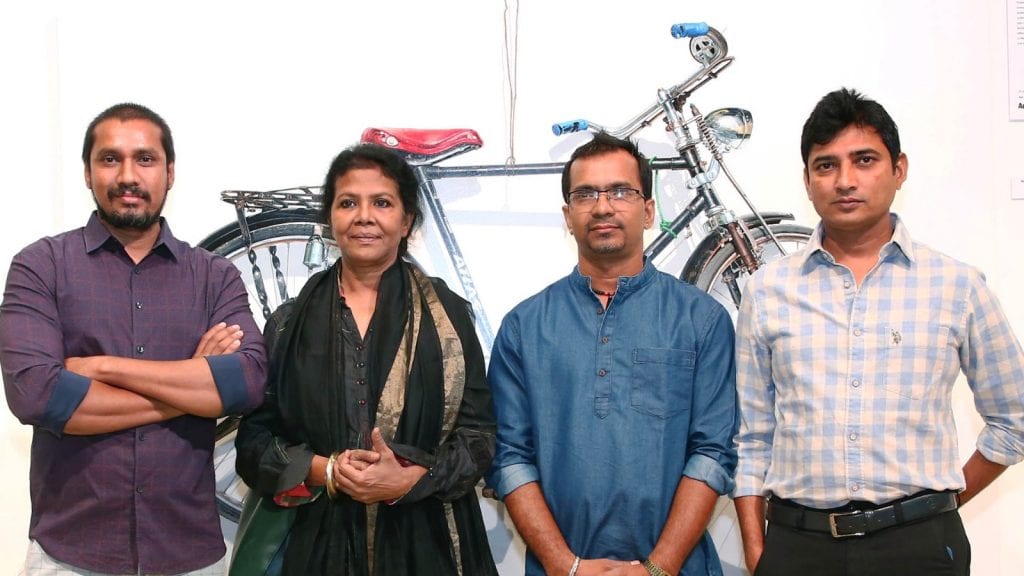 Ramesh Gorjala, whose work is my personal favourite, likes to focus on mythology, through sensitive and detailed portrayals of various Indian gods and goddesses. With intricate lines and use of colours he is able to create and convey an antiquated yet contemporary dynamic to his work.

Fanqaar and its Future

Sujata has been following the art scene in Doha and has always been a fan of what is happening in the Museums space, but she realised that there was a gap in acquiring works that she was familiar with. “I have seen how the great names in contemporary art world like Anish Kapoor and Suboodh Gupta did have a presence in Doha but acquiring work of the artist I was familiar with or artist that the Indian art world is known for was a hassle in Doha and that led to the ideation of Fanqaar,” she says. 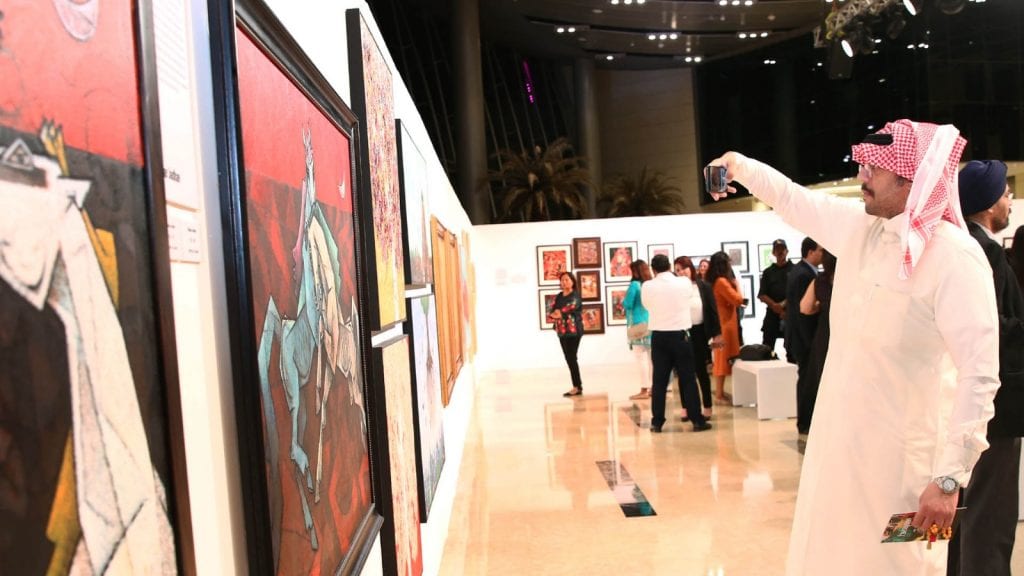 Sujata conducted a survey to understand the market for such an art consortium in Doha and was encouraged with the enthusiasm and a gap in the market for a gallery that brought the work of Indian artists.

“Fanqaar as of now is about the 22 artists but it will keep changing as and when I bring in more artists. It is about having a space to walk into and appreciate and acquire art at its finest. The platform at the Gate Mall is an ongoing one. My next work will be a culmination of the work of Qatari artists and other regional artists. Fanqaar is about art and art is global,” says Sujata.