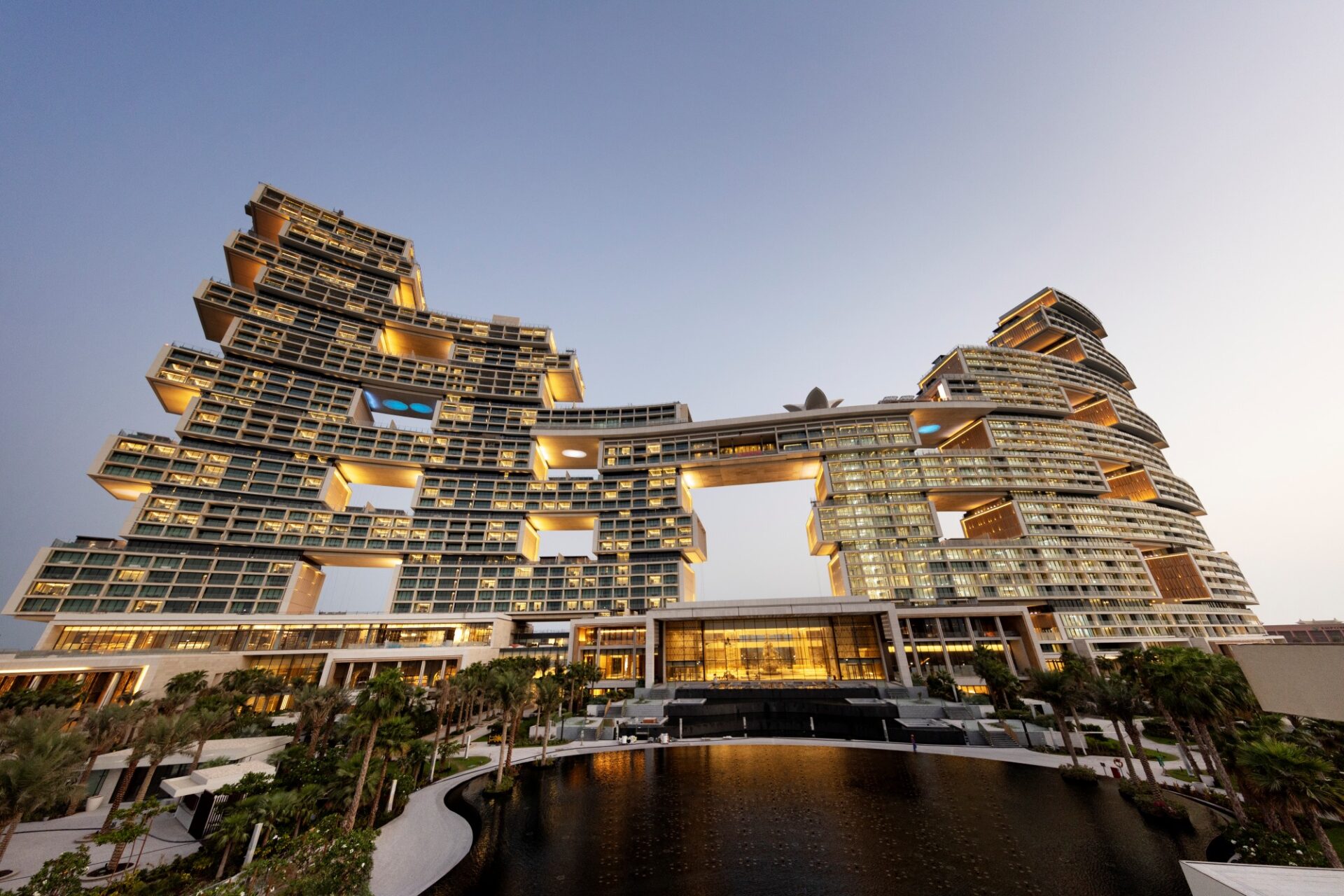 Atlantis The Royal Takes a Step over The Palm

Adjacent the Atlantis The Palm, Atlantis The Royal an innovative symbolisation of luxury resort life is brought to life in Dubai. Distinctive in its design and architecture, The Royal with its 500-metre-long, 178-metre-tall structure, uses a sweeping stacking method to bring its architecture to life, a departure from the towering, traditional glass towers of Dubai. 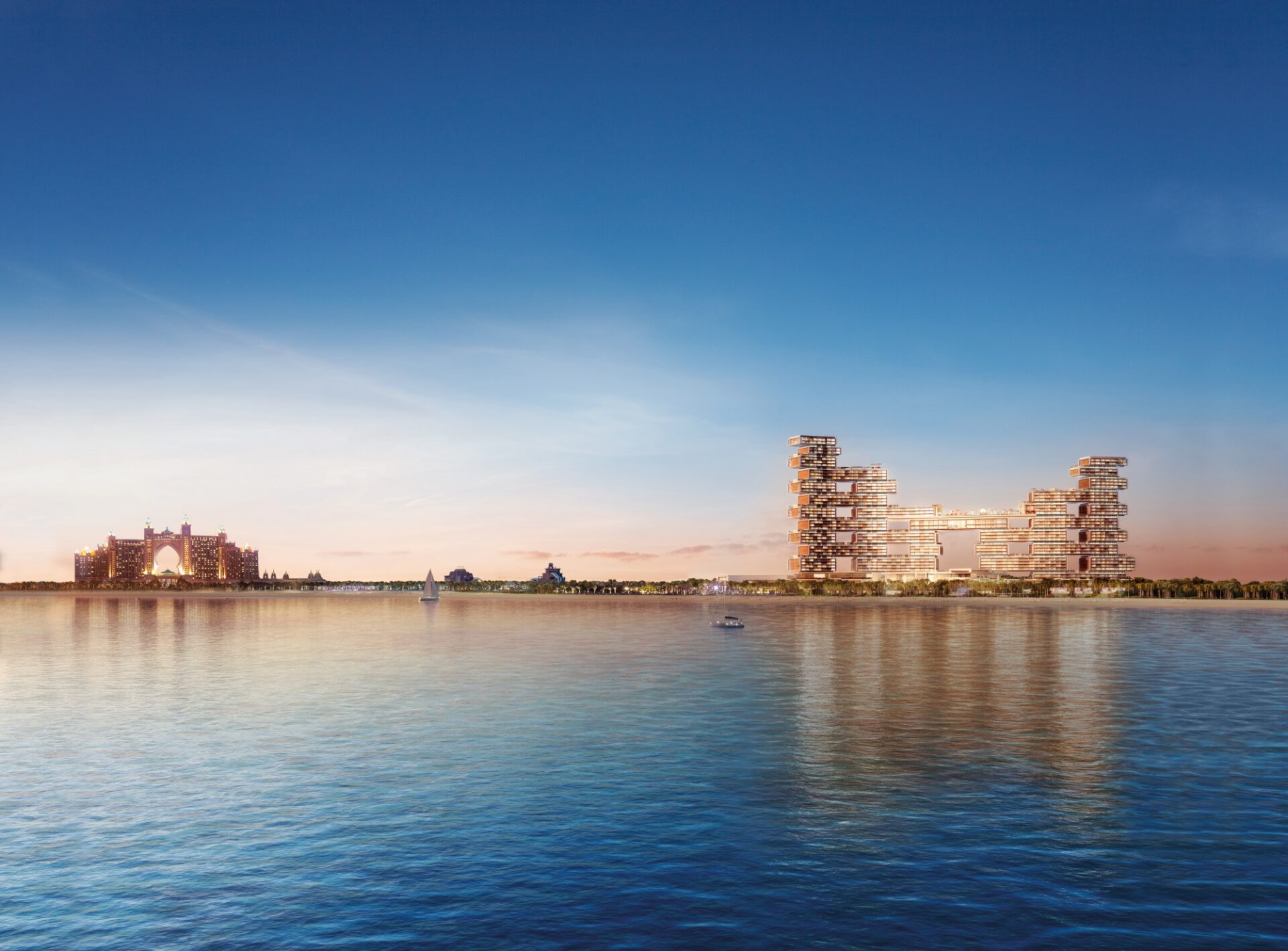 Atlantis The Palm and The Royal in one frame.

Atlantis The Royal was conceptualised as a ‘deconstruction’ of the traditional sculptural towers associated with Dubai, taking the form of a stack of individual blocks, each offering a private experience from a single core. The individual series of blocks enhances the convenience of luxury and amenities for residents and guests, in what seemingly feels like a smaller and more intimate setting. The gaps between the stacks become outdoor courts, making each stack completely naturally ventilated and shaded, with incredible views over Dubai and the Gulf.

Located on Dubai’s Palm Jumeirah Island, the emirate’s premier resort destination, Atlantis The Royal complements the existing Atlantis, The Palm, itself one of the city’s iconic buildings. Together, the two form a resort precinct and entertainment destination.

The design of Atlantis The Royal was the result of a design competition commissioned by Kerzner International, operators of the Atlantis brands. The design brief for the architects was simple; to create the most memorable building in the city. And the architects chosen for the development was Kohn Pedersen Fox Associates who have designed the Abu Dhabi airport design and are committed to buildings that make contributions to the built environment that go beyond their physical footprint. The result is a luxurious, modern, and refined development that integrates 406,000 square metres of built-up area spanning six towers that are adjoined by a sky bridge, 90 metres in length. 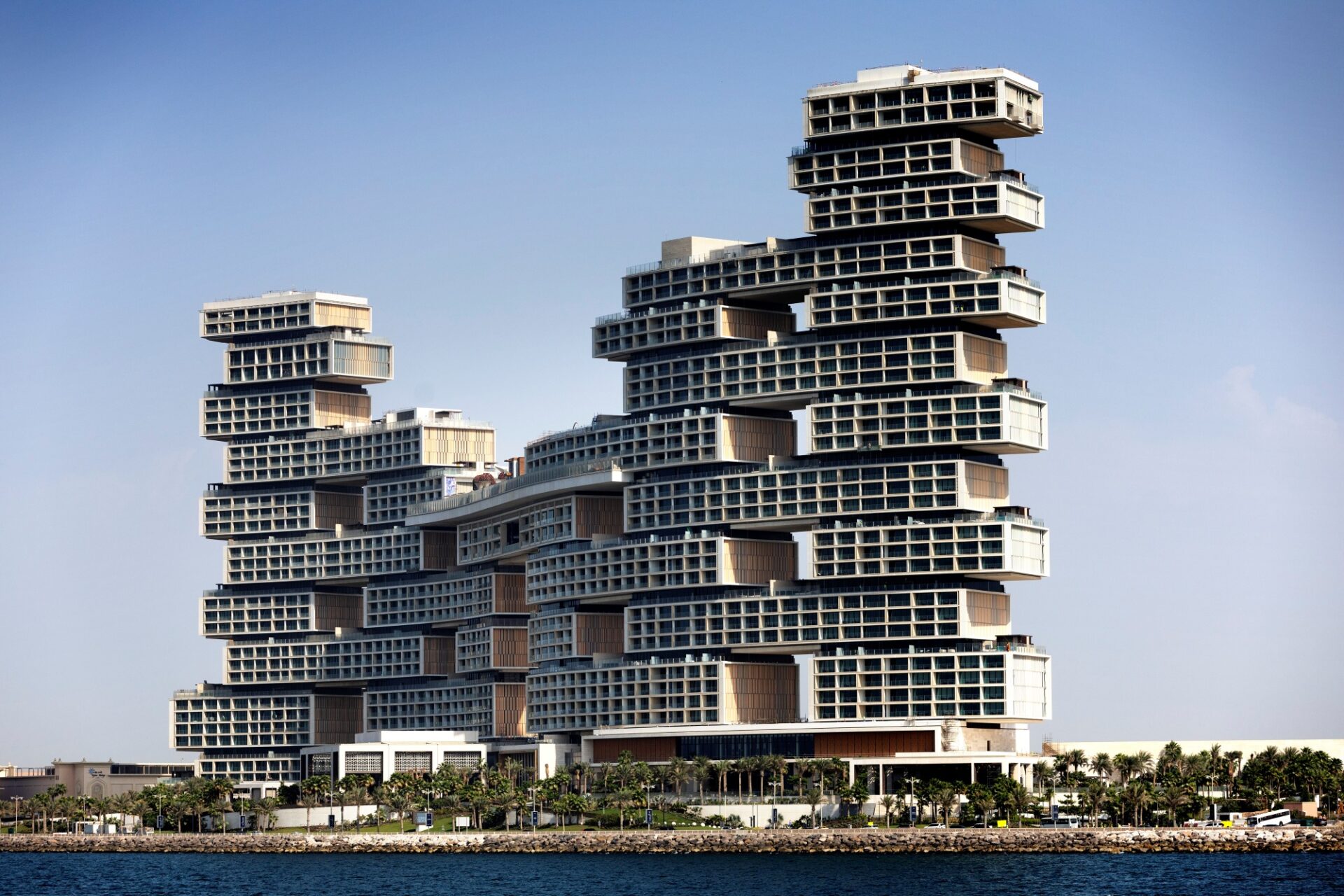 “We were asked to dream big on this project. To create something unique and iconic for Dubai—and when I look at it now, I’m amazed by the audacity of the whole undertaking. I’m bowled over by what’s been built. The gardens in the sky, first imagined in sketches on paper, are now realized hundreds of feet above the ground,” says James von Klemperer, President and Design Principal, Kohn Pedersen Fox Associate.

The luxury hotel was designed as a sweeping stack of massive blocks, resembling a monumental wall of bricks. Together, these stacks form six interconnected towers with an impressive sky-bridge at the 22nd  floor, where an infinity pool stretches 295 feet (90 meters) alongside an ‘entertainment experience’ dubbed Cloud 22. This rooftop nightlife venue hosts a swim-up bar, a vaulted DJ booth, and a collection of VIP cabanas.The resort hotel‘s most prized rooms are the 44 luxury suites and penthouses, each with its own private infinity pool. 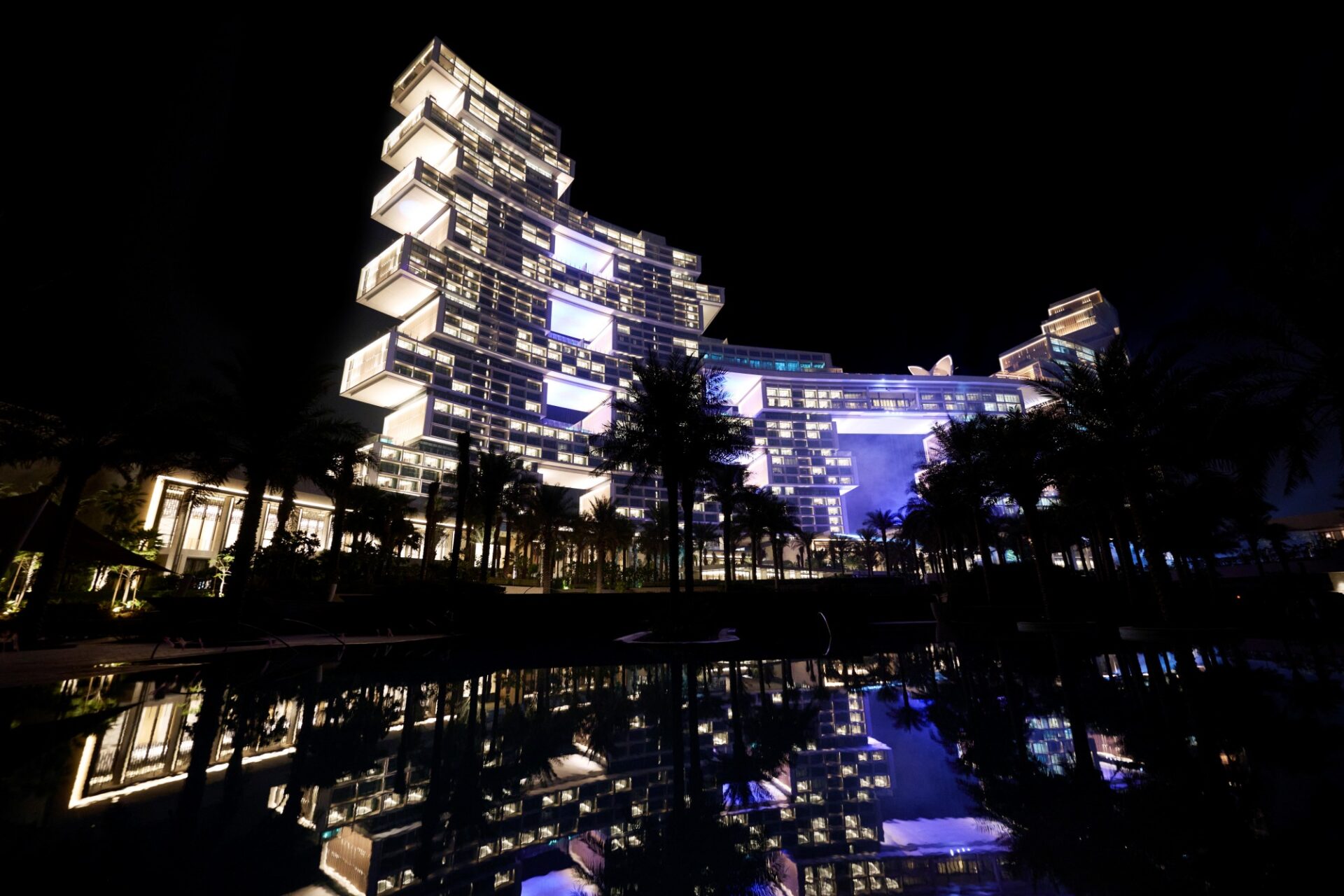 The curved façade and porous hollows within Atlantis The Royal were created in response to where the building sits. Positioned on the outer crescent of The Palm, this location allows the building to have two different types of waterfront views: towards the Arabian Gulf or the sheltered lagoon of the Palm Island and the Dubai skyline. The structure enables guests to take advantage of the views on both sides, many times from the same room or location.

The architect reimagined the conventional concept of the ‘iconic tower’ and its role in the skyline of the rapidly growing city. Rather than focusing on form, the building centres on extending the idea of indoor-outdoor living. This idea is transcended vertically into a 500-metre-long, 178-metre-tall mega structure, operating as a permeable screen porous to people, light, and air. 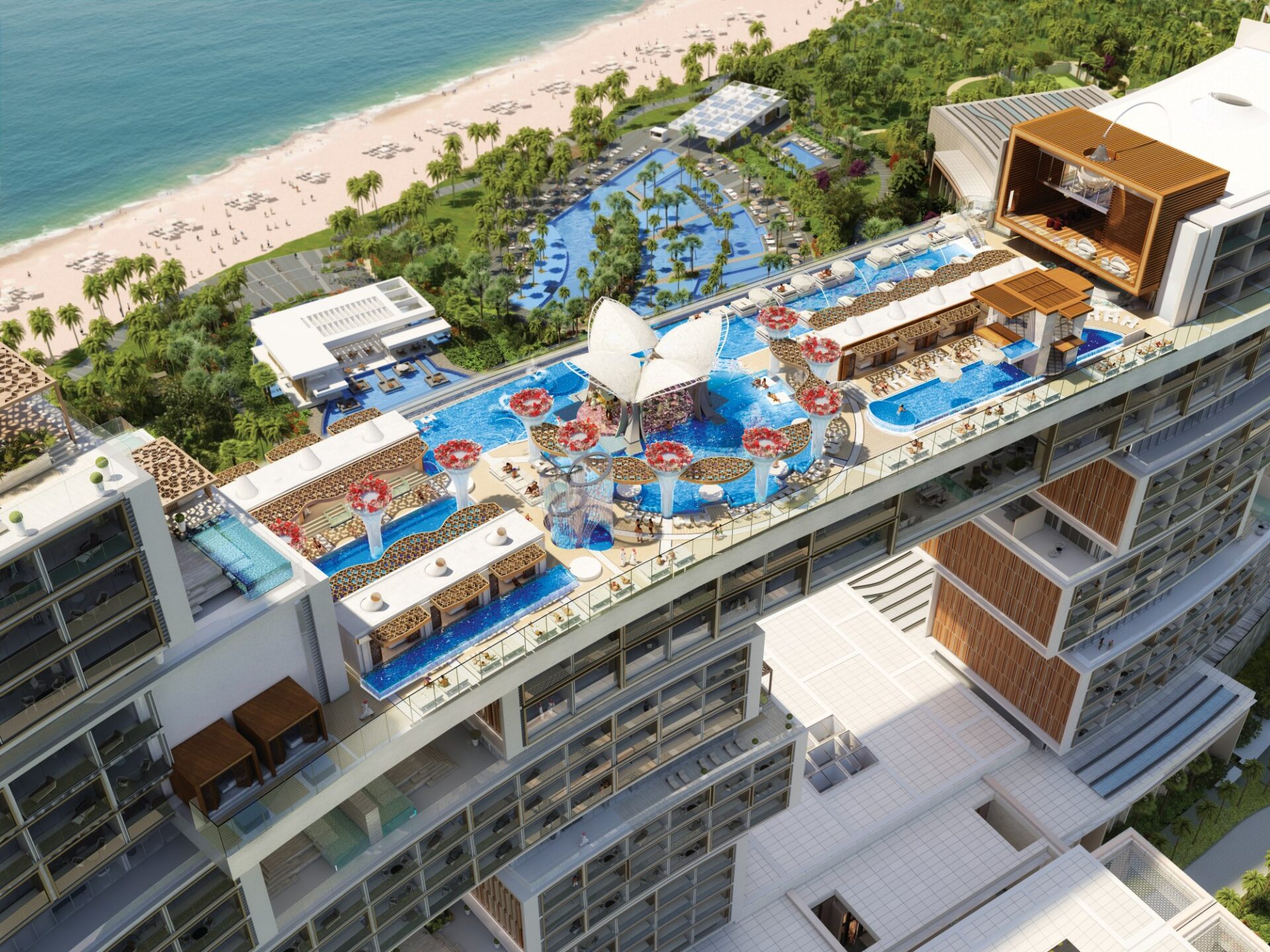 “There was almost a performance goal to our brief; an expectation ‘to blow the client out of the water’ and create a show- stopper of a building that would deliver a unique set of experiences. The building has a lot to do with entertainment. It’s not just a quiet place to go and relax and eat fine food—it’s about experiencing something you never imagined could be. The architecture sets this up strongly with its vertical piling up of outdoor experiences in the pools and outside spaces,” says  von Klemperer.

The visual identity of Atlantis The Royal mediates between the classic form of the nearby Atlantis, The Palm Resort, and the progressive architecture of Dubai. The building’s mass grew out of a desire to break down the scale of the building – it is nearly ½-kilometre long and nearly ¼-kilometre high. By manipulating the slabs into a series of stacked blocks, KPF created a simple, repeating form that evokes the monumental arches and arcades of Roman aqueducts, where sun and sky are framed as part of the architecture itself. At night, the building will appear especially dramatic with the interior illumination of each of the openings, creating a clearly identifiable pattern on the night skyline. The resulting arrangement of form and void offers a fresh and new outdoor hospitality experience.

“Atlantis The Palm is a more literal quotation of architectural history. Our building is a modernist piece of architecture— yet the essential way it handles light and space, is actually very true to some beautiful traditions of the region. The way the structure acts as a sort of screen, which allows views to go both ways, could be seen to reference the screens of mosques and Islamic architecture. The building doesn’t really have a front or a back, which is unusual and this multi-directional aspect of the building is a special aspect of its design,” says von Klemperer.

The building’s two terraced towers step down towards one another to meet through the 90 metre by 33-metre-wide sky bridge, which features dramatic views of the Gulf and Dubai skyline. This 1350 metre bridge was lifted into place at a rate of 6-7metres/hour by eight hydraulic jacks via a strand jacking method and took 10 hours in total. This arch is a defining element of the Atlantis brand and has been reinterpreted for Atlantis The Royal. Atop of the arch is The Royal Mansion signature suite and the skybridge, a 90-metre-long pool deck, flanked by restaurants and lounges as well as an event space.

“One of the most memorable moments for me during the construction was when a 90-metre- long chunk of the building that spans between the two halves of the structure was hoisted up and put in place. This was an amazingly daring feat of engineering! It is going to be a very entertaining place to go, but at the same time, it is also a very serious piece of architecture. It has a longevity about it. And we hope this building will help take the city beyond the transitory, into something that feels more rooted, longer lasting—and timeless,” says the arechitect. 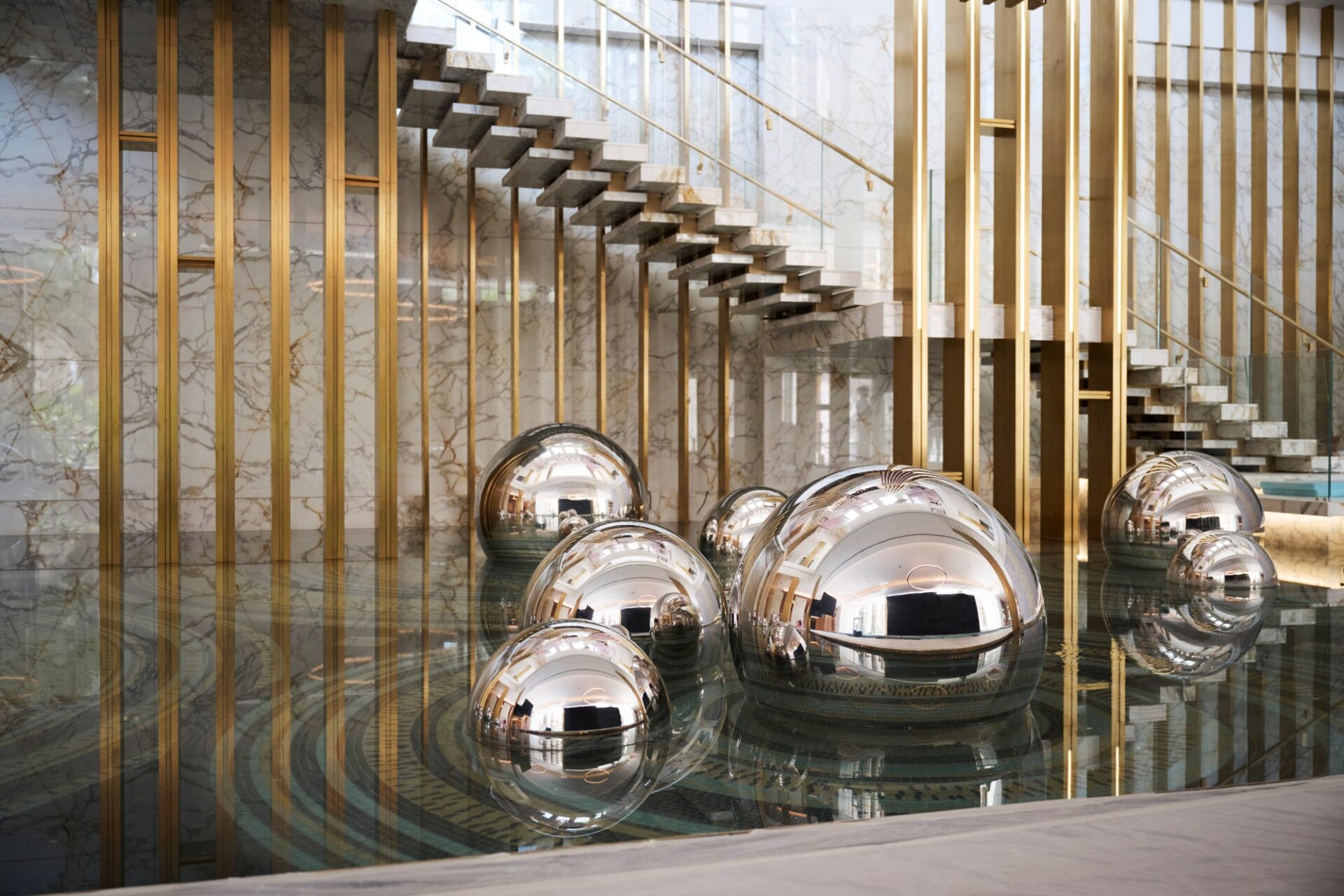 The interior design was a collaborative process between Kohn Pedersen Fox Associates and G.A Group. The interior design of Atlantis The Royal centres on the notion of water and water-based moments throughout the property, rather than the ocean, as can be found at Atlantis, The Palm.

The original design brief was inspired by the oldest inhabitants of the Arabian desert, the Bedouins. Known for their resourcefulness and hospitality, the tribes would traverse thousands of miles across the sand dunes using water wells, which were the lifeblood of the desert, to navigate.  The precious commodity of water is constantly celebrated throughout the property, with water features, sculptures and moments peppered throughout to guide guests on their discovery of the resort. 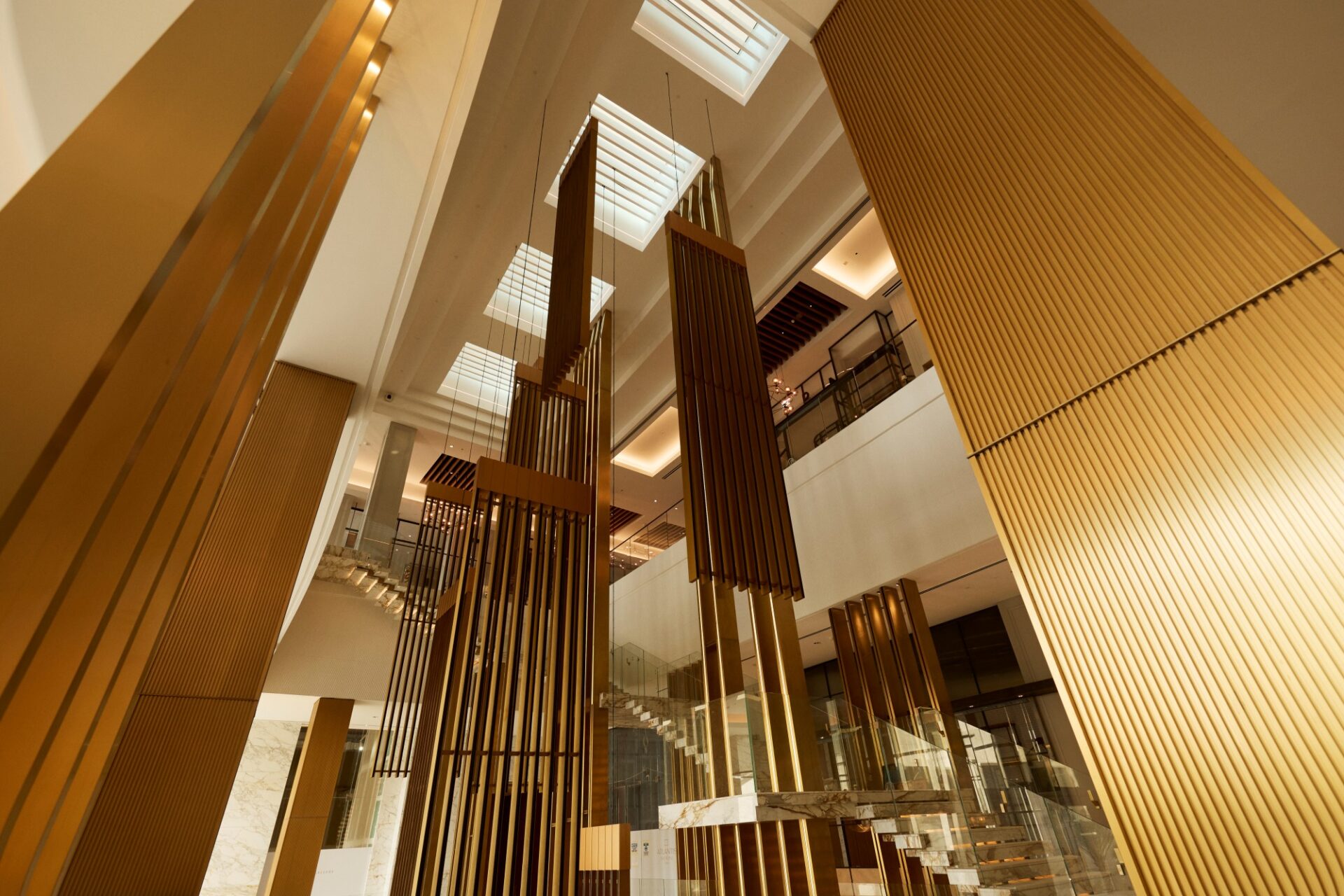 Examples of this can be seen in lobby sculpture Droplets, which represents the first drop of rain in a dry desert, to the Deluge water elevators, which invites guests to quite literally walk-through water to reach the next part of the resort. Cloud burst light fixtures feature at each elevator bank and hundreds of raindrop shaped light pendants delicately stud the lobby ceilings. 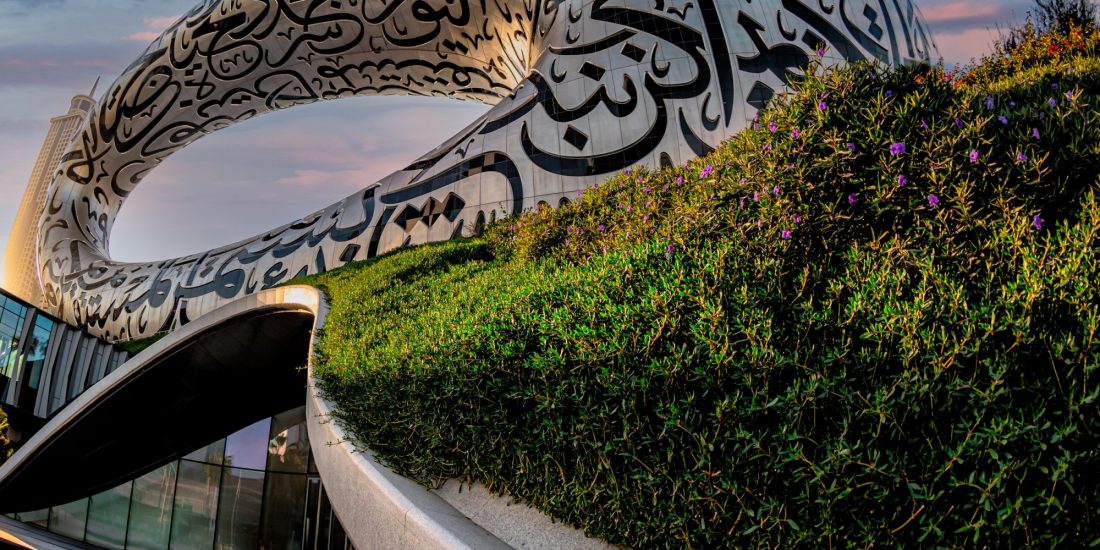 The Museum of the Future is a Parametric Innovation

Designed by architect Shaun Killa of Killa Design, Museum of the Future in Dubai is a stunning 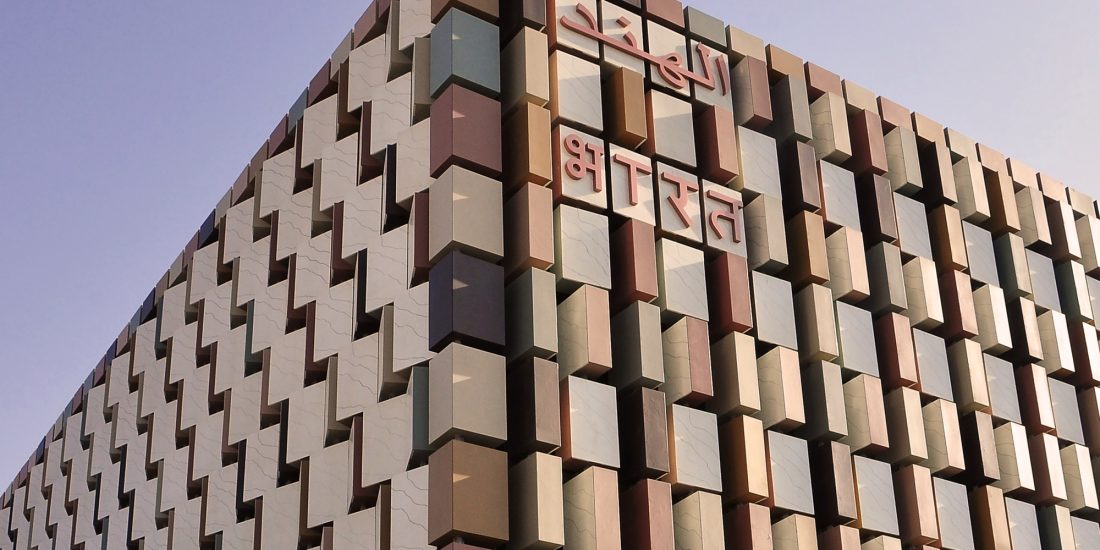 One of the largest pavilions at the Expo 2020 Dubai, the India Pavilion designed by C P