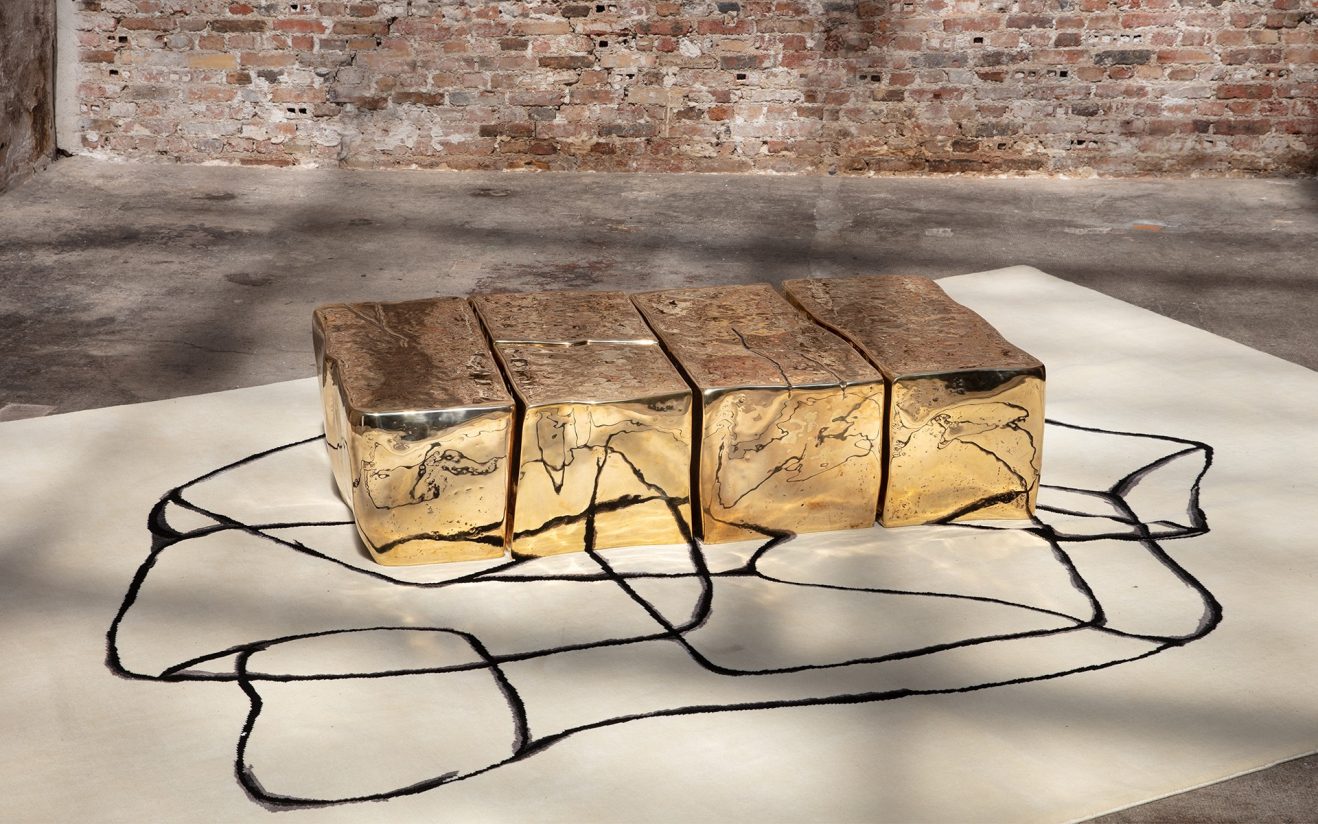 The Milanese doyen of design opens her doors once again to celebrate a Milan Design Week like never before including the Ro Plastic Prize, an international competition supported by Qatar Museums launched with an aim to spur a new cultural production re-using, re-cycling, and up-cycling waste. At Rossana Orlandi’s cult destination gallery, RO Collectible Design 2021 hosts a long list of established and emerging names who presented their work expressing emotions – the core theme that connects the community after the global pandemic. Our Milan correspondent, Debrina Aliyah, speaks to five of her favourites.

Benedetta Ubaldini begins from an empty space in her studio, and like magic, she weaves her work to life from thin air. It is a process rather challenging to imagine, one that would have been as interesting to observe as the final pieces themselves. “I really should finally get around to recording my workflow,” says Ubaldini. “Sometimes I look back past works, and I question myself, how did I even get there?”. The installation ‘What would I be without you,’ created explicitly for RO Collectible Design 2021, is a somewhat ethereal magical kingdom of pastel animals formed from wire mesh. “What I love is creating three-dimensional pictures. I want to fill large spaces with narratives, and I like them to be evocative and poetic without a sole objective of filling a space,” she explains. The installation is an homage to animals from a purely aesthetic point of view representing their symbolic qualities, evoking unspoken emotions, ancient totemic powers, and without which, humankind would not exist. 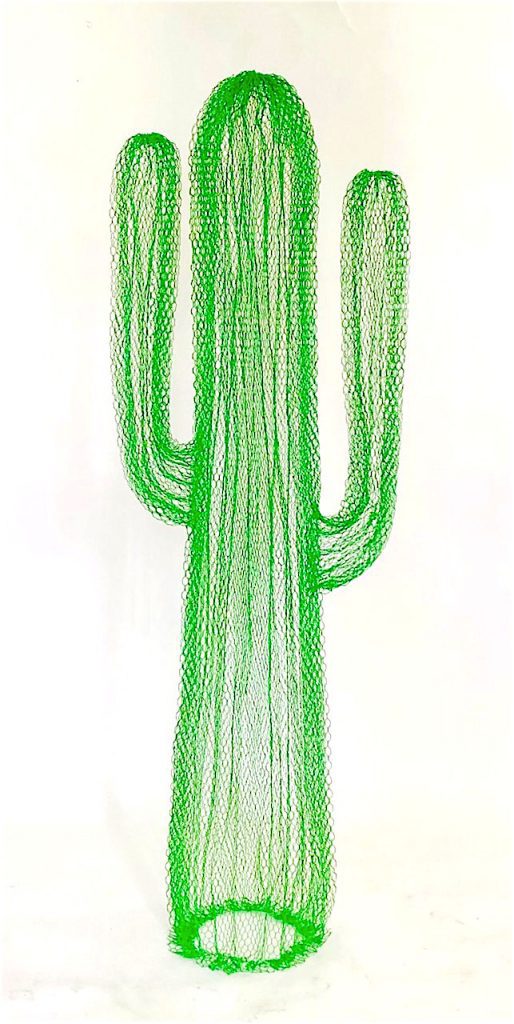 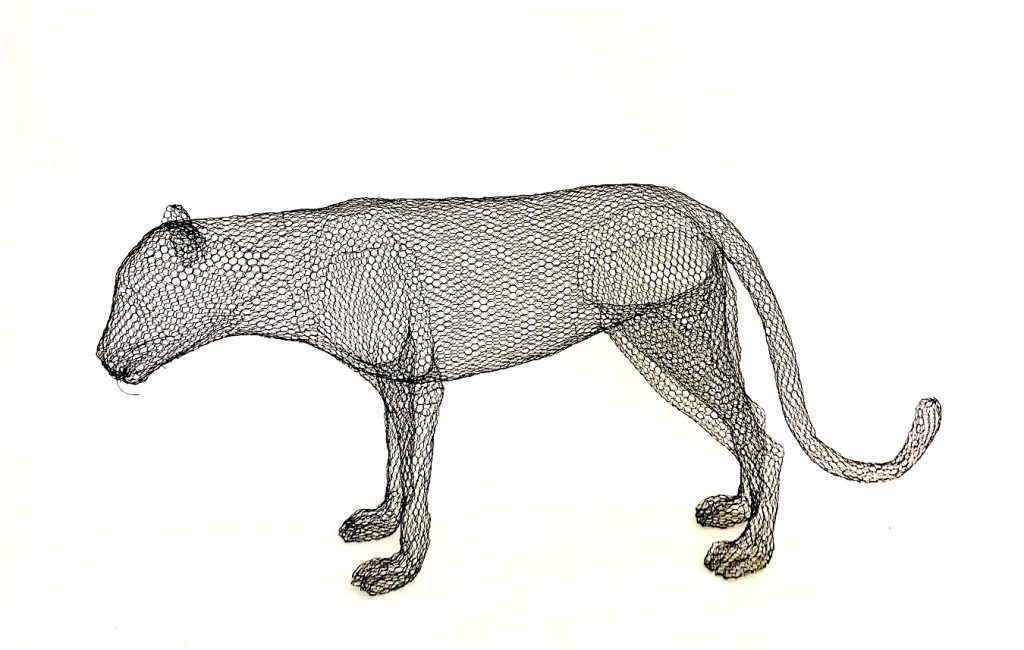 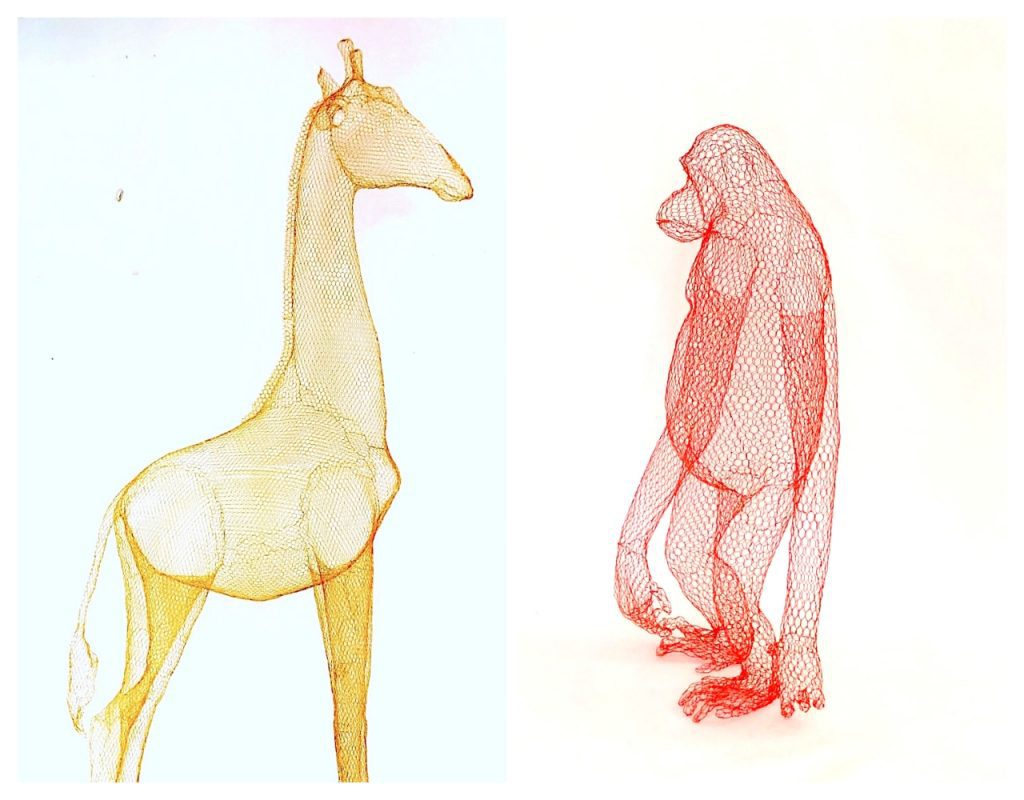 What happens when gigantic marble blocks fall? Jean Yves Lanvin found his inspiration from the quarries in Carrera for the shimmering gold block sculpture coffee table. “I recreated the cracks and the shatter lines,” he says, “and I wanted it to transcend interiors.” Asymmetric and robust lines characterise Jean Yves Lanvin’s vision. Rare materials, in this case, marble slabs from Tuscany, precise realisation, delicate work with metal and minerals, and an elegant style defined by the strength of the lines, all represent his unique creations. 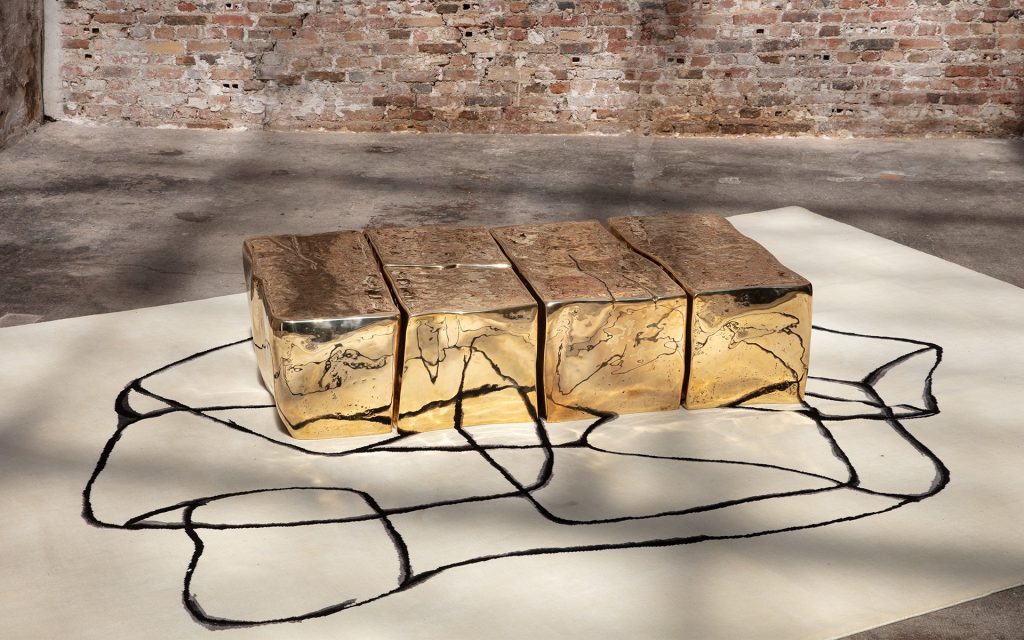 “The art to appreciating beauty, expressing it, must first come from within. I believe that only if it’s innate that you can then grasp all that is beautiful in the world around you,” says Manu Crotti, the artist that immortalises her memories, represented by tiny objects and images in layers of epoxy resin. These keepsakes meet curiosities are fragments of the artist’s life, the most recent incorporating the experience of the pandemic, now manifested in the cabinet, La Gioia. “The solitude made me reflect a lot, and I think it’s imperative that every one of us has changed somewhat on the inside from this experience,” she comments. Her particular technique of casting several epoxy resin layers gives her work three-dimensional appearances where the objects seem to surface from the resin over other things and images create the illusion of a floating collage. Her works are functional interior objects that blend into spaces as tables, cupboards, mirrors, or room dividers. 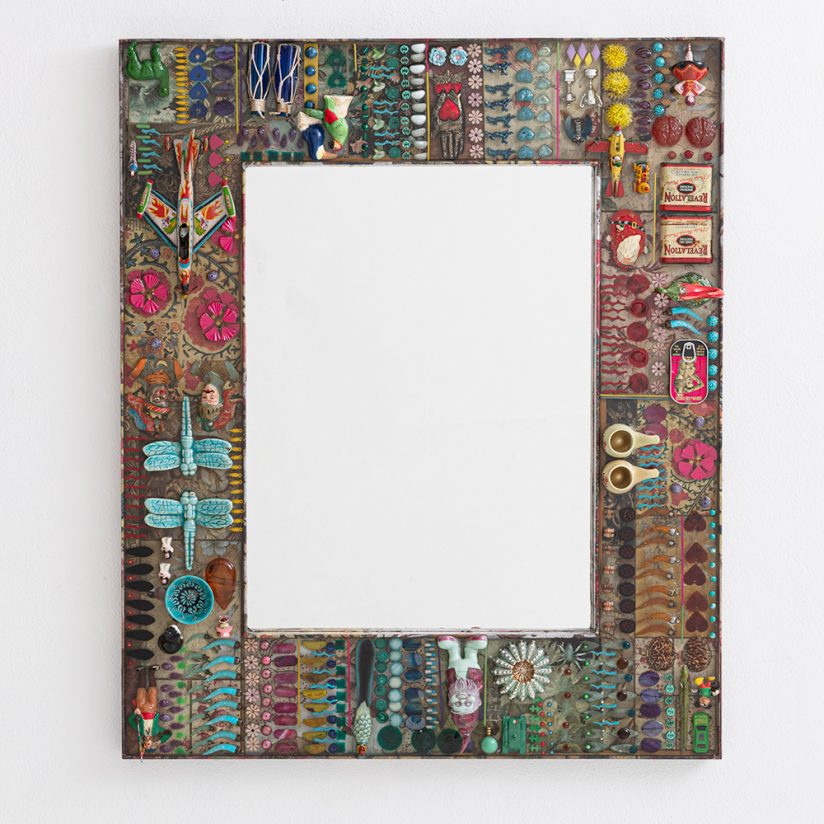 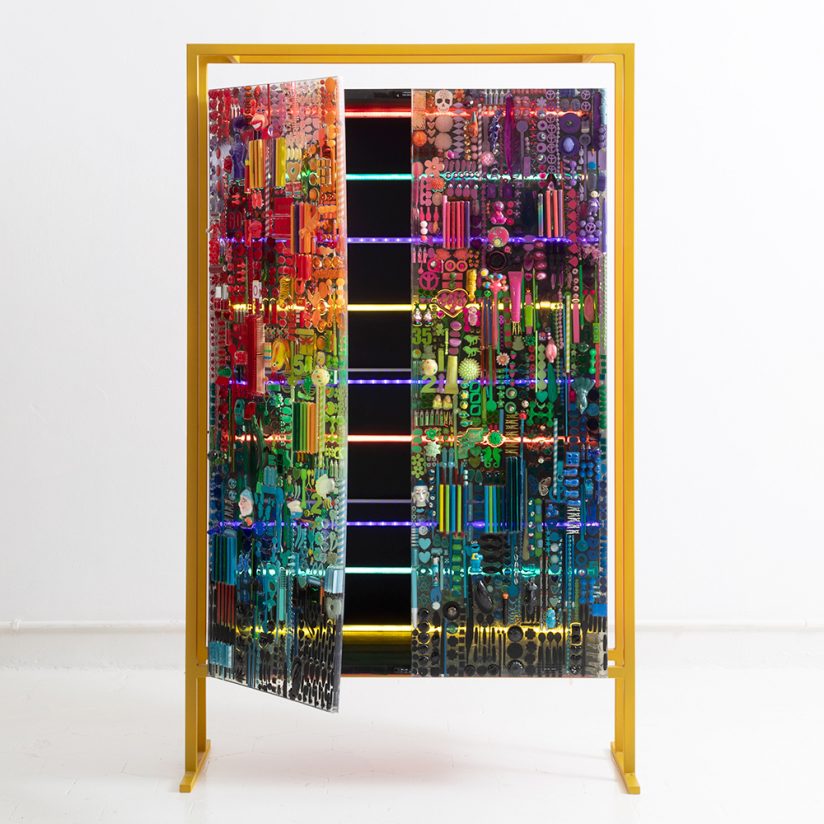 Hillsideout is Andrea Zambelli and Nat Wilms’s moniker that reflects their vision of objects that draws external elements from land and brings them into interiors. In focus, the Karmasutra throne, created from putting together various little stools made from discarded walnut wood floor tiles, forms a grand chair. A glass panel insert at the headrest with an image of an ancient sculpture from a Hindu temple complex in Khajuraho, Madhya Pradesh in India gives the first edition of this object its name. “The idea is to be able to play with the arrangements of the different stools and to change the image insert to create different editions,” says Wilms. With a little flip, the throne turns into a lounger to stretch your legs. From the couple’s Brazilian Artist-in-Residence programme to the Lines Under The Forest series inspired by the gigantic hieroglyphics of geometric forms found in the Amazonian forest, used as motifs on a tabletop through the inlay work by using certified woods which come from the Amazonian forest: Roxinha and Muiracatiara. These hieroglyphics in the modern-day are partly covered or destroyed by recent development, which is also represented by Plexiglass inserts. 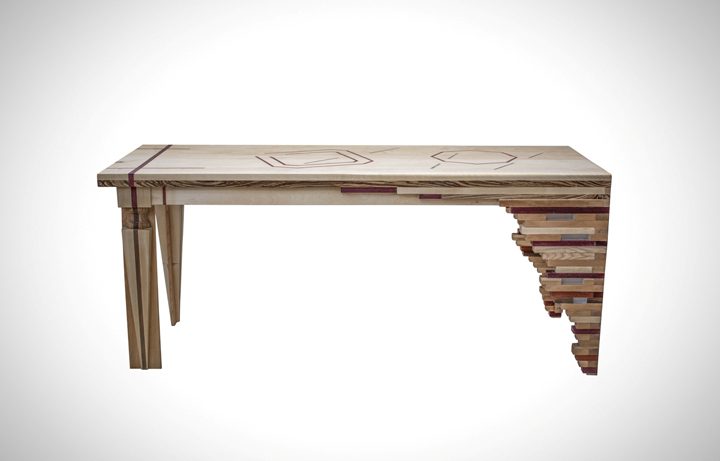 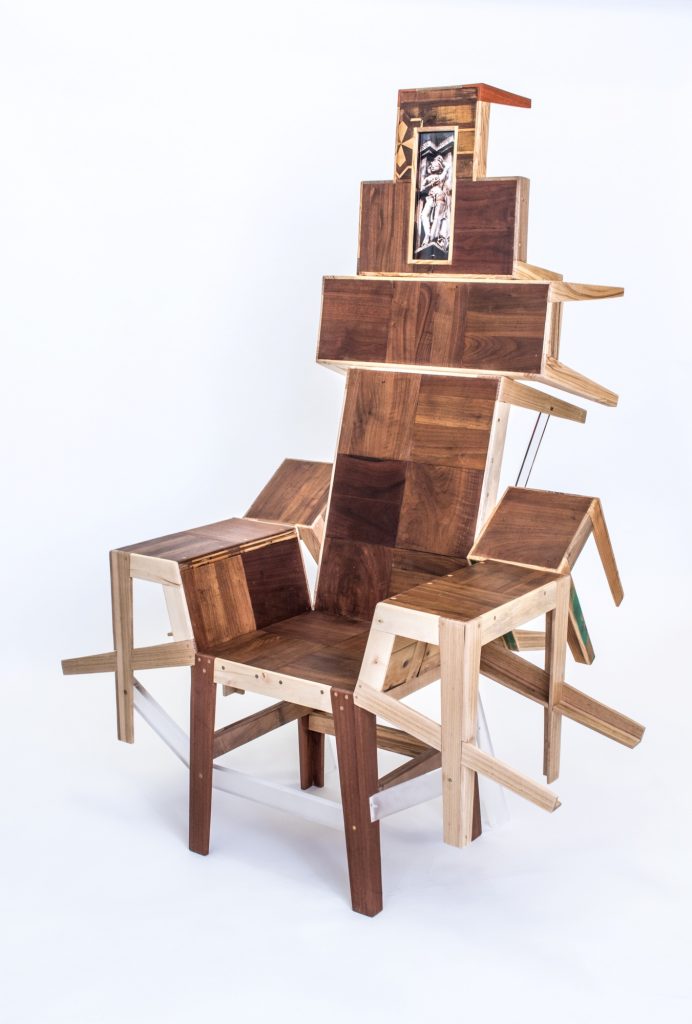 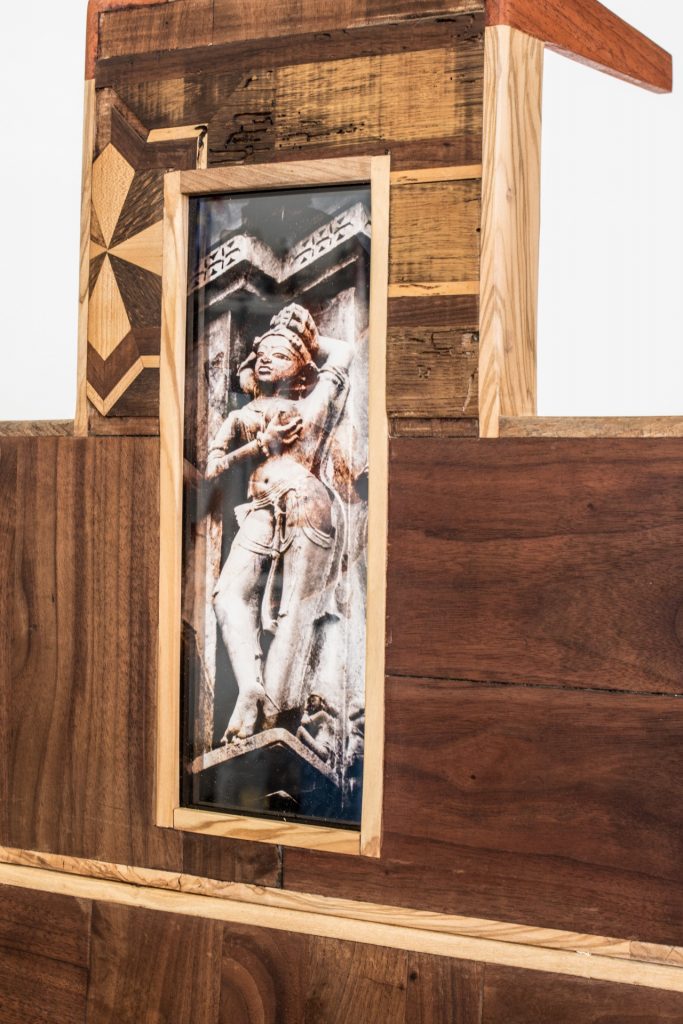 The design trio, Marco Tabasso,  Tati Uzlova and Robert Andriessen’s, first escapade out into the wild shortly after travel restrictions eased was aptly into The Land of the Giants, the Mashatu Game Reserve in Botswana. Setting themselves up in front of a watering hole, their new 24 digital video is a spectacular yet soul-soothing eye-feast of wildlife biodiversity and majestic skies with a soundtrack of unorchestrated hymns of the wild. Elephants, impalas, wildebeests, and glimpses of predators framed in a rustic bamboo window blind; it’s like waking up right within a Jungle Book setting. 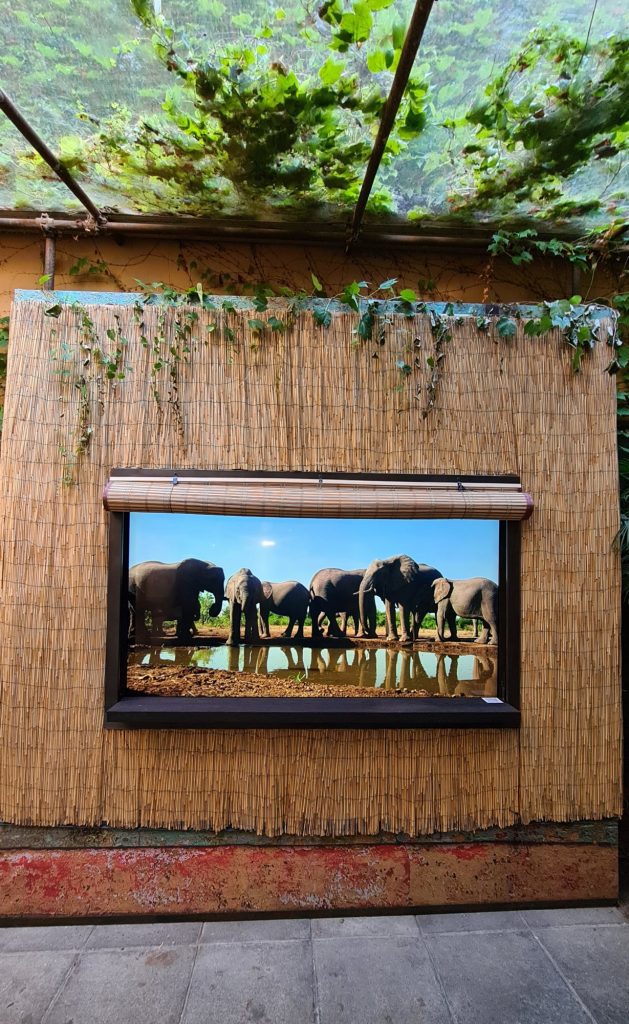 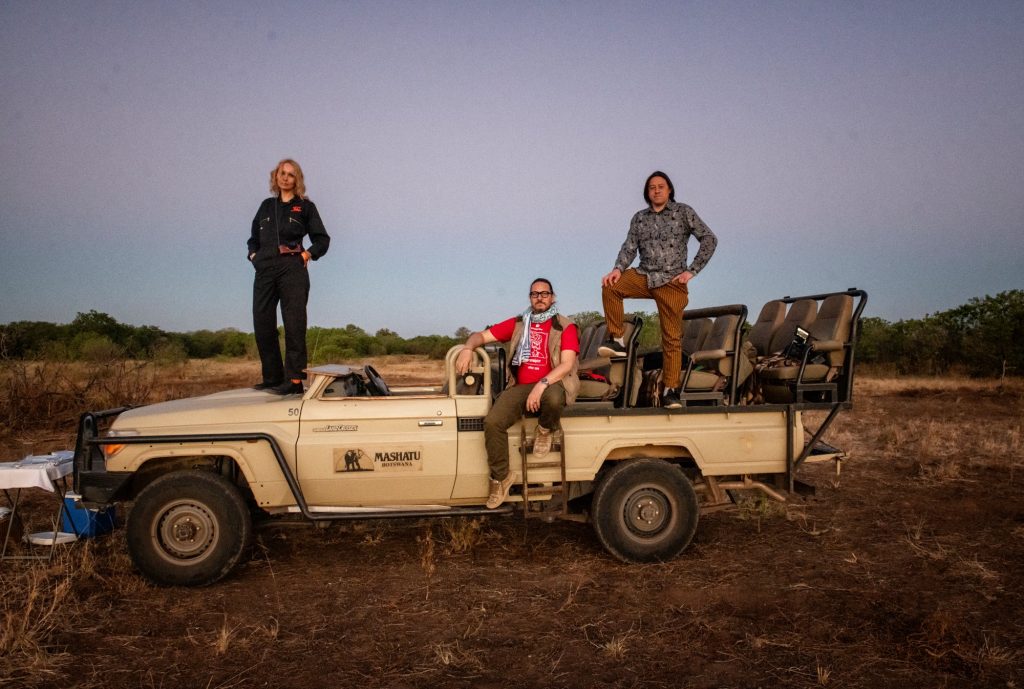 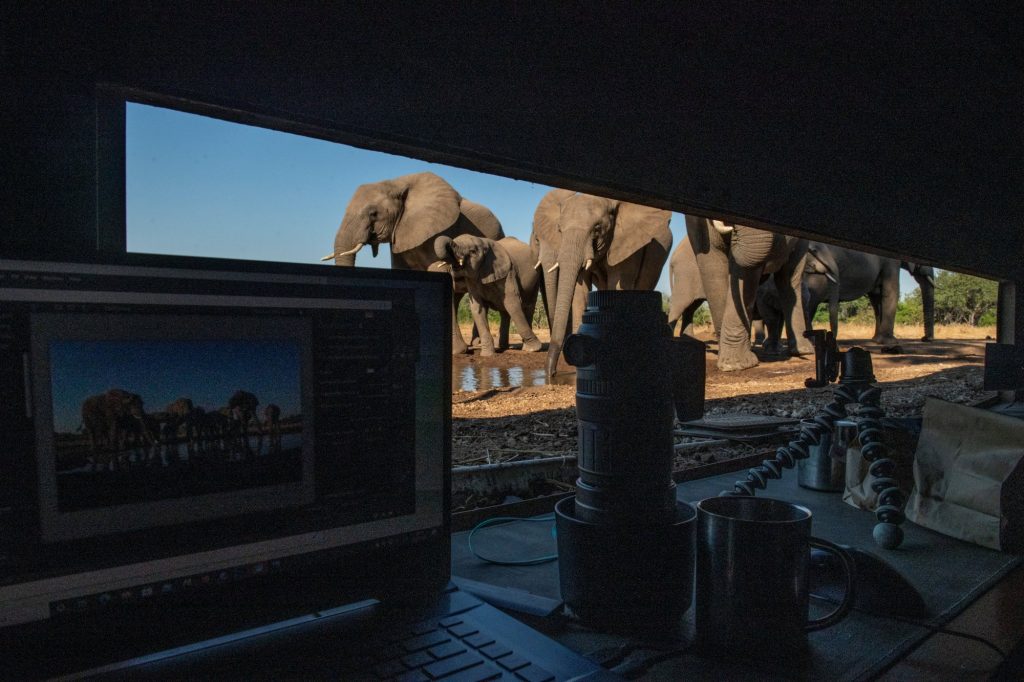 Giovanni Innella’s works can be described as the sum of small things that result in a bigger picture. Innella stacks together plates of various sizes to give form to everyday kitchen objects from vases to jars, which result in a storage solution with an allure of style. The artist is currently teaching at Virginia Commonwealth University’s School of the Arts in Qatar (VCUarts Qatar). 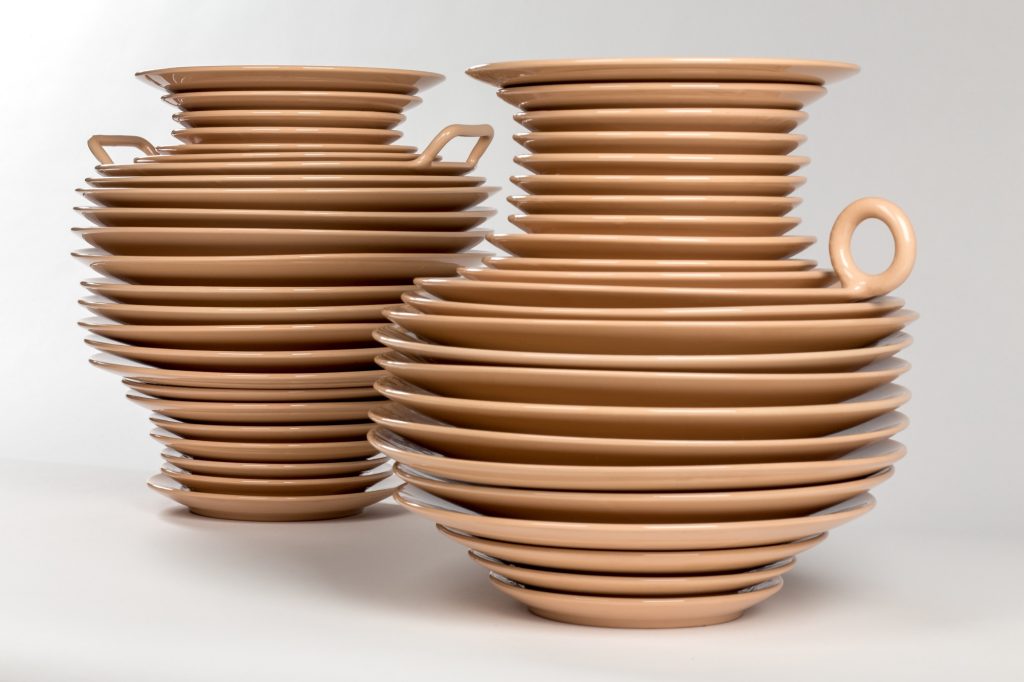 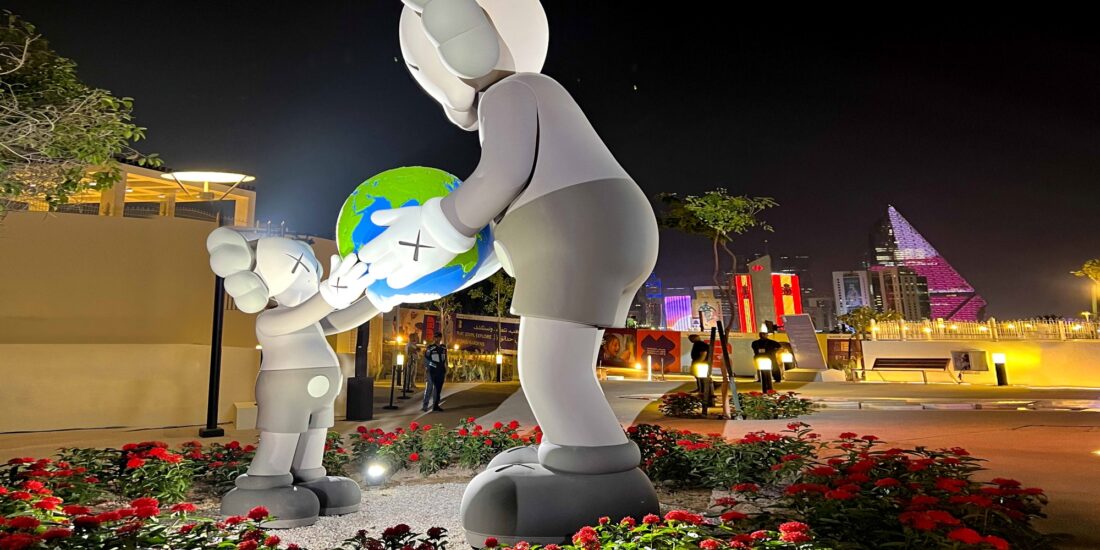 Another Public Art Installation by Kaws Unveiled at Dadu Gardens 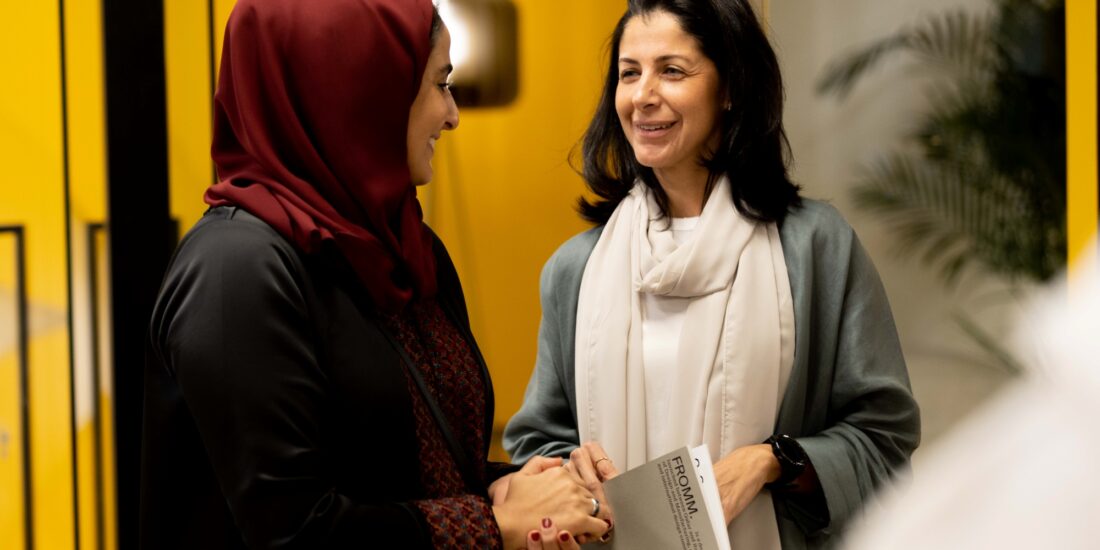 The Empowering Mission of FROMM.

FROMM,  the newly launched design brand conceived between Doha and Milan, opened its doors in Doha on 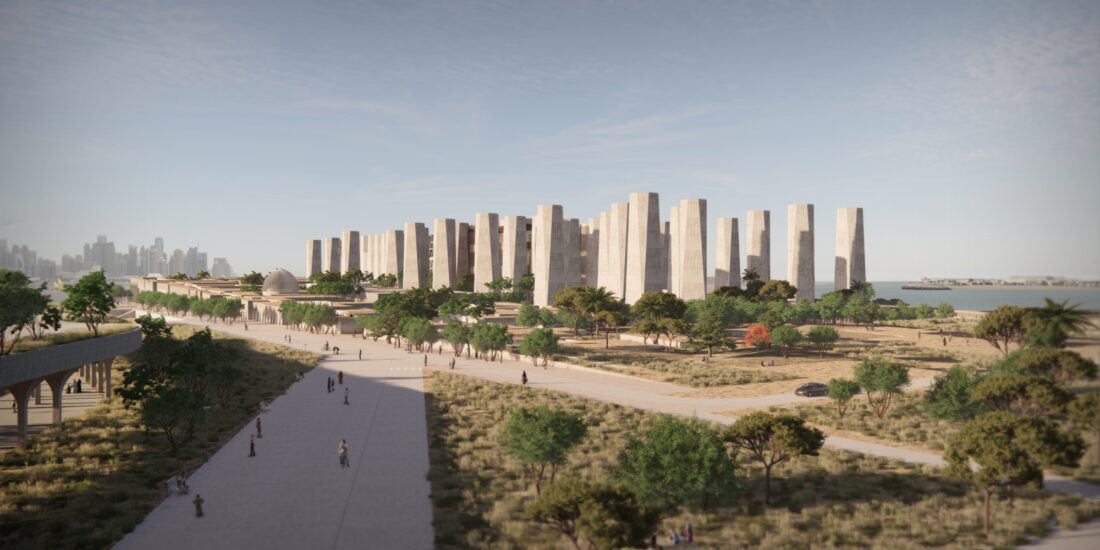