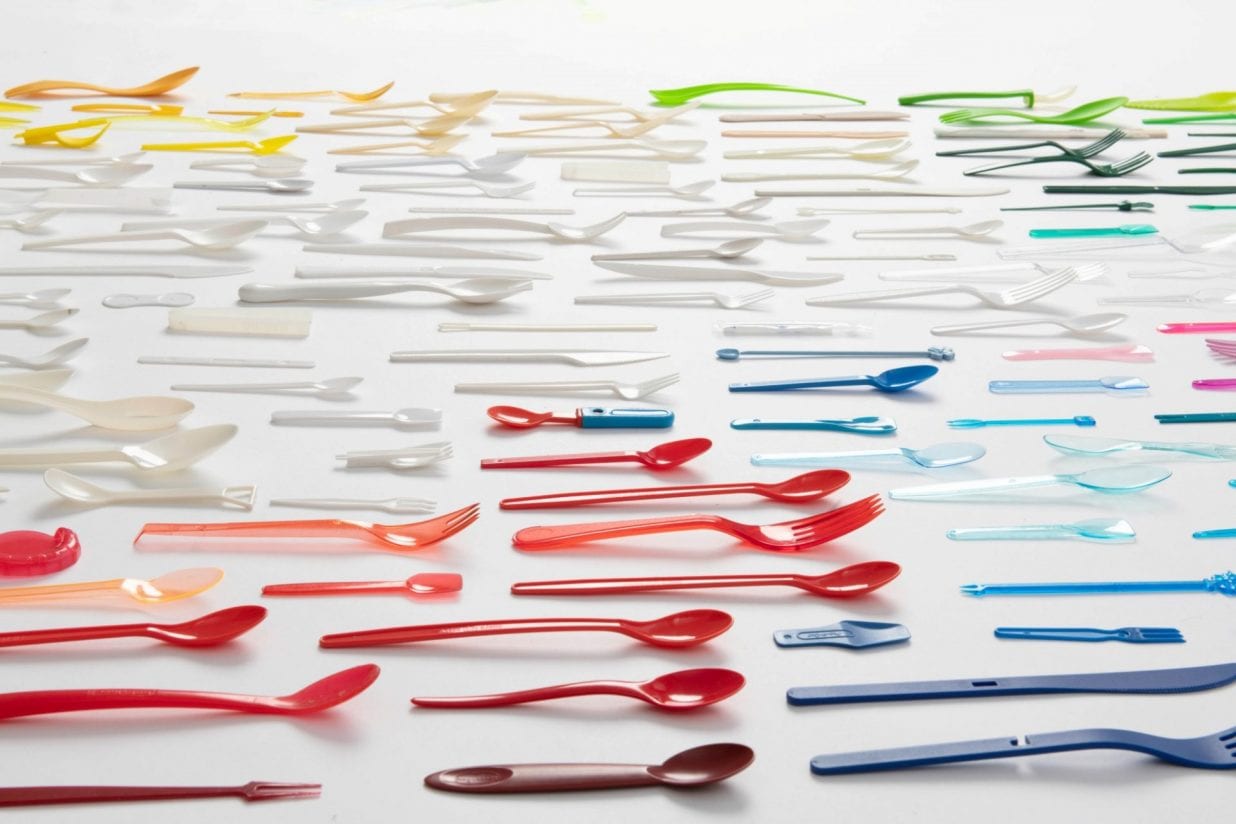 The ongoing London Design Biennale is an interesting display of the all too familiar and entirely ordinary disposable spoon. Product designers Peter Eckhart and Kai Linke are the designers of Spoon Archaeology at the German Pavilion, curated by Thomas A. Geisler, director of the Kunstgewerbemuseum. By Amiya Hisham. 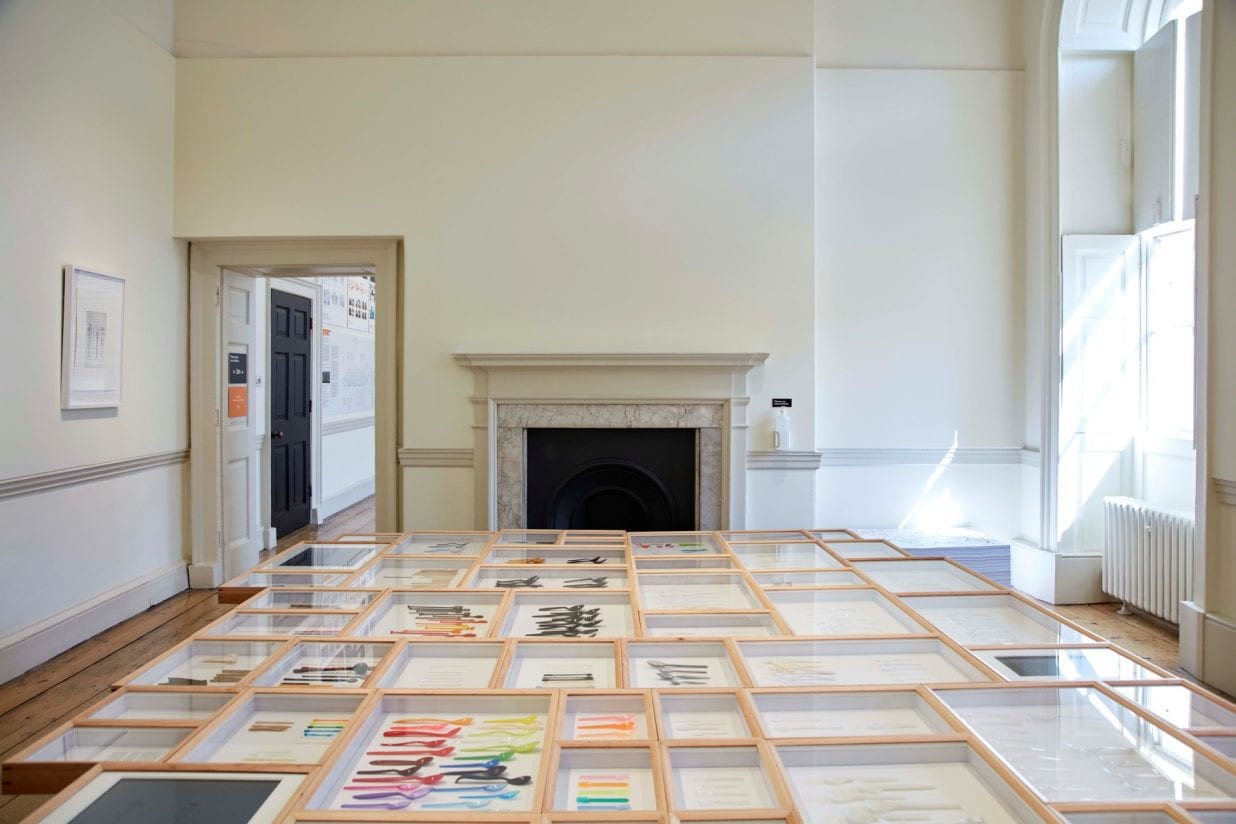 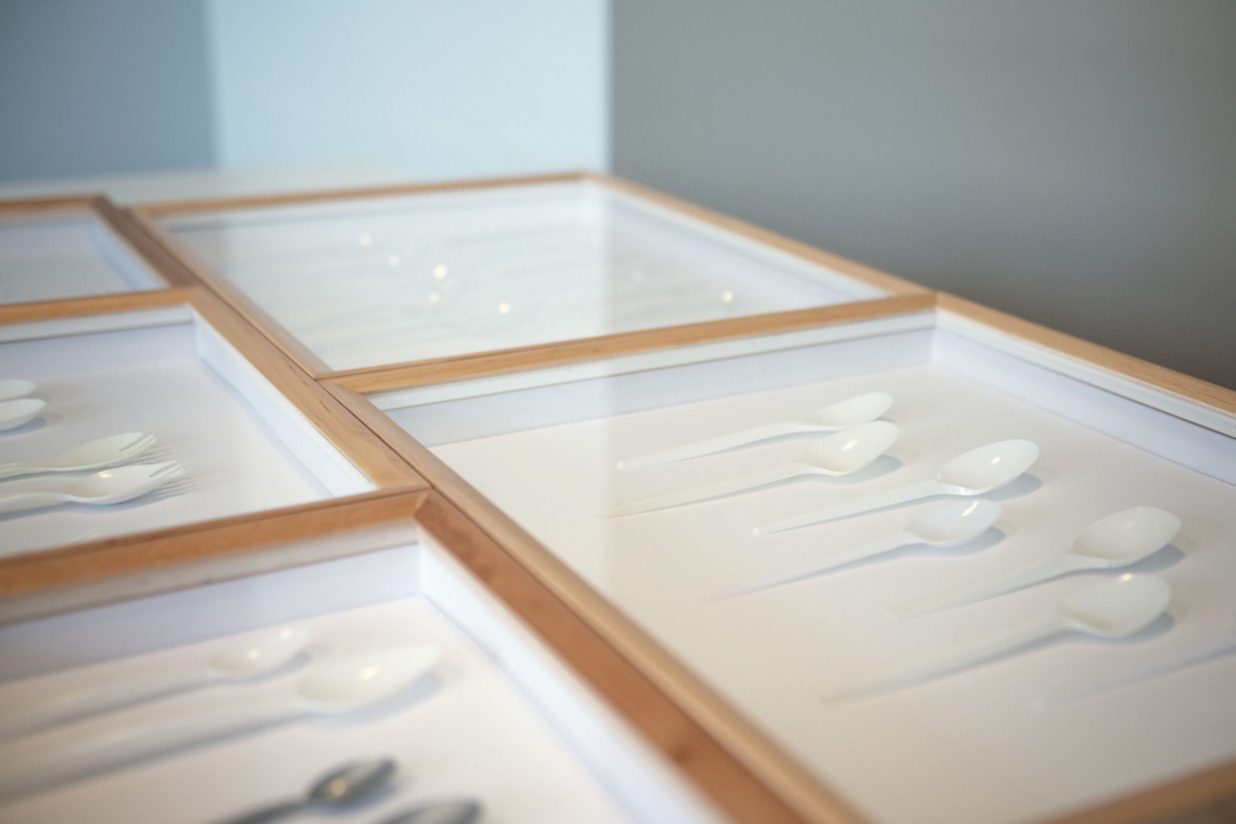 Ostensibly it is a beautiful array of differently shaped spoons of varying sizes and colour. Placed carefully in their glass cases like fossils or ancient artifacts, they implore the viewer to examine the ubiquitous object which is not quite obsolete yet but is about to be done away with for good.  The exhibition takes place ahead of the proposed ban on plastic cutlery by the European Union from July 3 onwards. This must be regarded as a historic ecological decision as well as a moment for renewed design thinking. Spoon Archaeology lays bare the cumulative detrimental effect of the throwaway culture of yesteryears and how design remained its tacit enabler. Eckhart and Linke began to collect disposable spoons nearly 20 years ago independently.

The collection is termed by the designers as ‘today archeology’, an interesting proposition that takes stock of the scale of impact of human behaviour in relation to design, probes at the relative necessity of design as well as motions to alternatives for the future.  The exhibition is accompanied by three films that complete the message: Fingers and Food by Eckhart and Linke with Julie Gaston and Robin Schmid, depicts the pleasure of eating without any cutlery, Beyond Spoon by Eckhart, Ken Rodenwaldt and Armin Arndt and Charles and Ray Eames’s ‘Banana Leaf ‘ from 1972. 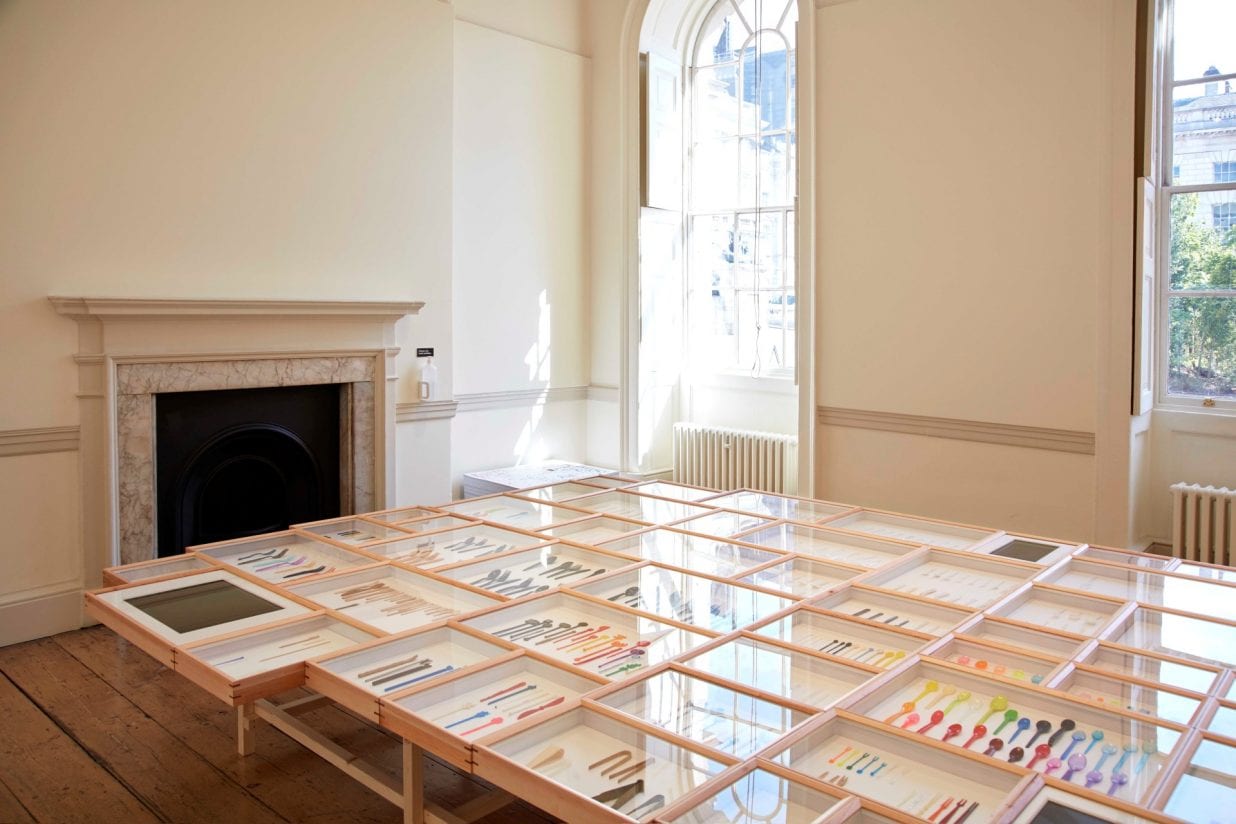 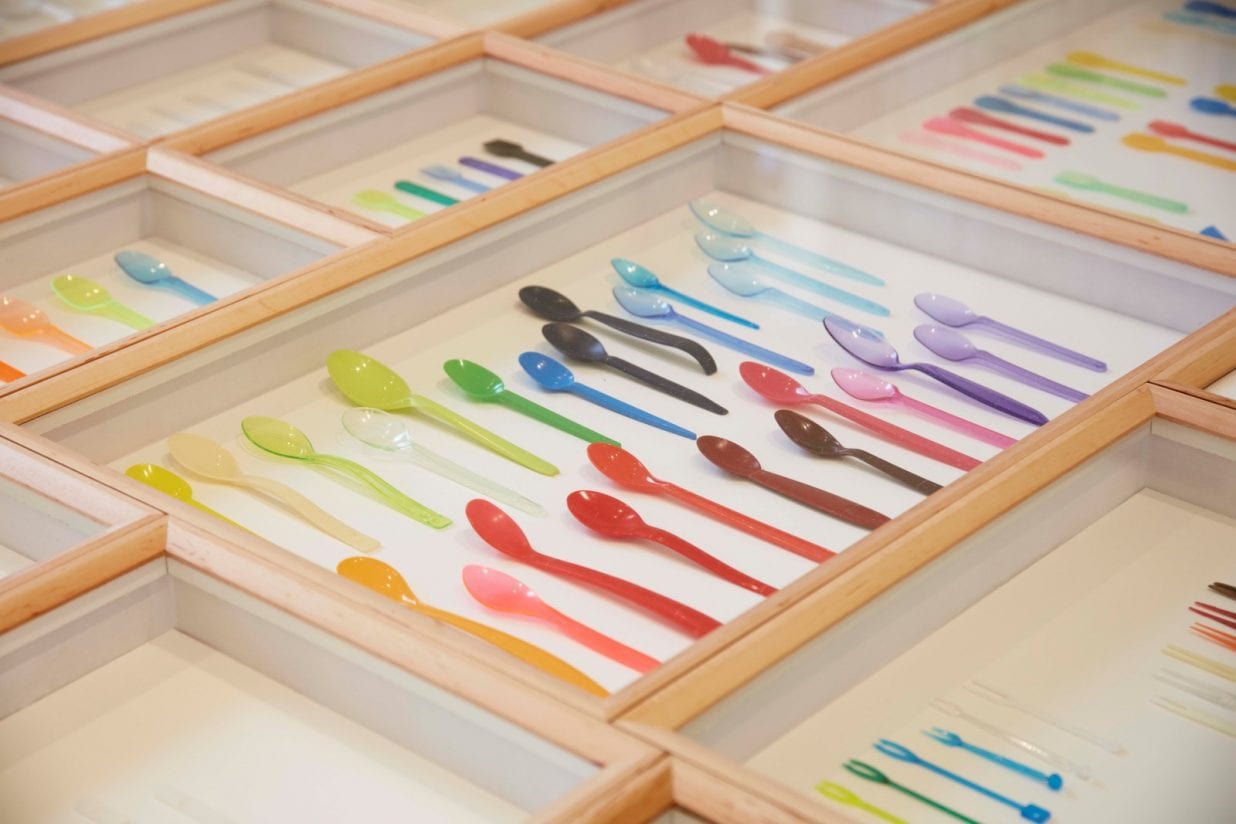 SCALE engages with Kai Linke to learn more about this novel collection and the ideas that transpired from this.

SCALE: What were your initial thoughts when you began collecting spoons 20 years ago?

Kai Linke: As with probably every collection, at the beginning, you don’t even know that you are collecting something. Only gradually do similar objects come together and form a collection. our collections came into being by chance, say on journeys, through a fascination for the diversity of eating tools – in forms, applications, materials, colors, cultures. At the first glance, they seem good, practical. At a second glance, their destructive scale becomes apparent.

SCALE: You began collecting individually. What kind of ideas transpired from sharing your finds with one another?

Kai Linke: When we looked at our collections together for the first time, the sight was overwhelming. We saw 1400 pieces in front of us. At first, it looked like a huge, colourful pile of rubbish. At first, of course, you think they are all similar. But then you see the special differences.

SCALE: We are on the cusp of stark ecological and cultural shifts. The exhibition comes at a time when the world is gently stepping out of the pandemic, and a change of habits en masse is underway. Could you tell a bit more about ‘today’s archaeology’ in this context?

Kai Linke: We named it “today’s archeology”…The cutlery is a complete expression, a representation of our economically driven culture, which probably comes to an end regarding the prohibition of take away, products like cutlery, plates, cups, and so on but also in regard to changing awareness.

Eating tools eventually adapt to the developments of human life and are thus significant factors in our table and dining culture as well as in the history of technology.

Plastic cutlery is a global phenomenon and also a global problem. They are mass-produced, cheap, easy to transport and disposed of. Ultimately, they are a symbol of our globalised logistics and throwaway culture. Staged as archaeological remnants, curiosities, and objects of fascination they are contemporary witnesses of an era that has just ended and provide information about the state of the global consumer society. Disposable cutlery produced in the previous decades will soon become artifacts of our recent past. As displayed objects, cutlery does not only convey information on their usage or on different cultures but moreover provide conclusions about dishes, which are part of optimising food intake too. 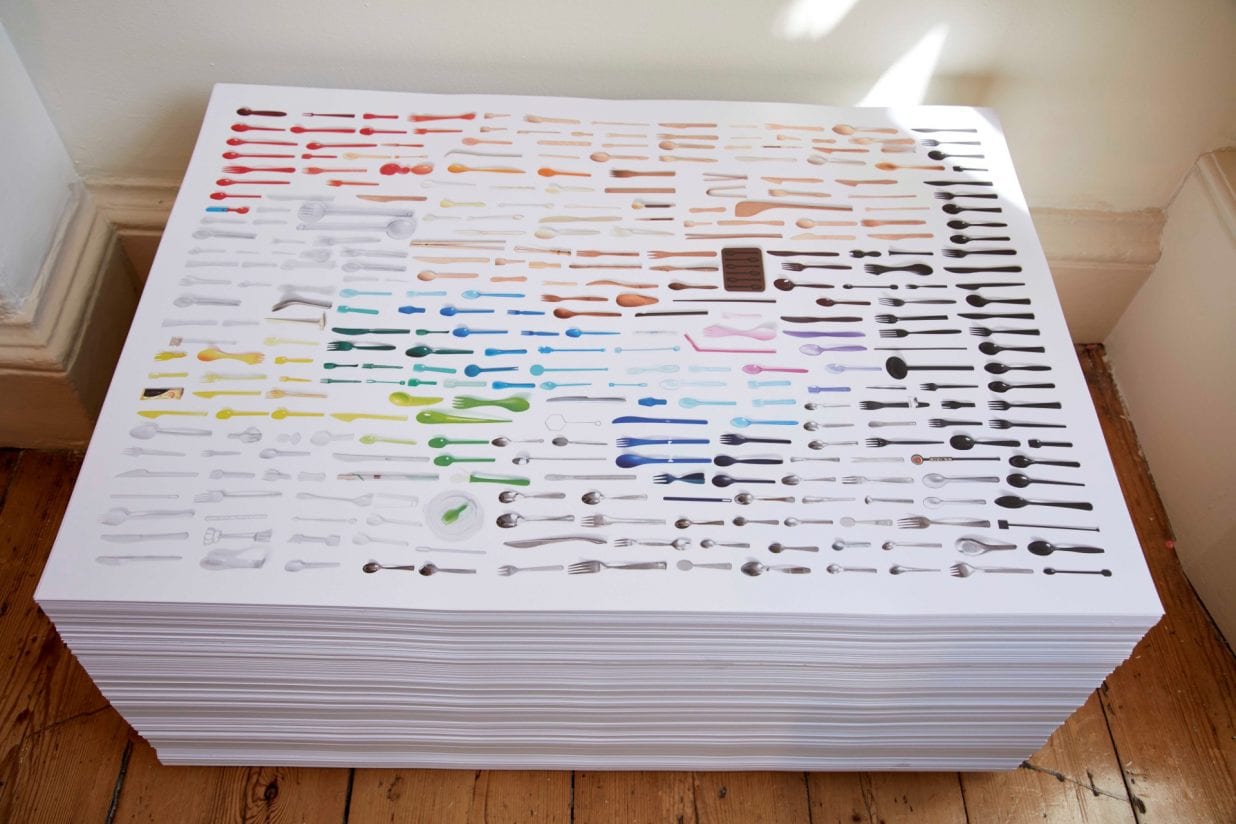 SCALE: What do you hope to communicate with the juxtaposition of these three films alongside the archaeology of spoons?

The Banana Leaf film was a valuable find for the work on the Spoon Archaeology project, providing a clue to the behavioural change needed in the way we treat our things and waste. So, the banana leaf is a historical design document but it can be seen as a proposal for future culture.

There is the necessity of design to look to cultures that are probably not driven by logistics. During our research, we became aware of the fact that for almost half of the people on earth, eating with fingers, i.e. without tools, is a part of everyday life. The hand is a perfectly developed eating tool. You can see this, for example, in our film Fingers & food. 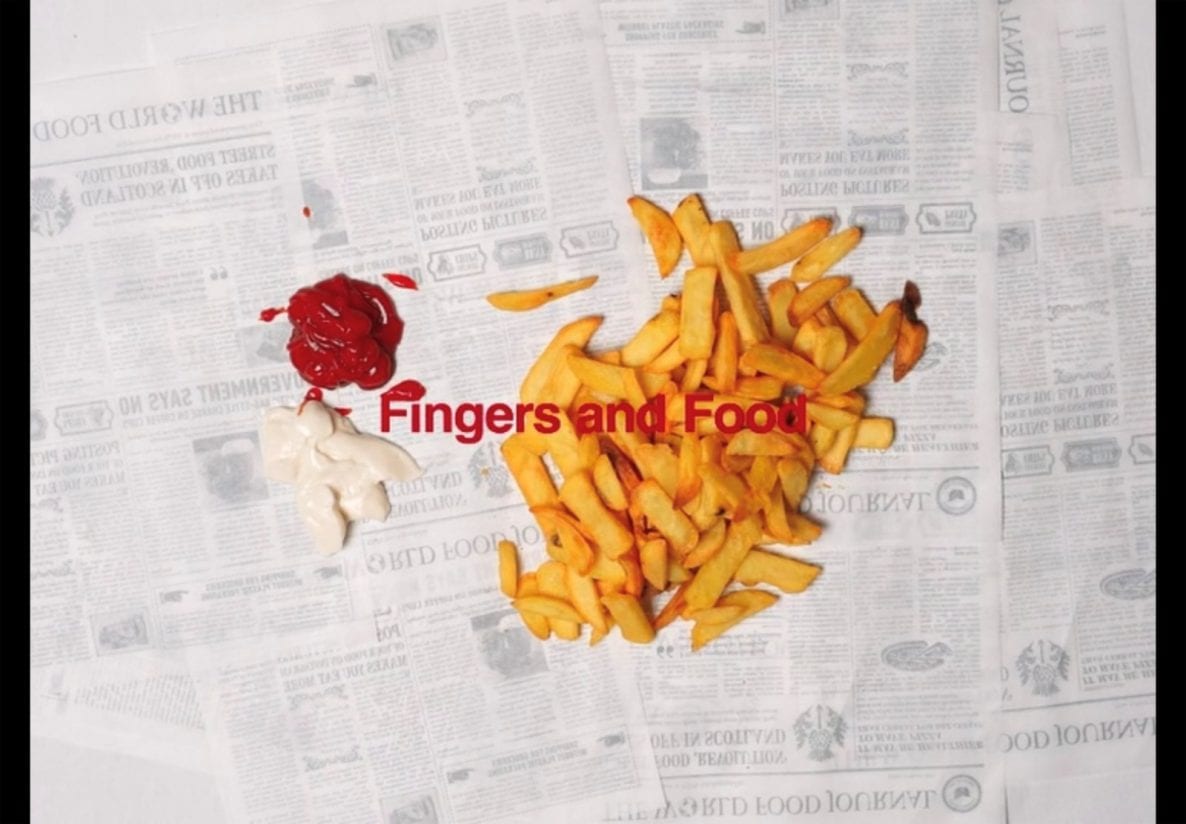 “Fingers and Food” was filmed in Offenbach am Main / Germany in 2021. Offenbach is a city with over 159 nationalities living together and has the highest percentage of people with a migration background in Germany. The short film demonstrates how enjoyable and natural eating with the hands can be and gives an impression of the versatility of the hand as a multifunctional eating utensil. In the context of the exhibition “Spoon Archaeology”, “Fingers and Food” also implicitly suggests a change in behaviour and a re-consideration of adopting alternative cultural habits as a necessary means for future handlings of disposables and refuse. 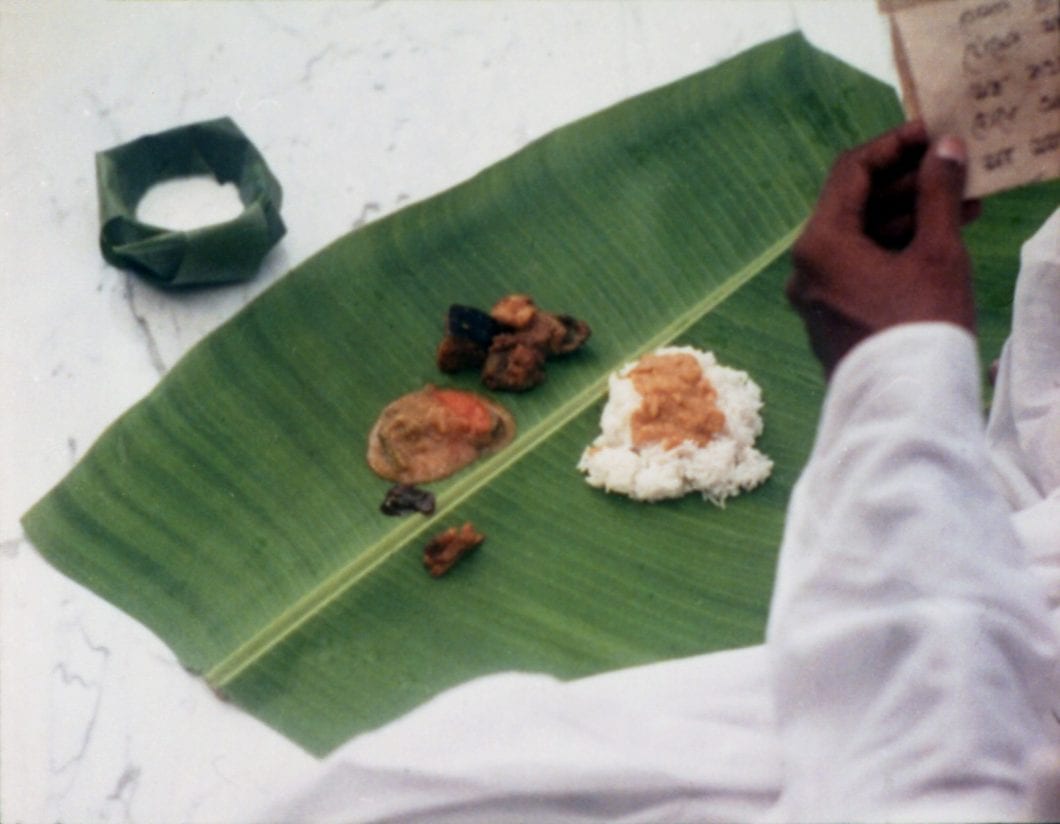 The film “Beyond spoon” was made in Offenbach in 2021 and documents a neural network’s attempt to generate one typification of a spoon that embodies a vast archive of disposable spoons around the world. Through AI computer-aided identification, new synthetic images of spoons evolve as a living memory of disposable plastic spoons. By adding the hand as a priming sample to the collection of eating utensils, the machine amalgamates and unites to form a hybrid as a narrative of consolidation for the future.

The films show that the hand as an eating tool is still unparalleled in the year 2021.

Peter Eckhart is the co-founder of unit design along with Bernd Hilpert, a design practice based in Frankfurt with over 20 years of experience in developing design solutions to highly creative and strategic standards.

Kai Linke is the founder of Studio Kai Linke, an interdisciplinary design practice started in 2009 and based in Frankfurt, concerned with product & exhibition design, art direction, innovation consulting, and architectural collaborations.

The London Design Biennale, founded in 2016 by Sir John Sorrell CBE and Ben Evans CBE, is now on, featuring exhibits responding to this year’s motto “Resonance” which deals with the consequences of design and production.

A Clean-air Playground in Poland 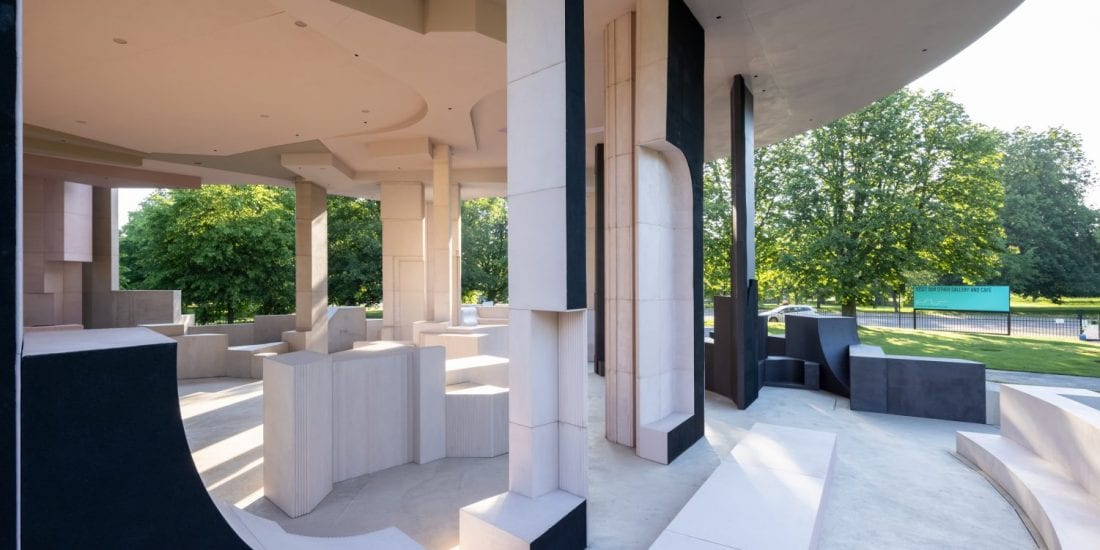 Places of Meeting at the Serpentine Galleries 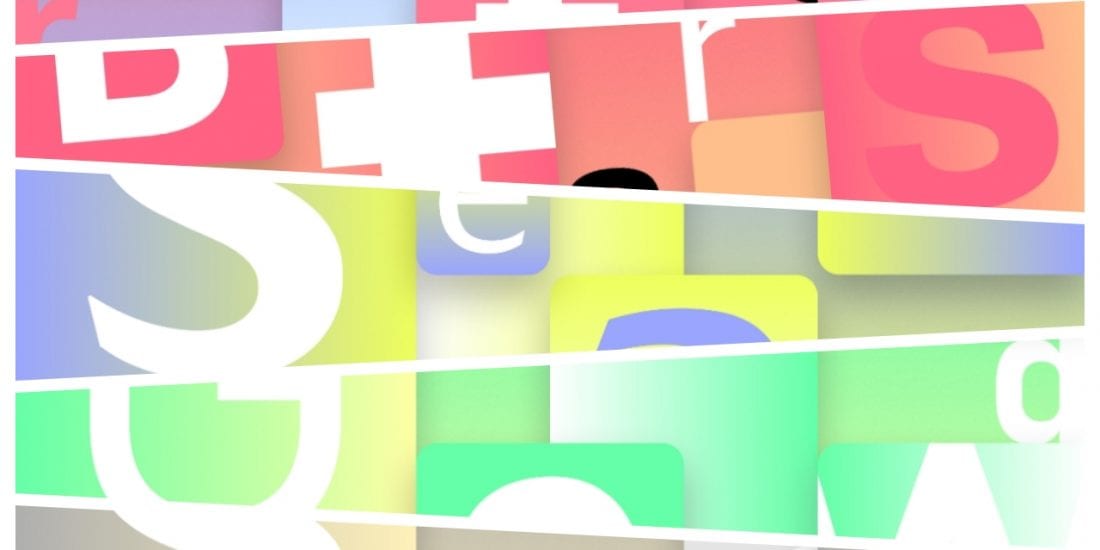