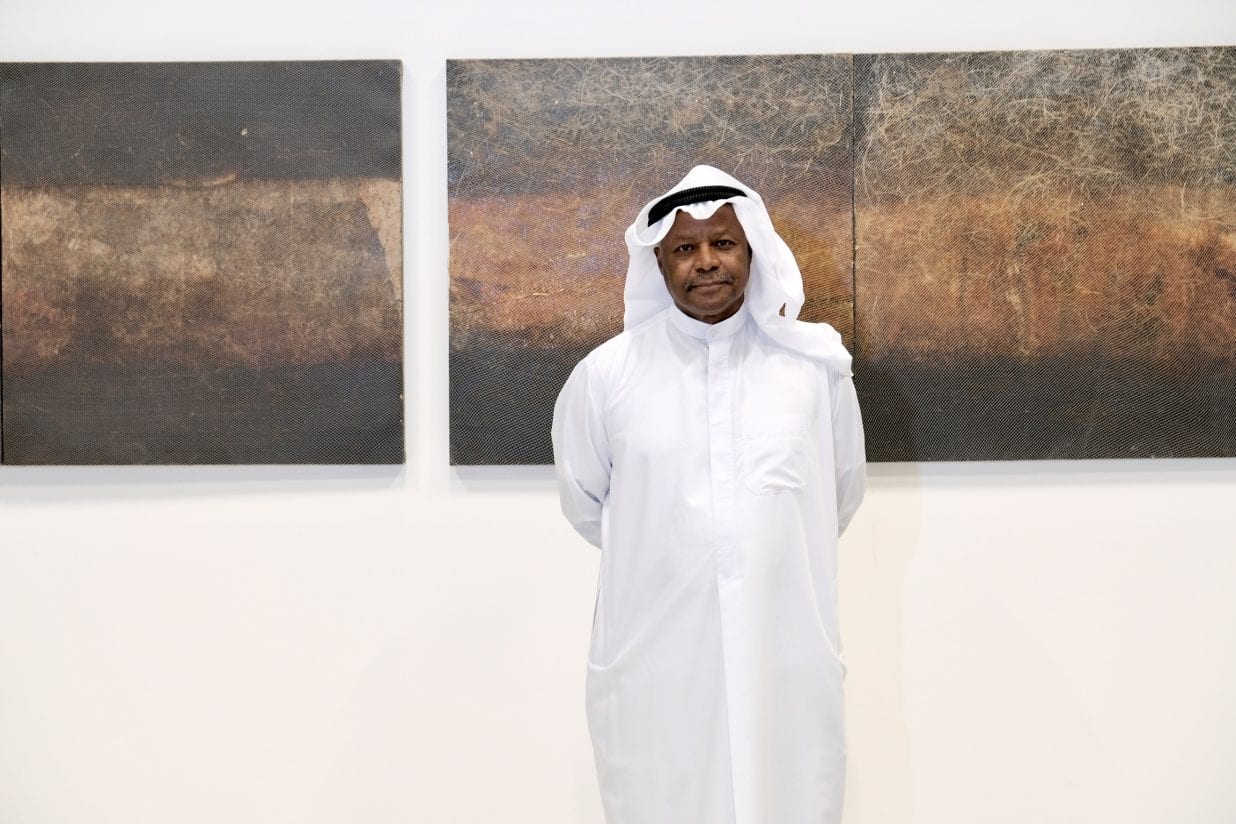 Between the Seen and the Unseen

As part of the Qatar-India 2019, Year of Culture, Qatari artist Faraj Daham was sent on an art sojourn to Mumbai and Kochi and his impressions of the diverse country are currently on exhibit at the Fire Station Museum till the end of the month.

Qatari artist, Faraj Daham has been omnipresent in the local art realm, coming up with work that is grounded in the present while being responsive to the world around. Self-reflective, his work explores different mediums, inks, and materials. He was chosen to be the artist to travel to India as part of the Qatar-India 2019, Year of Culture and his month-long residency in Mumbai which later extended to Kochi, has resulted in a work of art at The Fire Station Artist in Residence titled “See the Unseen”. 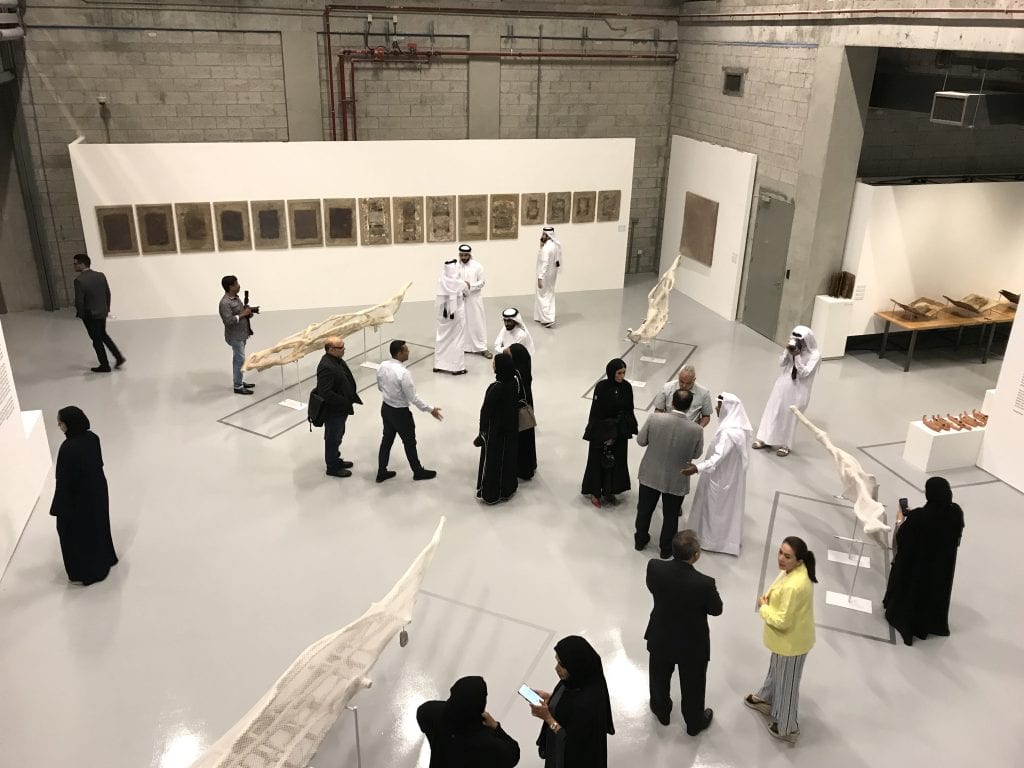 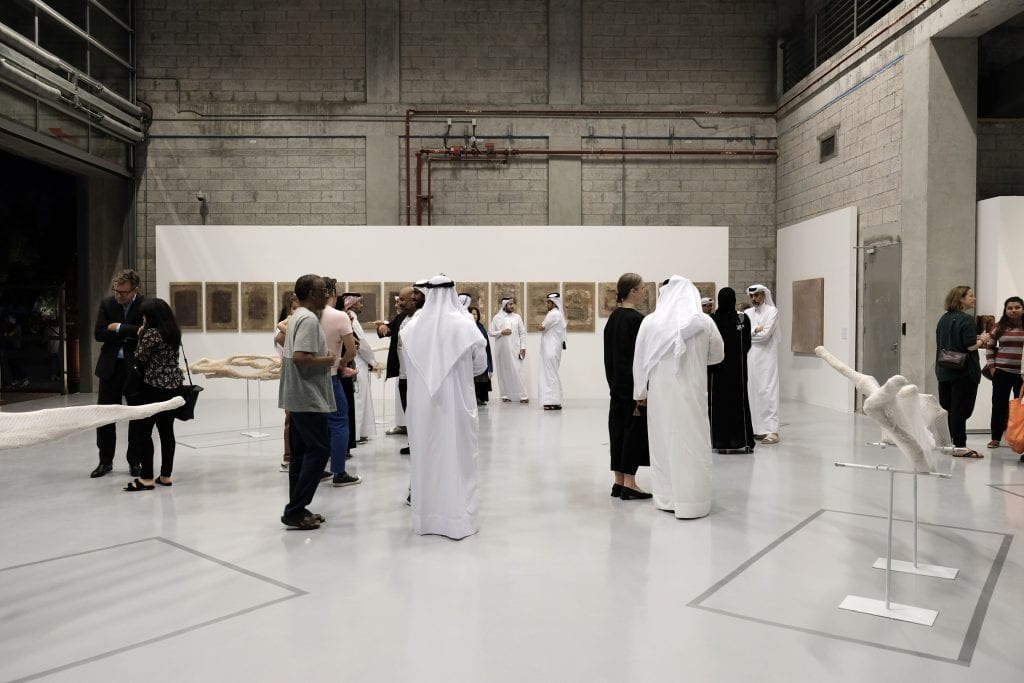 Faraj’s month-long residency came as part of the Qatar-India Year of Culture which is aimed to promote mutual understanding, recognition, and appreciation between the two countries through various programs and initiatives. During his stay, Faraj was provided with an individual studio space, professional networking opportunities and an intellectually stimulating environment for dialogue on visual art practices for artists and curators at What About Art, a professional arts management agency based in Mumbai since 2009.

“I spent one month in Mumbai with an institution called “What about Art” as the organization had an association with Qatar Museums,” says Faraj and to whether that time was enough to comprehend the country as a whole, he says, “It is quite impossible to understand the essence of India in a visit, the country is a multi-cultural hotspot and I only took in a small layer of what it had to offer. But that was enough for me, in a way, to understand the silk route and the underlayers of the relation of Qatar and India.” 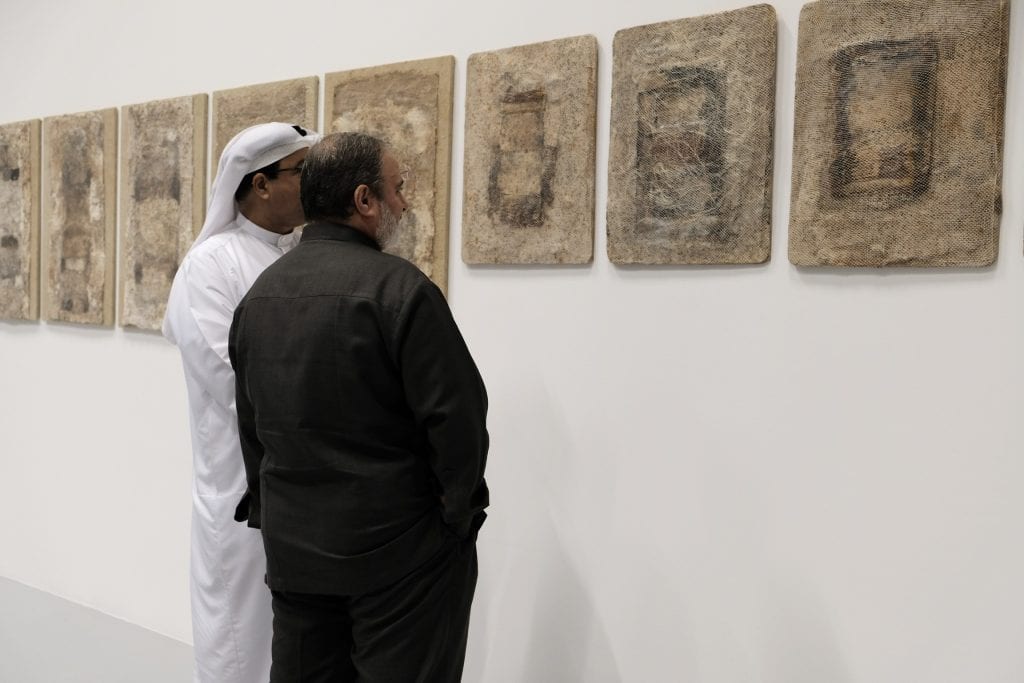 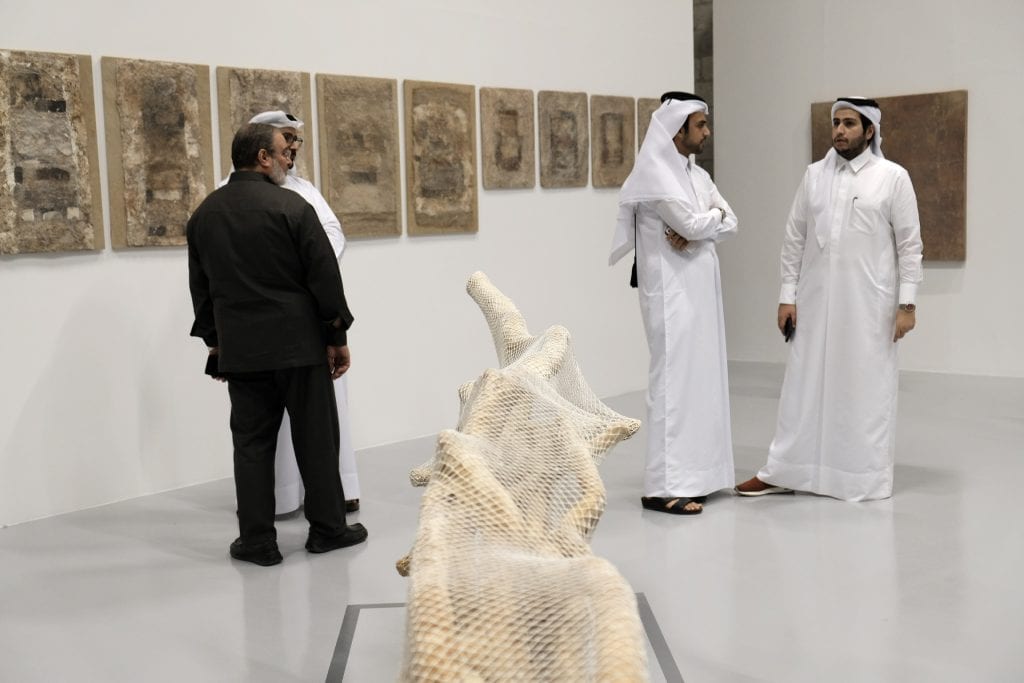 Faraj scanned the museums in Mumbai and later went to Kochi as “the connect of this southern state to Qatar is quite strong and dates back to the glorious pearl trading era when the boats were made in Calicut and transported via sea to Qatar,” according to Faraj. In Kochi, Faraj was mesmerized by the Chinese Fishing Nets; not only by the visible gigantic fishing net that remains a quintessential image of Kochi with its fishermen community who form the backbone of the social fabric but also the invisible stories, which he comprehends as part of the silk route trade that included in its path the Middle East, India, and China. 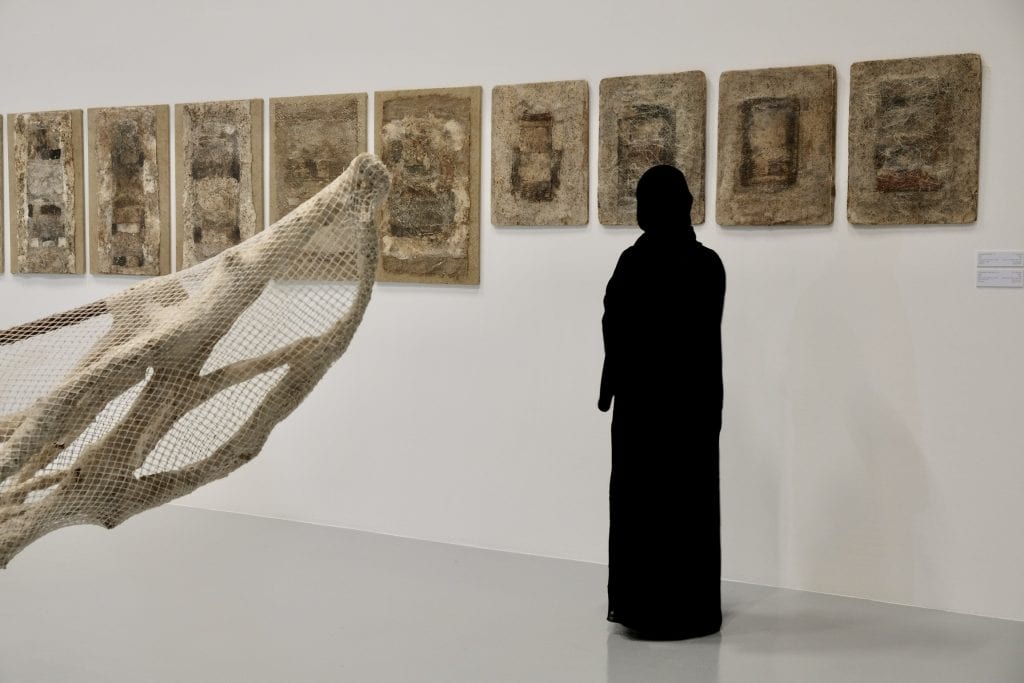 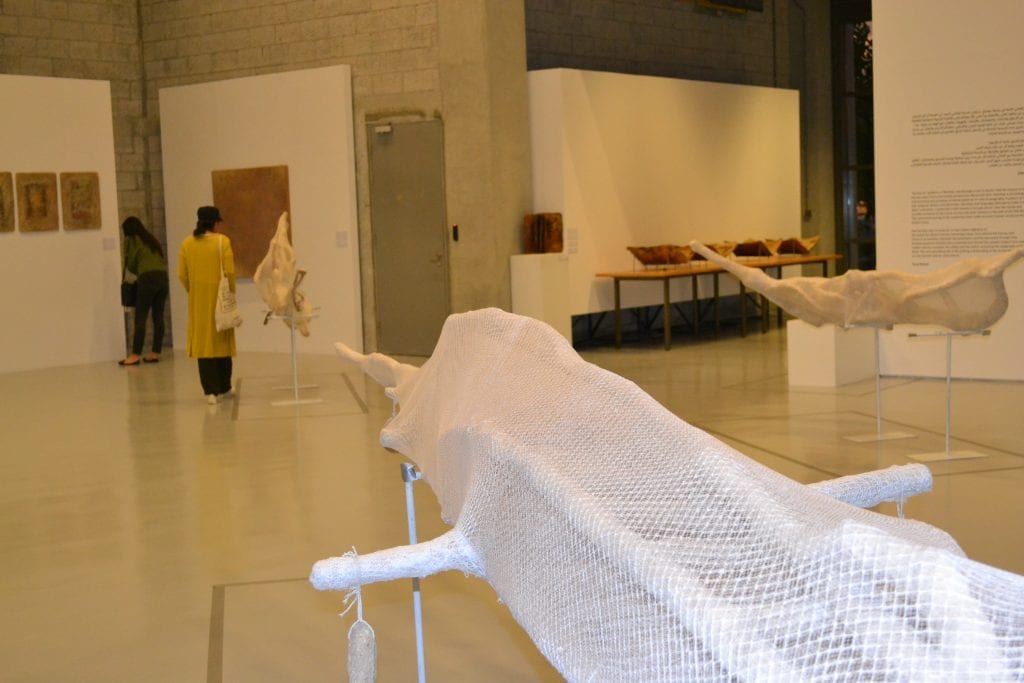 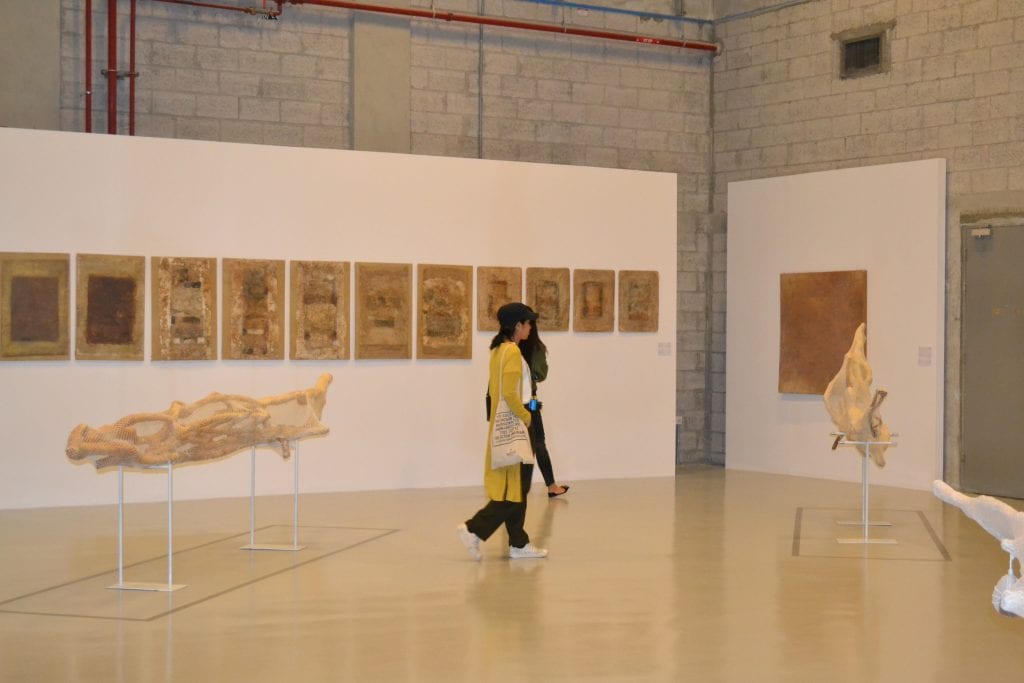 “Legend has it that a famous Chinese explorer introduced the Chinese Fishing Nets to the fishermen in Kochi over 500 years ago. Even though years have passed by since he left, the fishing nets have become a staple sight and is one major tourist attraction,” says Faraj.

Faraj’s exhibition thus addresses the concept of historical concealment and exclusion through a qualitative approach between what is visible and what is real. During his residency, Daham relied on local tangible and intangible materials to create artworks. Such materials include the fishing nets from Kochi, which he used alongside handmade manuscripts to hide the intangibility of history. 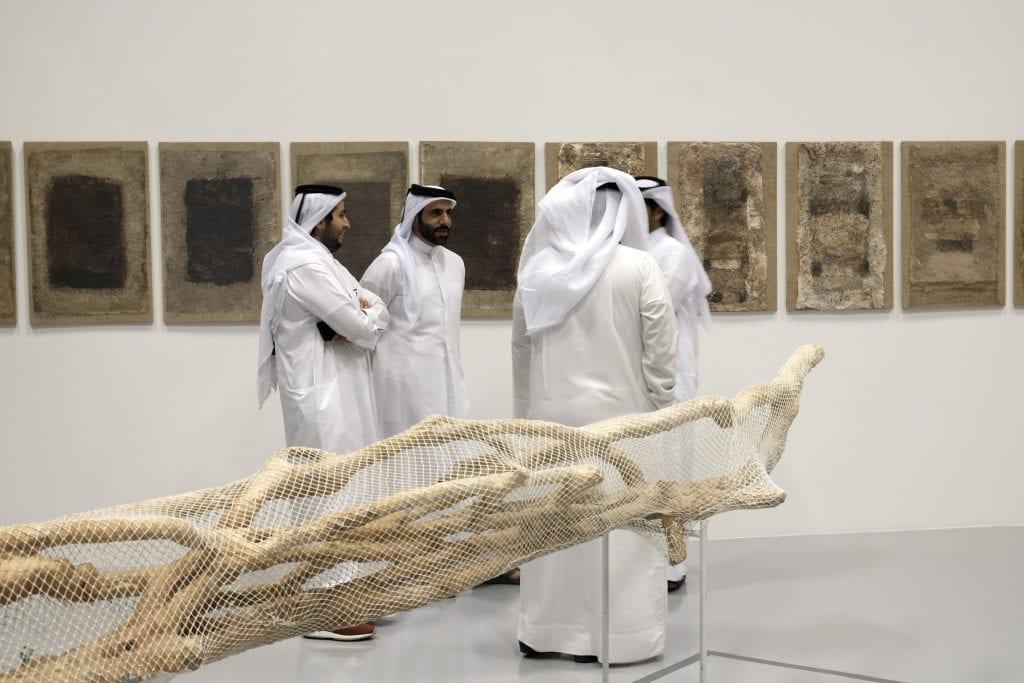 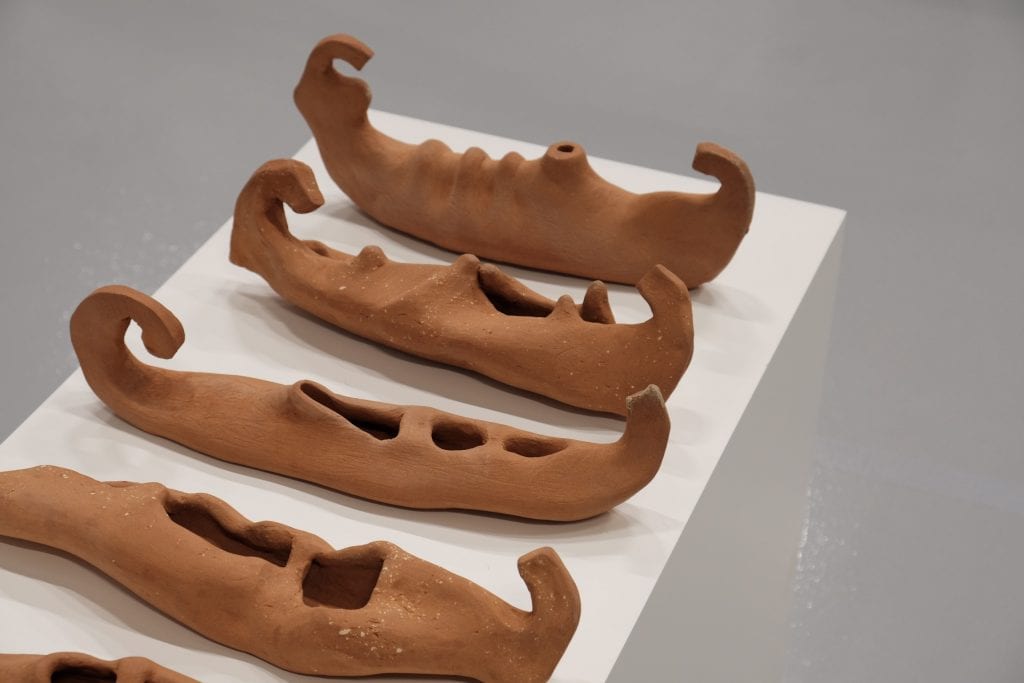 “I want to talk about something that cannot be seen; beyond the seas that connect countries, the history of what happened over the seas and how it has brought communities and connections,” he says. “The spice market is also quite strong in Kochi and using the materials available there, like the henna and some aromatic spices, I created an ink that I have used to create the manuscripts that write about these strong historical contexts that have given us so many connections.” 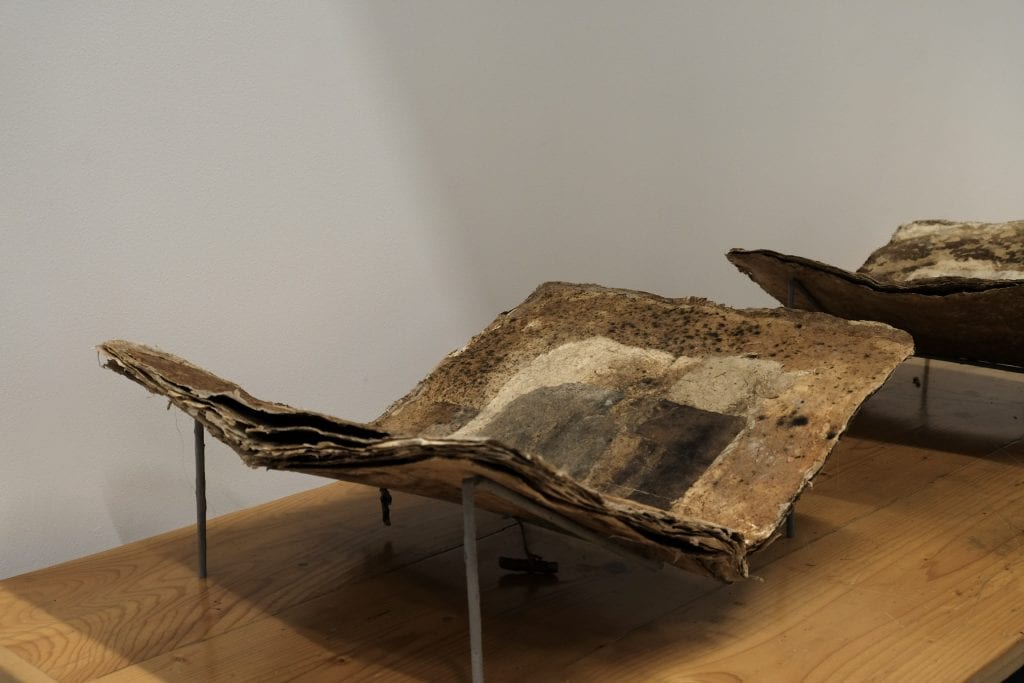 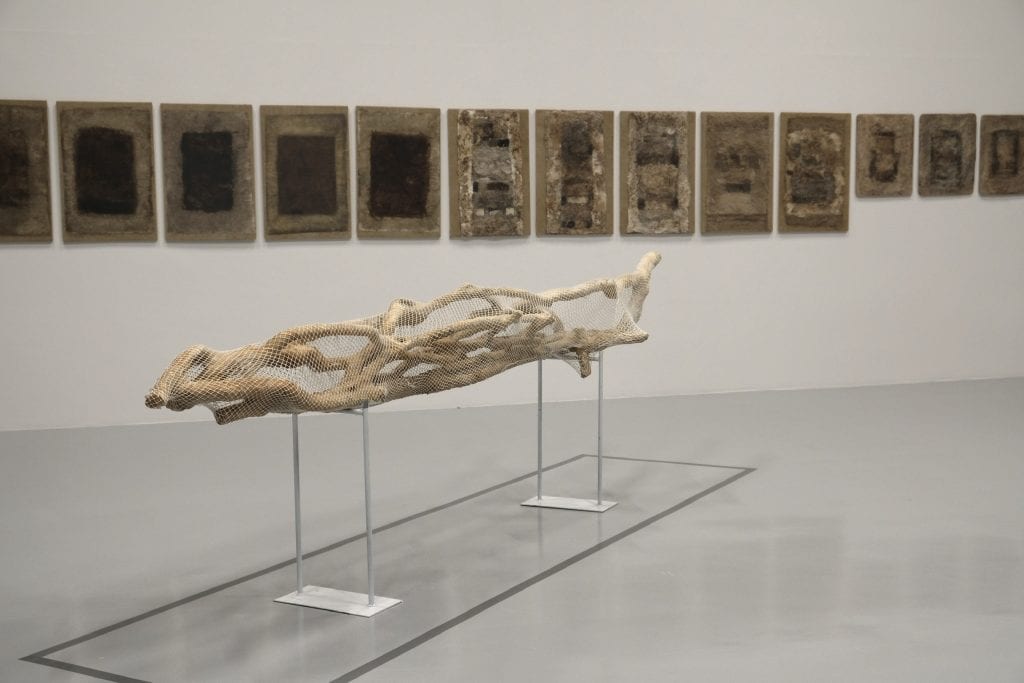 His exhibits are in multi-media, using the fishing net wrapped over wood, giving the impression of a time-wrap, that consumes the fishing nets and the boats, that seem to be stuck in an era that continues to live on, undisturbed by modern-day developments. While the manuscripts in handmade paper and inked with henna and spices take us back in history and speaks of the unseen bonds formed much earlier between countries and souls.

“This is just the beginning,” says Faraj, “Maybe I will travel yet again to India to complete my project. There might be more stories to develop and work on.”

Daham’s contemporary work is inspired by the transformation of the world around him and responds to the rapid changes experienced in Qatari society. His work has been displayed at Katara, Mathaf, QM Gallery Al Riwaq, and Al Markhiya Gallery, among others. 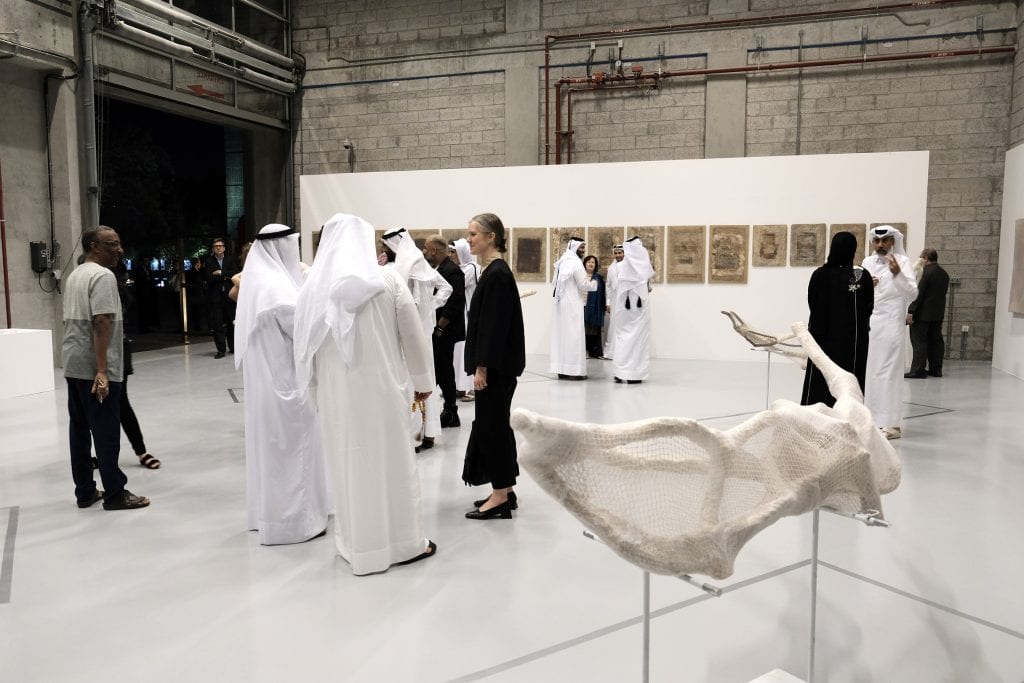 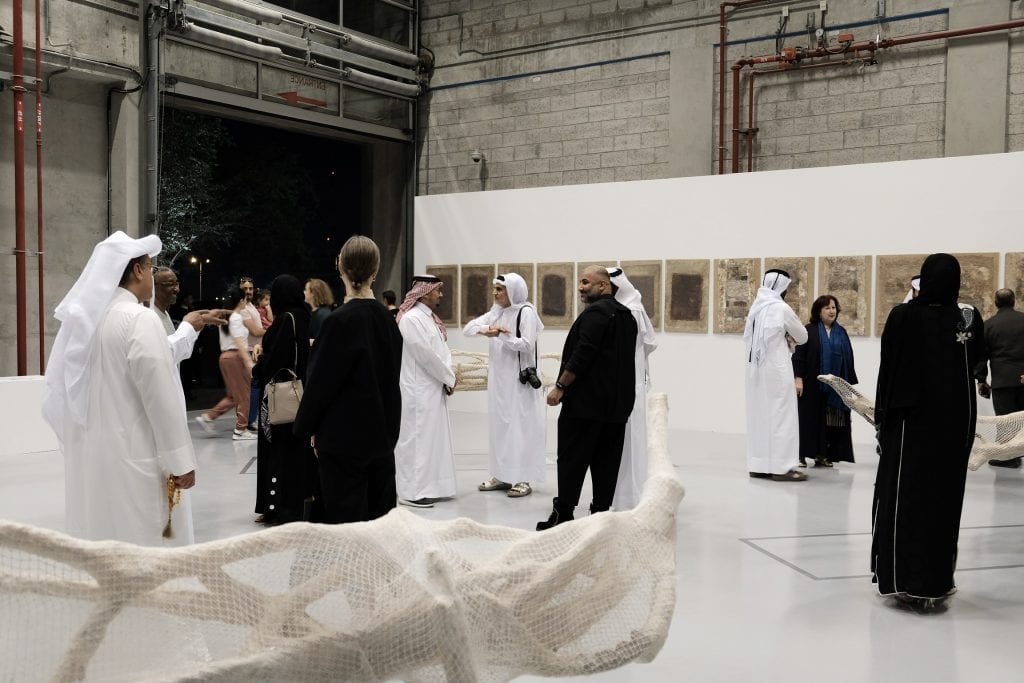 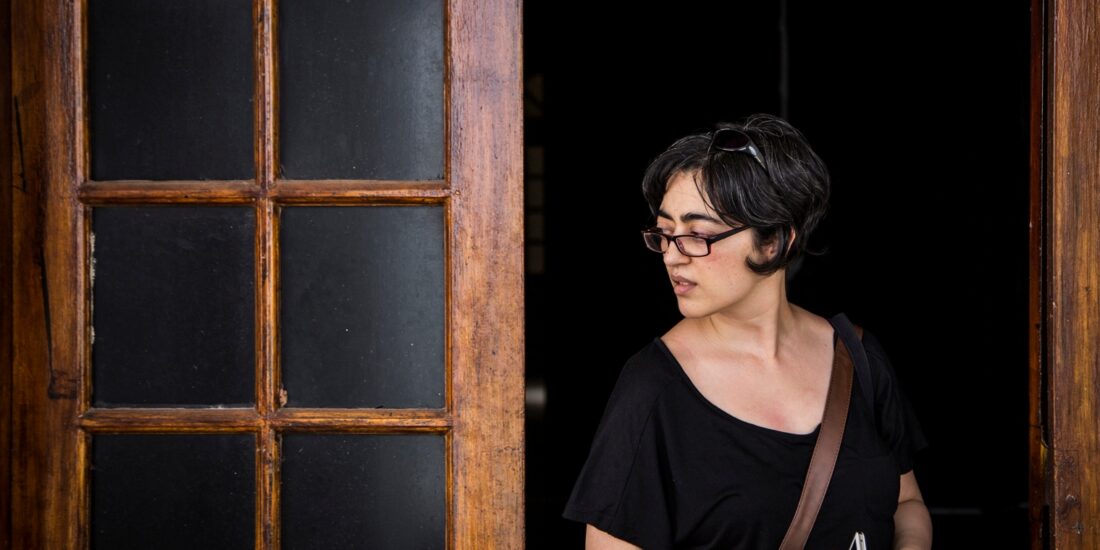 The underlying theme of the 5th edition of Kochi Muzris Biennale: In our Veins Flow Ink and 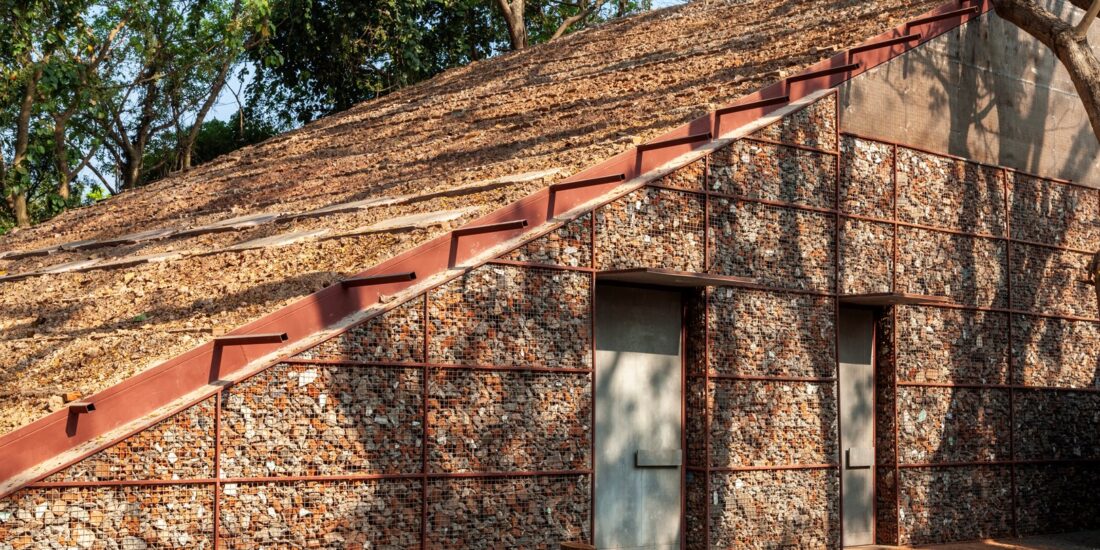 The Biennale Pavilion is Made from Debris

The Kochi Muzhris Biennale 2022-2023 is an event that brings people, students and artists from around the 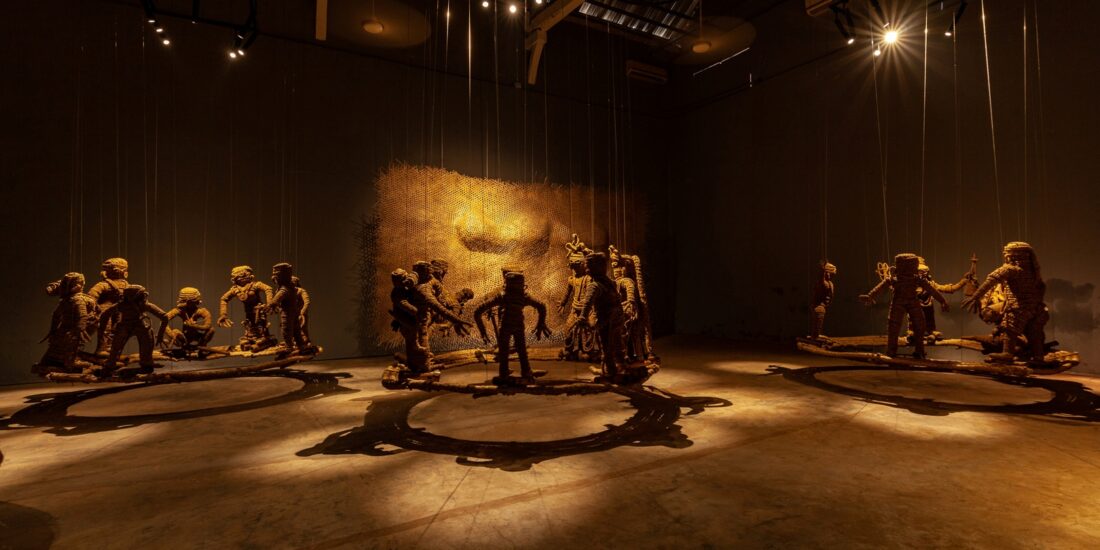 Bhumi: A Story of Survival

SCALE puts the spotlight on Bhumi, an Invited Programme at the 5th edition of the Kochi Muziris