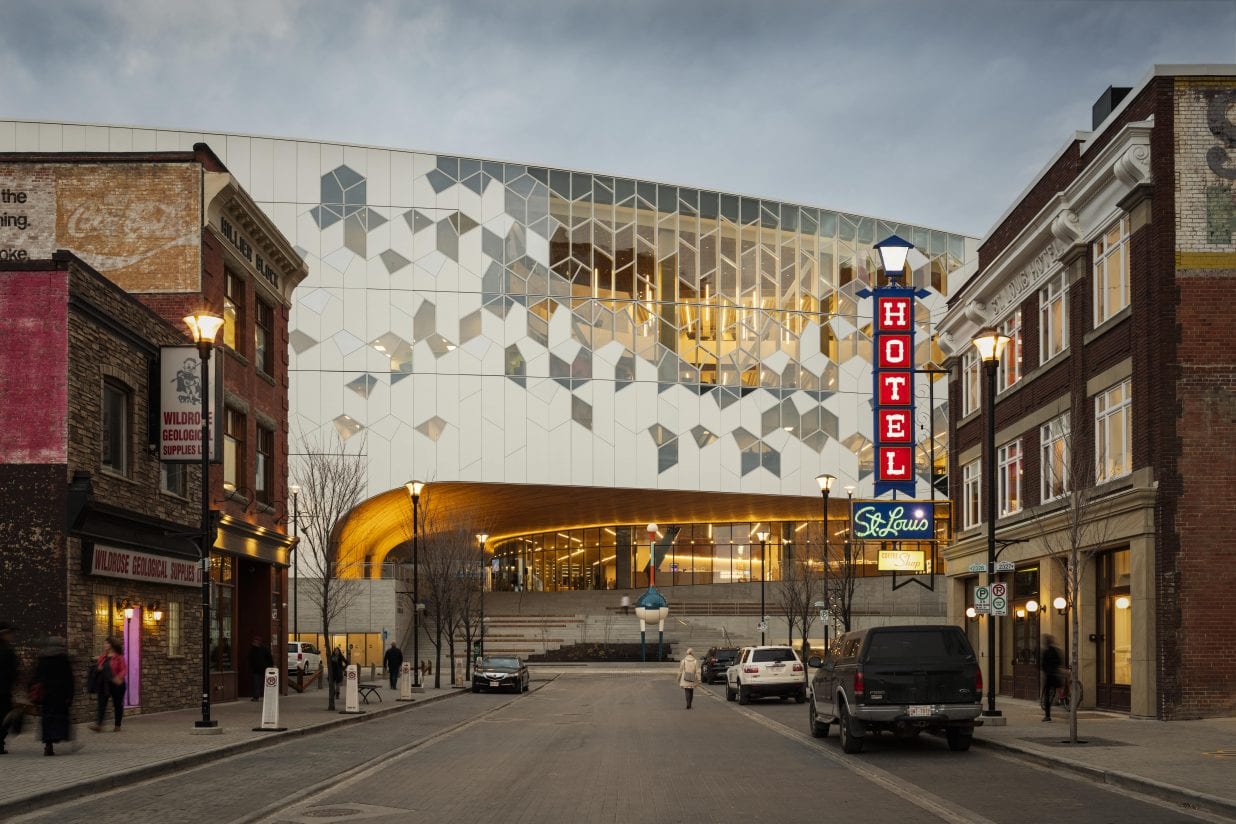 Snøhetta– and DIALOG-designed new Central Library in Calgary, provides spaces for all types of people and activities—for social interaction and exchange, for studying and learning, for quiet and introspection—championing the unique civic function that libraries provide today. 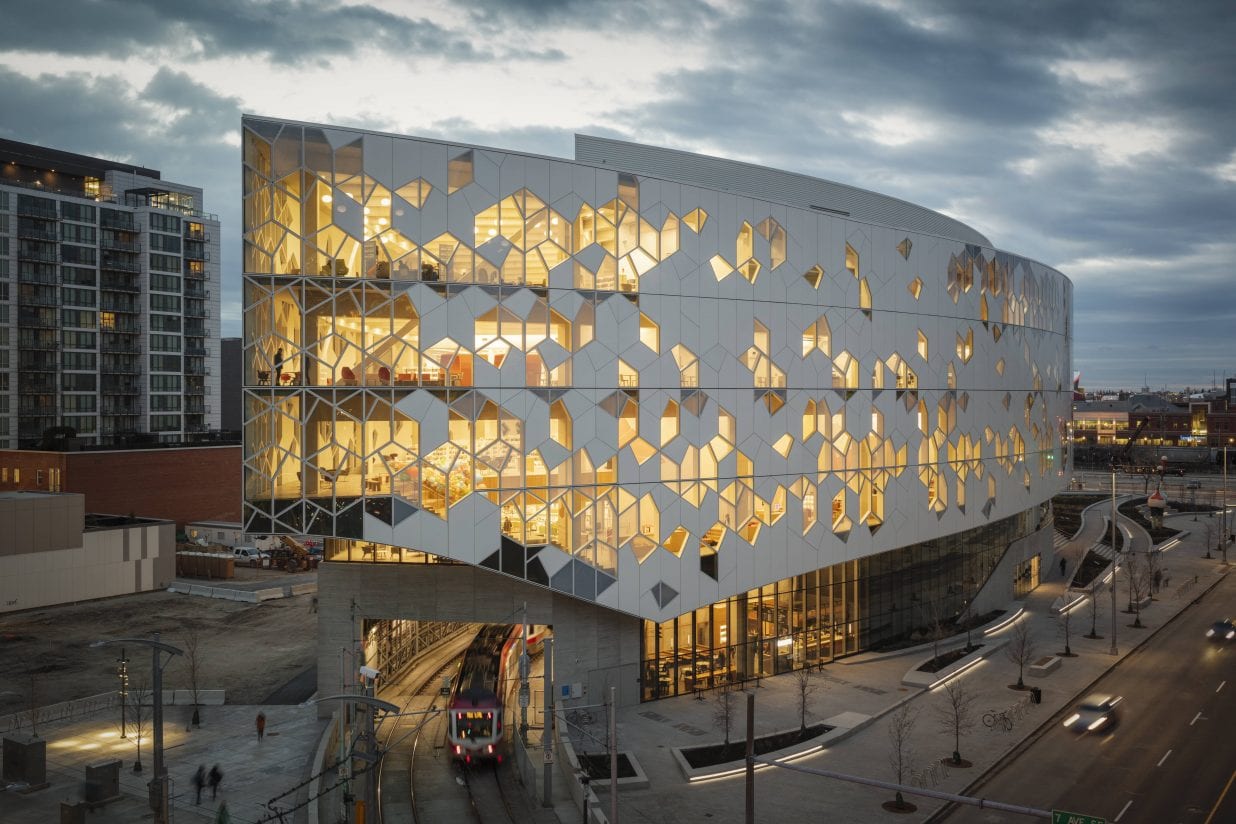 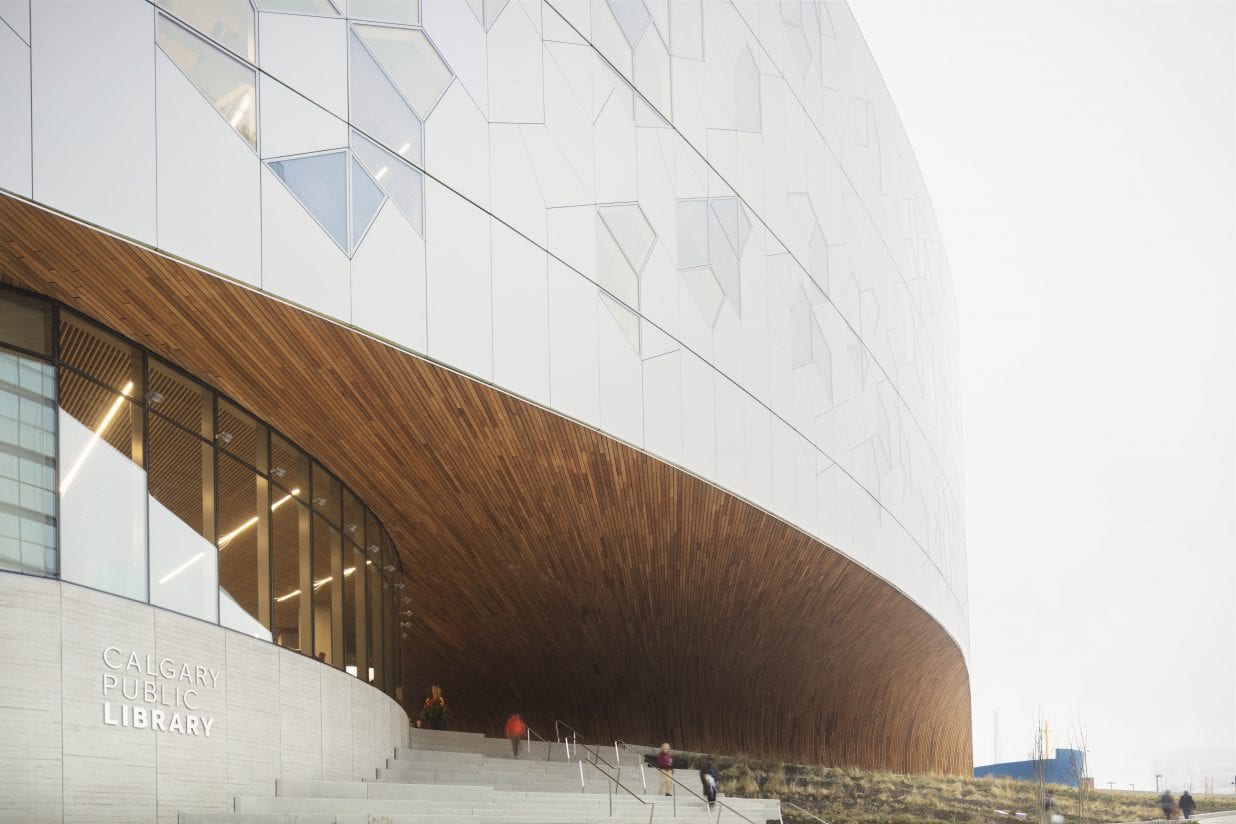 With aims to welcome over twice as many annual visitors to its 240,000 square feet of expanded facilities, the library will fill a vital role for the rapidly expanding city. As Calgary’s largest public investment since the 1988 Olympics, the library signals the beginning of a new chapter in the life of the city, one centered on the creation and innovation of knowledge and culture.

Calgary Public Library is one of the largest library systems in North America, where more than half of its residents are active cardholders, and accordingly, the new main branch was created for and inspired by its diverse inhabitants. 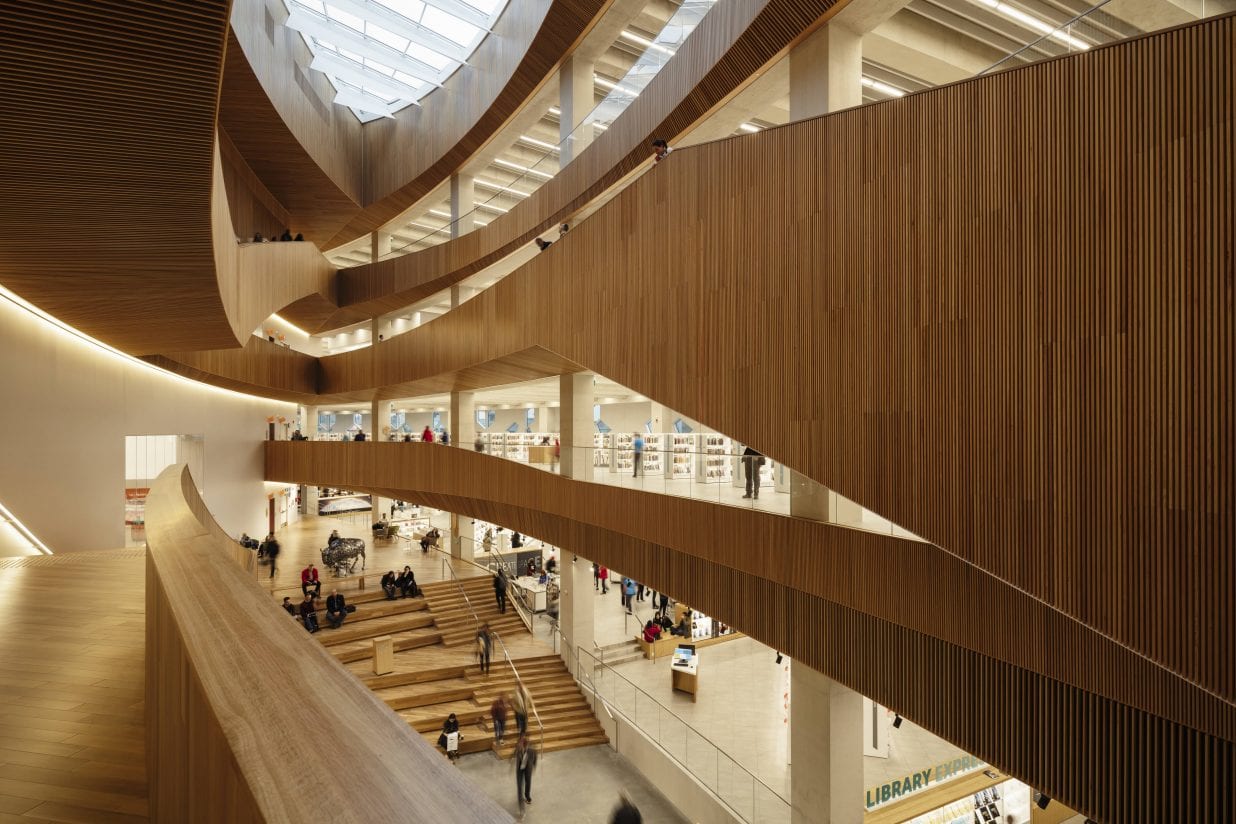 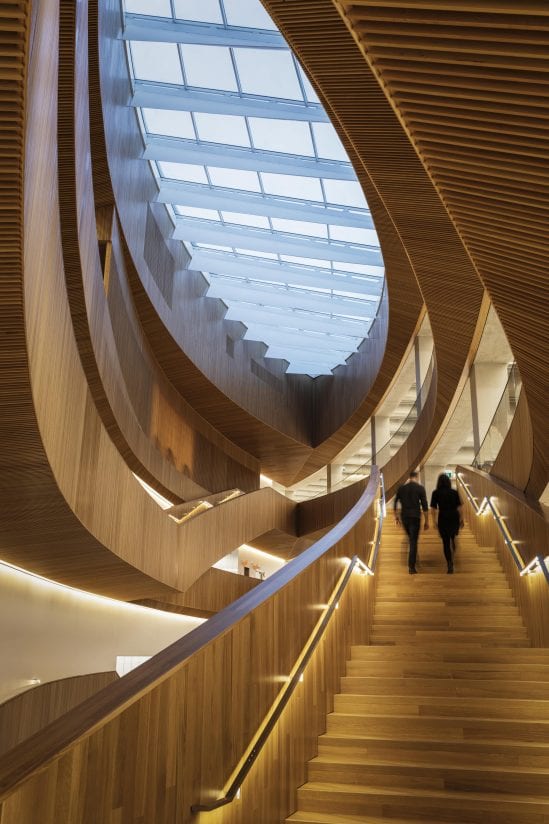 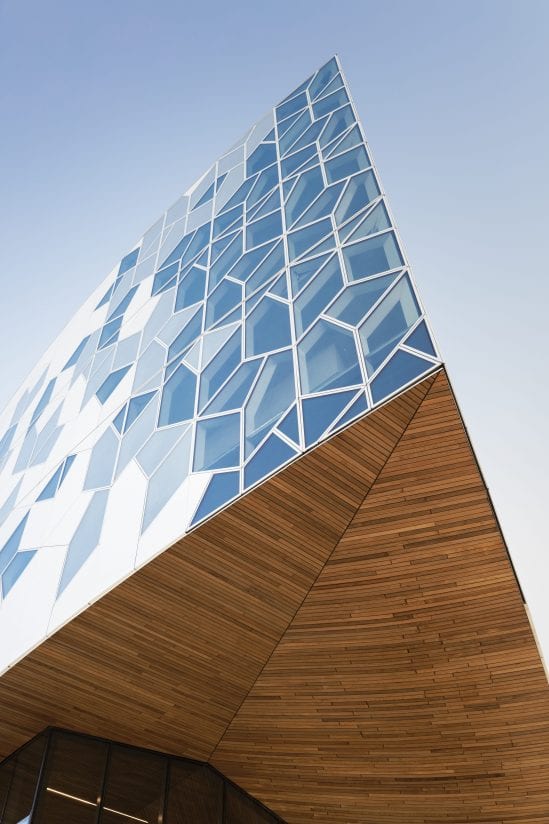 The building is sited within a complex urban condition, where a fully operational Light Rail Transit Line crosses the site from above to below ground on a curved half-moon path, dividing Downtown and East Village. In response, the design lifts the main entry over the encapsulated train line. Gently terraced slopes rise up to the heart of the building, allowing for people arriving from every direction to interact with the library. Outdoor amphitheaters nestled into the terraces provide places for people to sit and for library programs to spill outside. Plantings that reference the native landscape draw Calgary’s mountains and prairies into the cityscape and line the plaza’s surrounding streets with elms and aspen trees. Doubling as a portal and a bridge, the entry plaza heals the previously-split seam between the two neighborhoods and re-establishes visual and pedestrian connections across the site. 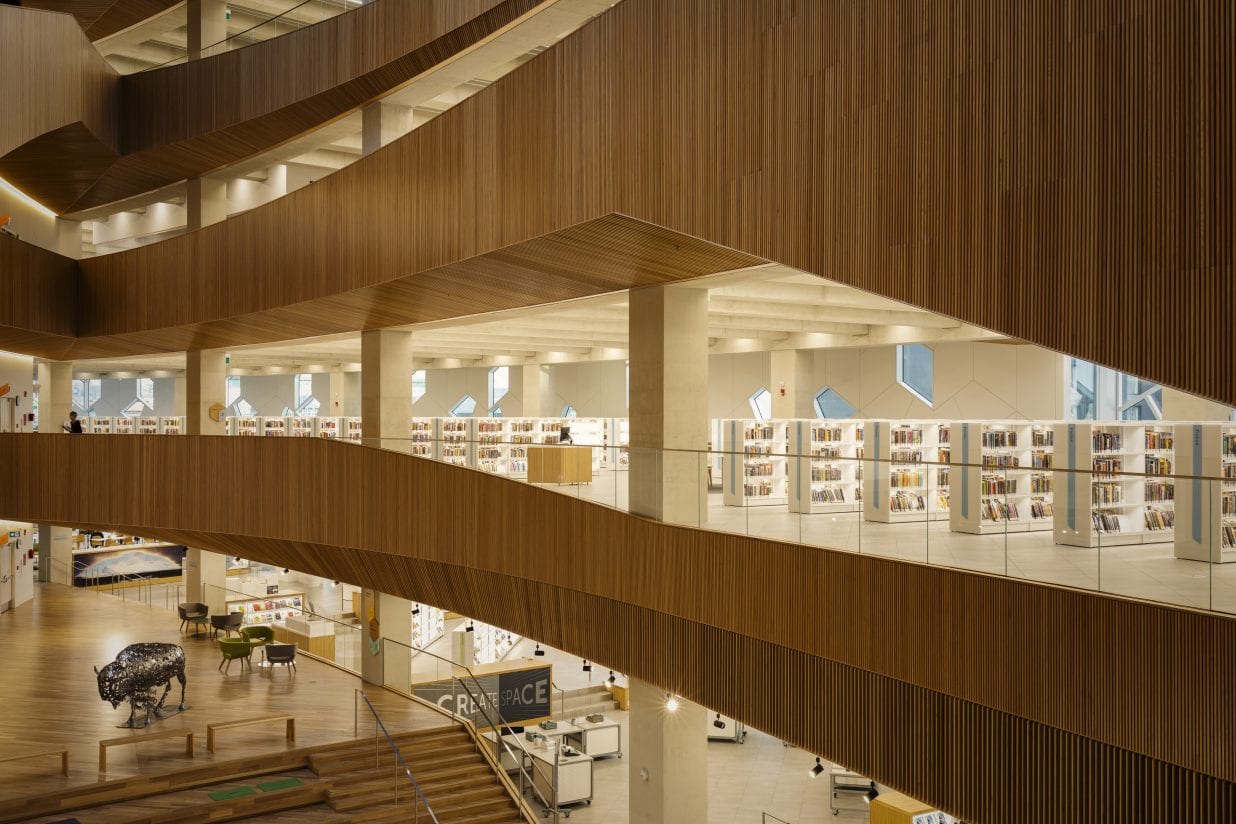 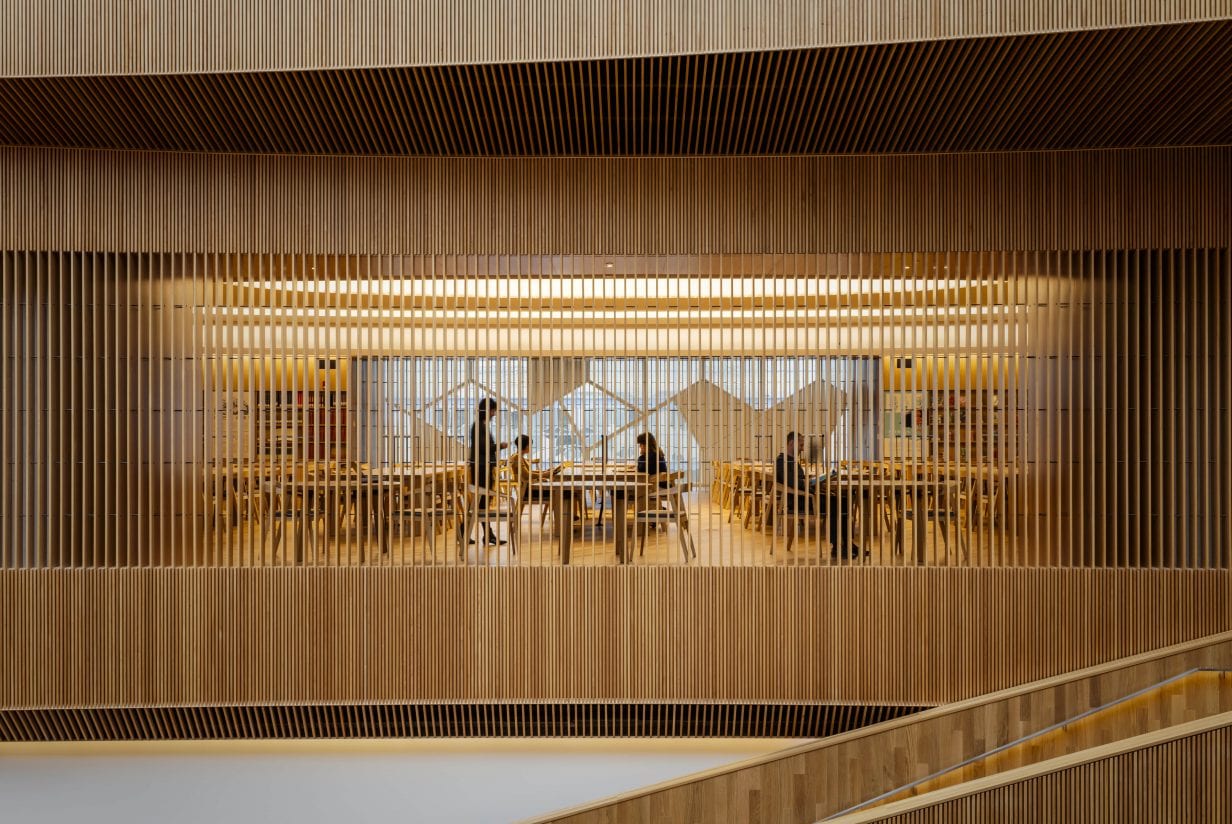 The dynamic, triple-glazed façade is composed of a modular, hexagonal pattern that expresses the library’s aims to provide a space that invites all visitors. Aggregated variations on the hexagon form scatter across the building’s curved surface in alternating panels of fritted glass and occasional iridescent aluminium. From these shapes emerge familiar forms: Parts of the pattern might resemble an open book, snowflake-like linework, or interlocking houses, anchoring the ideas of the collective and community. Most importantly, the entire building volume is enclosed in the same pattern, allowing all sides to function as the “front” of the building. This visual vocabulary continues inside, expressed in the design of CPL’s new visual identity and wayfinding signage in the building, unifying the library’s goals of inclusivity. 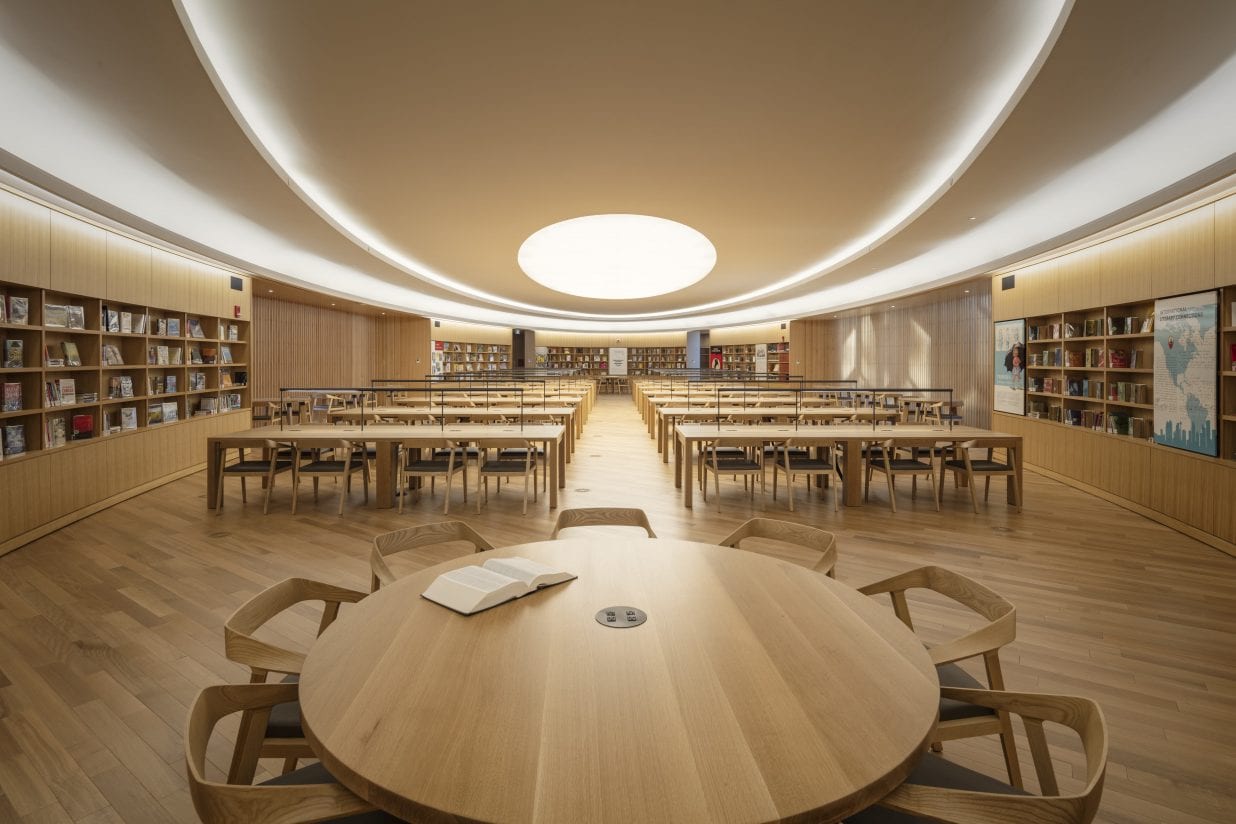 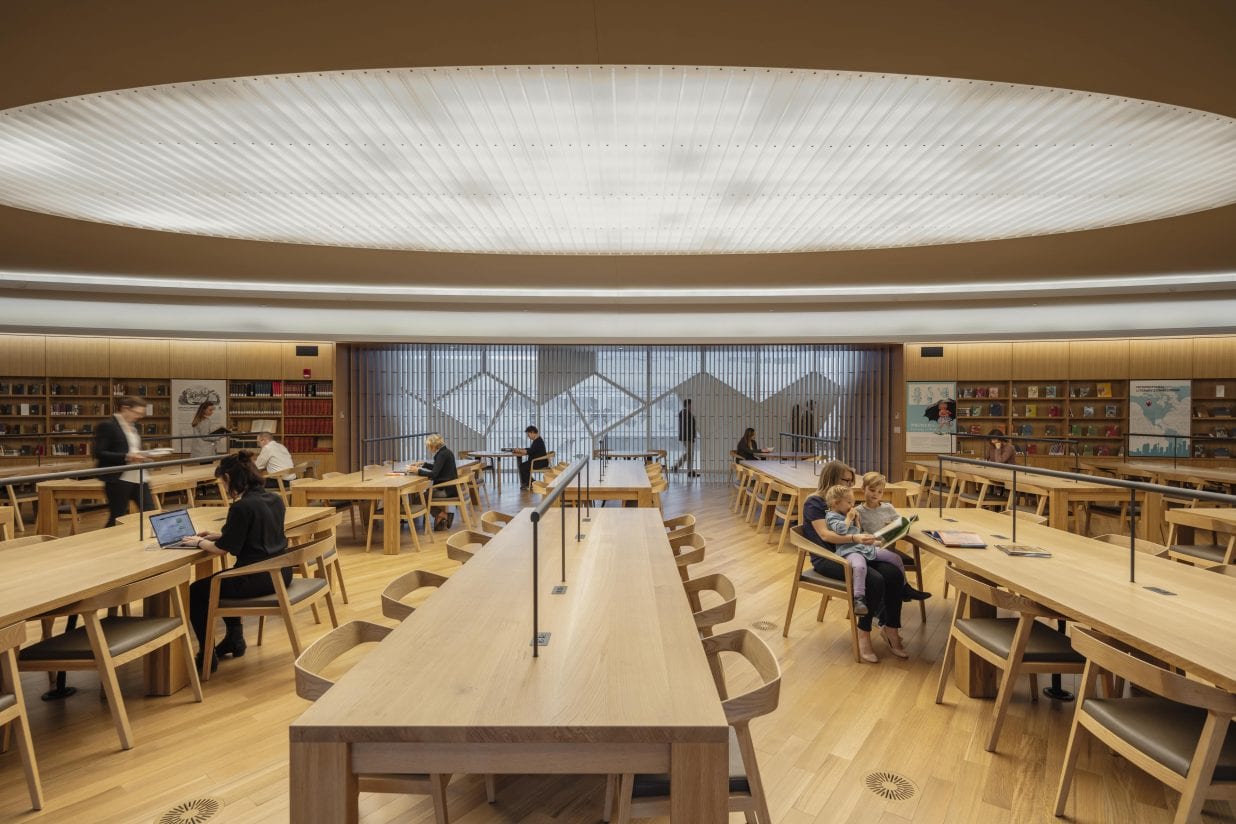 The crystalline geometry of the façade is carved away to reveal an expansive wood archway that embraces visitors as they approach. Framing the entrance of the building, the form references the Chinook cloud arches common to the region. Created entirely of planks of western red cedar from nearby British Columbia, the double-curved shell is among one of the largest freeform timber shells in the world. Its organic form and texture bring the large building down to a tactile, intimate scale. Visible from the outside of the building is the main atrium, inviting people in. 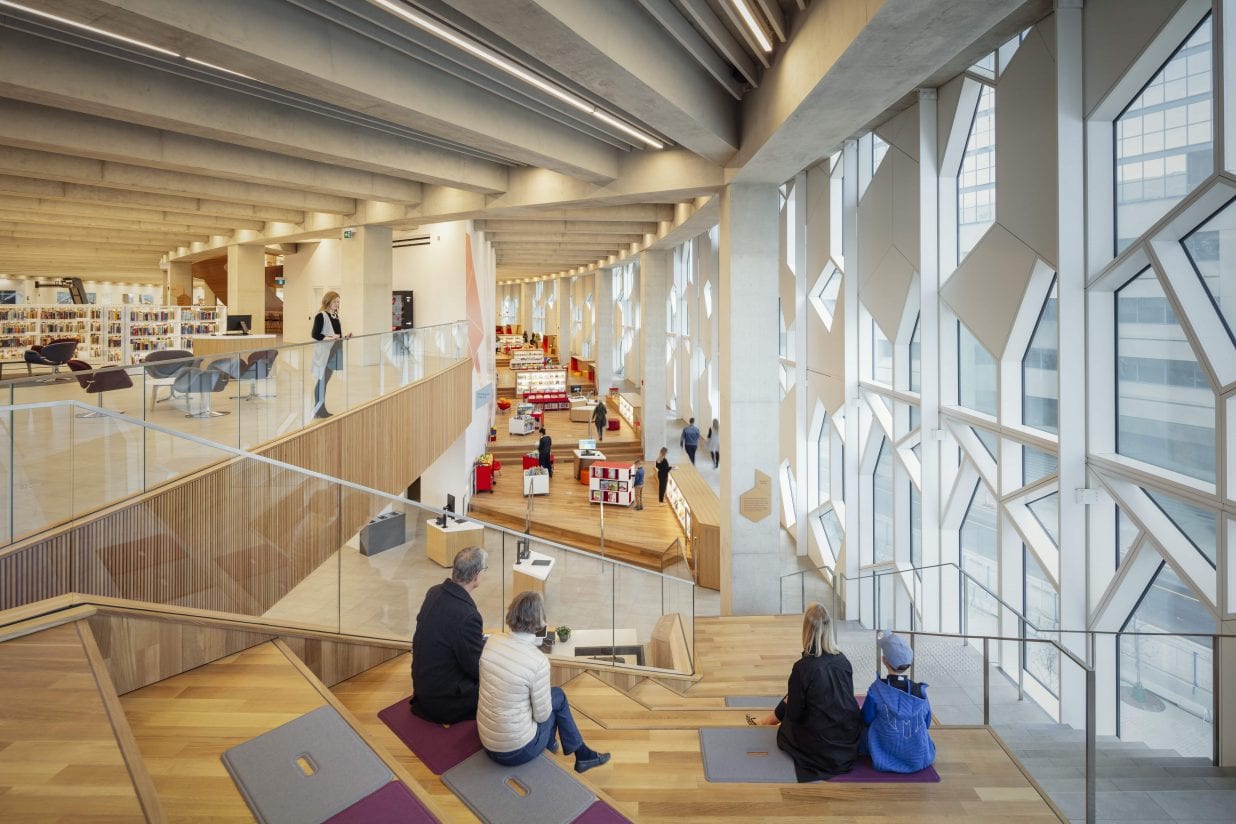 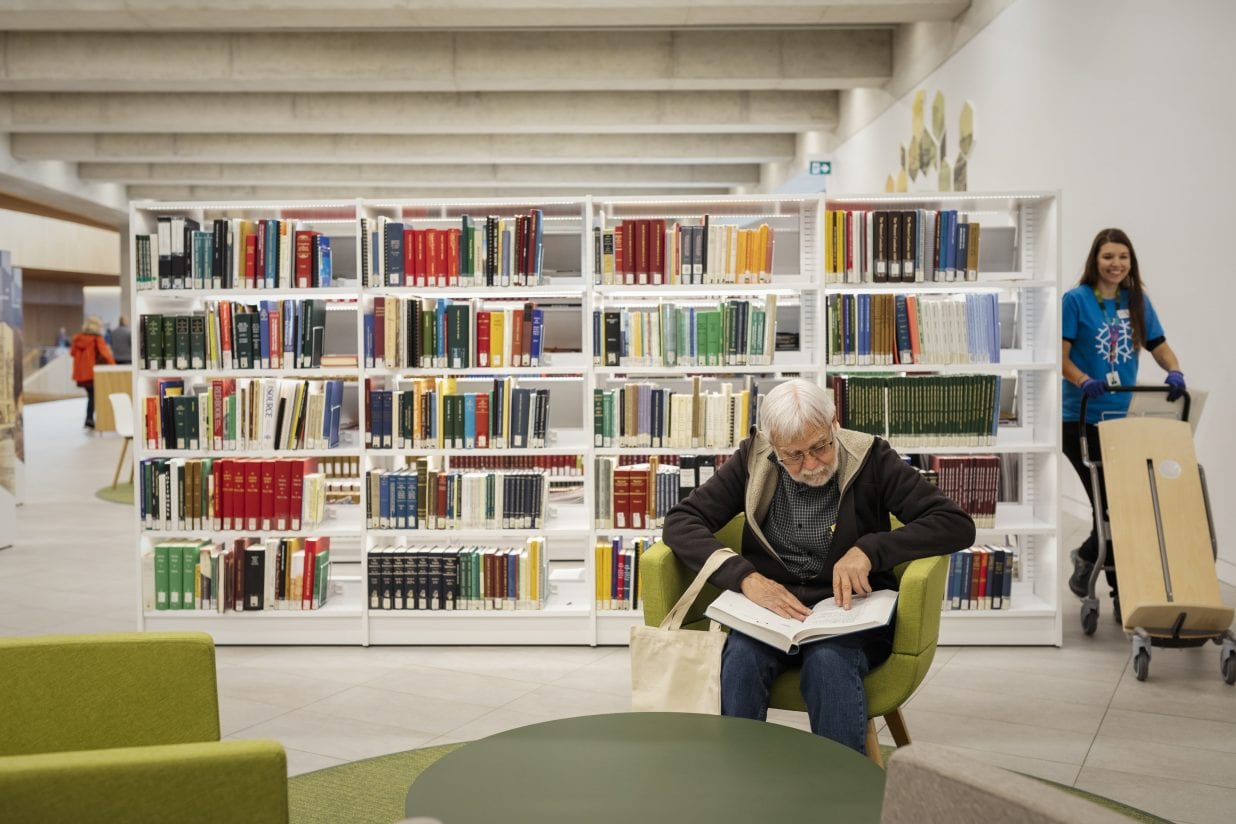 As the archway continues into the lobby and atrium, the wood spirals upwards over 85 feet to a view of the sky through the oculus. Wood slats line the perimeter of the open atrium, shaped in plan like a pointed ellipse, serving as an orientation device for people to quickly grasp the circulation and organisational logic of the library. Inside, the concrete structure is left exposed and unfinished, hinting at the open-ended possibilities within. The rhythm of beams and columns are reminiscent of a stoa, the public, open-air colonnades of ancient Greek architecture that doubled as spaces of gathering and intellectual exchange. The rawness of the material palette is intended to give people the sense that a library is a place of engagement, rather than a sacrosanct repository for books.

Organised on a spectrum of ‘Fun’ to ‘Serious,’ the library programme locates the livelier public activities on the lower floors, gradually transitioning to quieter study areas on the upper levels as one spirals upwards. At the street level, a series of multi-purpose rooms line the perimeter of the building, enhancing the connectivity between inside and outside. On the ground floor, a Children’s Library offers playhouses that provide space for crafts and drawing-based activities, early literacy programs, and full-body indoor play experience. 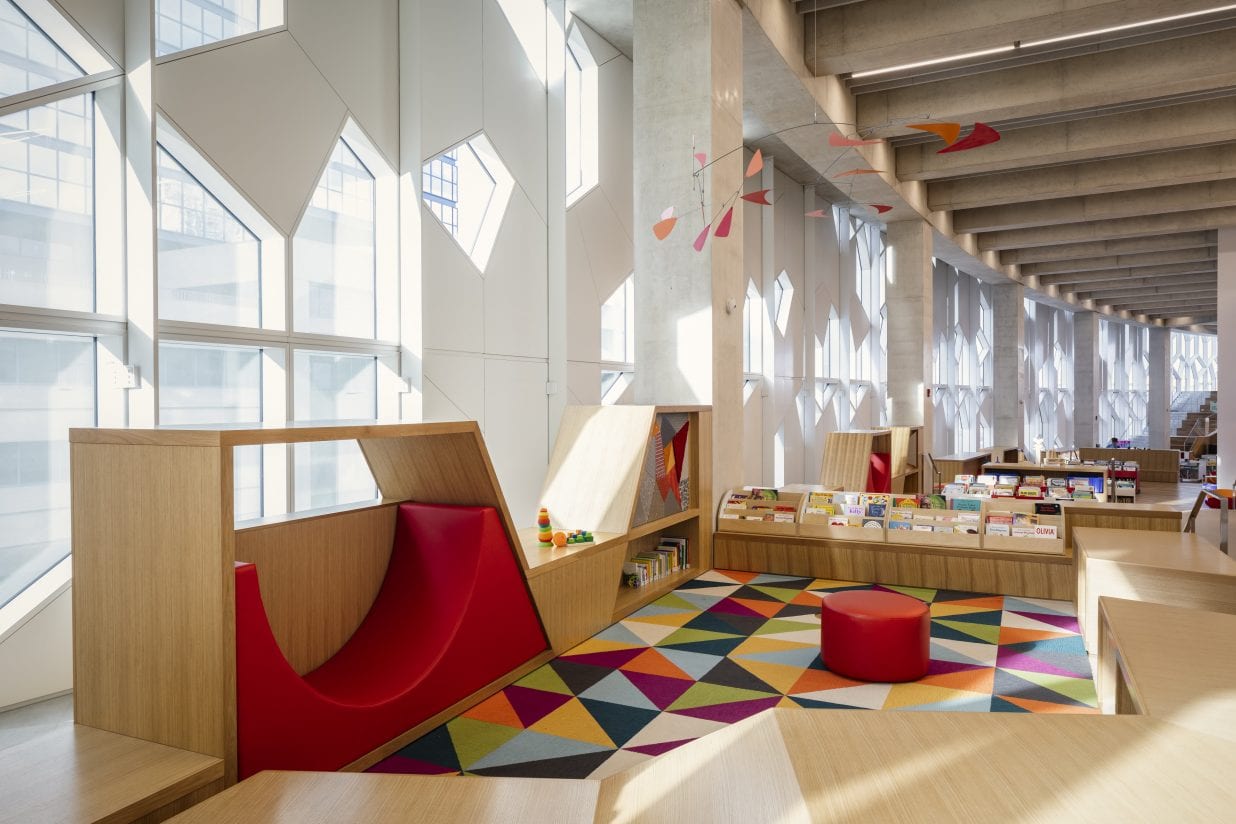 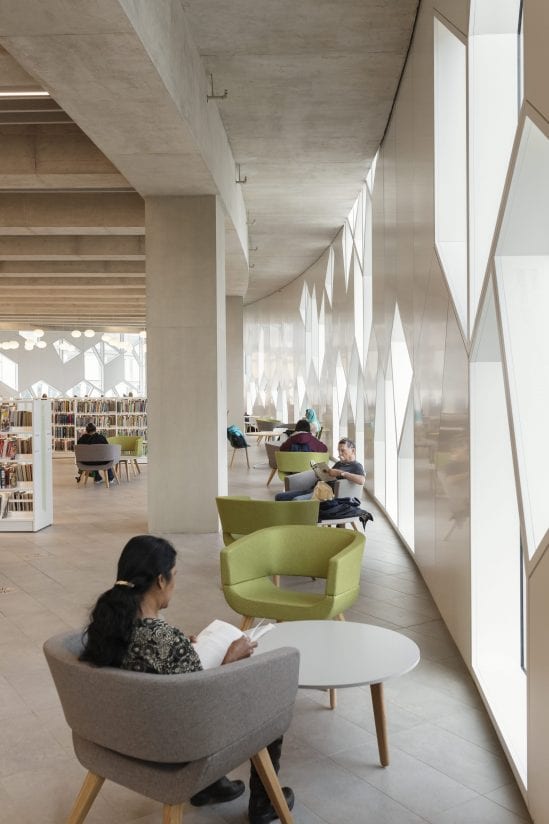 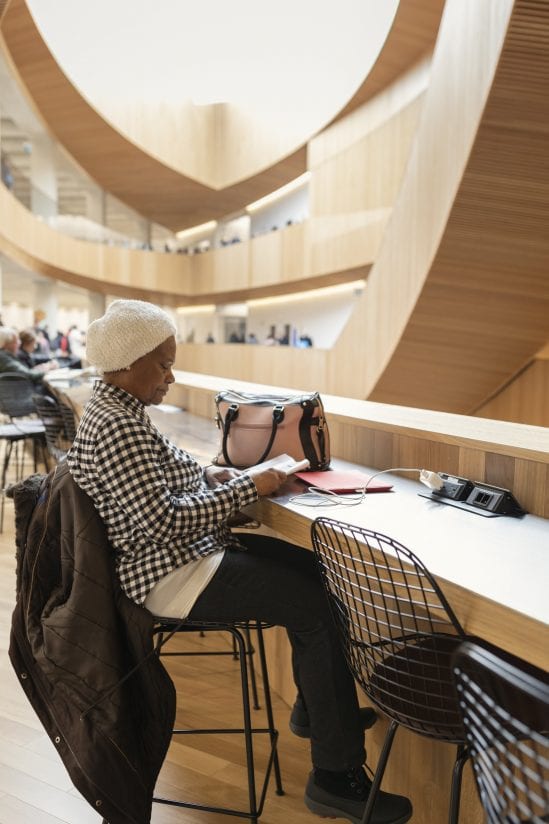 Throughout the six floors, a variety of spaces provide for digital, analogue, group, and individual interactions. At the uppermost level of the library is the Great Reading Room, conceived as a jewel box tucked within the library, which provides a space for focused study and inspiration. Readers enter through a transitional space with softened light and acoustics. Within, vertical wood slats line the space to provide both privacy and visibility, defining an interior space without using solid walls. Natural light illuminates the space through the wood slats creating glancing sightlines between the atrium and western façade. 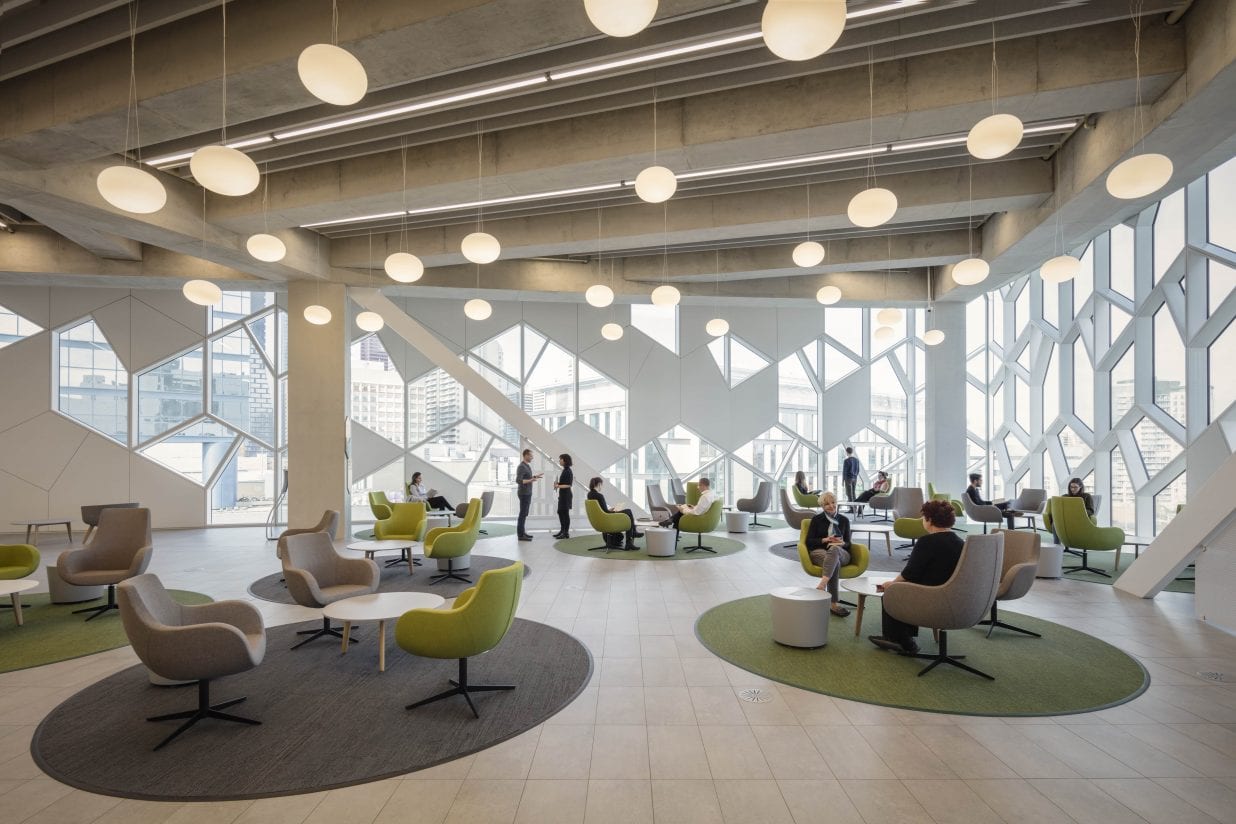 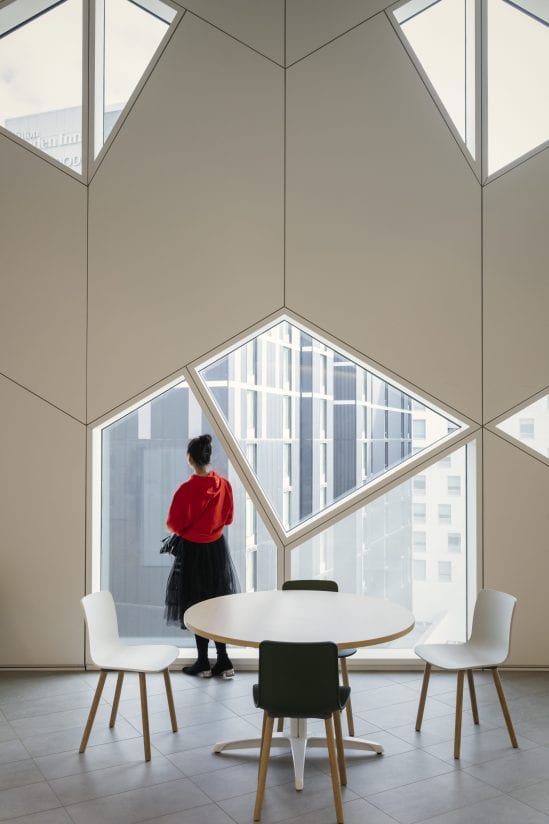 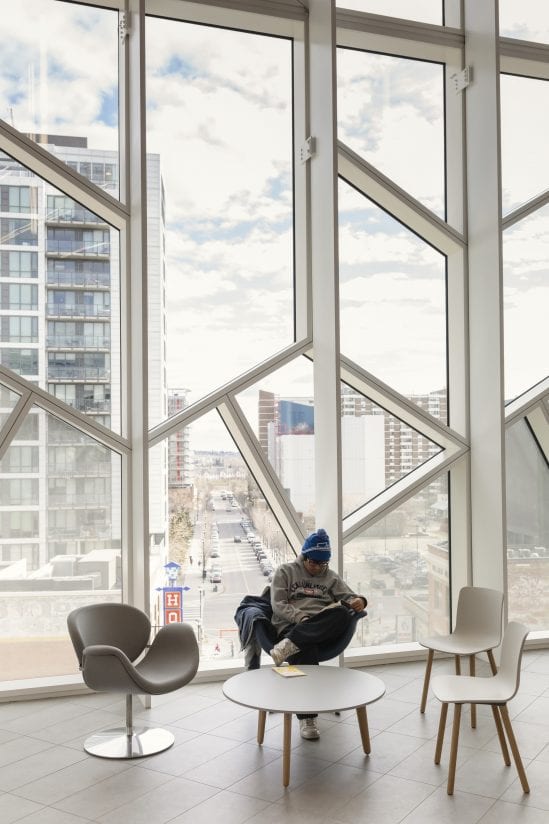 Arriving at the northernmost point of the library, one finds oneself at the Living Room, overlooking the train line and the meeting point of the two neighborhoods. Filled with light and activity, this prow of the building will not only serve as a beacon to those outsides, inviting them to enter, but also as a prospect for looking back out – a fitting vantage point to observe the impact of a building that hopes to re-energise the spirit of culture, learning, and community in Calgary.

The Calgary Public Library system is actively used by over 670,000 Calgarians (over half of its 1.2 million population) and plays a major role in connecting residents from all walks of life. Accordingly, the new Central Library was catalysed by a significant public engagement process. A series of programmes were held in 2012, where more than 16,000 people provided input for what they hoped to see in the Library’s role within the community and its function. In 2013, CPL and CMLC hosted an international design competition to select the architecture and landscape architecture team to realize the Central Library. The Snøhetta- and DIALOG-designed library reached substantial completion in July 2018, was handed over to Calgary Public Library in September, and opened on time and on the budget to the public on November 1, 2018. The new Central Library will join Studio Bell, the Arts Commons, and the Glenbow Museum as part of a burgeoning cultural campus in downtown Calgary and the East Village. 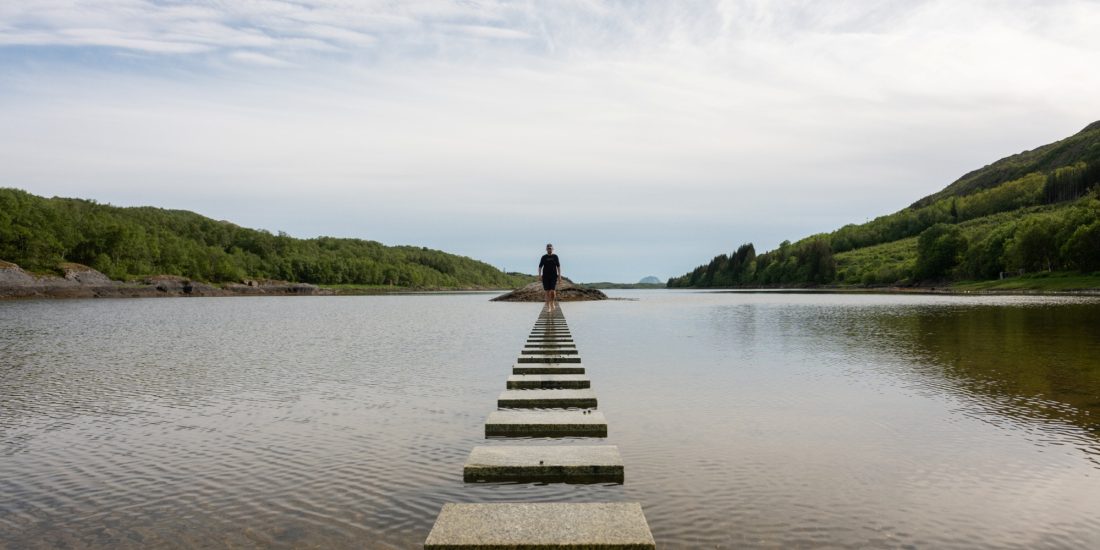 Interventions to Pause and Experience 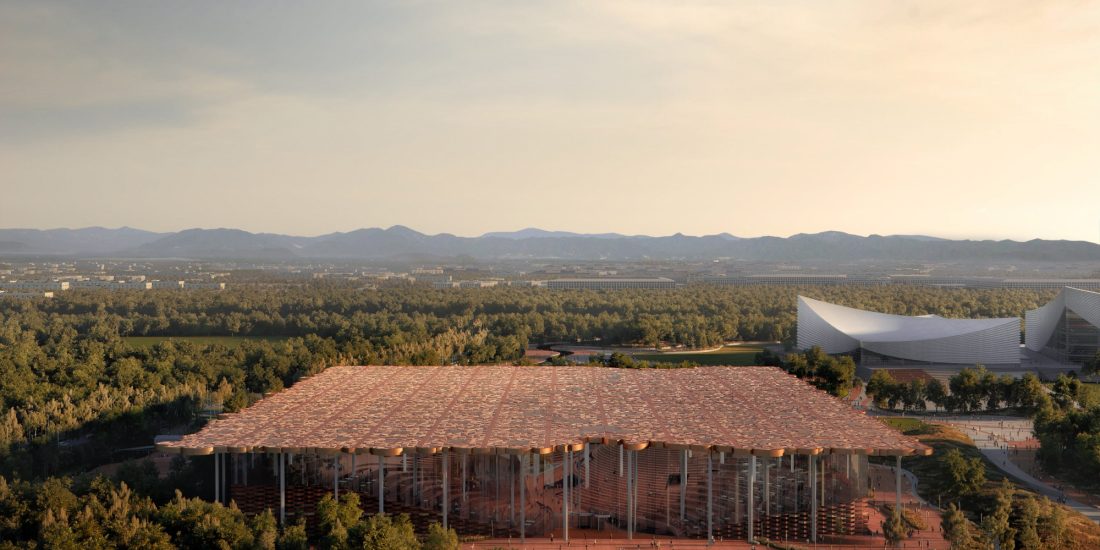 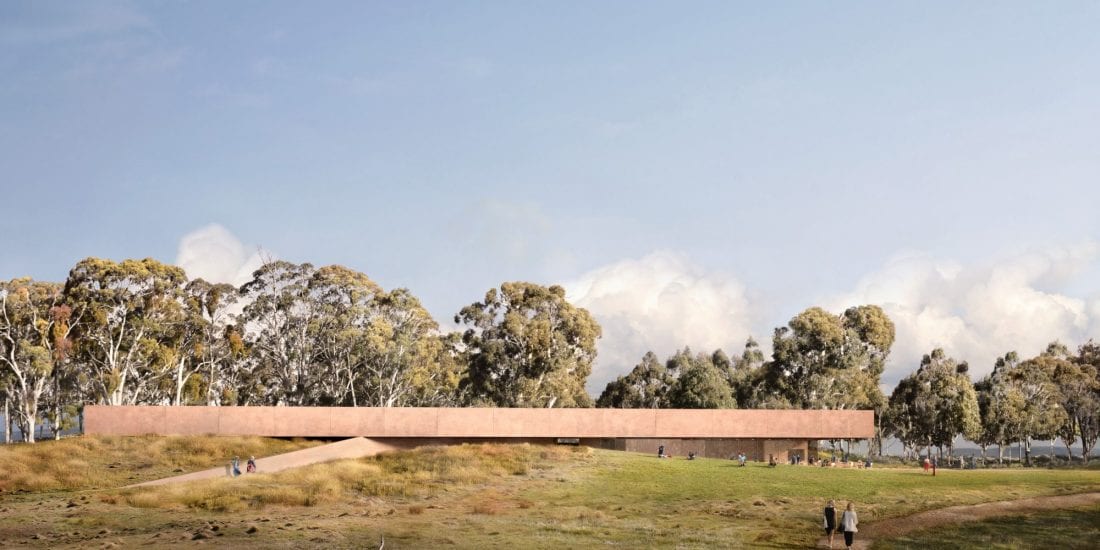 A Rammed Earth Building to Honour the Heysens in Australia