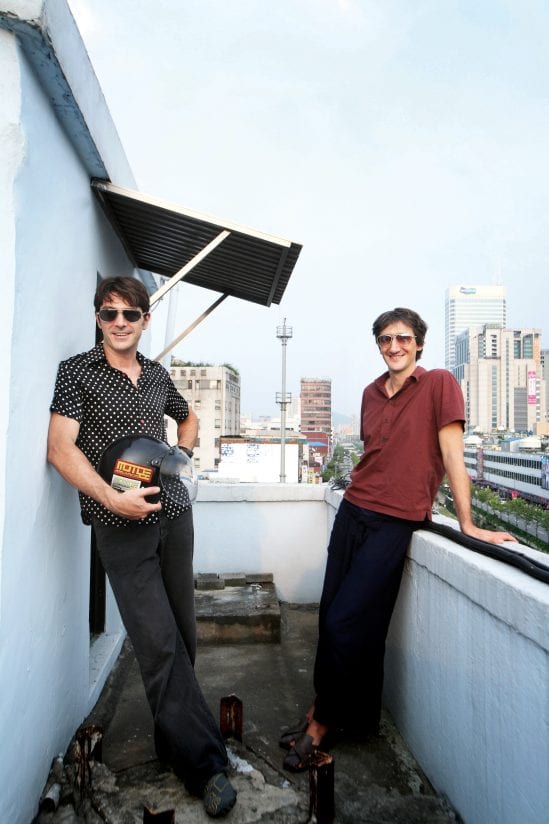 Scale puts the spotlight on another Professor from the Virginia Commonwealth University in Qatar, Marco Bruno, who is also the founder of Motoelastico, “the best Italian Architecture Office in Korea”. If that sounds pretentious, it is simply because they ARE the only Italian firm in Korea. By Sindhu Nair

Marco Bruno is a motorcycle enthusiast. The motorcycle love is not just a hobby for the love of the feel of rain and wind on the face, but to help Marco understand the city he lives in and design accordingly: “Motorcycles for us are not only means of transportation, but real exploration tools constantly supporting our research. The city becomes accessible and smaller when explored through a motorcycle.” 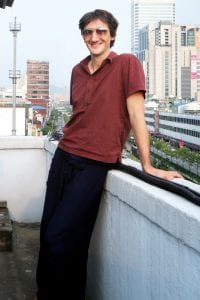 “Our goal is to challenge local cultures through unexpected combinations of original ingredients.”

His move to Korea in 2001 was to teach at the University and simultaneously set up an architecture branch office there with his friend, Simone Carena from Italy. Motoelastico, as his architectural firm is called, is interested in culturally relevant projects and as he takes us through his projects, we realise that the firm hasn’t shifted from the initial predilections.

“Even if the projects are small, we try to work on ventures that stir conversations or provoke questions, although then the scale is limited. It is a small practice but we have been doing quite well,” says Marco trying to be modest.

But what does Motoelastico mean?

“Motoelastico is a harmonic motion between two different realities: Korea and Italy and now Qatar, research and business, dream and reality, quality and quantity. We constantly swing between all of them without losing any of our design energy,” he says.

Thus, Motoelastico is the story of movement, of two Italians living in Korea, and sometimes in Qatar, of teaching students, of practicing architecture while being exposed to multiple point of views, all of these multiplicities embedded in the practice. The motorcycle enthusiast also brings in his love for riding to describe their portfolio of work and the name of the firm, “Motorcycles only work when they move, they are useless when they don’t: which is a great metaphor to describe our design activity.”

Explaining what he means by “culturally-relevant” projects, Marco says, “Every Motoelastico project is a new research opportunity: our goal is to challenge local cultures through the unexpected combination of original ingredients.”

Borrowed City is one such culturally relevant research conducted that has now been published as a book, a project that has travelled to Milan in 2012 to be shown as a project at the Biennale. 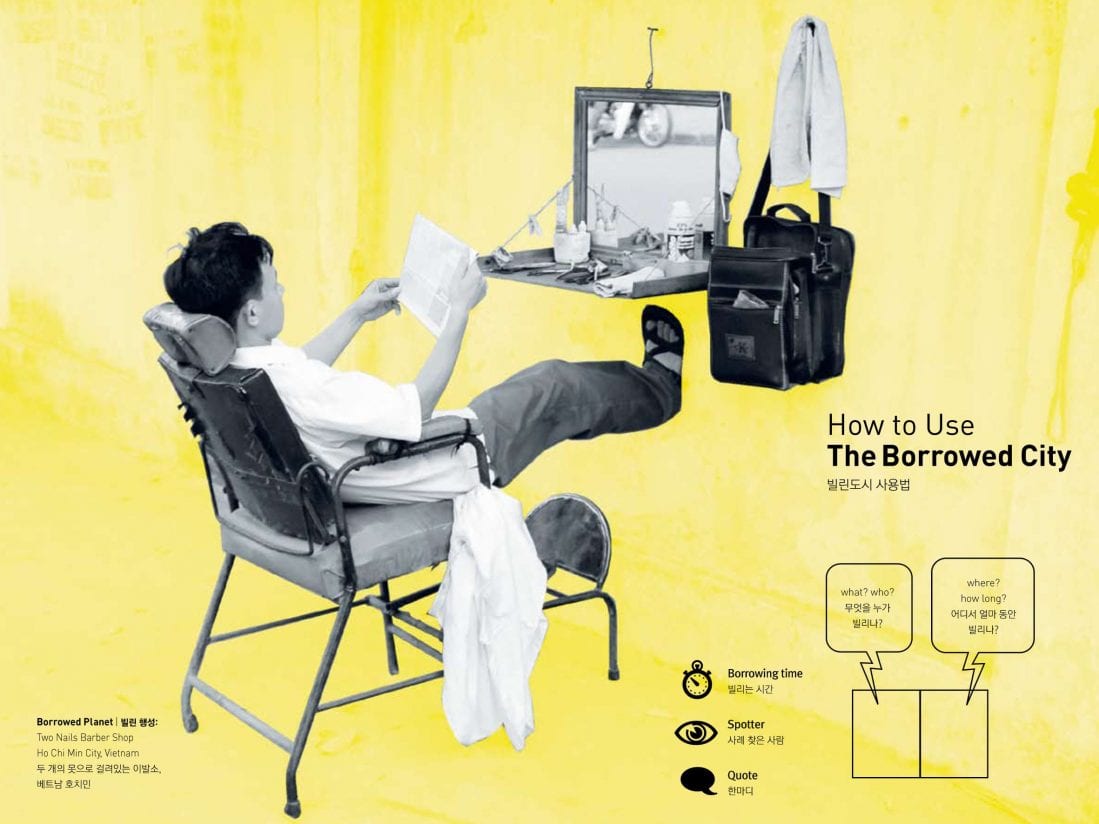 The research was to find out how the population of Korea used public space for their benefit.“As human being, we all spend a considerable amount of our lives in spaces that belong to the entire community: sidewalks, streets, parks, squares, beaches. All these spaces are by definition public and we, the citizens, use them to perform different activities: from the simplest action of just being there, to more elaborate forms of exploitation’s such as commerce or leisure,” explains Marco and in Korea, this action takes on gigantic proportions given the lack of space or the population explosion in the cities. 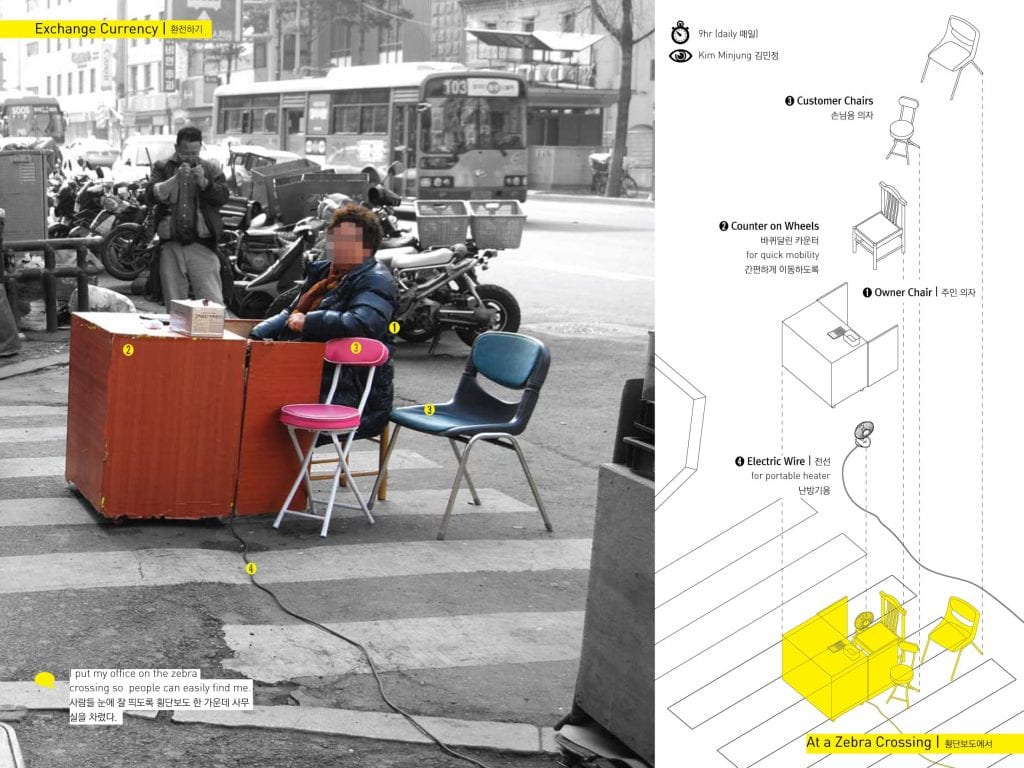 “Public spaces are limited and the amount of people using it so massive that it is impossible to implement any rules. There is a narrow demarcation between legal and illegal in the way space is used, but there is always an understanding which makes it a very humanitarian process of conducting business. Because of the limitations, the solutions are also very creative. We were fascinated by the options derived within these constraints and we recorded it all and then found our own creative solutions to space sharing in public spaces,” explains Marco.

The city is also very tolerant, as long as the space is returned back without any damage, which also demonstrates a strong sense of civic awareness.

Marco takes us through some examples that are very specific to Korea and its use of public spaces; the local barber who sets up his shop on the streets, a delivery depot on the sidewalks, use of barricades as sign boards and so on. 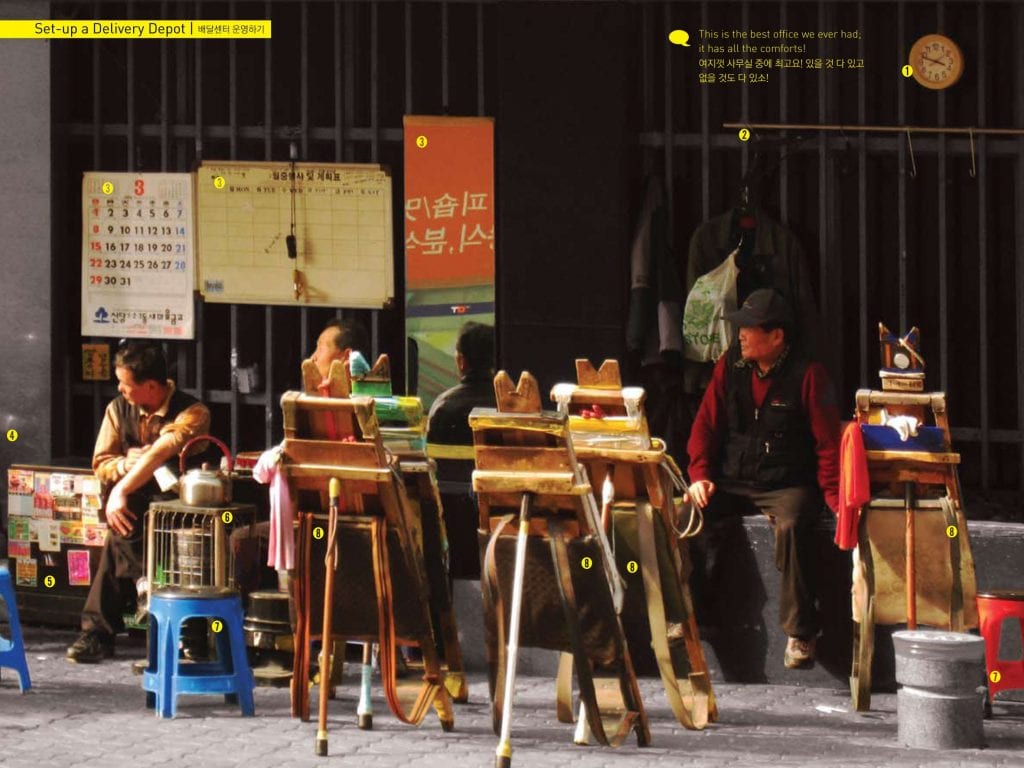 “We realized that the Borrowed City is not only a physical place, but most of all is a state of awareness: we don’t own any space we borrow it all. Borrowing space is the level zero of sharing, it is the first rule of sustainability. It is indeed a very Smart City,” he says.

“The results of the research have already been presented throughout exhibition, workshops and lectures in Korea, Italy, Thailand and Qatar. The aim is to turn Borrowed City into a global project comprising urban research, social awareness, creative transformation and innovative form of public space administration. From a Borrowed City to a Borrowed Planet.”

Borrowed City is a concept that Marco is very passionate about and he intends to continue this research in Doha and he has already found instances where this is followed in this city as well. 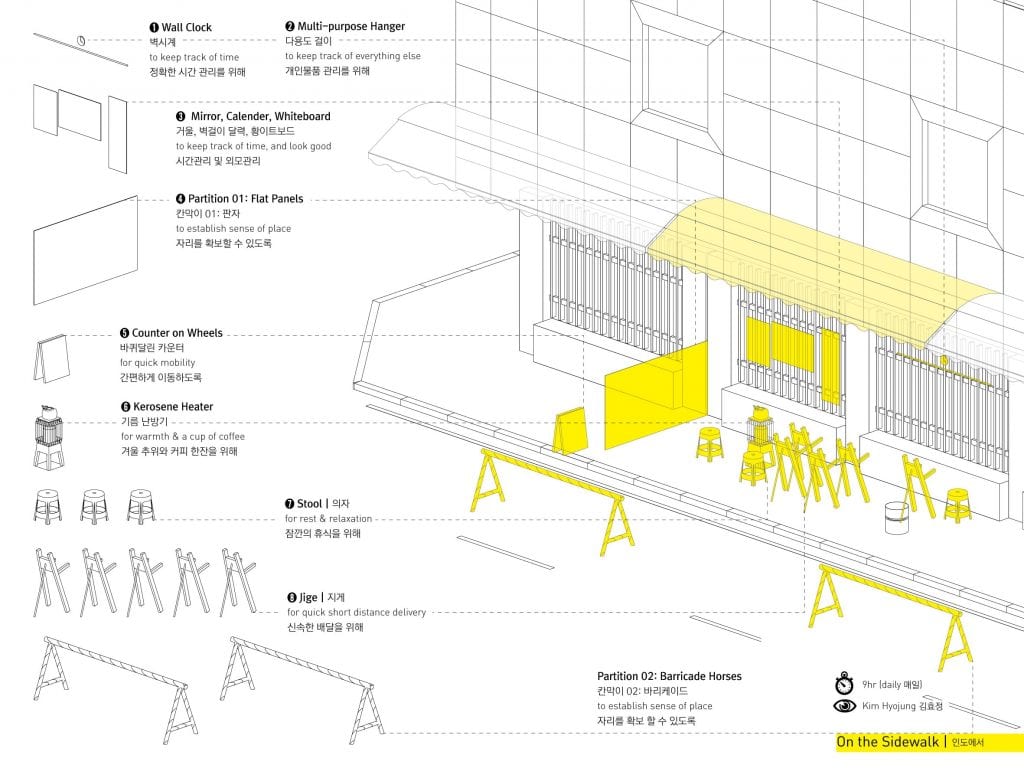 “We ran a workshop in Doha and found so many similarities of the same activity, even though we thought that the Arabic culture was more private,” he says. “The use of keeping drinking water available outside homes; the use of street pathways to display old cars. I feel it is a high sense of civic responsibility that makes you do this without harming or breaking any rules.”

This research of Motoelastico lead them to a civic project where the Mayor of Seoul wanted to construct a space where citizens could gather and use it for demonstrations, present motions, etc, whenever needed. 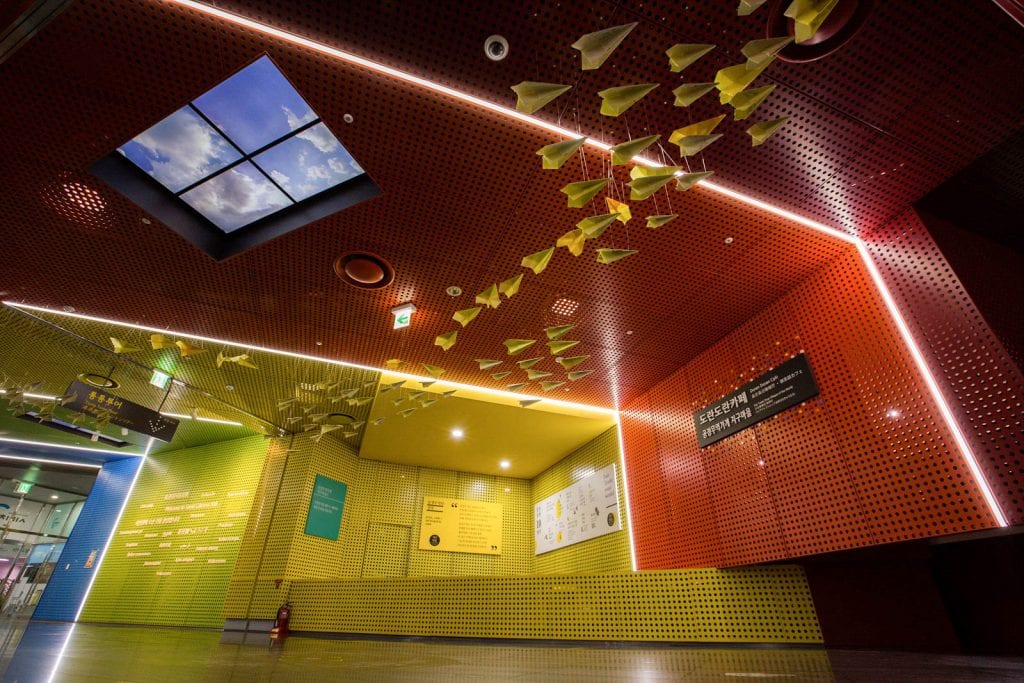 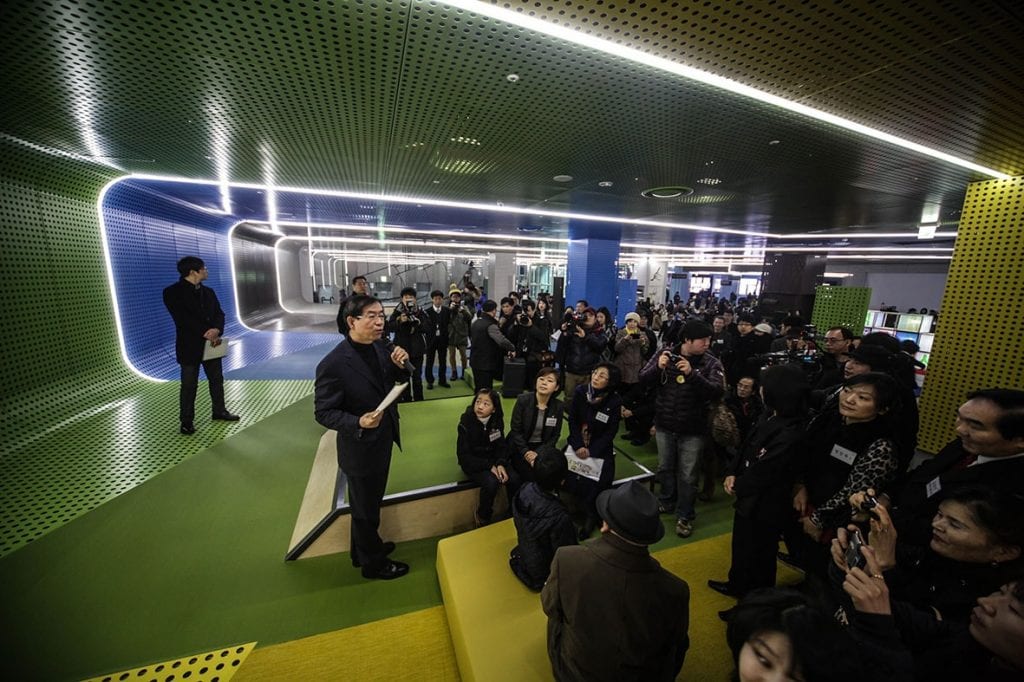 “The City wanted a facility wherein people could rent a space for two hours and give it back when their registered time was over. Something like a rented public space. We worked with a programme, with an easily accessible website, thus legalising the public space usage as it was within the Town Hall building in its basement with a usable space of 5000 square metre.” 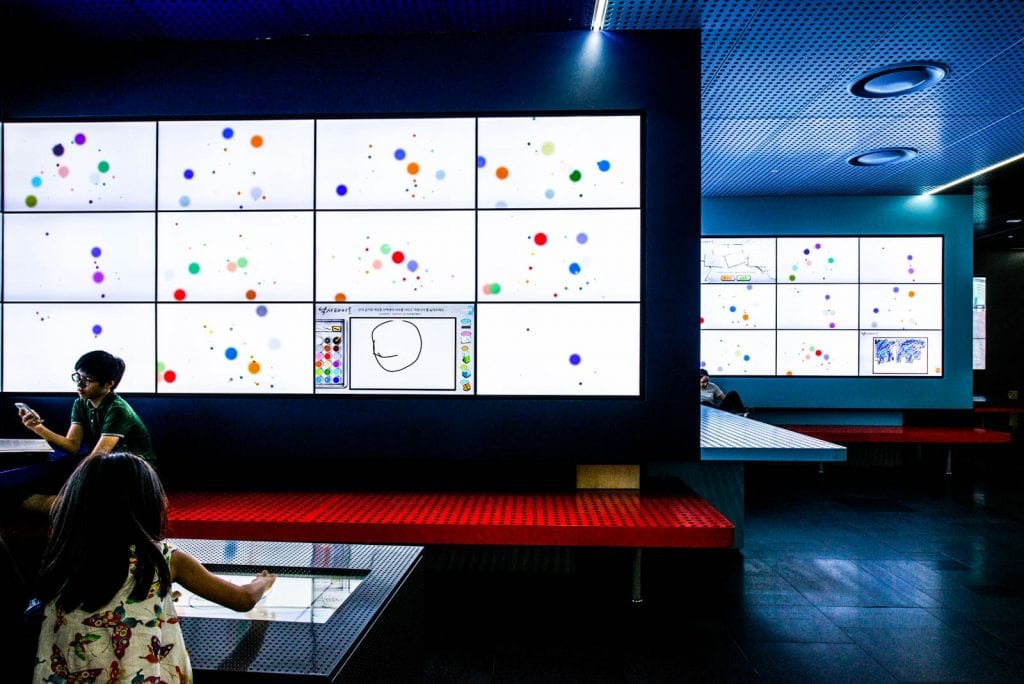 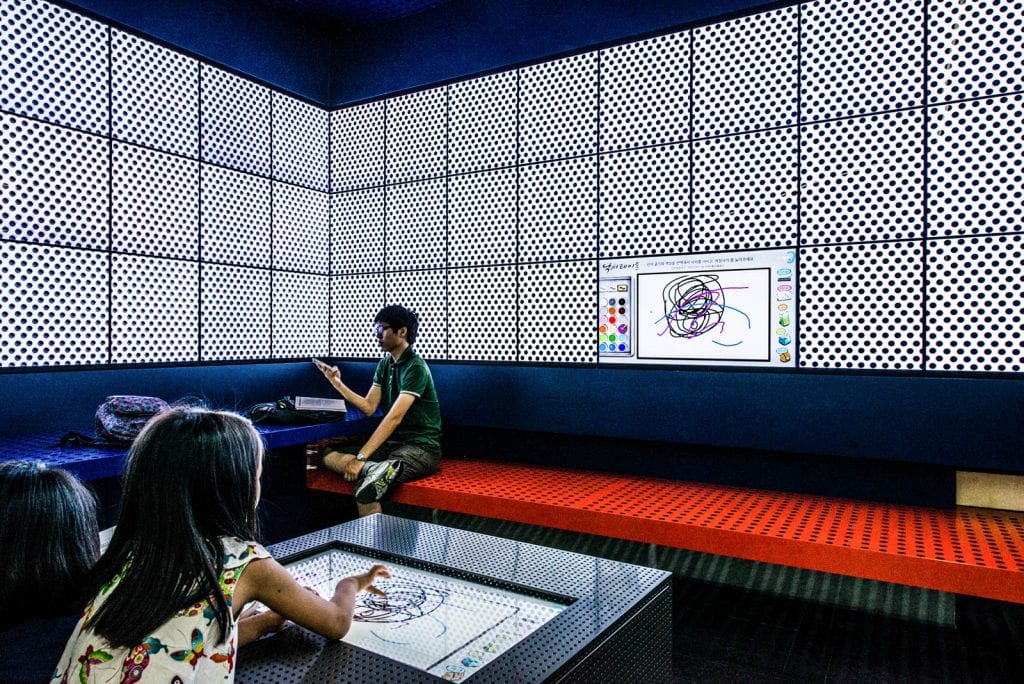 The area was designed loosely, without proper barriers, but with subtle demarcations, as the usage would vary according to the need of space. Each space uses different colours, on the floor and the ceiling.

“It was a big team; we were the space designers. The success of the whole process was mainly dependent on the programme that facilitated the space through an application that processed the applications and allocated space. We were able to link a space to a programme.”

The culturally relevant projects that Motoelastico was involved in were all the result of the Borrowed City Project they worked on and are still fascinated with. 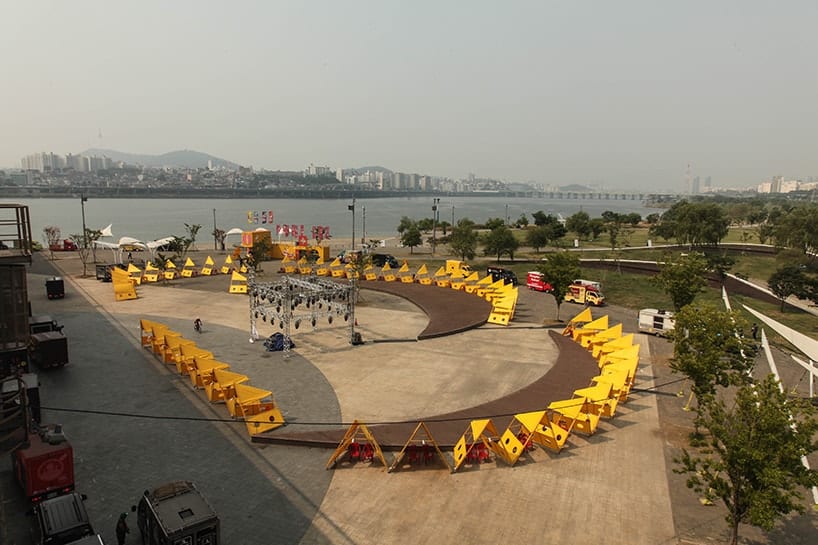 “The Bamdokkaebi Night Markets are collapsible and stackable structures used to host two design markets on the side of the Han River. The facilities only operate during weekends and for this reason, the booths had to be easy to store, move and deploy. The project provides two practical and iconic solutions for two different locations: Yeouido and Banpo,” explains Marco of one of the designed markets. 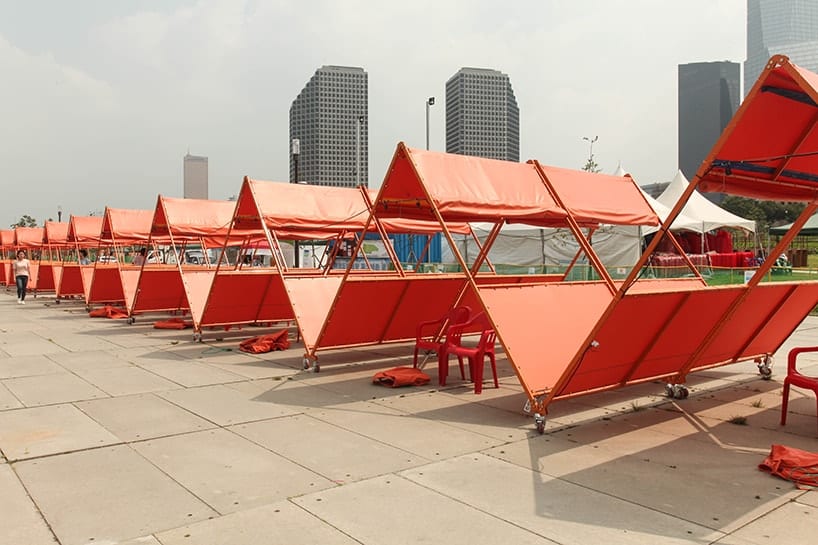 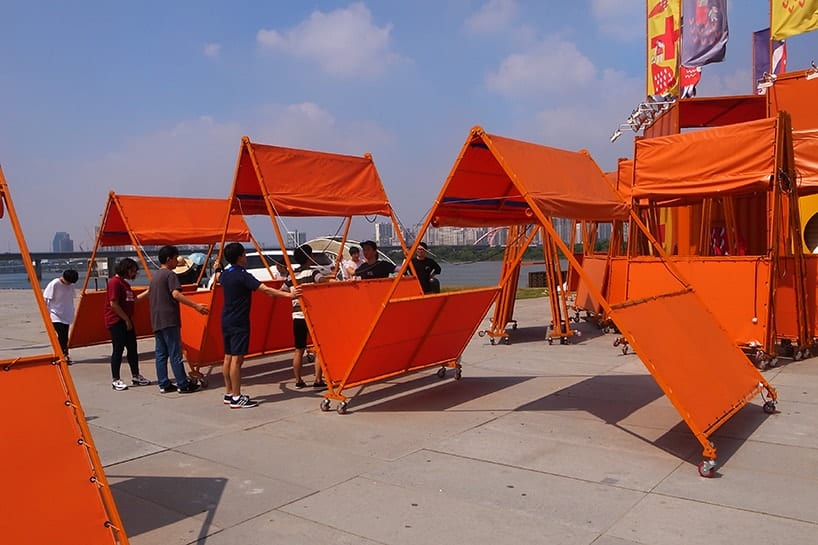 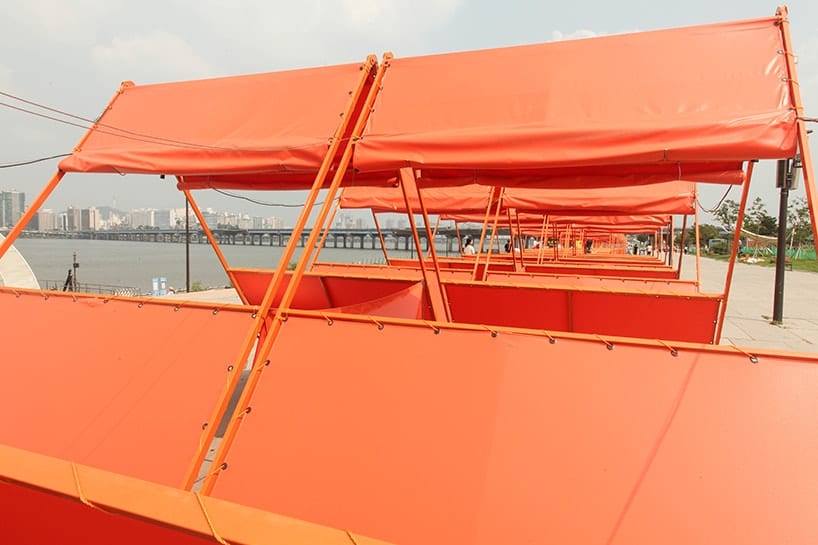 The Bamdokkaebi Night Markets is an initiative of the Seoul Metropolitan Government. The aim of which was to provide a platform for young craftsmen and designers to sell their product in a festive environment. The markets take place only at night during the weekend and each vendor has a standard booth to operate his business. During the week, when the market is not in use, all the booths were stored on site, occupying the minimum amount of space.

The Scroll is the main pavilion of the newly open Hangang Art Park, an open-air collection curated by Eun Byungsoo that includes 37 new public art pieces. The 3 loops structure welcomes the visitors with performing areas and areas to rest while providing a key to navigate through the Art Park.

The Hangang Art Park is a project supported by the Seoul Metropolitan Government. The goal is to enhance the quality of the public spaces along the banks of the Han river with artworks inspired directly by citizens’ ideas or suggestions. 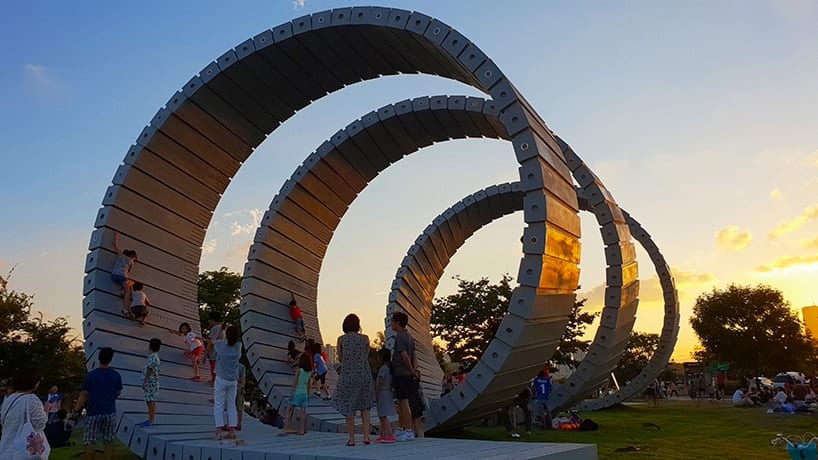 “The Scroll is the main building of this first phase and it is located in the proximity of the Ichon-dong subway exit. The project was assigned through an invited competition and the programme required the pavilion to function as a resting and performing space, but also as a base camp for the exploration of the surrounding artworks,” says Marco.

“With our project we decided to celebrate the generosity of the Han River that runs wide through the city of Seoul and brings life and prosperity to its banks and the surrounding hills. We recorded the Han River flow, from East to West, on a monumental Scroll, a twisting platform that embodies the flowing energy of the water.” 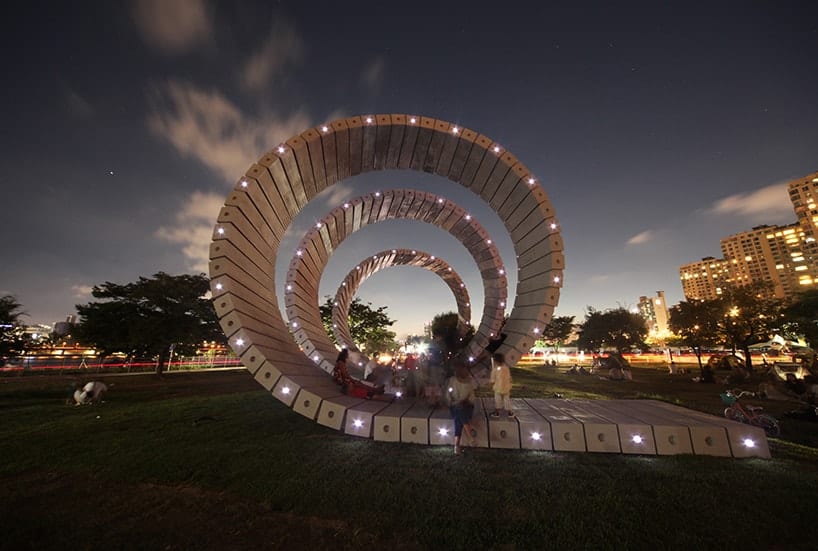 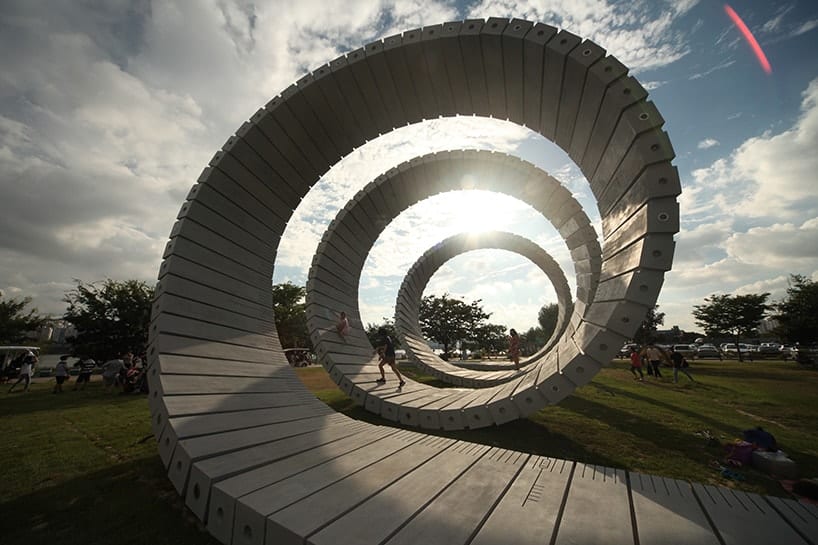 A Fiberglass Plastic Spiral In a Seoul Art Park 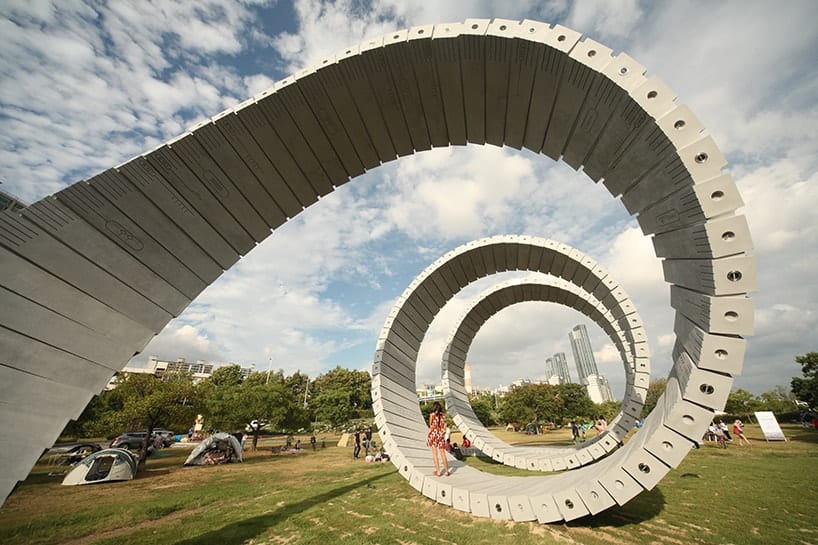 The Scroll Pavilion is a 90-meters rolled up scale engraved with the river’s most significant landmarks. It is a gigantic miniature covering the entire urban path of the Han River (40.5 Km) from east to west, divided into 202 block/units, each one representing 200 meters. Bridges, parks, archeological sites, iconic buildings which are currently shaping the life along the water, together with the location of the new HAP artworks, are drawn into icons and engraved into the blocks in contemporary cartouches. 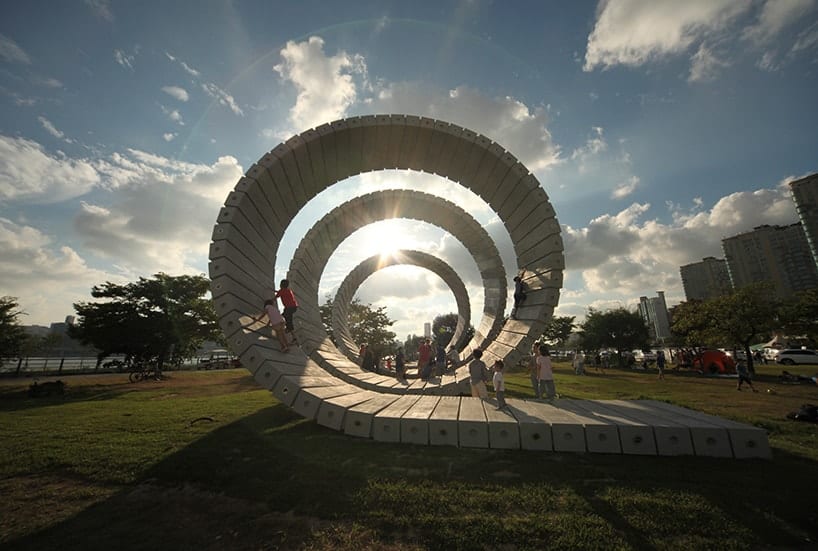 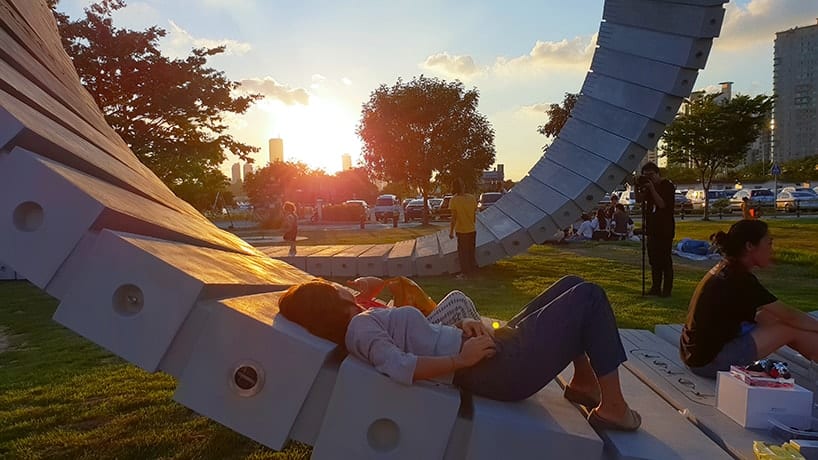 The construction was completed in less than 3 months. The main structure is similar to a rollercoaster, a double round pipe in pre-curved steel assembled directly on site. The blocks are made of FRP (Fiberglass Reinforced Plastic), in 4 different types: 86 out of 202 blocks have custom designed features. A system of hooks on the side of the blocks can be used to hang temporary covers in case of special performances or events.

The Scroll opened to the public in 2018.

Rather than an architect, I would like to work with a brilliant engineering team (Arup for example) on a commission that requires both of our expertise.

A city that you would want to work in and the architecture of which inspires you.

Doha: after all these years is still a place full of mysterious areas that I would love to investigate with a project.

How has the architecture in Doha shaped your design sensibilities?

I have never lived before in such an extreme climate. It is nice to see how old buildings tried to cope with it and it is sometimes frustrating how the new ones are ignoring the problem relying exclusively on air-conditioning. I am now more sensitive to passive cooling and how forms can affect the experience of people using a building.

Your favorite building in Doha and Korea and your home town and why so?

The Sheraton and the Post Office Building as testaments of a monumental ambition that goes beyond functionality.

In Korea I like the long rationalist Se Eun Sang Ga complex, an experiment from the 1970’s that keeps transforming through the years.

A project that you would like to do or design.

Recently we have been working quite a lot on public space, trying to embed the design in the local culture. I would like to work on a public space project in Doha to explore the challenges presented by such a diverse society. 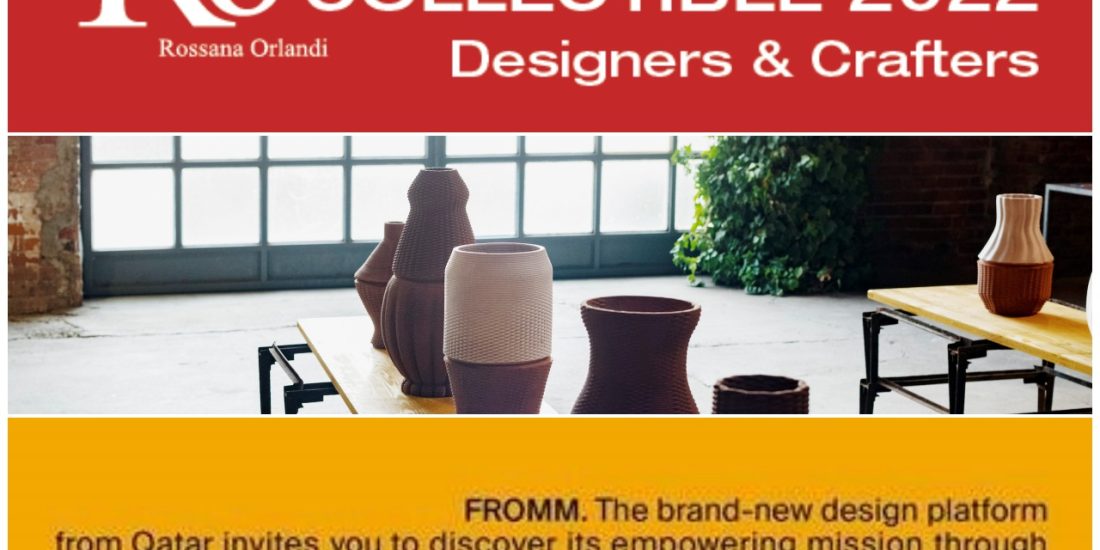 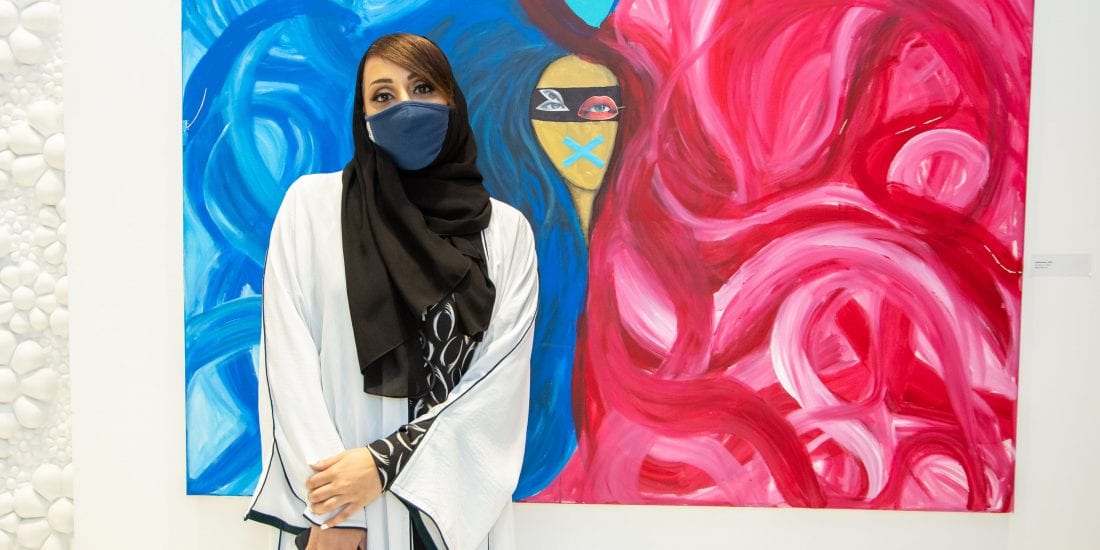 Collision of Thoughts at Mondrian Doha 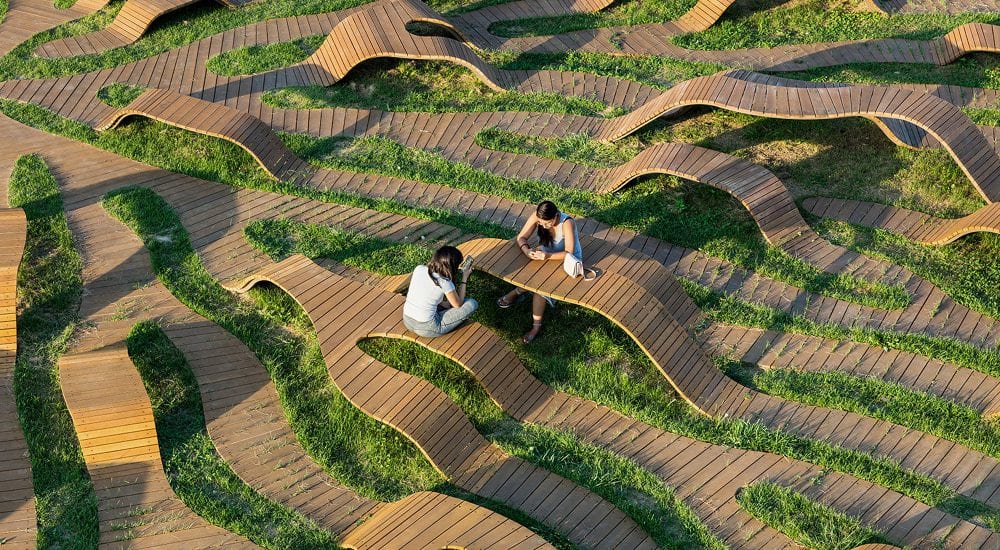