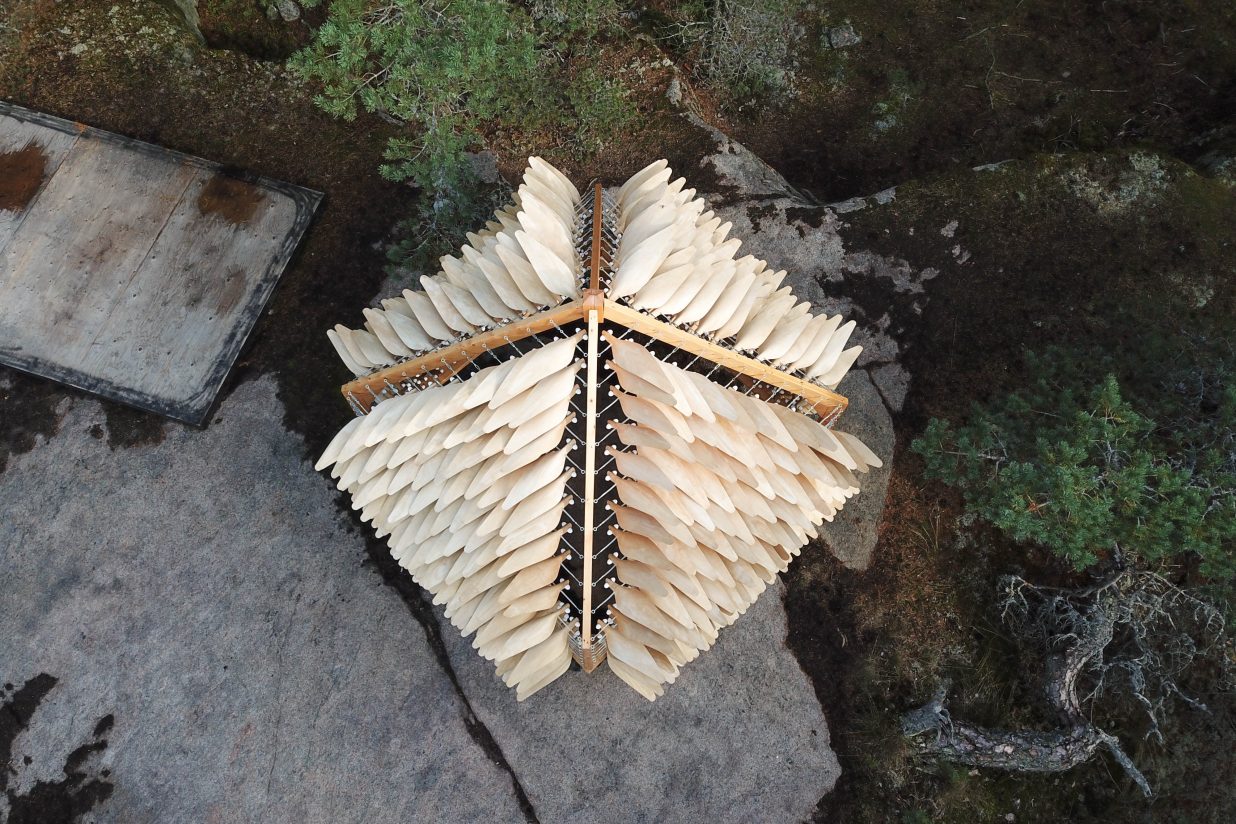 Exploring the idea that architecture can be made to seem “alive”, the Shiver House by Neon stimulates a deeper and longer lasting emotional relationship between people and the structures we inhabit. By Aarthi Mohan 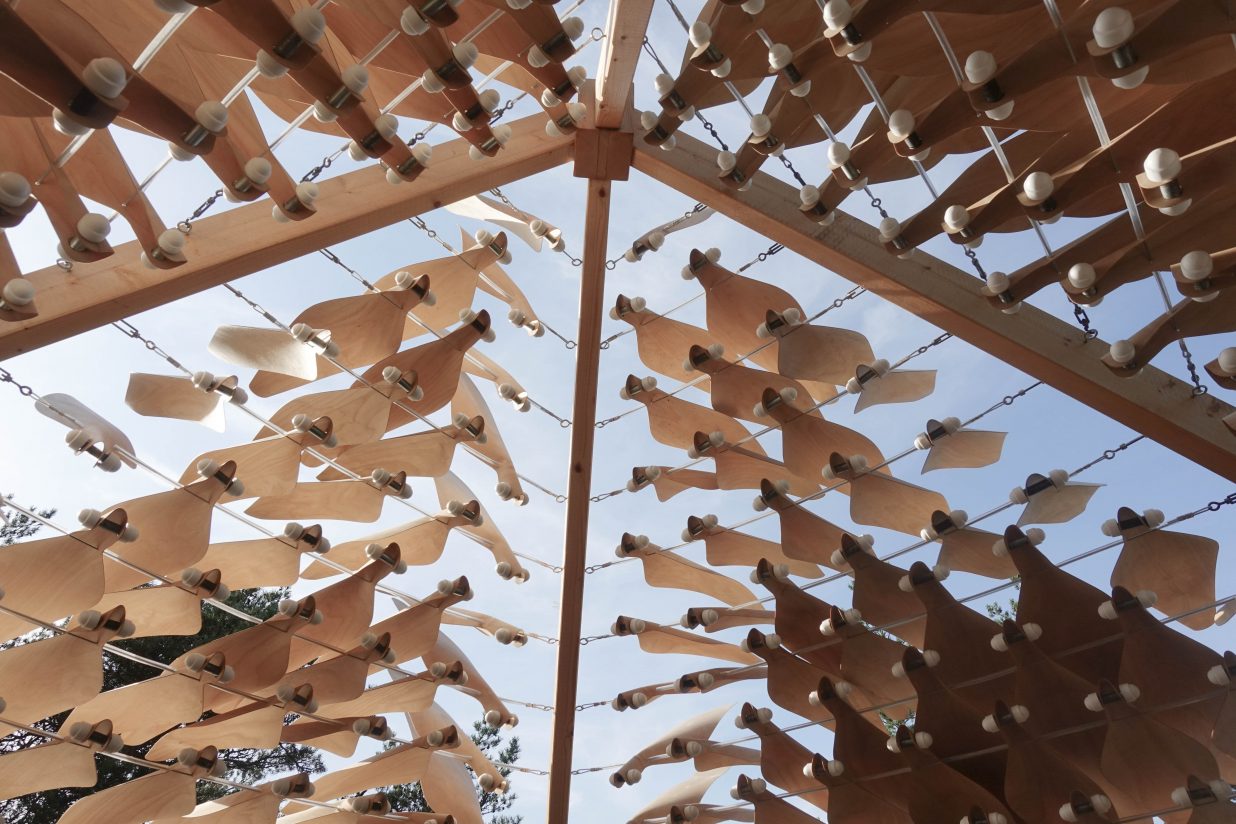 Shiver House is a radical reinvention of the common Finnish Hut (mökki). The project by Neon, an award winning design practice based in Margate, UK, is a kinetic “animal like” structure which moves and adapts in response to surrounding natural forces. The house is an art exploration into the idea that architecture can be used as a means to create a closer emotional link between its inhabitants and the natural world it sits within. 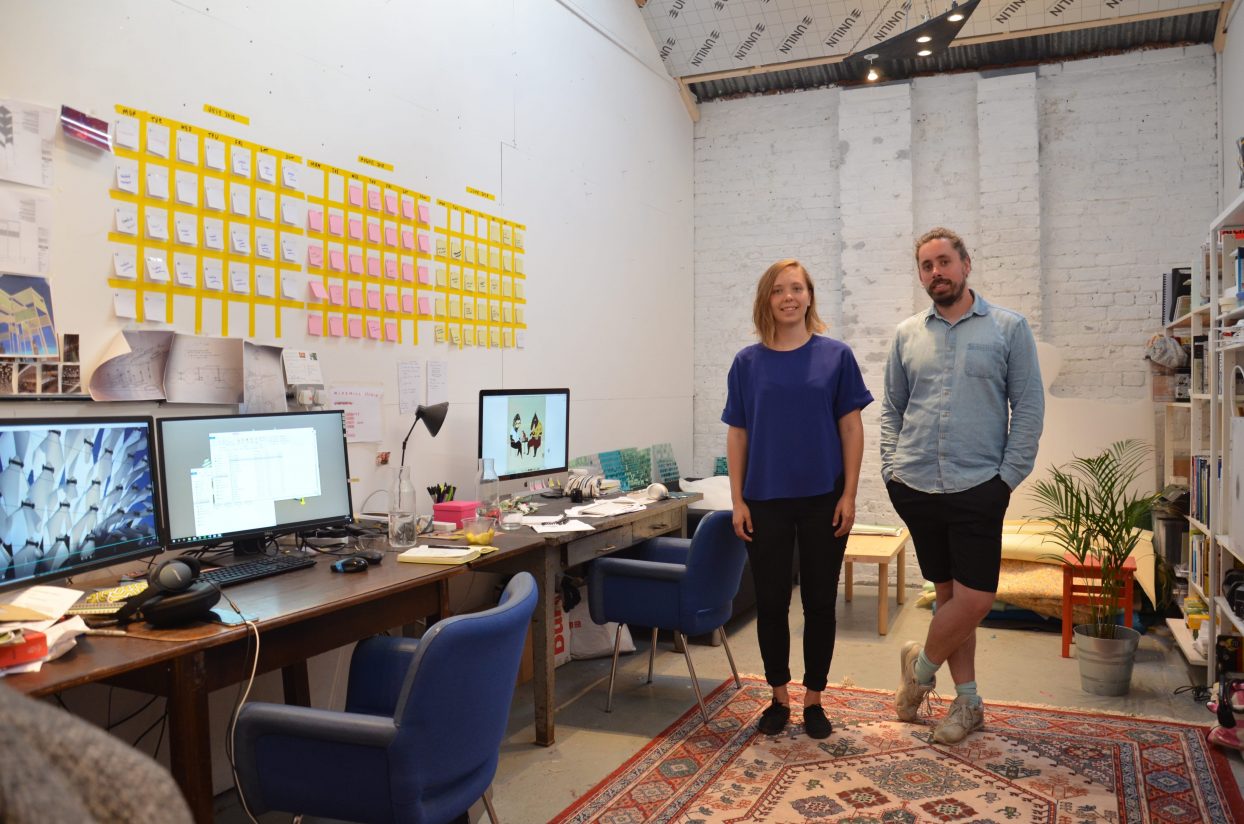 “While the world is adjusting to the new reality of Covid-19 I feel that there needs to be a greater emphasis given to the way architecture, art and design might be used as a means of reducing anxiety, connecting us with nature and bringing people together again in public spaces. Shiver House’s architecture is in a constant state of transformation and ‘performs’ with the ever-changing flows of the wind, it is an ideal means of grounding people in the present moment,” said Mark Nixon of NEON.

Shiver House was previously installed in 2015 as part of the Barfotastigen exhibition in Korppoo, Finland. The project was intended to be in-situ for 4 months but due to its popularity it was kept on site for a longer-term. On the project’s second year, Korppoo – the island on which it sits, began hosting summer concerts next to the project as part of the renowned Jazz festival “Korppoo Sea Jazz”. A new edition was created to celebrate the project’s 5-year anniversary constructed out of Finnish Airplane Ply. 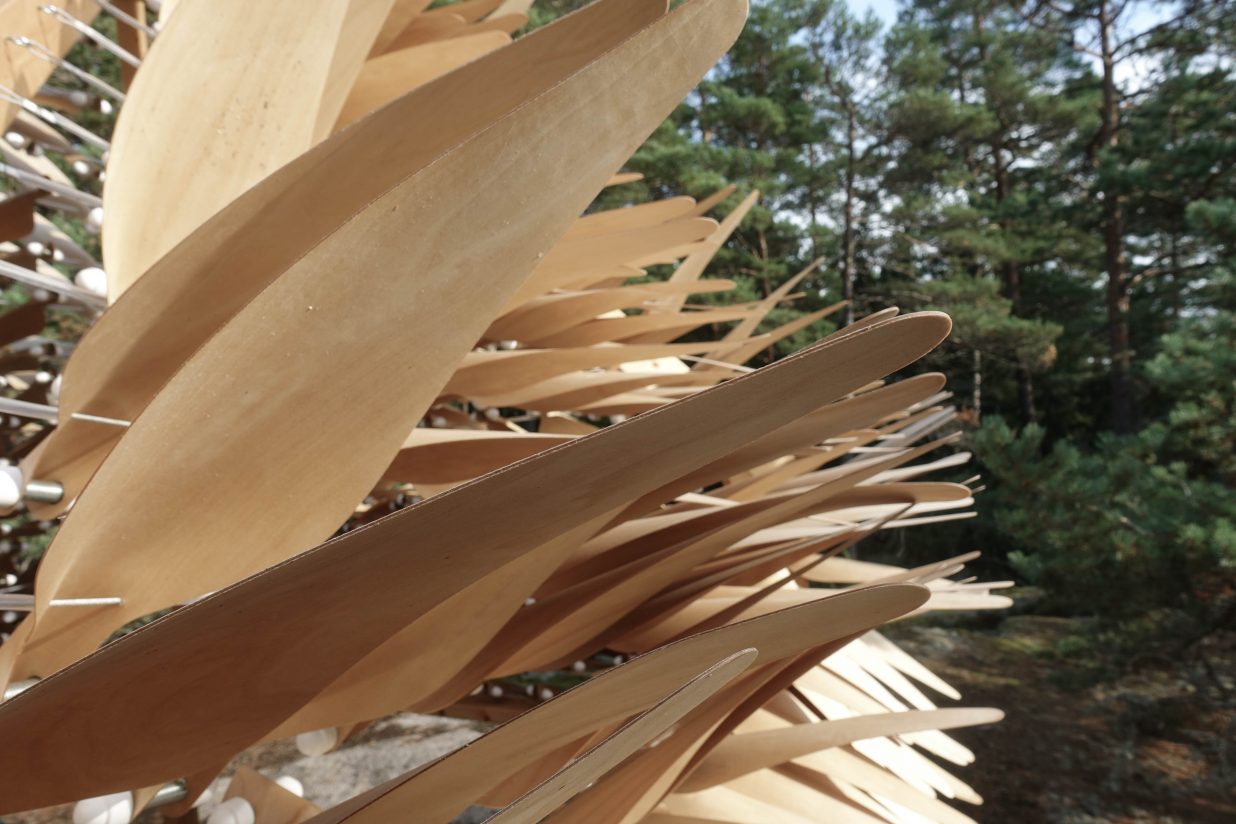 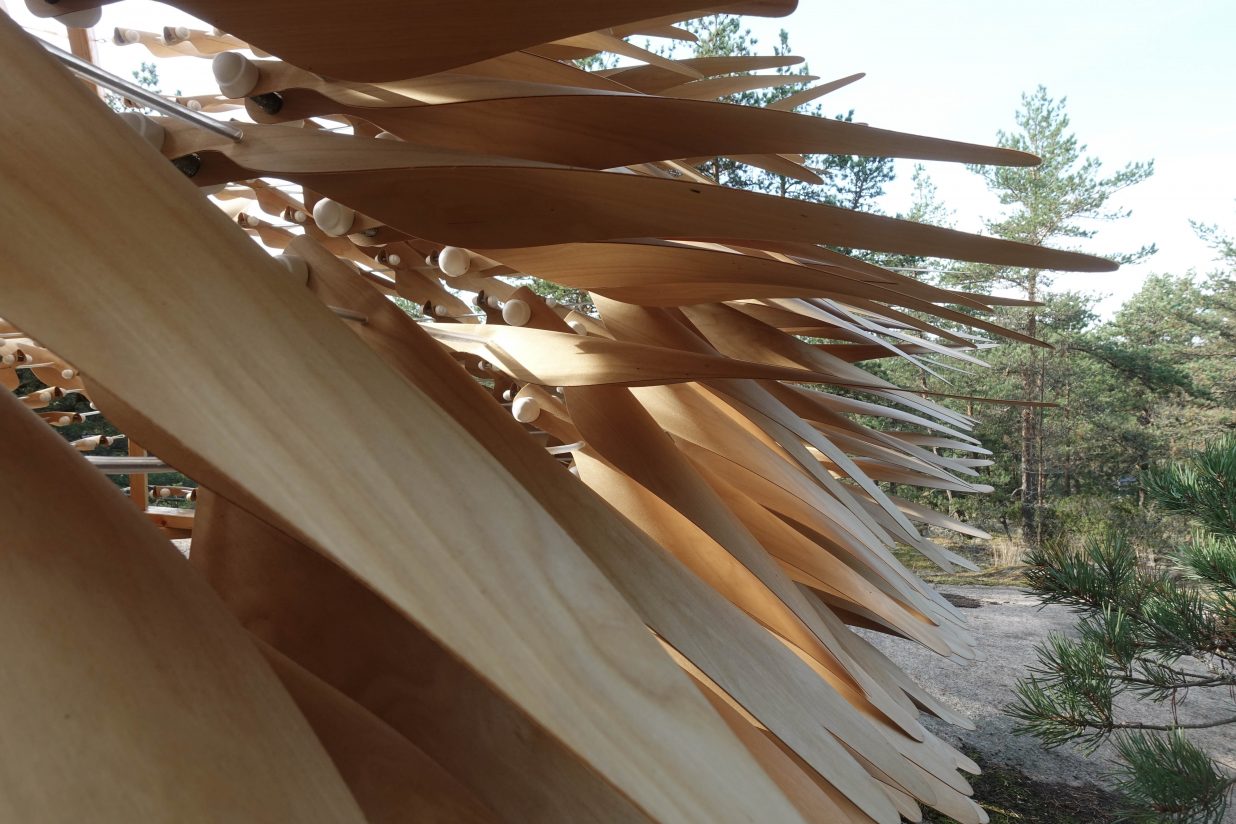 The house employs the use of 600 kinetic counter-weighted shingles which respond to the changing weather conditions of the site. Wind, rain and snow cause the shingles to rotate into a closed position giving the structure the temporary appearance and function of a shelter. The Shiver House is constantly transforming between being a functional shelter and a poetic and experiential device. Users that sit within the structure can observe the ever changing environment as they watch the kinetic shingles modulate the internal light levels as well as views of the surrounding landscape. 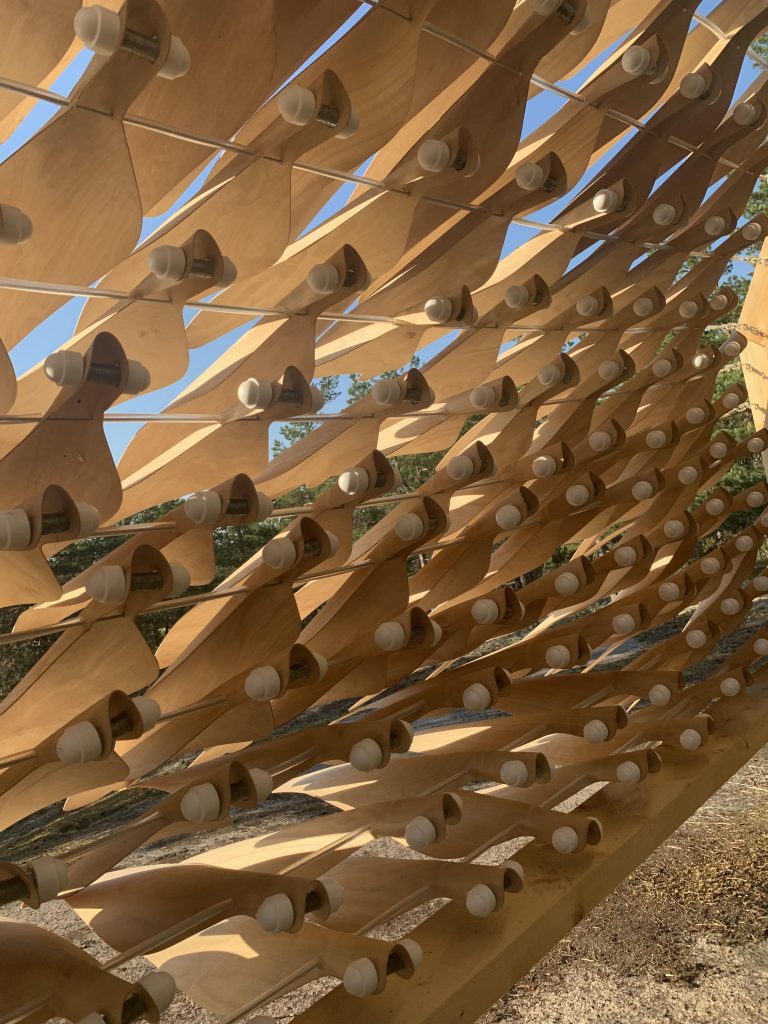 Conceptually, the piece suggests that architecture, rather than static and function-led can be a poetic, living and dynamic element which changes the way we relate to the landscape that surrounds us.

“Every year, the Barfotastigen exhibition invites professional artists to interact with the unique archipelago environment – asking them to respond to the site and/or issues concerning the wider archipelago area,” Sandra Nyberg the curator of Barfotastigen explained.

“While most works are temporary with a life span of 4 months to a year, Shiver House quickly became part of the site in a very prominent way. Therefore – to the delight of our visitors, the organizers of the Korpo Sea Jazz festival, and of course ourselves – we decided to commission a new version of the work and make it a more permanent feature of the exhibition. The concept of the work suits well to be experienced in all seasons and times of the day. The ever-changing conditions strongly and fittingly alter the mood of the work, ranging from lively and light to sombre and subdued.” 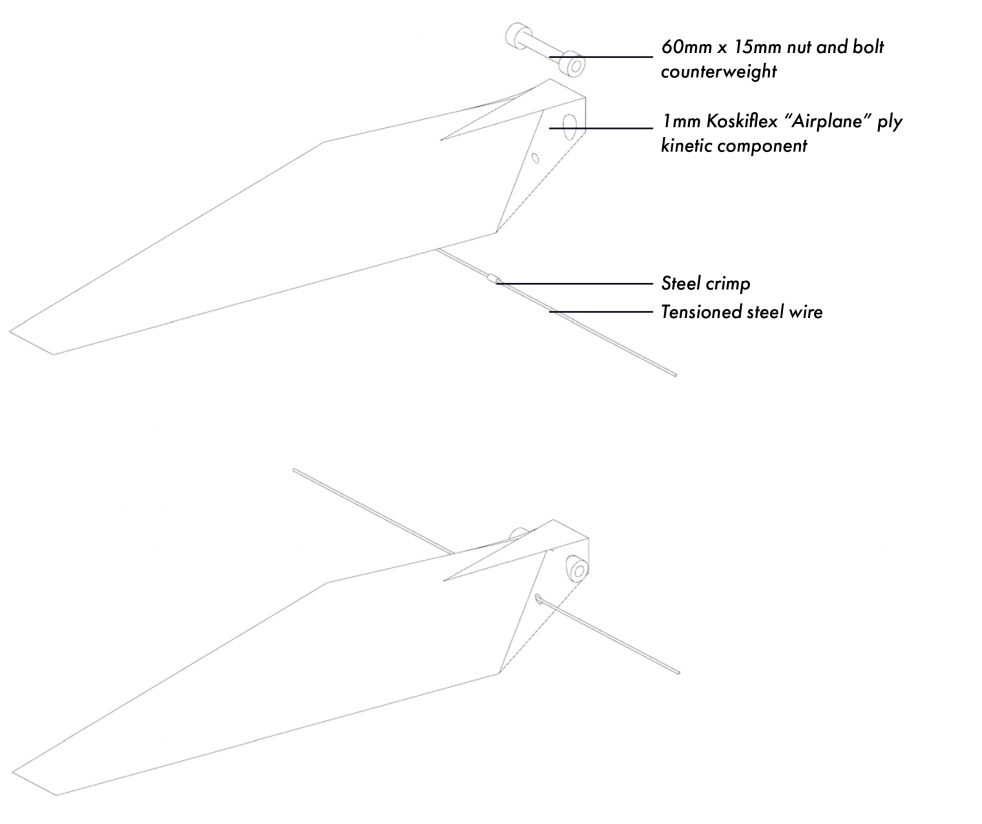 The construction was based on a simple timber structure that supports a number of tensioned steel wire rows. these steel wires are treated as batons and are designed to hold the counter weighted shingles. The shingles are constructed using a folded and cut airplane ply which has been soaked in a protective oil, while the counterweight is constructed using a stainless-steel nut and bolt.