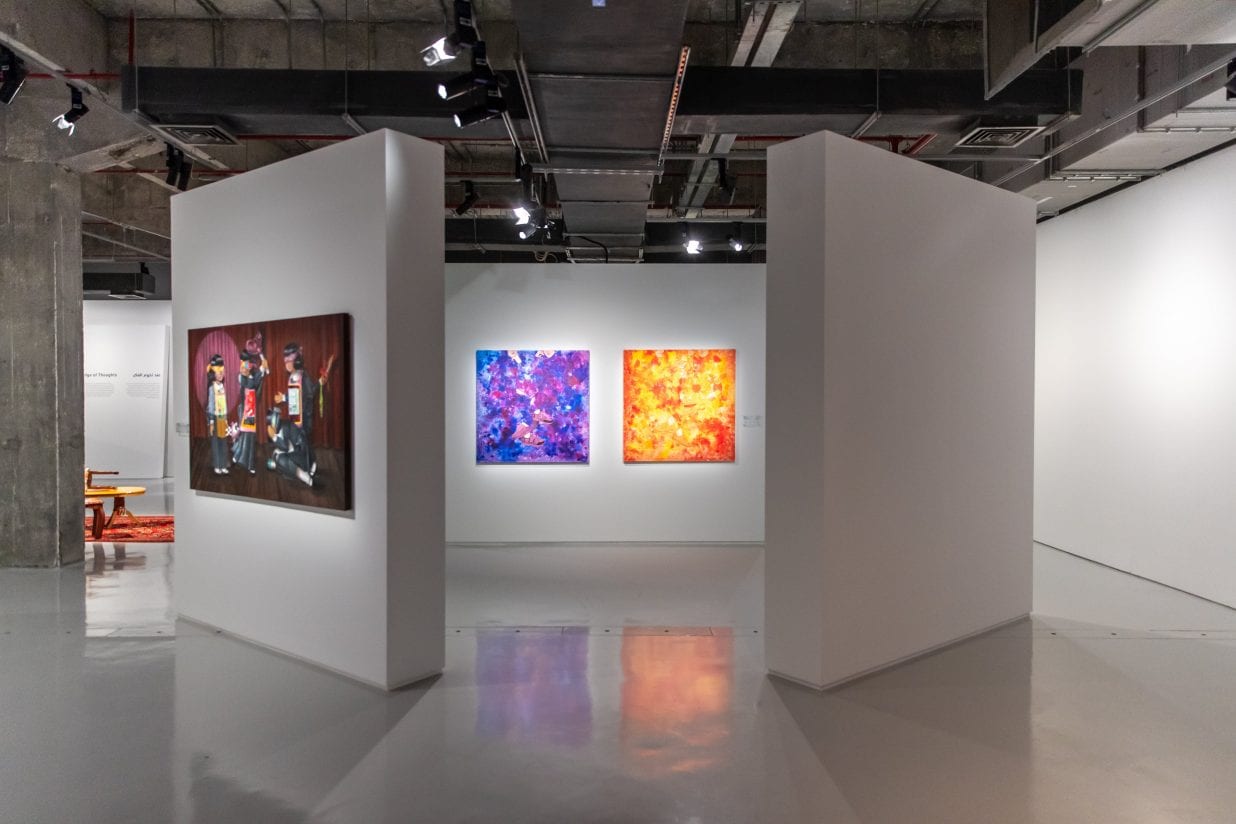 It All Began with an Idea

The fourth edition of the Fire stations Artist in Residence programme brings to fore the inherent subconscious thoughts that lie beyond one’s everyday comprehension yet tug memories by sights and sounds that are faintly associable. By Sindhu Nair

Qatar Museums under the patronage of HE Sheikha Al Mayassa bint Hamad bin Khalifa Al Thani opened Infinite Dimensions at the Garage Gallery in the Fire Station Museum on July 15. This exhibition is the culmination of an annual initiative that exhibits the works of 19 artists who have created 55 artworks after a nine-month-long residential programme within the Fire Station Museum. 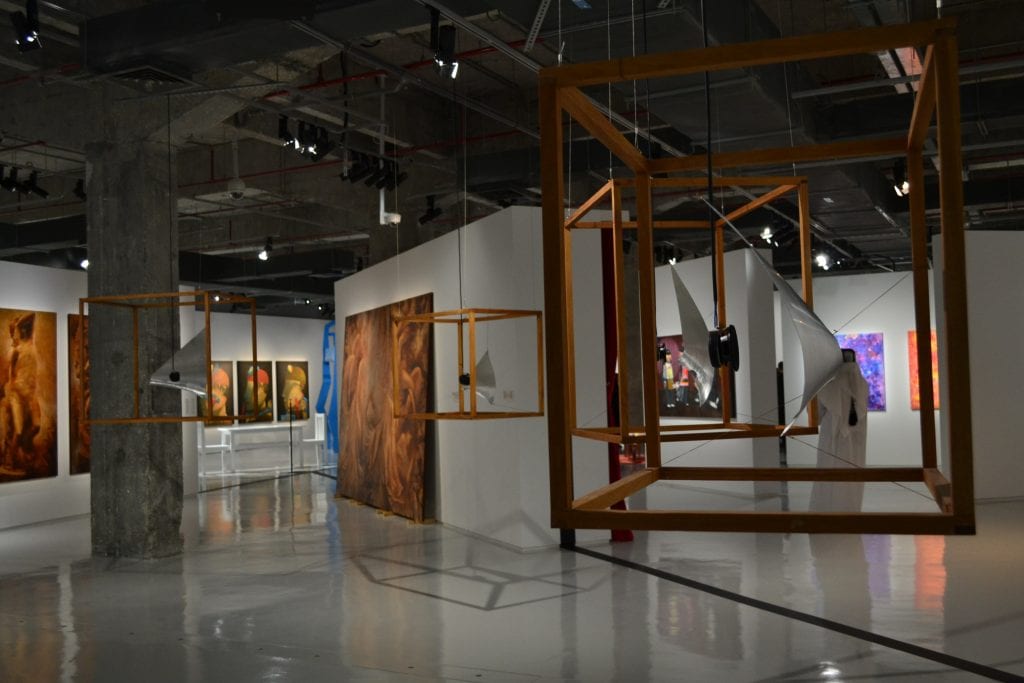 The exhibition opens with a door, of course. Not the structural barrier but an art exhibit in the form of a door by Ala Bata. Thus, commenced the exhibition Infinite Dimensions that introduces the creative process where ideas are not transformed into artforms rather they become the artforms. The works explore the focal point of artworks or the work itself and the idea behind it. 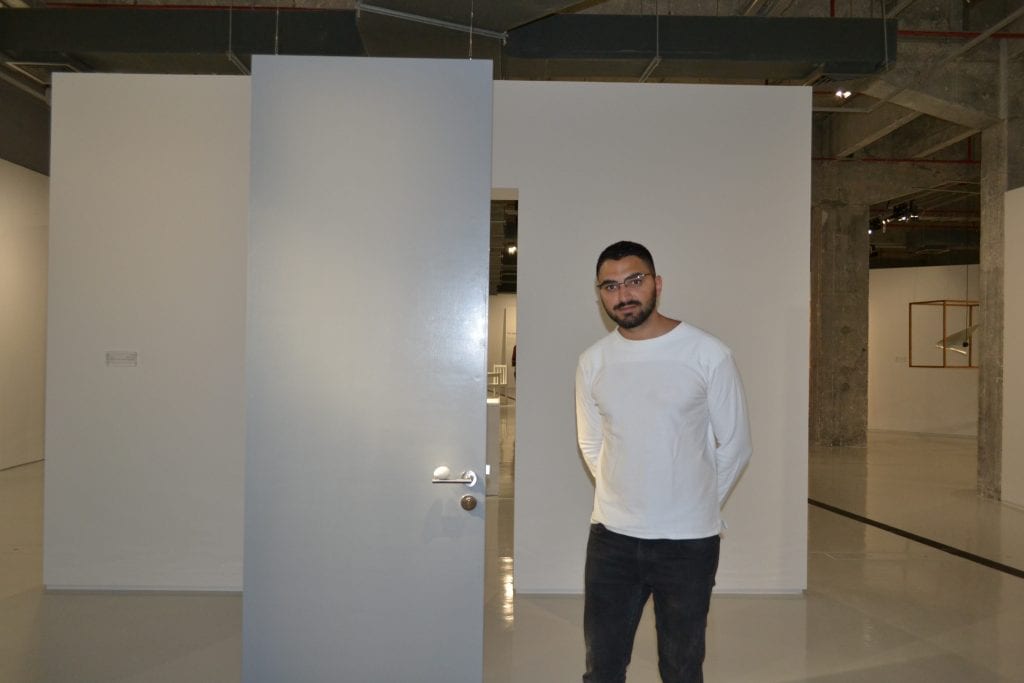 Better Luck Next Time, Installation in wood, stainless steel, and egg by Ala Bata.

“This exhibition stemmed from the idea of working on each artists’ understanding of conceptualism and then through open discussions, interpretation, and experimentations the artform was arrived at. The idea or the concept of the art form was initially identified before the aesthetic value or the techniques behind it,” reveals Dr. Bahaa Abudaya, Curator of Infinite Dimensions. 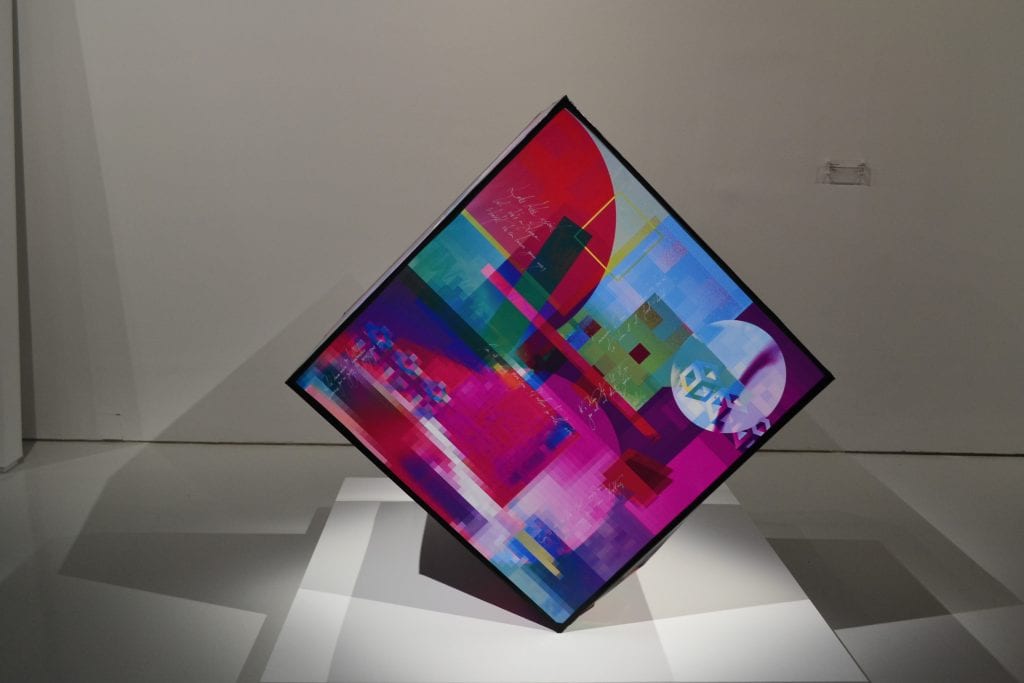 Reminiscence, mixed media by Shaikha Al Hardan is a manifestation of the artists’ memories

The exhibition is divided into three sections; artworks that are open to different interpretation, the Tangible Spectrums, artworks that are more direct, Visual Sphere and those that lie somewhere between these two realms of understandings, the Edge of Thoughts.

Walking Through the Subconscious

Entering the first segment, the Tangible Spectrum through the door titled, Better Luck Next Time, through which Ala Bata gives us an uncertain view of the future, the visitor to the exhibition is urged to explore abstract concepts. From the egg balancing precariously on the doorknob, conveying a feeling of dread as one wants to turn the door handles thus disrupting the egg from its position and maybe break it in the process, we move to another of Ala’s creations, a series of continuous pen drawings, one titled A Lucid Dream, which he says is his quest to find a purpose in life. 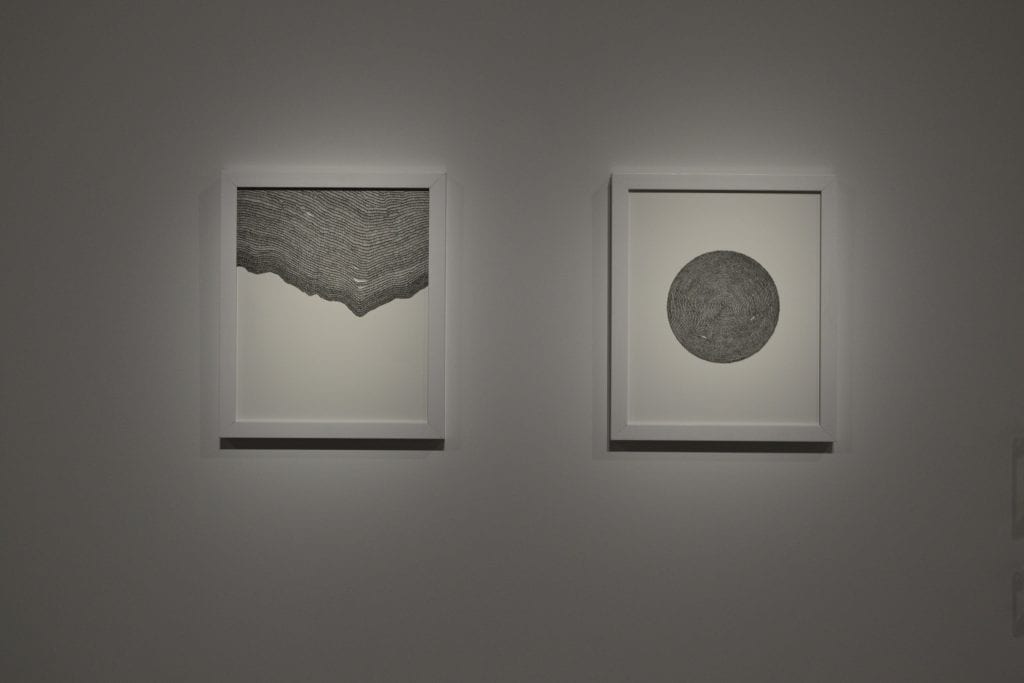 “I started with materials you find around you and then worked on the concept of fragility. It took off from the fragility of being, of living.  The egg was the symbol of life, the expectancy of life, and the mystery of finding what is behind the door or what happens when we turn the handle becomes the mystery,” says Ala on how he arrived at his creations,  “I have worked earlier in juxtapositions of photography, digital manipulation of art,  installations, merging different symbols together digitally. But this time I decided to give more depth and physical interpretation of my creation.” 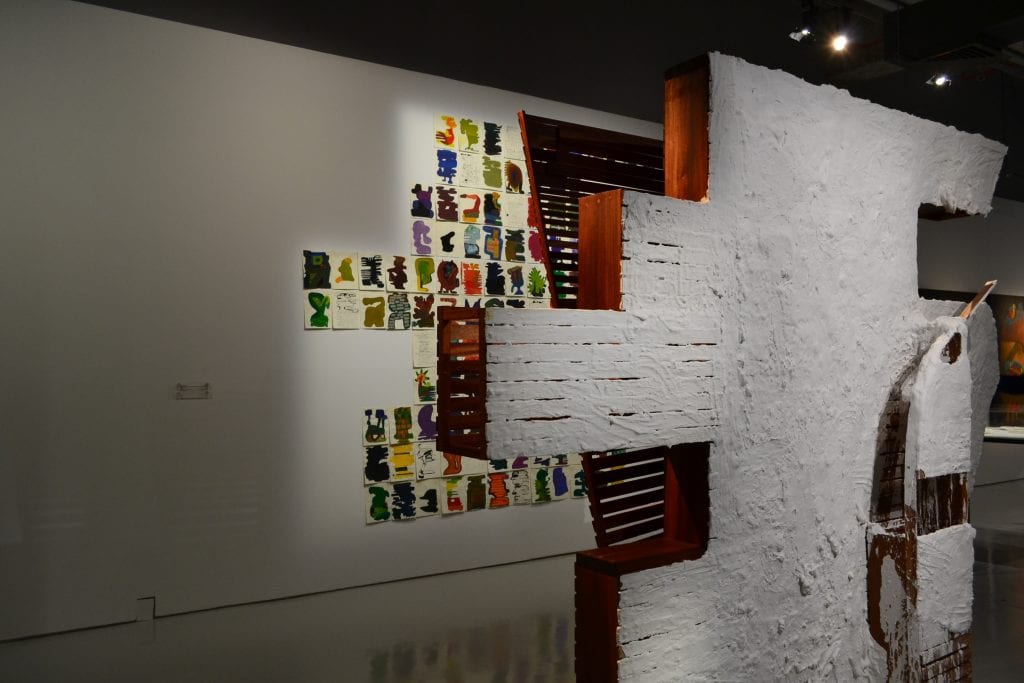 Palimpsest, acrylic on linen by Micheal Perrone is work with written text from his sketchbook pages

On the pen drawings, he says, “This is a childhood behaviour. I used to draw castle bricks and keep on it until I made a huge castle. I still do not why I keep doing these meticulous prints or lines. It could be due to my need for a sense of achievement, a sense of order in life, the love for hard work. The idea is to bring to light the metaphysical element at play, the emotions one goes through in this moment of quietude, the memories when you are involved in this continuous process of fine line sketches.”

From Ala’s recurrent lines we move to Nourbanu Hijazi’s Demons, an installation that explores parallels between the perception of the paranormal and mental illness in the context of Arabic Islamic society.  Palestinian artist from Saudi Arabia, Nourbanu Hijazi’s artworks aim to explore the human condition, specifically internal conflicts and mental illness. Nourbanu’s work is indeed haunting with a demon conceptualised and brought to art through steel wires, plaster, acrylic, and clay. The brain is conceptualised as a hemisphere with cardboard cut-outs from her personal journal hanging down from a string. 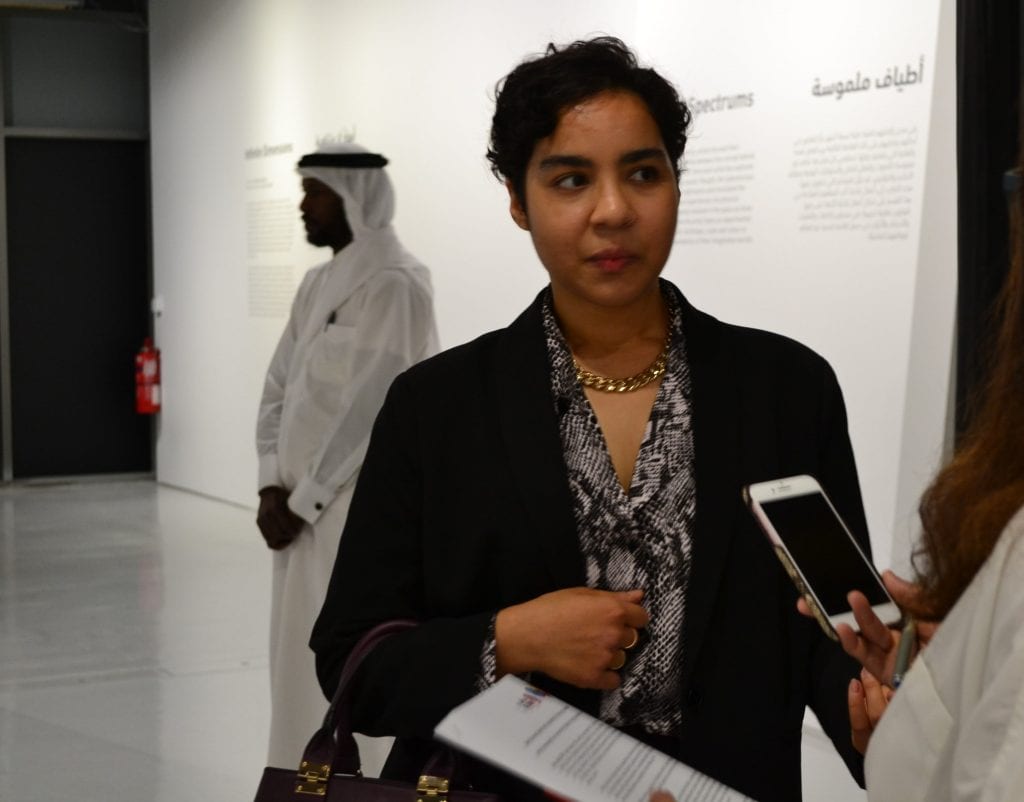 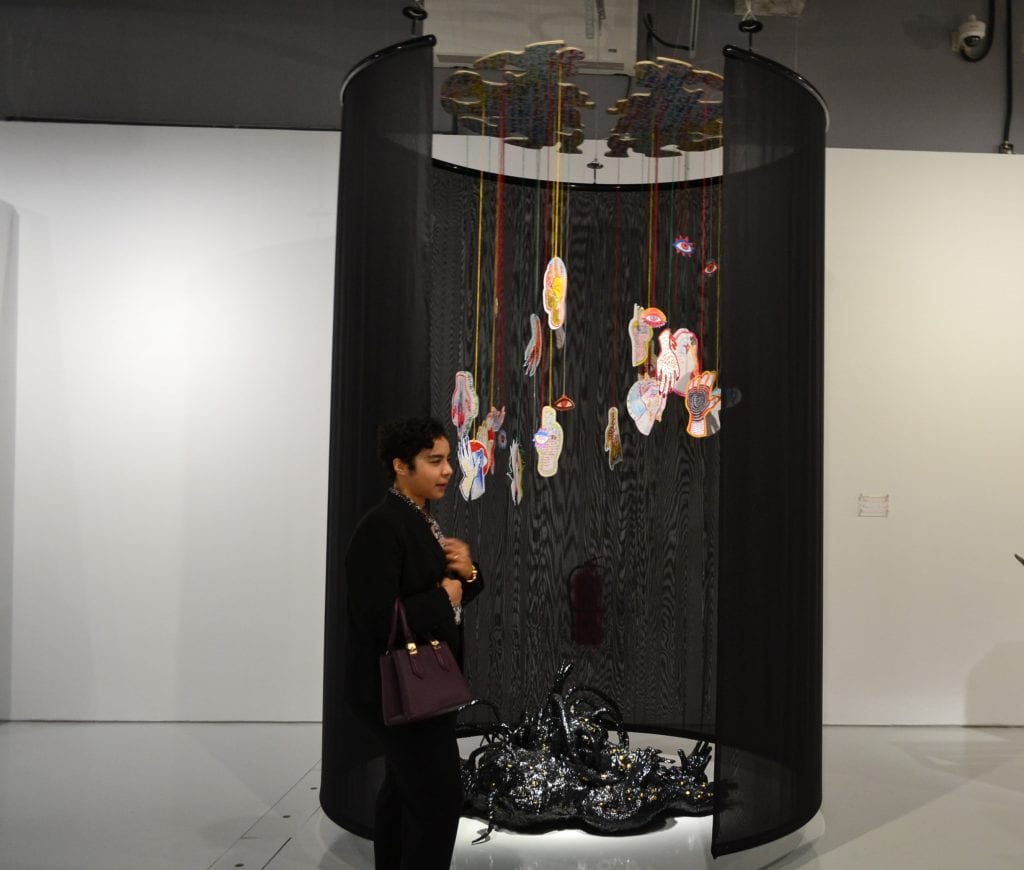 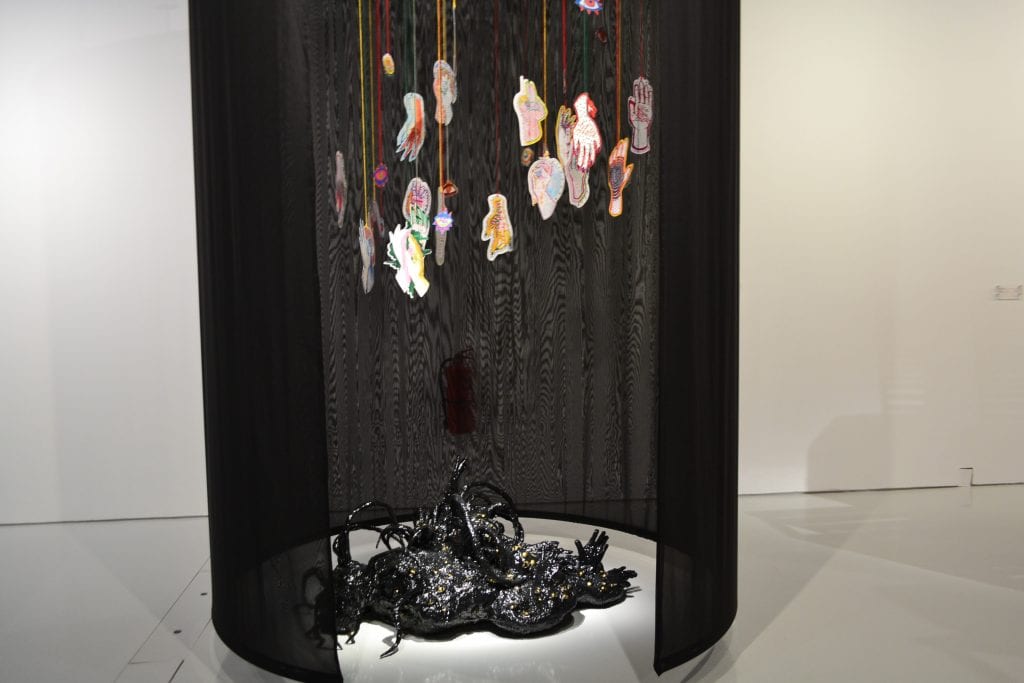 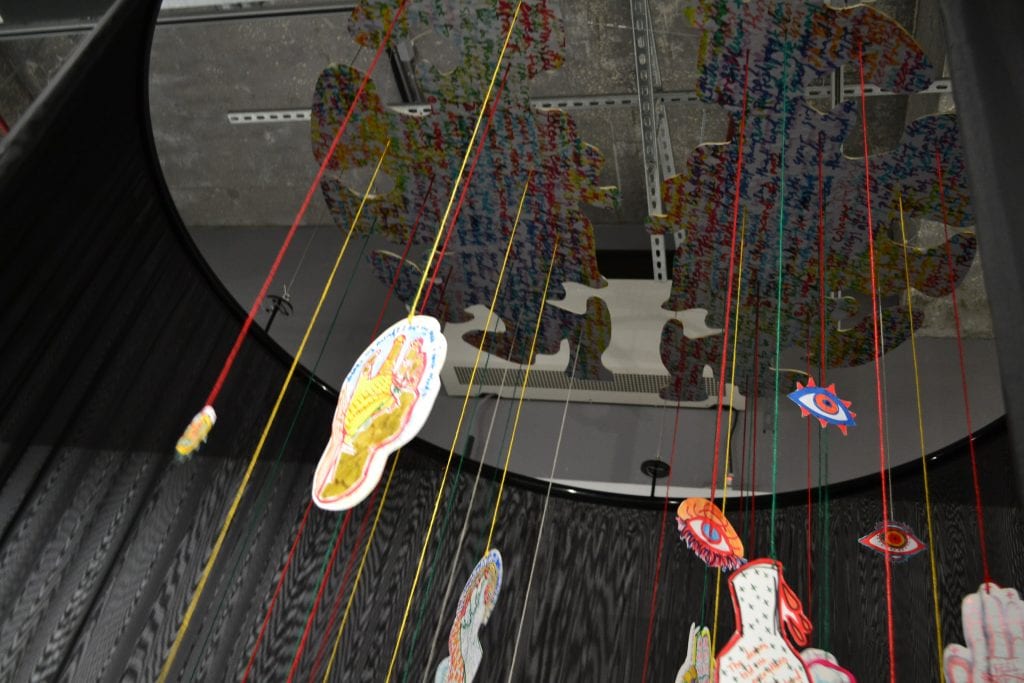 Nourbanu Hijazi’s Demons is made of steel wires, plaster, acrylic and clay. The creatures are inspired by the artists’ own experience with sleep disorders

“Though my specialty is painting, for this residency I wanted to challenge myself to do something I had not tried before. I come from a painting and design-making background and I have used materials here that I have never used before. This is a condition called Parasomnias or disruptive sleep-related disorders where your consciousness is aware of what is happening but your subconscious kicks in and weird hallucinations start to come up and there is a sense of anxiety. And it is scientifically proven disorder, but what I am talking about occurred in an era when this scientific side of it was not well-known and thus this phenomenon was associated with an evil Jinn or demons in Islam,” says Nourbanu, who experienced these disturbing dreams in her teens.

“But the moment I understood the scientific side of the condition I was going through, my anxiety and concern was reduced and I ceased to worry about it and slowly the dreams vanished too,” she says. And that is the phycological aspect of her installation, of having control over your dreams, understanding them and thus not letting it affect you. 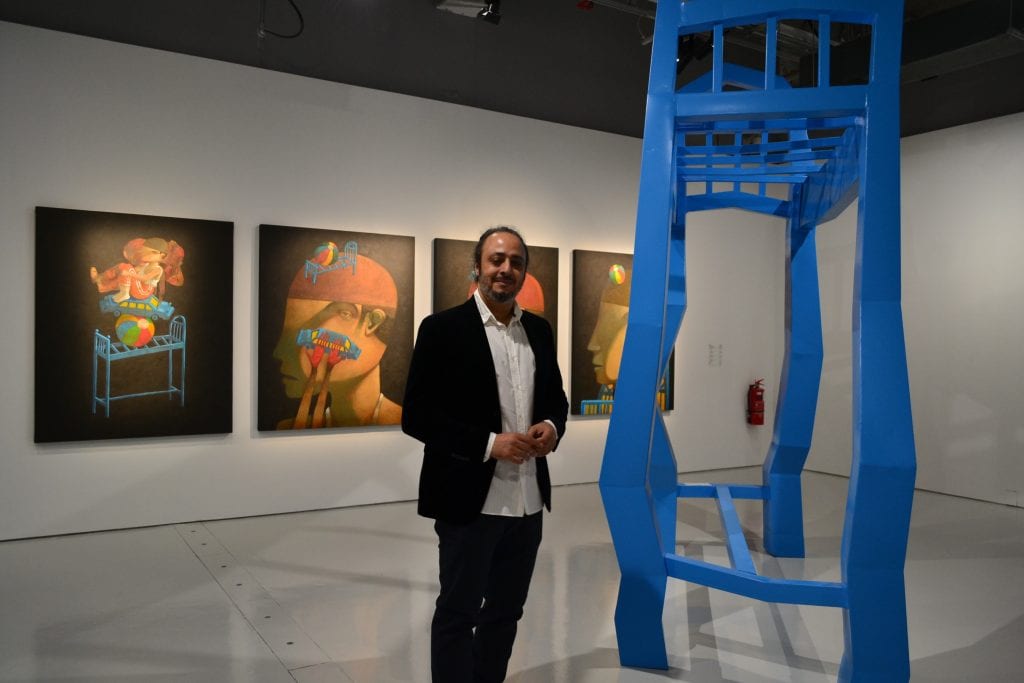 Hassan Manasrah’s work is also an insight into his thoughts just before sleep conquers. It is his unique focus on human beings and their relation to their surroundings in this state of being.

Hassan Manasrah from Jordan has been working at the Al Jazeera digital for over three years and he already has a solo exhibition to his credit. His installation and painting is another manifestation of a dream sequence. 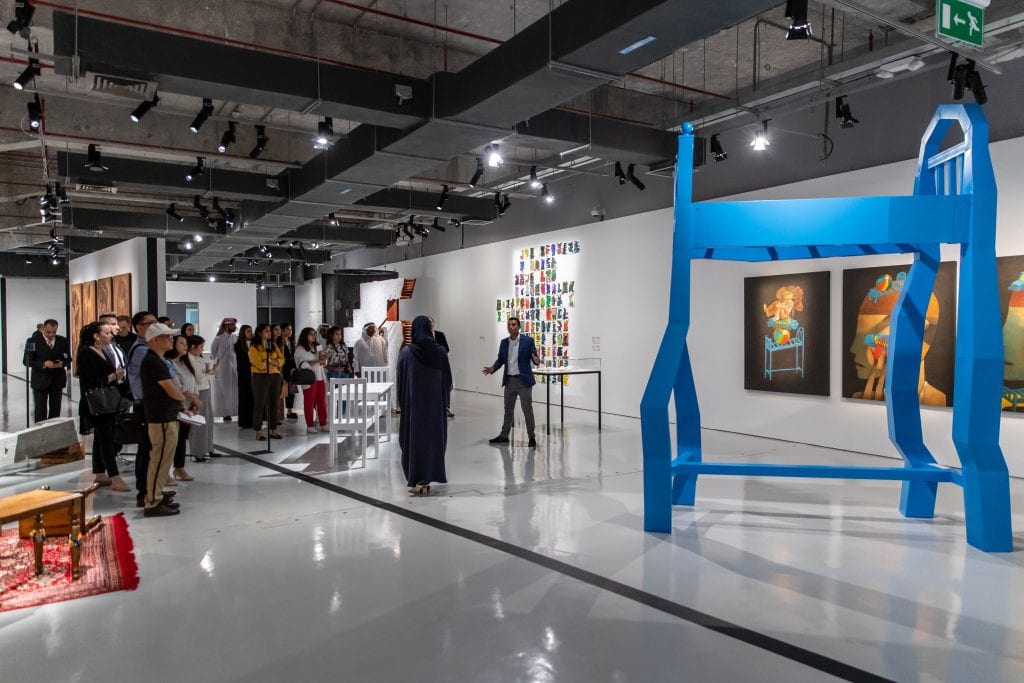 “It is actually part of sleeping stages,” says Hassan, taking us through the paintings, “where the consciousness moves from being alert, close to reality and moves to a stage where the dreams become bigger than reality and sometimes the dreams are also part of the subconscious stage. “ 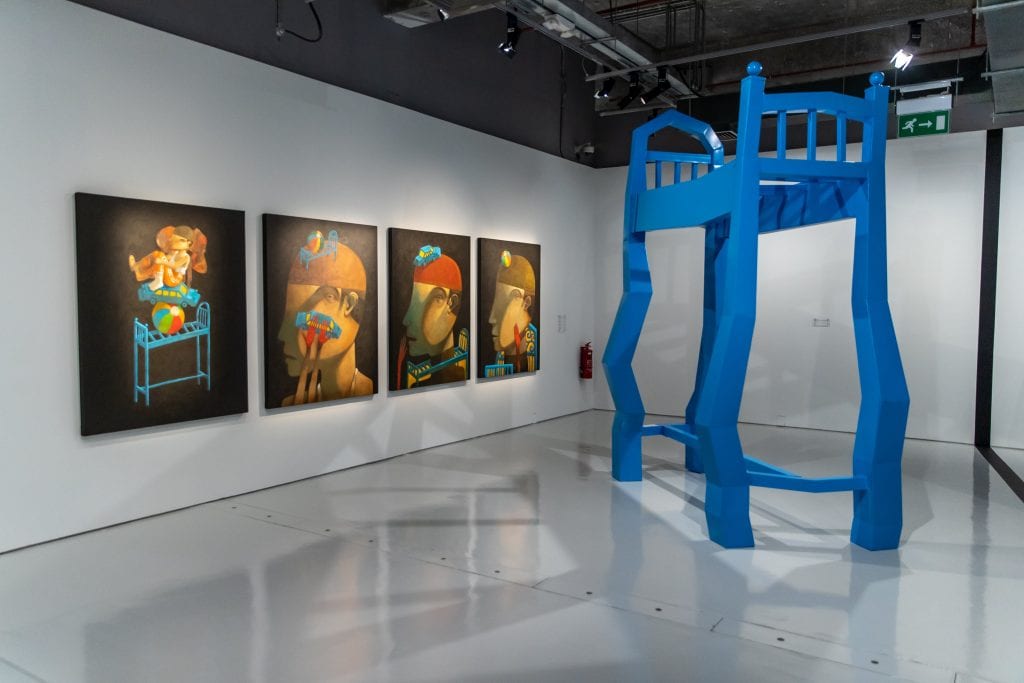 The large bed, termed Blue Bed, in iron, with legs that seem to rise to the roof and are springy and twined in its design depicts the moments when we are closest to ourselves, chained to our uncertainties and aspirations, Hassan explains. Mostly concentrating on sculptures, Hassan worked on iron for the first time in his career. He says, “We did not get much time, we had less sleeping hours to give us more working time but this was a very different and interesting experience.”

Neither Here Nor There

Moving on to the Edge of Thoughts which is demarcated from Tangible Spectrum by a physical line demarcating the space in the huge Fire Station Museum Gallery. This segment references personal stories, where artists try to find a balance between ideas and execution.

The favourite in this space is this complex set of very precise installations in mixed media is a work by Qatari architect Mohammed Al-Suwaidi. 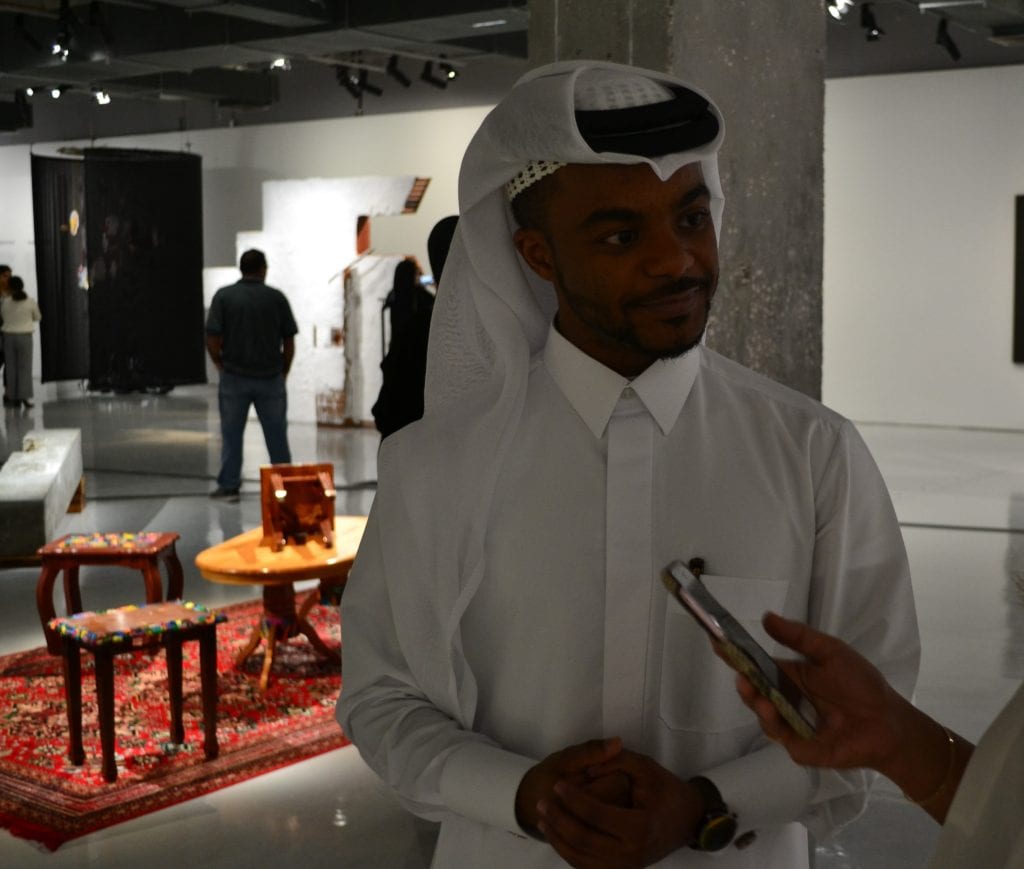 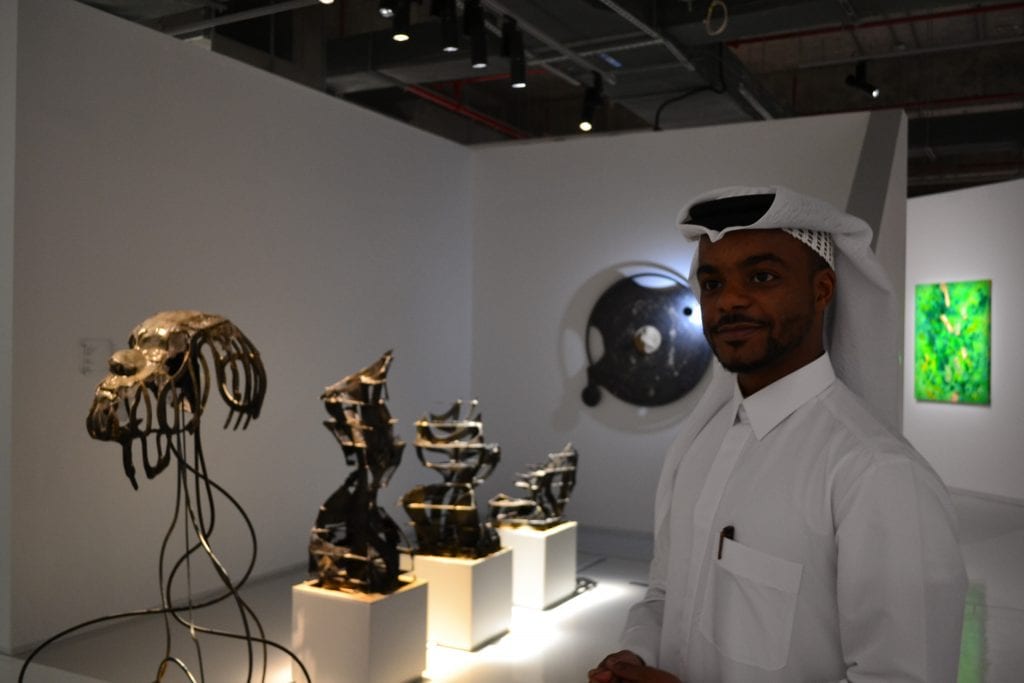 “The work that has materialised here is not the one that I started with. But I was sure that I was working on the concept of change,” laughs Mohammed Al-Suwaidi, a promising architect-cum-artist, whose work and dedication is an inspiration to the younger generation, “Change of form, the formation of buildings, the concept of time, the effect time has on persons, buildings, and on the change that is a constant in our lives, are all facets I wanted to touch on in my installation.”

And this installation is no small work, it involves sketch-based forms and drawings that are digitally 3D modelled. Multiple software programmes are then used to import the 3D model and output a series of works with fabrication tools including 3D printing, laser cutting, and CNC using PLA plastic and acrylic.  Mild steel and aluminium is layered using finishing techniques composed of natural sand and acrylic based paints to achieve industrial aesthetic. 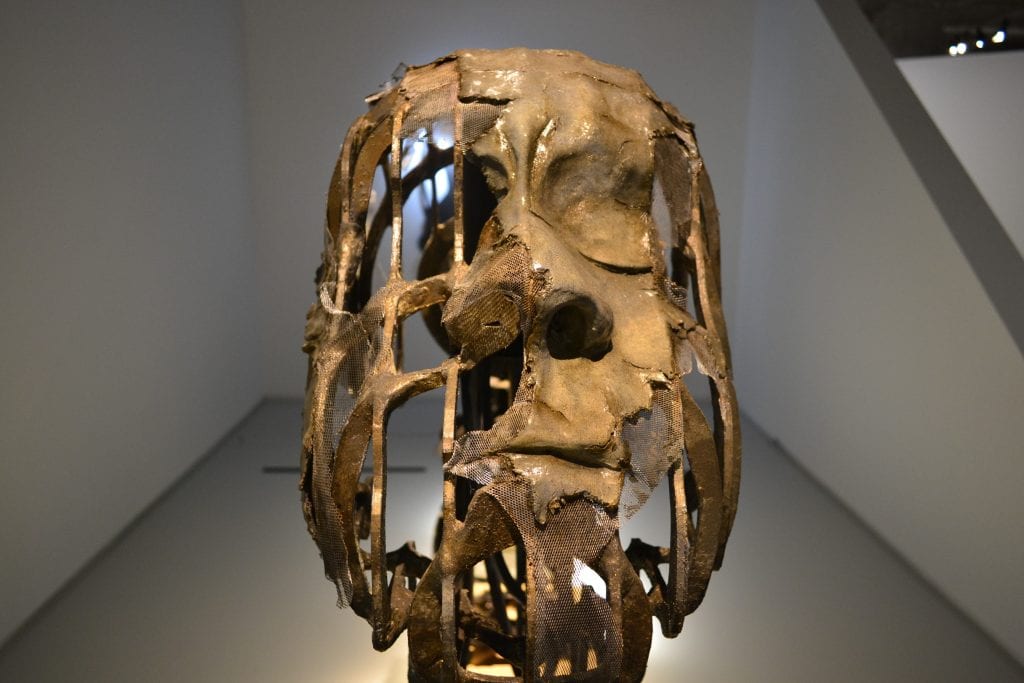 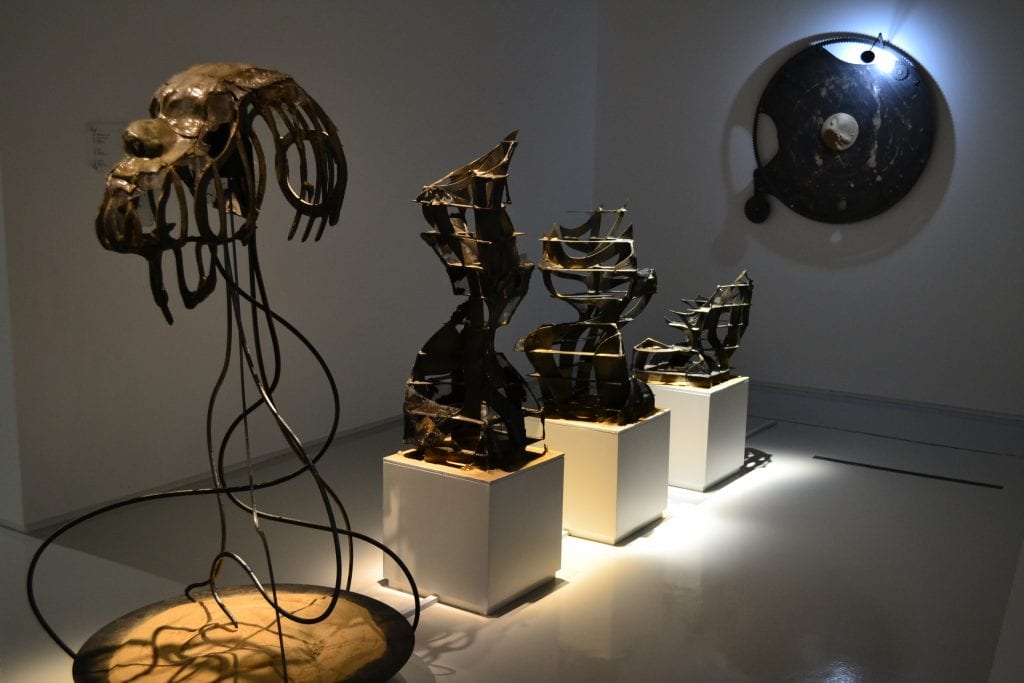 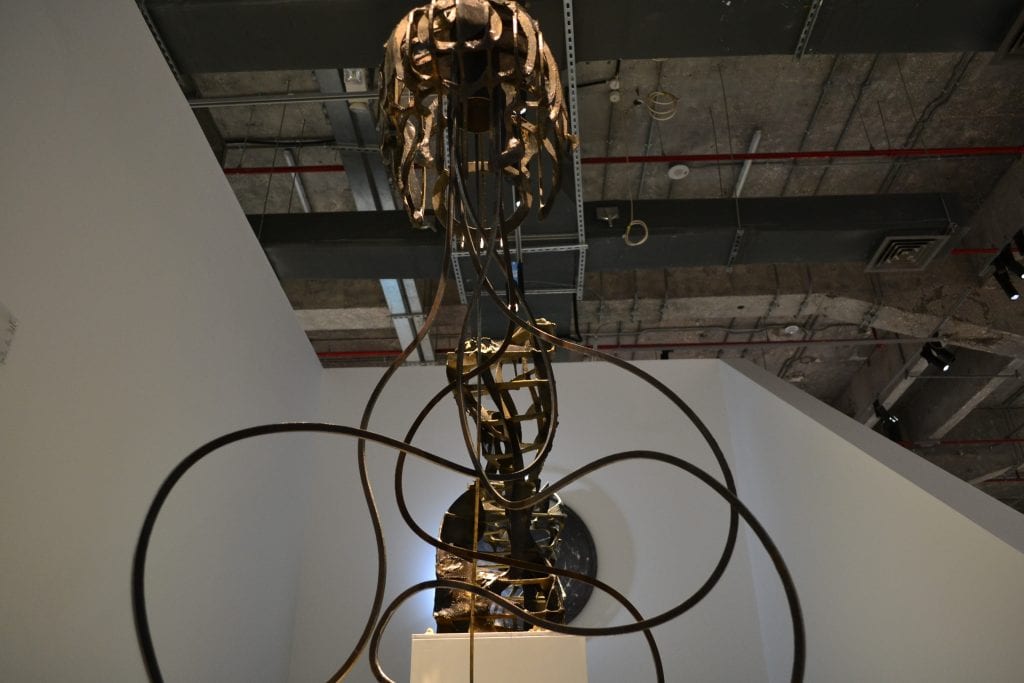 “There is a mechanical motor on a steel base that is layered with sand on top, affecting the continuous movement of sand, like the vertical installation which works on the same mechanical motor and is again covered with sand. The vertical component has a surprise element when a face is seen at one point of time and that is to symbolise my experience in the face of changing time,” explains Mohammed, who comes from an art lineage, he is the son of artist Faraj Daham, one of the well-known figures in the local as well as international art scenes.

While Mohammed is open to more interpretations to his installation, his thoughts he says is stemmed from the change that he sees in his home town. “The change that is bought about by mankind in the land of deserts, how he has conquered the land and waters. Even though mankind does conquer land and material, time is one factor he cannot have a control on and that is what the skull depicts,” he says.

Where does Mohammed see himself after a decade, in the face of this constant change?

And that is not something he is so sure of either, “I have ambitions that change over the course of a day. Every single month I have different aspirations. It could be in Qatar or outside Qatar but it will be in the field of architecture and art balancing them both as I have in this piece of sublime art.”

(To continue with more artists’ stories….) 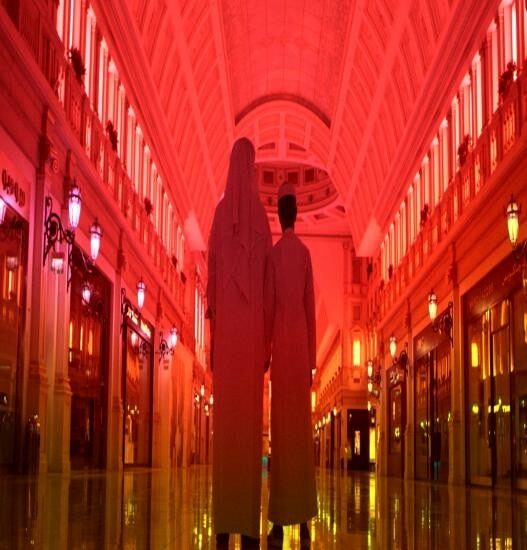 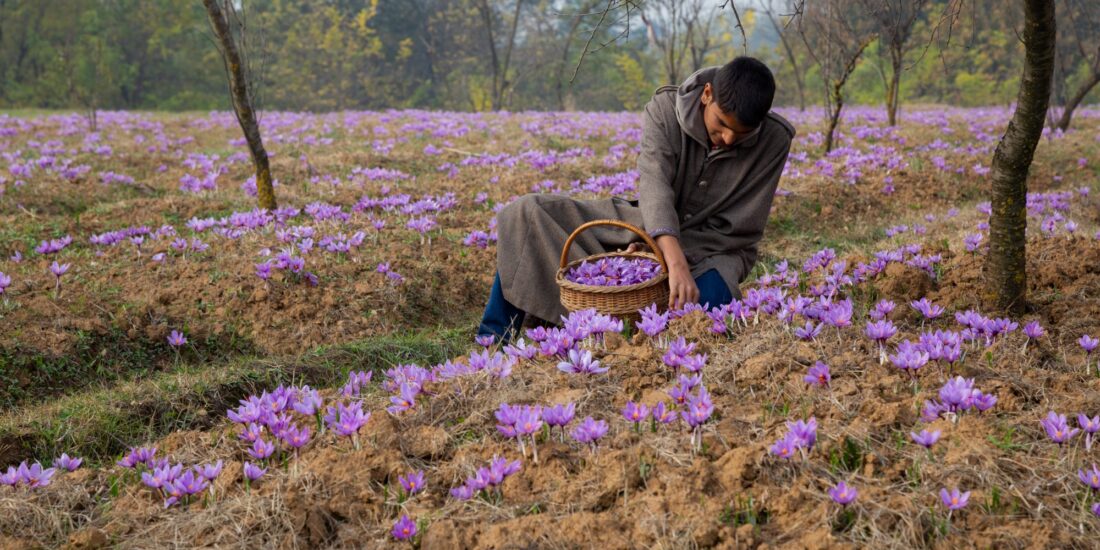 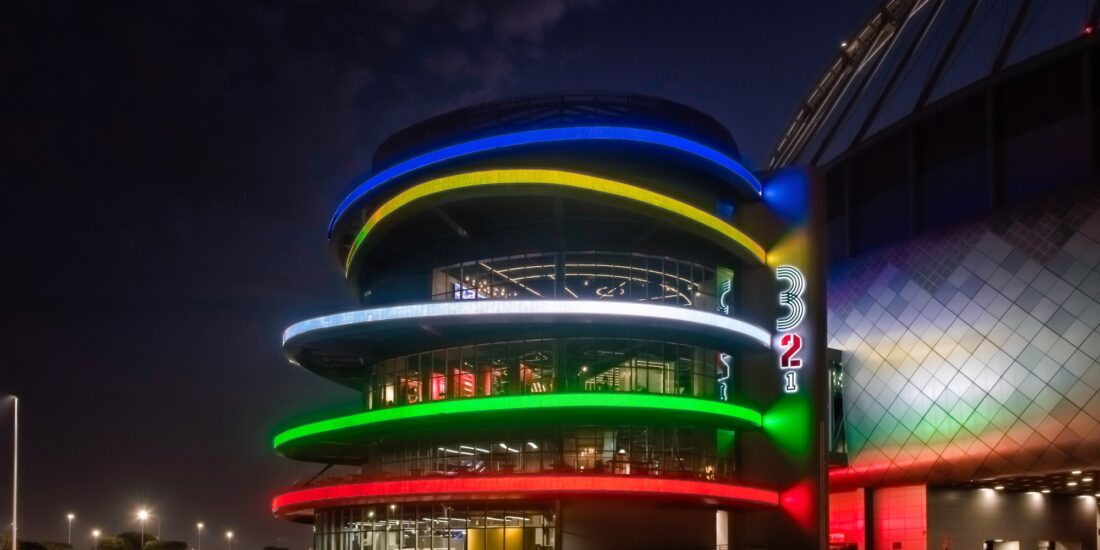