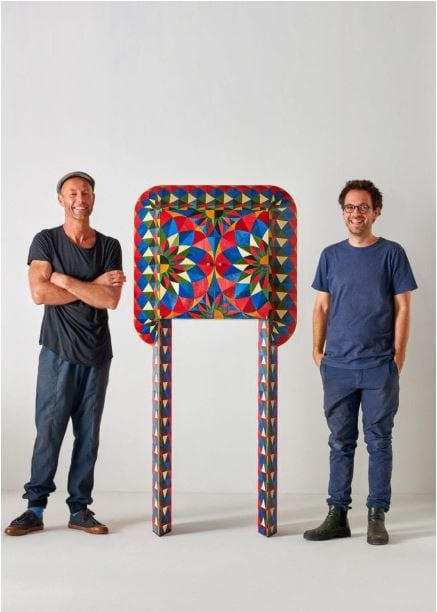 When tradition and innovation are combined, design duo Adam and Arthur’s statement objects represent the acme of collectible design. By Aarthi Sriram 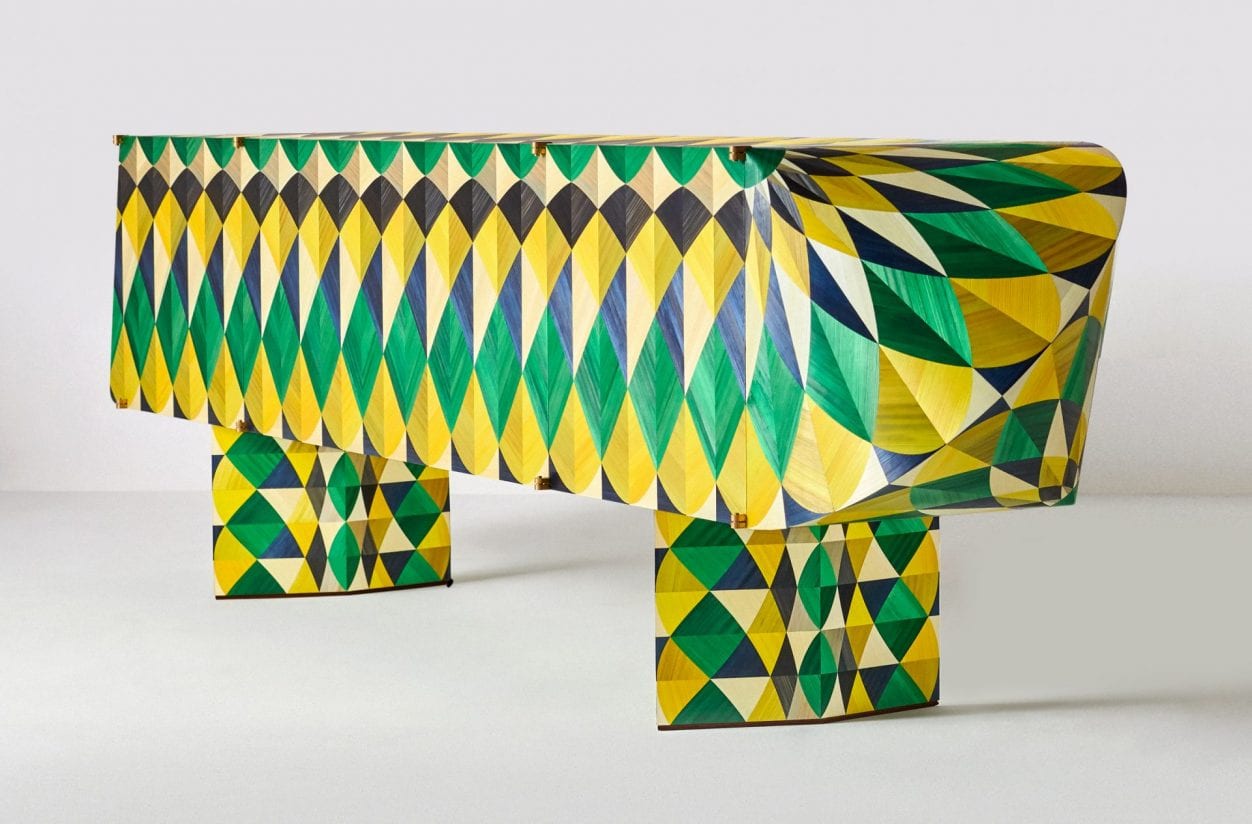 When Arthur Seigneur, a young French artisan newly arrived in Sydney and contacted leading-edge industrial designer Adam Goodrum in 2015 to ask if they might work together, neither of them could have predicted what would eventuate. But less than three years later, the Bloom cabinet, the first fruit of their collaborative endeavour as A&A, debuted to critical acclaim at the Milan Furniture Fair before being acquired by the National Gallery of Victoria (NGV). 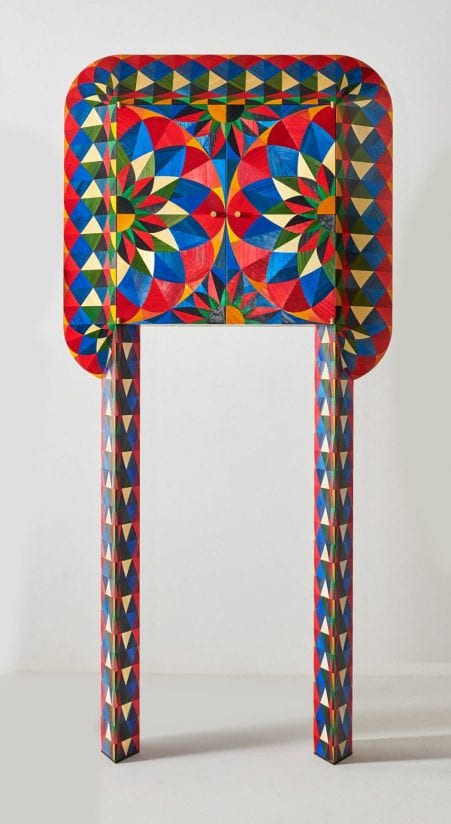 A stunning synthesis of design innovation and traditional craftsmanship, the unique work, made of oak and white maple, cloaks its handmade cabinetry behind two oversized doors that form a circle, 1400mm in diameter when closed. This provided the surface for the application of Arthur’s calling card, straw marquetry, or marqueterie de paille, employing more than 4000 slivers of subtly reflective rye straw imported from specialist producers in Burgundy and hand-dyed by the artisan himself in a range of custom hues. The result is a kaleidoscopic, mandala-like design, inspired by the curved symmetry of the lotus blossom, that seductively catches and throws light as the doors are opened and closed, or as the viewer moves around the cabinet. 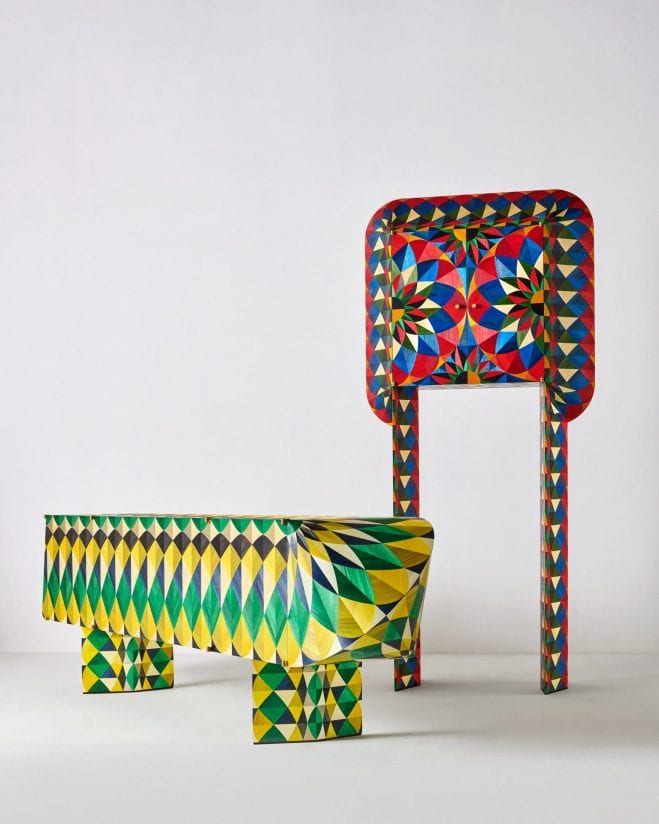 Straw marquetry is a painstaking technique similar to marquetry, which has traditionally utilised wood veneer (as well as materials such as shell and ivory) to decorate furniture and other objects. It emerged in Europe in the 17th century and went on to enjoy great esteem in France, especially under the reign of Louis XV (r.1715- 74). Straw marquetry experienced a revival in the early 20th century thanks to Art Deco luminaries such as André Groult, Jean Royère, and Jean Michel Frank, the latter of whom used it to decorate entire walls as well as items of furniture. Globally, there are only around twenty-five artisans trained to practice this intricate and exacting craft, and, to his knowledge, Arthur is the only one working in Australia. 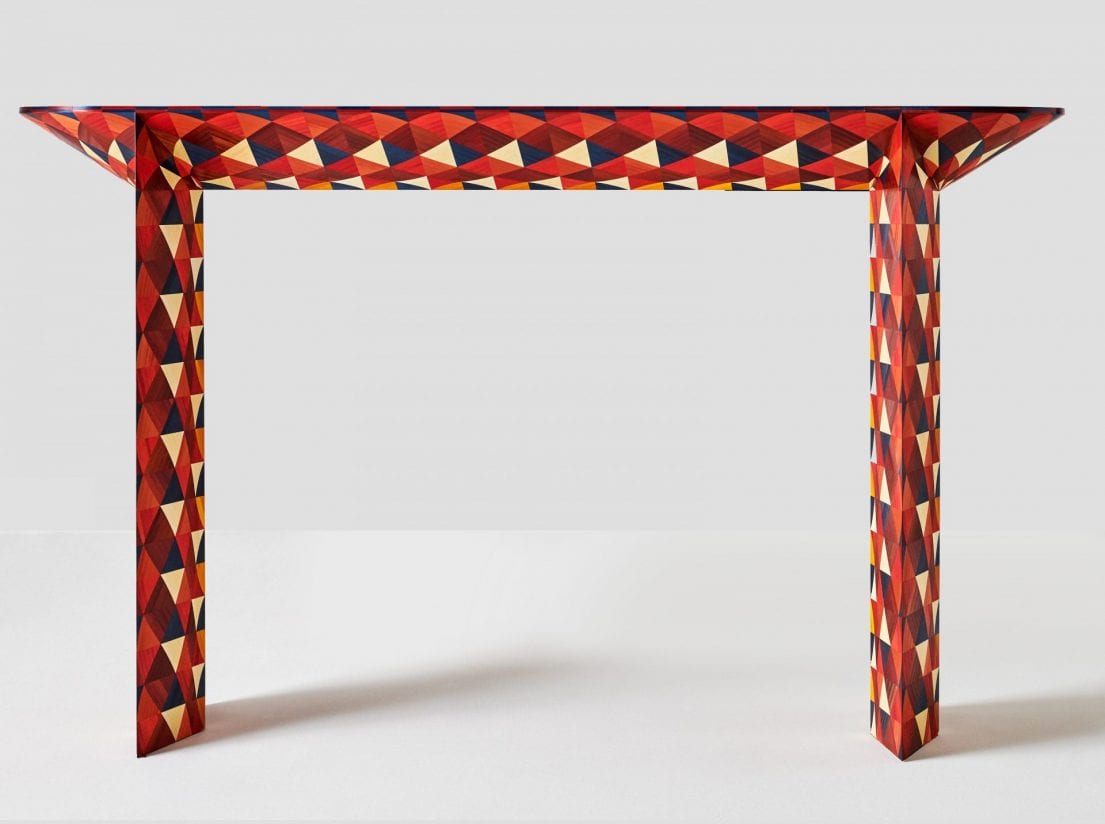 Now, on the occasion of A&A’s debut with Tolarno Galleries, the duo has produced three unique pieces of furniture that build on the creative insights gleaned from bringing Bloom to glorious life. Using just a scalpel, ruler, and wood glue, Arthur has decorated Talleo, a tallboy, an Archant, a console, and Longbow, a credenza, in a series of richly coloured geometric patterns that are themselves informed by the shape of each item. 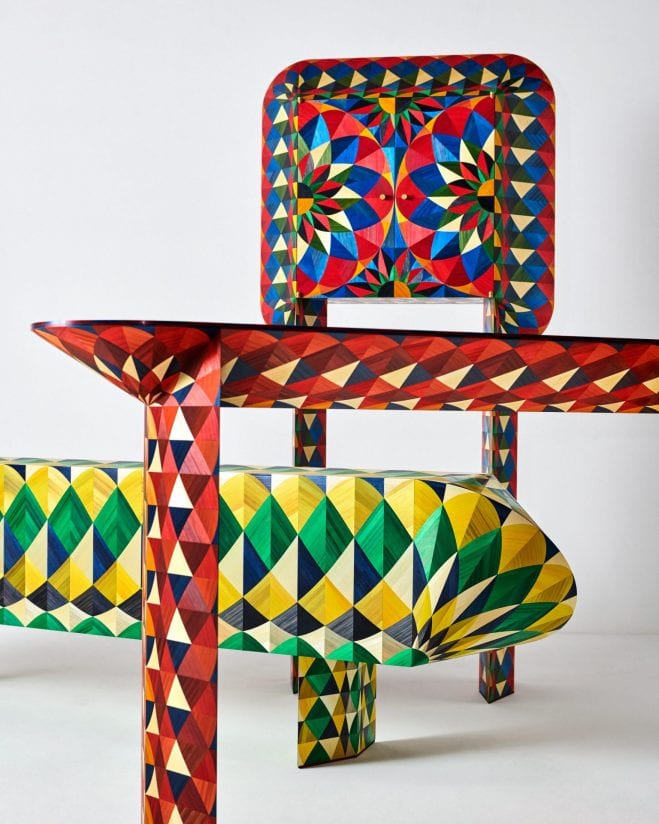 While Adam conceived the initial designs and patterns, they were finessed in dialogue with Arthur so as to maximize straw marquetry’s dazzling visual effects. The exhibition takes its title from the French parlour game of cadavre exquis, which was invented by the Surrealists in 1925. In the game, a player sketches a body part or other image on a piece of paper, before folding the paper to conceal what they’ve drawn and passing it on to the next player, and so on. The completed figures tend to be wildly inventive and frequently bizarre. 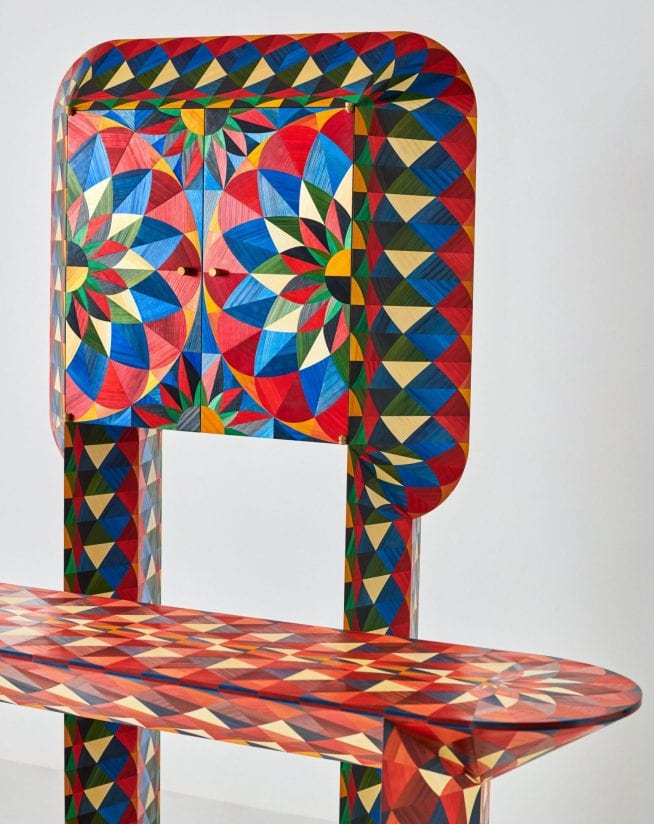 “The game relates to our process,” explains Adam. “I came up with the shape and pattern of these pieces and gave them to Arthur to finish. “Neither of us would have come up with these works independently, but together we’ve created something new and distinctive”, he adds.

Each piece has been entirely covered in straw marquetry, top to bottom, front to back – even the insides of the drawers and the diamond-shaped legs. Arthur has further exploited the material’s reflective properties by applying the ribbons of straw in varying and often contrasting directions, imbuing the surfaces with a dynamic textured quality. 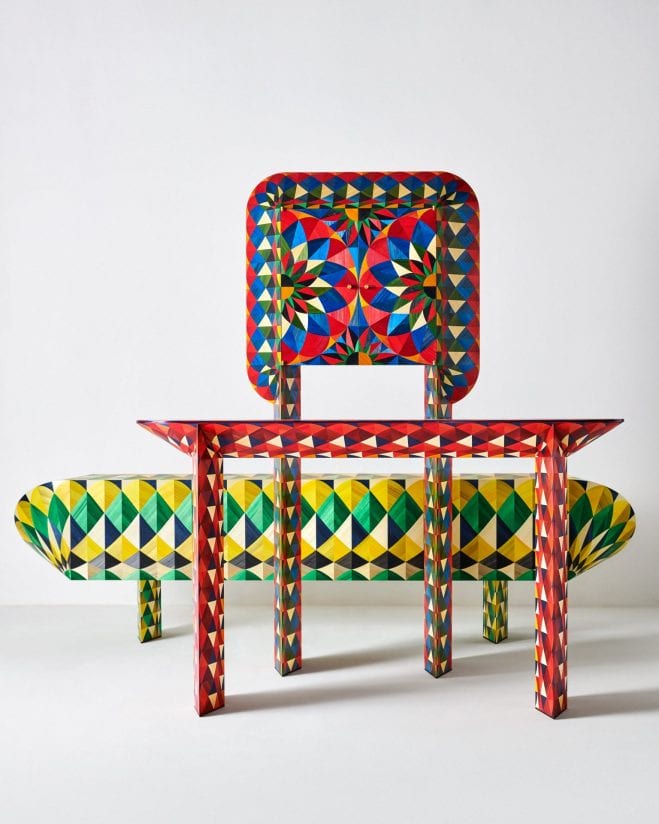 The audacious colour combinations add an extra dimension of visual delight. If the technique looks labor-intensive, that’s because it is. For complex designs, it can take Arthur many weeks to complete each work, including time spent dyeing the straw, splitting open each shoot, and flattening it in preparation for application.

“There’s a certain freedom to being a designer in Australia, compared to a place like France,” muses Adam. “We have a blank canvas to do almost anything.

By moving here, Arthur has the opportunity to evolve his craft in a way that’s unconventional. Other straw marquetry artisans are noticing, not least A&A’s penchant for using a brightly coloured straw. “They contact Arthur on social media and ask: ‘How did you do that?’ So our work is resonating on a number of levels.” For his part, Arthur is relishing the new direction he has taken since relocating to Australia. “At first I was more traditional. I remember looking at Adam’s colour schemes and thinking, it’s too much,” he says. “But now I’ve changed my mind.”

The collection is a part of Melbourne Design Week 2020, an initiative of the Victorian Government in collaboration with the National Gallery of Victoria, 12 – 22 March 2020.