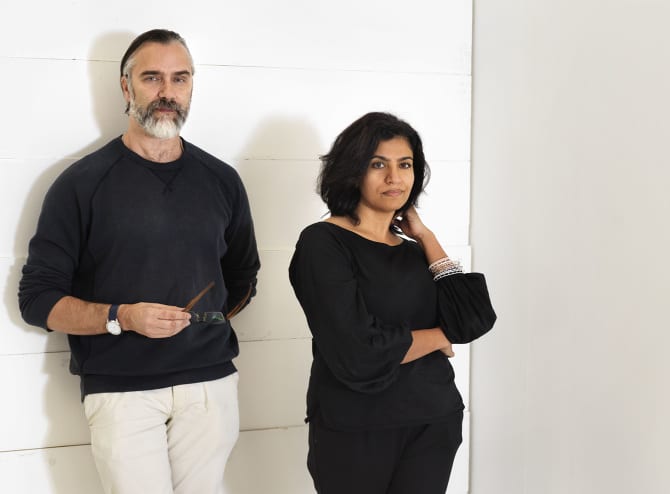 Conceptual Designs Waiting to be Realised

Dr. Thomas Modeen and Maysaa Al-Mumin churn out designs in jewellery and products, and are intrigued by the sensory nature of the products, but are yet to market them to the world. By Sindhu Nair

Follow Architects Independent on Instagram and you get a glimpse into their creativity. From home products, jewellery pieces to conceptual designs, the principals behind Architect Independent are relentlessly conceptualising, designing, giving the product form and function, testing and finally capturing it on the lens and then back to conceptualising another new product. That this Qatar-based architecture collective is founded by Dr. Thomas Modeen and Maysaa Al-Mumin, the former pursuing a career in teaching at the Virginia Commonwealth University in Qatar ,  and the later teaches at VCUQArts in the Foundation department,  and that their creative pursuit is unhindered by monetary expectations but is based purely on exploring aspects of engagement, sensorial constructs and researching the wide ambit of 3D printing, makes these quests in design even more captivating.

Their endeavour in design began in London where they were associated with their sister company, Independent Architects, an architecture and design firm, now run by Paul Brady and Eng Ling Ho. The husband and wife duo then moved to academia in Qatar and after a lull in their design phase, it spurted yet again though in a different direction from what it was involved in at the London firm. 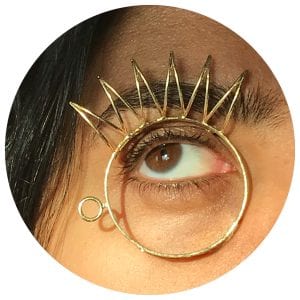 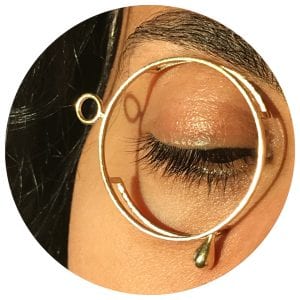 A set of monocles 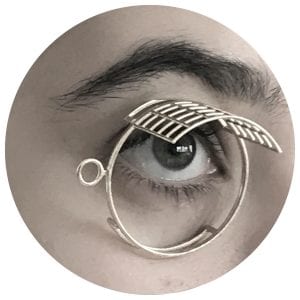 “It has changed from what we were doing in London. The work we did in London was of a commercial nature as we had to fund ourselves through the projects. Here, we have our work at the university and could afford to engage in conceptual designs and experimental work,” says Dr. Thomas Modeen.

Thomas has a keen interest in exploring 3D printing in various materials and in trying evolving technologies relating to architecture. He is also involved in various R&D ventures relating to the manufacturing and construction industries, specialising in the use of various CAD/CAM (Computer Aided Design/ Computer Aided Manufacturing) in the realisation of products, interiors, and architecture.

One of the works that keep showing up on the Instagram pages is the jewellery pieces with intricate patterns that catch the eye of any design-conscious person. 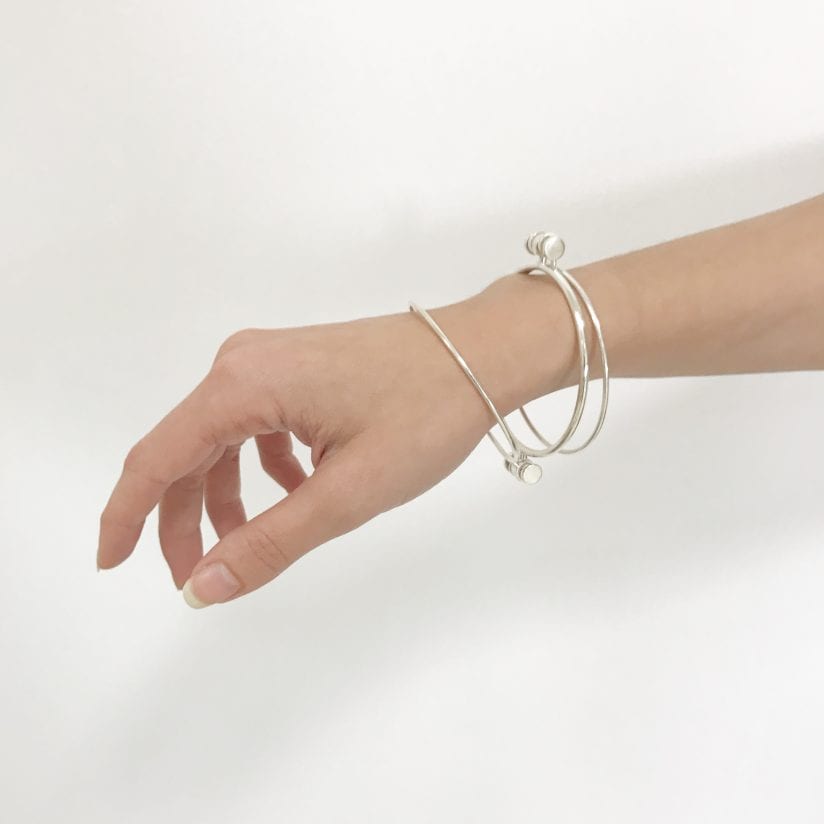 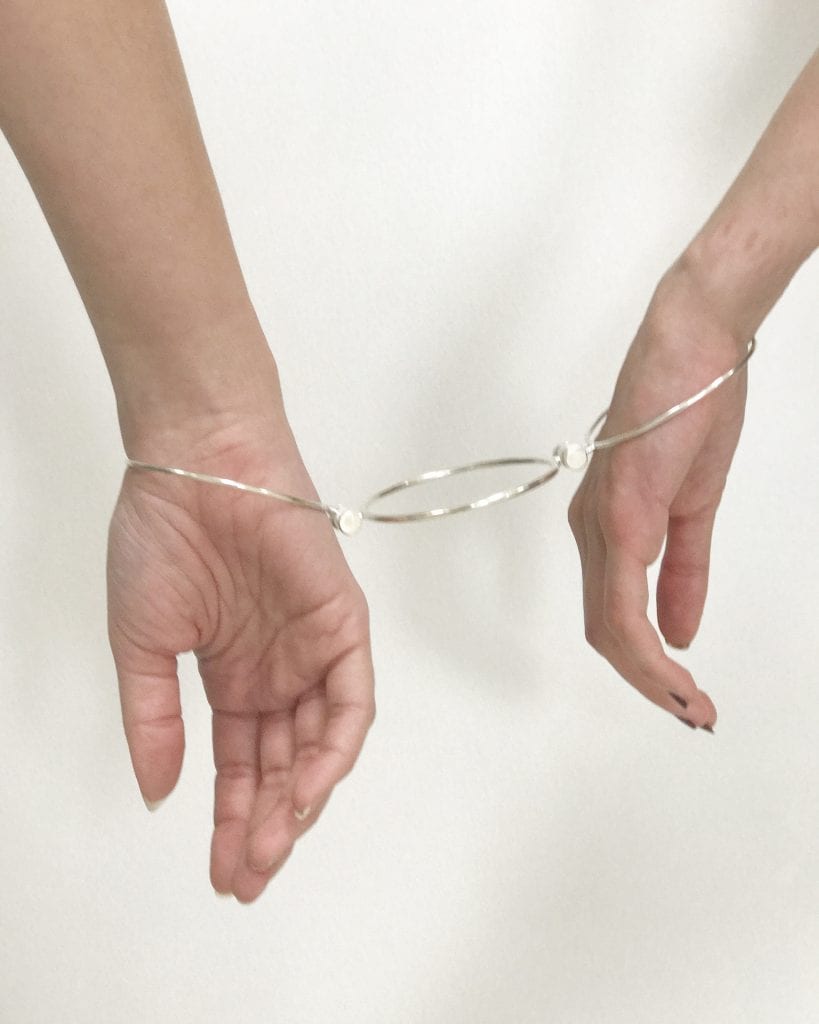 “The jewellery products are a result of much research,” says Thomas, “The designs are cast in plastic and then 3D printed to get the intricacy replicated in detail. They are 3D printed in wax and then made as a plaster mould into which you cast the metal. The advantage with 3D printing is that you create very intricate work and there are no visible joints when you work with it.”

A range of the products designed by the duo are available to see and explore from the Architects Independent website, from an egg cup to a scratch relief business card case, to oud burners and jewellery, but they cannot be ordered because they do not have a price tag. Thomas wants to take time before he commits to the marketing of these products.

It almost seems as if Thomas and Maysaa have devoted their entire time on conceptualising and creating products. Which makes us wonder if the firm is limiting itself to designing products? 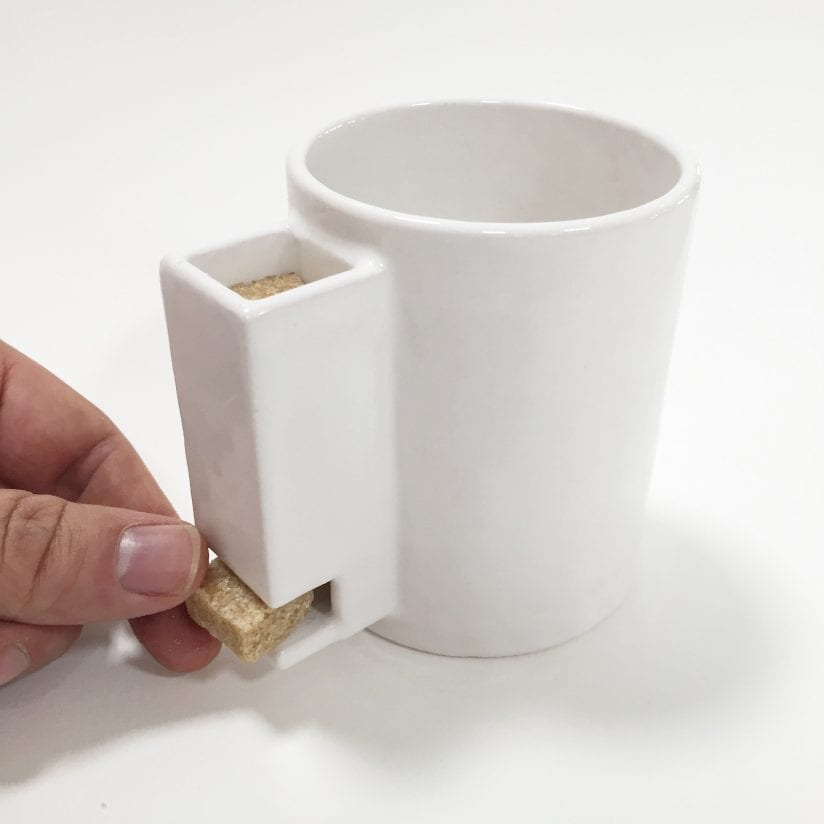 “I want to do it all, “says Thomas. “I have been doing printer designs, Maysaa has been using our designs in movie settings, we have numerous conceptual architectural works, realised through scale models. They are conceptual because they are catalysed by certain specific or local conditions.”

And that’s where the creativity shines. One of the things that has intrigued Thomas is the desalination process that goes on continuously making seawater usable for the water needs of the country. An energy-consuming process, which does not reduce the water usage in the country, reflects Thomas.

“It’s estimated that 99% of potable water in Qatar is desalinated sea water, a process that requires 5 litres of oil per cubic meter of treated water. Most desalination plants are located along the country’s west coast, resulting in the adjacent sea being approximately 30% more saline than the country’s east coast,” explains Thomas. “The Salt Tower is conceptualised to be placed by Qatar’s west coast, surrounded by a salt farm, which provides the raw material – the bricks – that make up the bulk of the Salt Tower’s walls. Here, however, the tectonic support is, in a sense, ‘reversed’, and is actually provided by the gridded ‘mortar’ that surrounds the hollows that support the salt bricks. The GRC (glass reinforced concrete) provides the reinforcement while the salt bricks fill the gap.”

Maintaining this wall of salt would require constant upkeep. The salt farm provides the material, but human labour would be needed to both fabricate the bricks and to patch the cavities resulting from seasonal rains and general erosion.

“The tower would act as a constant quantified reminder of the energy and effort required to provide us with one of our most basic needs. It would be a reminder of the perpetual process that is involved in providing for the most important amenity and might help us in containing any wastage too,” he says.

We would expect that Thomas takes these concepts to its final stage of closure, of finding ways to make them a reality, but that’s where this concept creator takes a step back. He is happy experimenting with his creative cells and is not entirely bothered about the recognition of the concept.

The next design that Thomas has conceptualised acknowledges the need for select nodes of permanence in a perpetually changing world.

“There is always an intuitive way of finding your way through your home town or the place where you have been living and working. A place that you visit could be some blocks from this home store that you have visited for years or it would be right across the library that you spent time when you were a kid. I found that this was somehow lacking in Doha. Everything changes so quickly,” he says. 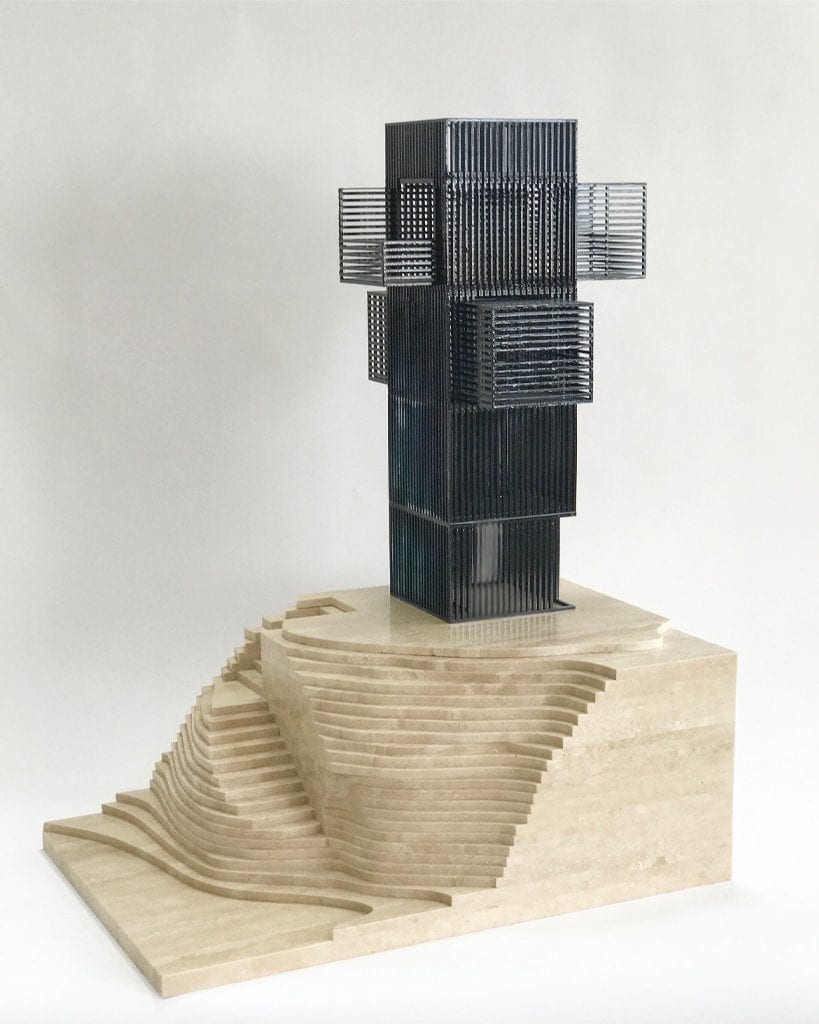 “The Weathered Tower, which stands on an unspecified rock in an undetermined desert within the GCC, would act as a ‘filter’ of the subtly abrasive but unrelenting dust and sand present at the setting, which would permeate and transcend through its ribbed torso, a slow and extended performance that would gradually begin to weather and wear off the tower’s various stratum of paint, layer by layer, revealing the green below the black, blue below the green, and the white core below the blue. This process would take years, decades, a century, to complete. The layers would reveal themselves unevenly, dependent on the whims of the prevalent winds and its changing environs. In time the tower’s appearance would reflect – celebrate – its age, and in its ever-morphing/ amended presence, become a connective link, a societal and cultural anchor, connecting generations.” 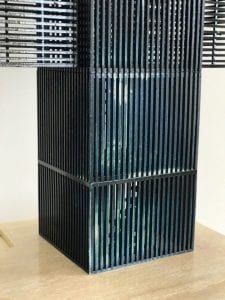 Like the Japanese lacquer boxes which are handed from generation to generation where the layer wears through to reveal the colours.

These subtle commentaries on urban interventions give life to Thomas and Maysaa’s design interventions. Some of them have been displayed at various exhibitions in Doha and one of the above concepts would soon find its way to another exhibition in the later half of the year.

Conceptual architecture is indeed a creative outlet but the success of the products designed can only be gauged when they are put to use by the customers on a daily basis and by realising how feasible it is to be produced on a larger scale.

And that is one step that Thomas is still not quite ready to take, as he is continuing the process of giving vent to his creative impulses, experimenting with ideas.

“Creating is keeping me busy, the drive is always to create,” says Thomas, “It is a hobby but an interest that is very time consuming and eventually I might scale it up, but right now I am happy.” 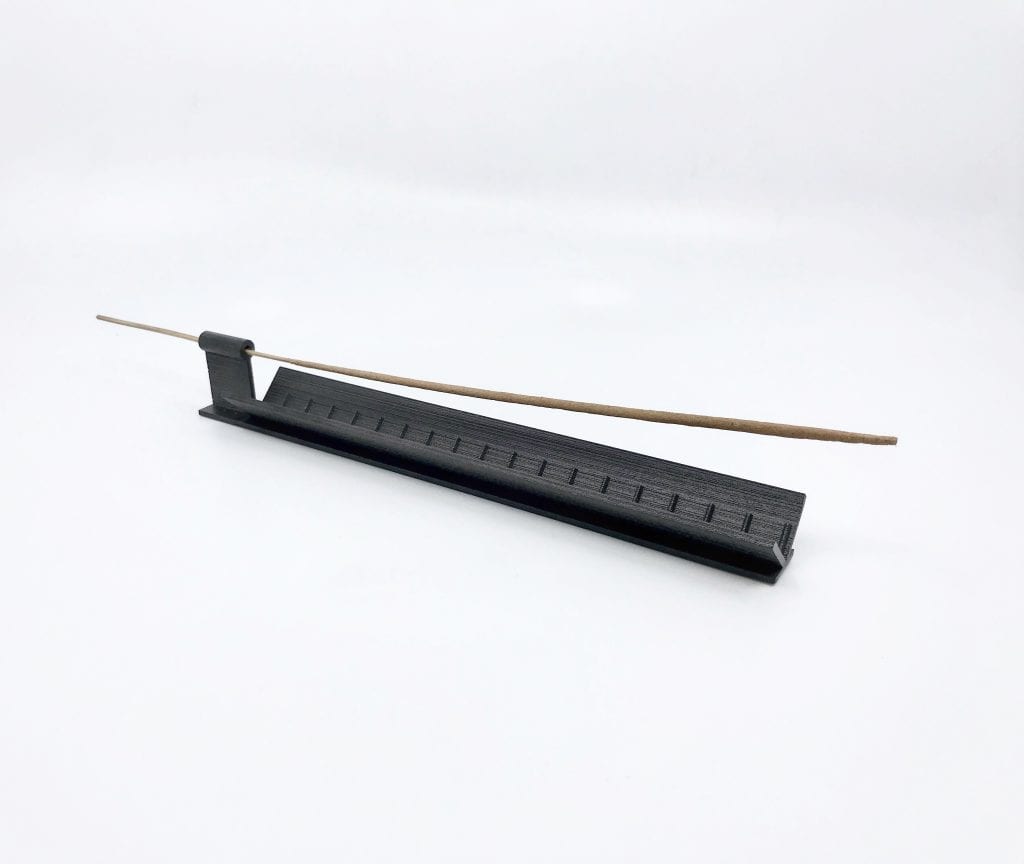 Monumental architecture, that we see now in Doha, is inspiring, agrees Thomas.

“But I would like to see some equally inspiring work on a residential level too, we don’t see any of such experimentation in that segment. They need to be better designed. Designing buildings that is reflective of the climate of the place, even after so the progressive researches that are being done on this field, is the need of the day.”

Does this lack of design solutions in residential architecture make Thomas aspire to tackle those issues?

“The design concepts of the Salt Tower and the Weathering Tower are a step in that direction,” Thomas concurs. 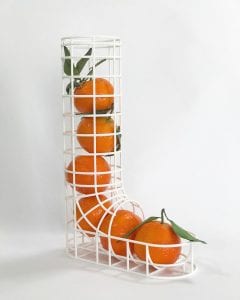 Work of certain architects have always intrigued Thomas, but his favorite varies from time to time. And at this point in time, it is Swiss Architect, Peter Zumthor, whose buildings are mysterious and enticing but show no signs of style or formal preconceptions.

“His concern is with context, experience, and materiality, not aesthetic. Perhaps this is his most significant contribution to architecture: a truly meaningful architecture of place and experience,” he says. “Tadao Ando, and Finnish architect Alvar Aalto have been equally inspiring,” he adds.

More than people, Thomas has been intrigued by rituals and ceremonies and how they have an effect on humans. He touches upon one of the theses by a postgraduate student, in which she interrogates the references, symbolism, and connotations of hair both in and out of, it’s natural setting. 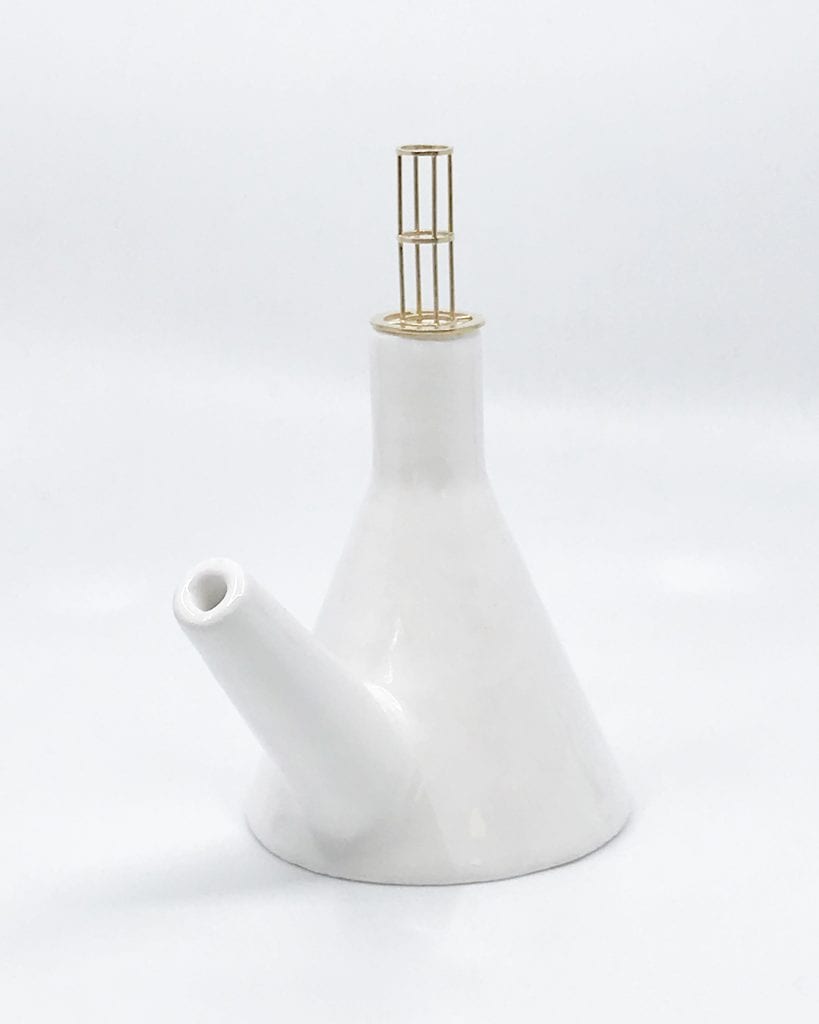 A soya Pitcher made with 3D printed porcelain and brass

“Another thesis project was on an invented ritual for a divorce ceremony, by reinventing the wedding ring, a ring with layers that could be dismantled after the divorce; a wedding dress that the groom and the bride would wear with 100 hundred buttons that could be taken off as a ritual during the divorce ceremony. That act of removing each layer from the relationship and finally ending it, seems to evoke a particular emotion apt for the ritual of divorce,” elucidates Thomas.

Combining rituals, with products, and customs with physical manifestations is what intrigues this architectural combine. The Three Muses bracelet and the Wishbone ring are a manifestation of these ideas from the above-mentioned thesis.

Thomas designs until he finds the right solutions. Solutions that have to be exposed to a larger audience to experiment and experience and for that we will have to wait till Thomas and Maysaa are convinced that the time to market to a niche audience is here.